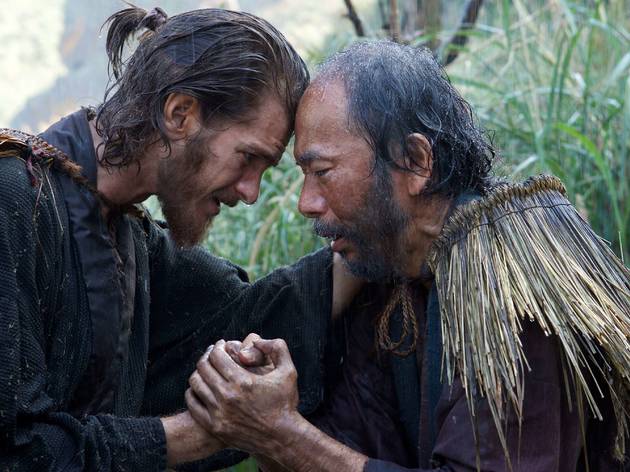 When Martin Scorsese puts away his strutting cocks – his raging bulls, comedy kings and Wall Street wolves – the results can be astounding. This quieter, lesser-seen director is the one who gave us 'The Last Temptation of Christ' (1988), the exquisite period piece 'The Age of Innocence' (1993) and now 'Silence', a furiously alive and concentrated parable about faith under fire set in seventeenth-century Japan that ranks among the greatest achievements of spiritually minded cinema.

Like much of Scorsese's work, 'Silence' is consumed with doubt, ego and sacrifice – this time, of black-robed Portuguese missionaries in a foreign land, one that ends up breaking them. But the refinement here is something else. Based on a 1966 novel by Shûsaku Endô, 'Silence' is a project Scorsese has obsessed with for close to 30 years, and you feel that: it looks and feels lean, with no wasted gestures, only inward agony. It’s his most mature movie, almost completely free of comic relief yet vibrating with passion and, provocatively, an apocalyptic sense of conviction burned to the ground.

Two bearded Jesuits, idealistic Rodrigues (Andrew Garfield, wet-eyed and soulful) and his sturdy counterpart, Garrpe (Adam Driver), make up an 'army of two', heading to a Japan shrouded in smoke and mystery. It’s partly the terrain of Scorsese’s beloved Akira Kurosawa – epics like 'Ran' and 'Throne of Blood' – and partly a natural paradise. (Cinematographer Rodrigo Prieto bathes the imagery in ashen grays and a rare, precious sunlight that struggles to penetrate the gloom.) The men seek their mentor, Ferreira (Liam Neeson), unheard of for years. Even as 'Silence' sets up its simple imbalance of power, between well-intentioned but alien invaders hoping to spread the word of Christ, local potentates who hunt them down as fugitives, and the frightened religious converts in the balance, you can feel it easing toward a larger showdown.

That clash is the one you’re waiting for, the one that turns 'Silence' into a powerful, all-time statement on the threatening power of colonisation. It comes after the central pair is dealt multiple setbacks and split in half. Even as Rodrigues languishes in an outdoor prison – there’s a strong whiff of 'Apocalypse Now' – Scorsese’s screenplay stresses unusual internal battles: the purring Japanese inquisitor, Inoue (the extraordinarily weird Issey Ogata), who sees in his captive a man worth psychologically snapping instead of martyring; and the weak local boatman, Kichijiro (Yôsuke Kubozuka), who pesters Rodrigues for an absolution he doesn’t deserve.

Is 'Silence' ultimately a compassionate film? Undeniably, but it also dares to expose cultural dividing lines. Scorsese has hit the rare heights of filmmakers like Ingmar Bergman and Carl Theodor Dreyer, artists who find in religion a battleground that leaves even the strongest in tatters, compromised and broken.