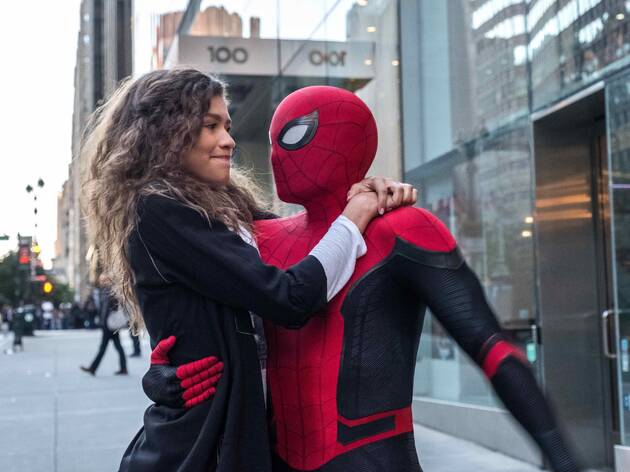 Awkward teenage energy is the secret weapon in Marvel's post-Avengers palate cleanser, one that strains to keep things light and fun.

‘I didn’t think I would have to save the world this summer,’ says a near-terrified Peter Parker (Tom Holland, still charmingly dorky) near the front end of ‘Spider-Man: Far from Home’. Little more than two months have passed since ‘Avengers: Endgame’ crushed it with three hours of intergalactic pain, not to mention last year’s superb animated ‘Spider-Man: Into the Spider-Verse’. Can’t Marvel give it a rest for a bit?

Well, no. This new movie is meta, irreverent and regularly a lot of fun, though it works best when it plays like a holiday from all the MCU seriousness. A blast of Whitney Houston’s ‘I Will Always Love You’ and a cheesy montage of fallen superheroes (it turns out to be a high-school AV club’s video tribute) brings us up to speed in a new post-‘Endgame’ world. Peter, meanwhile, a self-described ‘16-year-old kid from Queens,’ hopes to reveal his true feelings to MJ (Zendaya) while on a class trip in Europe.

As ‘Far from Home’ leans into this travelogue section, much of it shot on location in Europe, you wish it would remain a breezy teen comedy, one with a panicky best friend (Jacob Batalon), a neurotic chaperoning teacher (Martin Starr) and a handsome romantic competitor for MJ’s heart who’s actually named Brad (Remy Hii). But Samuel L Jackson’s glowering Nick Fury won’t be ghosted – he busts into the teen-centric flow like Jules from ‘Pulp Fiction’ – and the question of who will step into Tony Stark’s shoes is never far from hand, especially when a giant fire monster starts tearing apart Prague.

Director Jon Watts repeats a lot of the same moves as 2017’s amiable ‘Spider-Man: Homecoming’, with a hit rate that’s about the same. There’s another Ramones song on the soundtrack, and another chatty female AI for Peter to bond with (nowhere as cool as Jennifer Connelly was). Watts hopes to wear the spandex as loosely as possible: when Jake Gyllenhaal shows up as the fishbowl-helmeted Mysterio complete with lantern-jawed sincerity and a cape, you can sense there’s a joke afoot. As Sam Raimi proved with his definitive ‘Spider-Man’ outings, this is a franchise that works best when you bring out the playfulness. On those grounds, the emotionally exhausted Marvel faithful can treat ‘Far from Home’ like the selfie-laden escape it wants to be – and sometimes is.