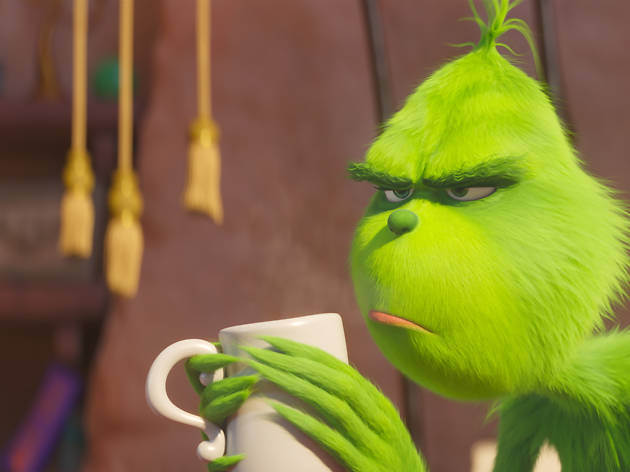 Dr. Seuss’s most beloved villain returns to the realm of animation (where he belongs), in an instantly forgettable holiday-themed diversion.

The Grinch is back, free of the grip of Jim Carrey, voiced by Benedict Cumberbatch and, in Grinch terms, a bit less grinchy (ungrinchy?) than you might expect. Unlike the 2000 live-action Carrey movie, this new spin on the Dr. Seuss tale is computer-animated by Illumination, the same studio behind ‘Sing’, ‘The Secret Life of Pets’ and the ‘Minions’ movies, so by design it feels a little closer to the slim, hand-drawn 1957 book that bore it. (The Grinch’s green color, meanwhile, has another source: the 1966 Chuck Jones cartoon that first brought the character to screen.)

British actor Cumberbatch plays the Grinch as a grouchy American, all prissy and nasal and mischievous, but with a sad, soft aspect too – a side of his character amusingly winked at in a scene where he plays ‘All By Myself’ at home on a huge organ. He’s a grump, of course, but this is the 21st century, so he’s a grump with issues and a bit of a backstory. There’s not much psychological exploration, though (fine by us); the film is mainly a series of slapstick episodes, not always neatly hung together, and with barely any memorable side characters. Even the Grinch himself fails to make a massive impact at times.

This new version features the voice of Pharrell Williams as the narrator, dipping in and out of Dr. Seuss’s warming rhymes. That binds to the film to its authentic source, but the gaps between the spoken verse still remind us that this is a slender story s-t-r-e-t-c-h-e-d into a feature. That said, it’s likable enough – short and snappy. ‘The Grinch’ should play well with little kids, and it has enough inbuilt seasonal cheer to semi-defrost the hearts of more demanding adult filmgoers.