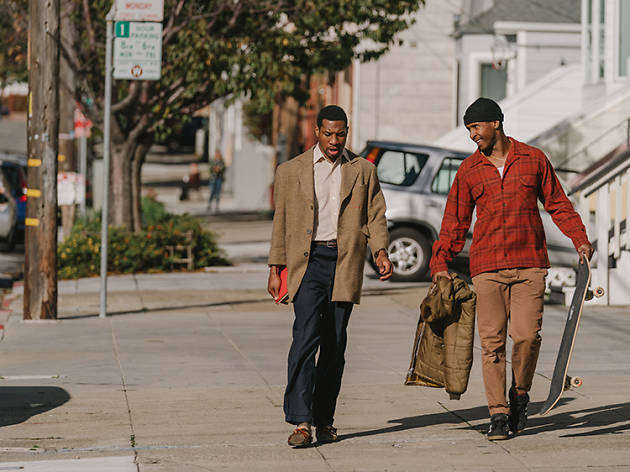 This glorious, humane movie starts with the city of San Francisco: famously a town of outsiders, freaks and countercultures. A touching, mournful comedy, it opens with the strange sight of two men on one skateboard, pumping their legs in unison like a set of oars. You’ll want to hop on board, and a random stranger has the same idea, chasing them for a bit. The energy of this introduction – the sight of them gliding along to composer Michael Nyman’s horns and strings – is electric. Even though the cards will be stacked against our two heroes, black and barely hanging on, you know this film will treat them royally.

The pair are Jimmie (soulful Jimmie Fails, whose actual life story contributes heavily to the film’s plot) and wannabe playwright Montgomery (Jonathan Majors, extraordinary). They’re two adult friends who share a passion for art. They draw, they paint, they wear pretty much the same clothes every day. What Jimmie really wants is a gorgeous Victorian house – a place in the city’s elegant Fillmore District where the sun blasts through huge bay windows on to creaky wooden floors. He has one in mind; it’s the same house he grew up in, before his dad was bought out years ago. Jimmie does unauthorised touch-ups on the building daily, to the chagrin of its grumbling white owners. But when the property must be vacated in an ugly inheritance split (the film has compassion for these heartbroken gentrifiers too), what’s to prevent Jimmie and Mont from moving in?

Director Joe Talbot, a longtime confidant of Fails’ who brings humour and sensitivity to the racially charged material, wants to tell more than just a squatter’s story, even though that’s the spine here. Something bigger is broken, dragging the proudly weird city down with it. Drunken tourists gawp at locals; the psychedelia of Jefferson Airplane’s ‘Somebody to Love’ is reduced to an earsplitting remix, and a ruthless estate agent moves in on the mansion. ‘This house... it’s what I do,’ says unemployed Jimmie in one of his many achingly vulnerable moments.

It’s not all tears, though. The film’s positivity comes from a personal sense of activism. For
the central duo, that means constantly making art: Mont breaks up a street fight to ‘direct’ the action (‘Remember Stanislavski,’ he tells them), and the film’s final stretch is consumed with putting on a play in the house’s living room. Here, there are similarities with ‘The Royal Tenenbaums’ in both content and mood, but there’s a dark streak too. Giving up is always just a single moment of weakness away. And a shot of a lonely man rowing through choppy waters under the Golden Gate Bridge sends things into the realm of pure poetry.

The Last Black Man in San Francisco is screening exclusively at the Dendy Newtown in Sydney, Australia, from October 1