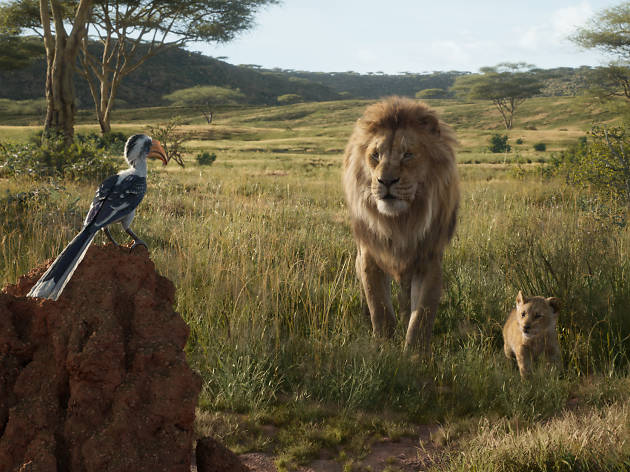 Disney's cherished 1994 animated adventure gets a high-tech, live-action sheen – and loses some heart in the process.

Something is off about this defiantly unmagical remake of ‘The Lion King’, a film that is both photorealistic – down to every artfully crafted lens flare and whisker on Simba’s chin – and about the furthest imaginable thing from real. It’ll either mildly disturb you or make you feel like your skin is on backwards. Granted, it’s still ‘The Lion King’, still a sturdy piece of ‘Hamlet’-derived musical theatre, only with 100 percent more Beyoncé, which is never a bad thing. But Disney’s animated movies have always been invitations to dream bigger than nature; even when you go to one of its theme parks, you submit to pretending. This new version is an invader of the real world, its characters like stuffed trophies mounted on the wall. They’re lifelike, yes, but somehow not alive.

Almost certainly, kids aren’t going to mind this, even if their imaginations will be a little short-changed. Set in one of Africa’s uncannier valleys, ‘The Lion King’ is still a yarn about talking and singing animals; no amount of digital work is going to change that. And vocal talent is what semi-saves this remake from ‘Jungle Book’ director Jon Favreau’s more computerised instincts. As the regal Mufasa, the sensible leader of the Pride Lands, rumbling James Earl Jones still has Darth Vader sonority on tap. He remembers to give an actual performance, as does Donald Glover, voicing the cub who would be king with increasing surety. But the rest of the cast is flattened into two-dimensional reductions: John Oliver’s flapping advisory hornbill (panicky), Billy Eichner’s slinky meerkat (bitchy) and Seth Rogen’s sputtering warthog (Seth Rogen-y).

The sincerity of ‘The Lion King’ – best expressed in the still-mighty ‘Can You Feel the Love Tonight’, strongly sung by Beyoncé and Glover – has aged better than any of Disney’s goofier asides, and this update is smart to stay out of the way of that showstopper, along with Hans Zimmer’s shimmering underscore. (Elton John’s aggressively upbeat new end-credits song, ‘Never Too Late’, won’t be entering the pantheon.) But it’s not long before the digital weirdness throws the mood out again. Always effortful and desperate to impress, ‘The Lion King’ may serve as a virtual substitute for going to the zoo, but let’s hope it never replaces such outings, nor its 1994 forebear, a passport to something far more sublime.