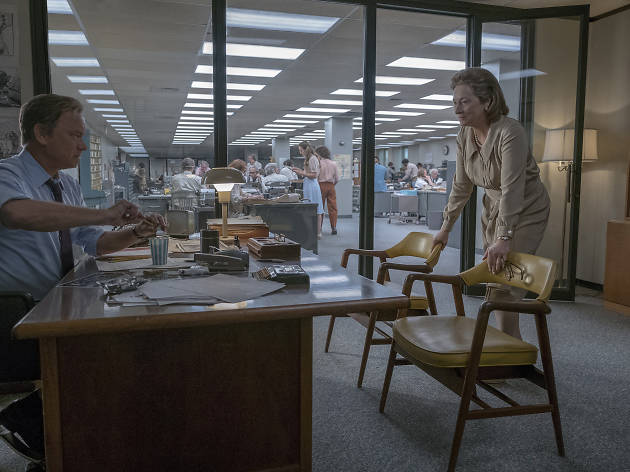 ‘However,’ Meryl Streep says, almost distractedly, a forefinger touching her temple – and that indecisive pause is the most exciting thing in the whole of ‘The Post’. Streep plays Washington Post publisher Katharine Graham – in retrospect, a giant of journalism – and even with the weight of printing the Pentagon Papers (and defending press freedom) bearing down on her, the actor adds layers of dithering doubt and insecurity to her portrayal. It’s a satisfying zig where others would have zagged and the first time Streep has given us a recognisable human being in a while. You’ll be thrilled to see the exquisite wobbler of ‘Sophie’s Choice’ back in action.

She deserves a movie that matches her level of complexity – maybe a pitch-black comedy in which the calculating Nixon administration is felled by Graham, a somewhat detached socialite who’d rather be hobnobbing with her fancy Beltway friends. (Graham grew into her confidence after these events.)

Dutifully organised via a clichéd script by Liz Hannah and Josh Singer, ‘The Post’ begins with Vietnam War choppers, a Creedence Clearwater Revival song (predictable) and the frowns of whistleblower Daniel Ellsberg (Matthew Rhys). Then it segues into idealistic barking by editor Ben Bradlee (Tom Hanks) and finally ends with the happily-ever-after falseness of the hulking presses churning to life.

Amazing as it is to say, director Steven Spielberg seems reticent to add any visual pizzazz to the film’s deadline mania. The images have cinematographer Janusz Kaminski’s typical blown-out glow – ‘history in the making,’ it screams – but too many of these sequences feel rote: bespectacled editors in shirtsleeves poring over documents while Bradlee’s wife (a wasted Sarah Paulson) heroically serves sandwiches.

‘Lincoln’ and ‘Bridge of Spies’ positively vibrated with fine-grain procedural density; here the filmmaker plays it too cool. And yet, Spielberg is sensitive to Graham’s exclusion, dwarfing her among the mansplainers until the tables turn and she’s beamed at, adoringly, by a throng of female hippies who gather on the Supreme Court steps. Never mind if that actually happened; for a second, the movie comes alive.

Undeniably, ‘The Post’ feels timely, but there’s a counter-argument to be made that, in our current era of fake news and easily swayed public opinion, it’s actually a dinosaur of a film – and not ‘Jurassic Park’. Thank God for the owners, it ultimately says, who sometimes do the right thing. That’s a perfectly fine idea, but our times could use something sharper.