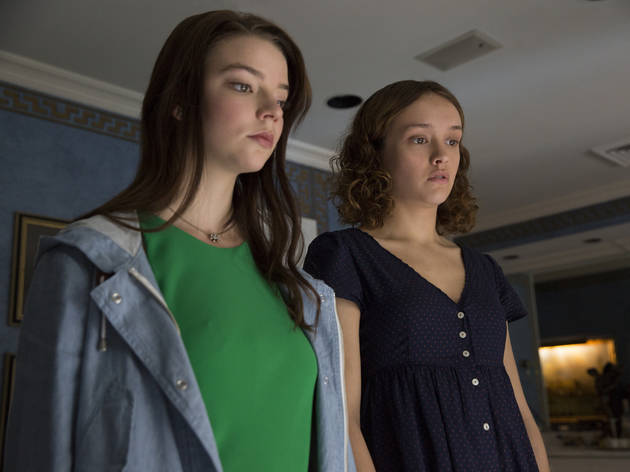 Money is the root of all evil, as this pitch-black psychodrama set among the affluent piles of Connecticut reminds us.

Amanda (Olivia Cooke), a teenager who says she can’t feel anything, killed her family’s pet horse in the middle of the night. Lily (Anya Taylor-Joy) just got kicked out of her elite boarding school for plagiarism. During listless scenes of exam prep, the two frenemies hatch a scheme to murder Lily’s stepdad, an arrogant juicer who can’t stand the sight of either of them. 'Thoroughbreds' plunges you into an ice-cold bath of amorality, but debuting writer-director Cory Finley has such a command of details – the perfectly soigné clothes and hairdos, the lavish Connecticut living rooms and attentive gardening staffs – that you’ll laugh your way through the shivers.

It’s a movie that vibrates with unease, balancing the coolness of its two leads (both superb) against a jittery percussion score by Erik Friedlander and lengthy tracking shots that wouldn’t feel out of place in Overlook Hotel from 'The Shining’. (You can call 'Thoroughbreds' a horror film, but it’s the horror of having too much money and a poorly developed sense of ethics.) Meanness has long held a cherished place in teen comedies but rarely as the motivating force of our ostensible heroes. Something about 'Thoroughbreds' feels especially current; if you’ve been returning to 'American Psycho' lately, here’s an update.

For all his confidence, Finley has room to grow. He loves his impeccably tailored beasts too much to write them a proper ending. When this one sneaks up on you, it’s forced. But the film clears a more impressive hurdle: It never apologises, never succumbs to correcting the uncorrectable. 'Thoroughbreds' features the late Anton Yelchin’s final performance as a drug dealer out of his depth. Amazingly, he’s the soul of the movie because everyone around him is so soulless, their damages are better hidden.