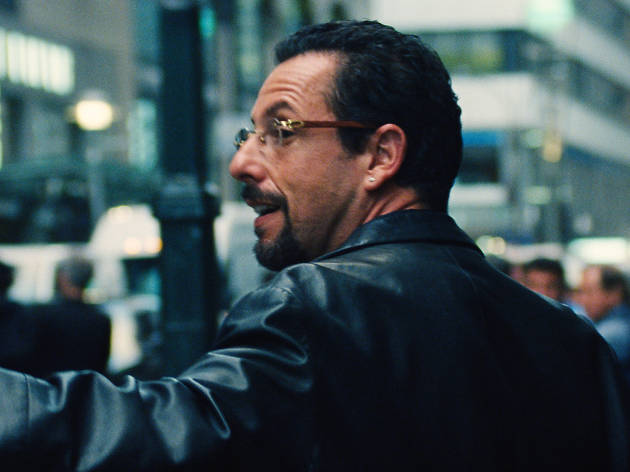 Josh and Benny Safdie, the indie filmmaking brothers whose New York City movies shudder with attitude, tell fast and grubby stories that harken back to the 1970s, when Sidney Lumet ruled sets. Their vigor is an instant rush: why creep a camera down a hallway when you can fling it behind equally unhinged characters? In ‘Heaven Knows What’, the Safdies turned uptown heroin junkies into wild, unkempt angels. Then, in ‘Good Time’, they gave Robert Pattinson all the confusion he could handle as a Pacino-like Queens hustler out of his depth. There’s no nostalgia to these films, no cuteness, only the mania of urban survival, improvised on the fly with a side of trash talk.

‘Uncut Gems’, the Safdies’ electrifying and abrasive latest drama, flirts with becoming a headache. (For some, it will feel like more than flirting.) But the film gets closer than the brothers ever have to developing a genuine affection for their various schemers, and that makes all the difference. Tenaciously, it follows a week in the 2012 life of a fly-by-the-seat-of-his-pants Diamond District dealer, Howard Ratner (Adam Sandler, channeling his obnoxiousness into something magically right, even moving). You may be overwhelmed by the Safdies’s spiky sound design – filled with yelling, sports betting, the jewelry shop’s constantly buzzing security door and an overcaffeinated, Tangerine Dream–like synth score – but Howard thrives in this chaos. It’s his normal.

Beyond his bling salesmanship, Howard dreams of a big score, which arrives by messenger from Ethiopia: a gleaming chunk of opal-encrusted rock which he hopes to auction off for a fortune. (It’s ‘real old-school Middle-earth shit’, he tells the hypnotized NBA star Kevin Garnett, playing himself with self-deprecating charm.) The various whereabouts of this stone will become a plot spine for ‘Uncut Gems’, but that’s just an excuse to ping-pong Howard between a kaleidoscopic cross-section of sharply etched neurotics: pawnshop kibitzers, menacing debt collectors (led by a spookily intense Eric Bogosian), a semi-estranged wife (Idina Menzel, seeping fury from every pore) and a brassy mistress, also his shop’s counter clerk, who may be falling in love with him (Julia Fox, making a stellar debut).

Gamblers at heart, the Safdies have a palpable love of gamesmanship, of arguments pushed to the brink, verbal beatdowns and courtside chatter. (Gifted cinematographer Darius Khondji, a master of reflections, gives ‘Uncut Gems’ a sheen that visually counterbalances.) Something else is going on here, too: a lovably pronounced American Jewishness in terms of tone and touchstones, from Billy Joel’s showbizzy ‘The Stranger’, heard during a car ride back to Long Island, to a family’s Passover seder rife with marital tensions and kids running around searching for the afikomen. This was the environment in which the Safdies grew up; their film isn’t merely an outstanding portrait of a charming fate-tempter who goes a bit too far, but a kind of autobiography (as was their 2009 breakthrough, ‘Daddy Longlegs’). It’s made with so much love, care and enthusiasm – plus no small amount of risk – you thrill to think that they’re just getting started.