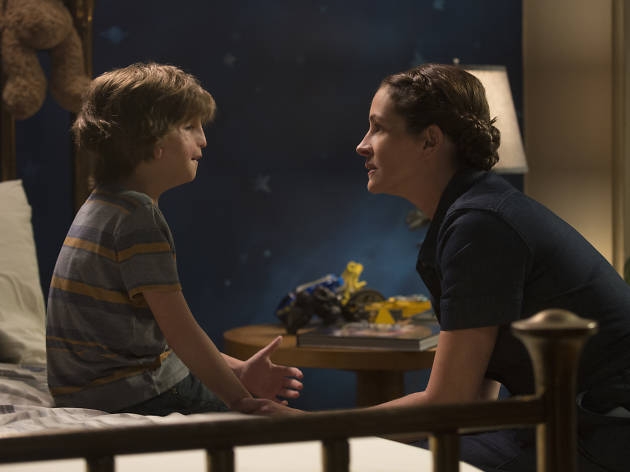 A child grapples with the way he looks—and those around him do some serious soul-searching—in a graceful drama that's engaged with ethical questions.

Children don’t get to decide how pretty they are when they’re born, yet how they behave determines, to a large degree, how beautiful they become. So it goes in the sincere, unusually thoughtful Wonder, in which two unfairly attractive parents (Julia Roberts and Owen Wilson) bolster the confidence of their young son, Auggie (Room’s Jacob Tremblay, the real deal), born with a facial deformity that even his active imagination can’t fully overcome. Auggie, a budding science whiz and Star Wars obsessive, is set to start private middle school, a shift that requires him to remove the astronaut helmet he’s worn as a barrier against shocked stares. His misadventures among his peers sometimes get rough, but director Stephen Chbosky (maker of 2012’s empathic The Perks of Being a Wallflower) is smart enough to limit this scenario’s mush to a minimum, instead shifting his focus to the people around Auggie who need to evolve.

R. J. Palacio’s novel on which the film is based is beloved by young people; it’s even taught in schools as a fair-minded entryway into social interaction. Although the film takes place in a fantasy version of brownstone Brooklyn, it’s more cutting than the book, especially for the way it shuns the concept of a star vehicle and sharpens the material into a forum for several moments of guilt. Auggie’s new friend, Jack (Noah Jupe), a scholarship kid, grapples with peer pressure and the effects of some casually cruel language he unleashes. Auggie’s adolescent older sister (Izabela Vidovic, superb) aches from a perennial lack of attention; the movie delves into her budding identity as she steps out of the shadow of her brother but also suffers for it. Bullies and frenemies don’t get served so much as given quiet moments to confront their own mistakes. Choose kind (as opposed to right) has become something of a tagline for Palacio’s book—and the movie as well—but that axiom is an oversimplification of the ambition on display here. These kids are choosing right, even if it takes them a while to get there.