The evolution of Chris: from Christine And The Queens to her biggest London gig

It’s eight months since Christine And The Queens became Chris. Isabelle Aron meets the endlessly reinventive pop star as she gears up to headline All Points East

Are we fuckable or not? That’s the big question.’ Chris, formerly Christine And The Queens, is eating breakfast in the Riding House Café, off Oxford Street, and talking about the reaction she got when she unveiled her new identity last September. She had lost 16 characters from her name and gained a change of sound from synth-pop to something bolder, funkier, more in-your-face. The first track of her new album, ‘Chris’, opened with a joyful scream.

All anyone wanted to talk about, though? How she’d cut her long brown hair into a short crop. ‘I’m like: don’t you want to ask me if I wrote the track first? And the question of fuckability later?’ she says. Dramatic pause. ‘Or never.’

The 30-year-old singer, writer and producer from Nantes is known for creating music that makes you want to dance – whether it’s an ethereally melancholy ballad or a G-funk-inspired banger. Her music’s multilingual too, mixing French and English. There’s even some (rude) Spanish words on that self-titled record, which is laced with stories of tumultuous desire.

‘Chris is me without any form of apology’

She is also known for reinventing herself. First as Christine And The Queens: a representation of her own self-acceptance in slick suits and shiny brogues. And more recently as Chris: someone tougher, bolder, more macho, more lusty. ‘In my love life, I’m like: What would Chris do?’ she says. ‘She would just go and ring at the door!’

These transformations aren’t stage personas – they’re a way for her to feel empowered. ‘I like the mess it creates,’ she says. ‘I’d rather be messy than trapped. It’s me without any form of apology, and I apologise a lot in real life.’ (It’s true, she keeps saying sorry for eating breakfast as we talk.)

Ten years ago Héloïse Letissier became Christine. The story of that creation sounds like a modern-day fairytale, but she swears it’s true. She had been kicked out of drama school for wanting to stage a play, something only the men on the course were allowed to do. ‘I was 20 and I didn’t know I could experience such blatant sexism,’ she says, taking a bite of her fried egg. ‘I was really down, and I thought: Where do I feel comfortable?’ The answer was London, a place she had always felt was a ‘safe space’ when visiting with her dad (a lecturer in English: he still checks her lyrics for mistakes). She picked up a copy of Time Out – another detail that sounds made up but is true, honest – found a night at Madame Jojo’s in Soho, and went to see her first proper drag show.

‘I was miserable and I looked like shit,’ she says. ‘I have expressive skin. When I’m sad I get rashes. I was this screw-faced young woman looking lost.’

‘I can be Chris and I can be a woman. It’s as if there’s only one way to be feminine’

So there she was: in London, in a club, covered in a rash, looking distraught, when… ‘These drag queens came up to me and were like, “Are you okay?”’ she says. Like fairy godmothers only with better contour, the queens spent two weeks looking after Chris, helping her work out who she wanted to be. Something clicked. She started writing songs as Christine And The Queens. A lot has happened since then. Chris’s album ‘Chaleur Humaine’ was the best-selling UK debut of 2016. She played her first Glastonbury the day after Brexit, and managed to channel the intense mood of the crowd in a way that other performers might have rejected. ‘I started to do absurd things like fighting the rain,’ she says. ‘It felt like a moment to let your imagination contradict what could be happening.’

She’s twice been nominated for International Female Solo Artist at the Brits, a rare achievement for a French artist in a category usually dominated by US and Anglophone megastars. She was even invited to write a song for Rihanna. ‘It was about sending nudes,’ says Chris. But the Barbadian star turned it down. ‘I think it was because it was really sad, depressing and feeble,’ she says. ‘She was too fierce for it. In a way the rejection was validating: reject me, I’m not worthy!’

Ri might have flirted with working with Chris, but her proper celebrity admirer is Elton John. He sends her emails of encouragement from his iPad. And Madonna – one of Chris’s idols – brought her out on stage in Paris in 2015 for a performance that involved Madge spanking her in front of the crowd. ‘It was the best sexual experience I’ve ever had!’ says Chris. ‘She’s powerful – she’s like: I’m going to eat you, and you, and you. I’m going to have sex with you. And people are like: Yeah! Then she called me “Christina”. It was slightly shady, but I loved it. It’s like, thank you, punish me more!’

Performing has always been a huge deal for Chris. Her shows are theatrical; choreographed in a way that goes way further than most pop routines. You might see her wrestling an invisible figure in a river or flexing her muscles on some scaffolding. ‘Someone told me that my new tour is like a weird Broadway show,’ she laughs.

Chris will be bringing her blend of pop, theatre and contemporary dance to All Points East in Victoria Park in just a few weeks – her biggest UK headline gig so far. ‘The tour sometimes calls for being really attentive and silent but it’s still a pop show,’ she explains. ‘It’s this in-between thing and in London people really get it.’ When she performed the show in France, it wasn’t quite the same. ‘They were like, should we clap?’ It’s not the only time she’s felt misunderstood in her native country. When she returned as Chris, the French media were puzzled. ‘I was asked too many times whether I was transitioning,’ she says. ‘I can be Chris and I can be a woman. It’s as if there’s only one way to be feminine.’ She says French magazines psychoanalysed her haircut: ‘“She’s getting rid of her will to bear a child.” I was like, it’s 2019. Are you fucking mad?’

Still, Chris is hopeful that conversations around gender and sexuality are becoming more open. It’s something she has noticed when talking about her identity as a pansexual woman. ‘Between the first and the second record, I feel the difference,’ she says, explaining that when she released her debut album in 2014, she mentioned her sexuality and people thought she’d invented the word ‘pansexual’. But she also worries about LGBT+ culture getting co-opted by corporations. ‘Sometimes queer is just digested in a capitalist perspective,’ she says. ‘Like “Ten Queer Artists to Watch” and you’re like, actually, that’s reduced it again, when you just want to express your freedom.’ When ‘Chris’ was released, some people congratulated her on what they saw as a slick marketing campaign, rather than an expression of who she is. ‘It’s been my life for ever. I’m talking about it because I don’t want to hide it,’ she says.

‘I feel like I’m slaying when I’m on stage: I need it’

Her openness is having an impact. Chris says she gets letters, mostly from young girls, thanking her. ‘They say: “You gave me the audacity to be empowered in my sexuality, to embrace that thing I didn’t want to embrace,”’ she says. ‘That’s when you’re like, oh wow, this is real. It resonates.’

Despite this, she has no interest in becoming a spokesperson for her identity. In fact, it seems she doesn’t take herself that seriously. At one point she starts to tell me ‘A great record is like a journey…’, before laughing at herself – ‘I want to slap myself. I’m sorry.’ At another she switches from talking earnestly about the state of pop music – ‘I’m fascinated by songs that are like hook, hook, hook’ – to pretending to be a fish (a contender for her next reinvention, apparently).

It’s why Chris is the pop star we need right now. Yes, she blurs the lines of femininity, creates a dialogue around sexuality and refuses to be categorised – but it’s more than that. It’s her energy. On stage she leaps, she spins, she sweats, she takes you out of your comfort zone. She’s an explosion of weird fun. If you go to All Points East she’ll drag you out of the gloom of politics and climate change and into her safe space with unstoppable force. ‘Every time I’m sad I’m like, I can’t believe I get to be Chris,’ she says. ‘I feel like I’m slaying when I’m on stage: I need it.’ Right now, we need it too. 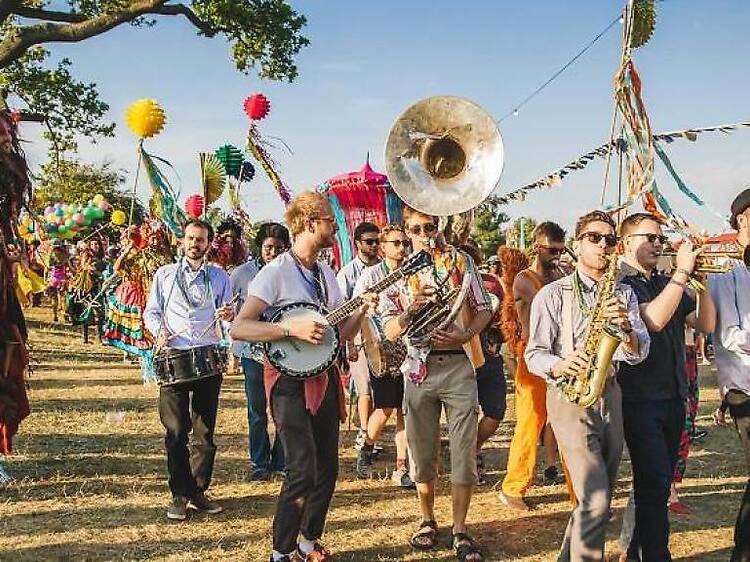