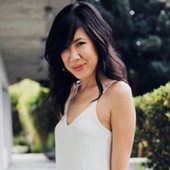 If you’re on TikTok, chances are you’ve come across one of Joanne Lee Molinaro’s beautifully produced, brutally honest videos, in which she shares moving stories about the immigrant experience, heartbreak and identity – all while demonstrating how to prepare gochujang pasta or kimchi fried rice.

Better known as the Korean Vegan to her followers, Molinaro’s unique style of food blogging is what makes her one of social media’s most extraordinary content creators. It’s even helped her to launch a debut cookbook and memoir, The Korean Vegan: Reflections and Recipes From Omma’s Kitchen, out now.

But Molinaro wasn’t always the Korean Vegan we know today. When she first adopted a plant-based diet and started blogging in 2016, she – like many others in this space – often posted the usual photos and recipe play-by-plays. ‘I created the blog as a way to motivate myself to stick with this choice that I’d made to eat plant-based, while also eating the foods that I love,’ she says.

I thought I’d utilize my platform to try and open people’s hearts to the immigrant story.

A year in, she hit 10,000 Instagram followers and shifted gears to share personal stories about her life and family. ‘I thought that everybody understood the US is made up of immigrants, but I learned that was perhaps very naive on my part,’ she says. ‘I thought I’d utilize my platform to try and open people’s hearts to the immigrant story.’

Part of Molinaro’s explosive success as a skilled storyteller stems from her work as a trial lawyer for 17 years. ‘I have to tell stories to the jury,’ she says. ‘I have to make them understand why my story is better than the other side’s story and more compelling. So telling a story, particularly within strict parameters, i.e. 60 seconds, is not something new to me.’

Her evolution has taken her from partner at a prominent Chicago law firm (where she only recently quit to pursue content creation full-time) to food blogger to champion of the marginalized. ‘Today I view myself far more in the role of an advocate, speaking for people who maybe are uncomfortable speaking for themselves,’ she says. ‘That is exactly what a lawyer is.’

Her popularity has also been fueled by an explosive interest in all things Korean over the past few years, as the Western world’s obsession with K-pop and K-dramas spills over into the country’s food. In Parasite – the first foreign-language film to score a Best Picture Oscar – an instant-noodle dish called jjapaguri plays a starring role. Non-Koreans are gravitating toward gochujang, a spicy-sweet chile paste that’s a key flavor profile in Korean cuisine. Molinaro is keenly aware of the cultural zeitgeist – so much so that she credits it for helping to propel the Korean Vegan’s success.

‘BTS is the most popular band in the world right now, and the new Korean drama Squid Game is the most popular show on Netflix,’ she says. ‘Clearly the lens has now shifted to Korean culture. When I wrote my book proposal, I was like, “People are really interested in Korean food, so you should publish my book!”’

I want to make sure that the people who haven’t yet been seen are seen and heard, and the people who need to see and hear are also seeing and hearing.

But for Molinaro, the cookbook is just the start. As an advocate for underrepresented communities, Molinaro believes her veganism is an extension of a broader message – a call for all of us to be kinder and more compassionate to ourselves, to animals and to the planet. ‘To me, it’s partially about what we eat, but it’s also how we treat each other, how we talk to one another and how we interact with our family,’ she says. ‘All of those things are tied to those messages of compassion.’

While Molinaro crafts delicious, veganized versions of budae jjigae and tteokbokki, she’s also leveraging food as a vehicle to connect and engage with strangers all over the globe. ‘One of my favorite messages was from a woman who was like, “I’m a white woman in Alabama in law enforcement. I literally am as different from you as possible. But so many of the things that you say resonate with me,”’ she says. ‘Equally as powerful are messages from other Asian-Americans, particularly women, who say, “I've never been able to say this about my relationship with my dad. I’ve never been able to articulate what it felt like to feel unseen.”’

Armed with her recipes, resilience and empathy, Molinaro is ready to change the world. ‘I want to make sure that the people who haven’t yet been seen are seen and heard, and the people who need to see and hear are also seeing and hearing,’ she says.

If she happens to convince you to try her excellent vegan kimchi in the process, well, she’ll have already done her job.