All the Van Gogh paintings you should know about

With his work featured in major NYC art museums such as The Metropolitan Museum of Art, MoMA and the Guggenheim, Vincent Van Gogh (1853–1890) is one of a handful of artists whose name is instantly recognizable by nearly everyone. The outline of his story is general well-known: Born into an upper-middle-class family in Holland, Van Gogh exhibited artistic tendencies from a tender age, but only took up painting in 1881 at age 28. Though he attended art schools in Antwerp and Paris, he was largely self-taught, yet he still managed to become one of the most important figures in Western art. And of course, he suffered from depression and psychotic episodes throughout his life, which led to the mutilation of his own ear, a stay at a mental asylum and eventually, suicide. In effect, Van Gogh wrote the book on artistic genius wracked by torment, cementing a mythology that surrounds him to this day. Yet ultimately what matters is his iconic body of work, which continues to astonish as you can see in our guide to all the Van Gogh paintings you should know about. 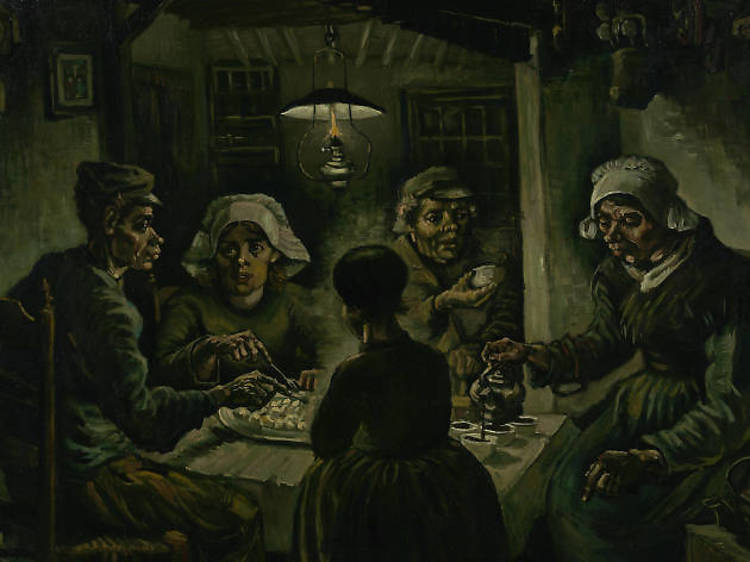 Produced four years after Van Gogh began to paint in earnest, The Potato Eaters is generally considered his first major work, though it’s a far cry from the furious brushwork and intense palettes of his most familiar paintings. Instead, this scene of poor farmers having dinner is dark, brooding and somewhat creepy, given the distorted features of the subjects. This may account for why Van Gogh’s brother, Theo—who was also his dealer—had difficulty selling the piece. 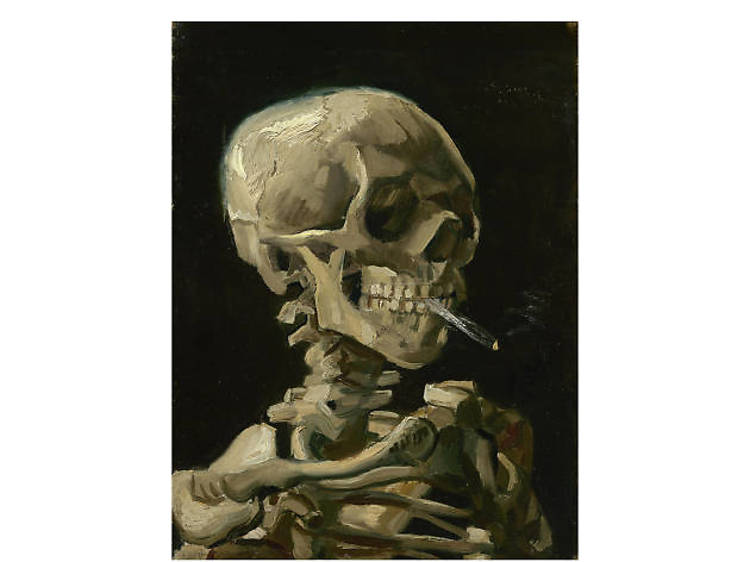 Vincent van Gogh, Head of a Skeleton with a Burning Cigarette, 1886

Van Gogh moved from his native Holland to Antwerp, Belgium in 1885 to attend classes at the Royal Academy of Fine Arts (which he would later dismiss as boring and useless). It was around this time that he painted this darkly humorous image as a jab at the drawing curriculum of the school, which included making sketches of skeletons to gain mastery of the human form. 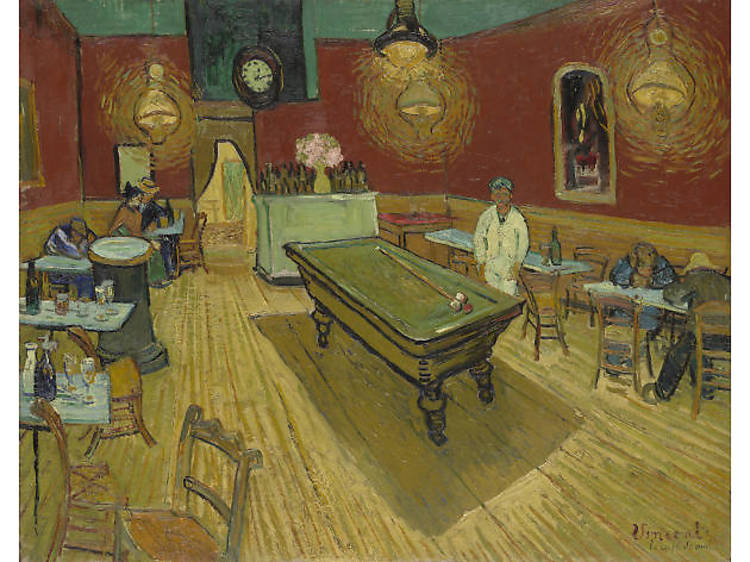 In 1886, Van Gogh moved to Paris, where he would meet artists such as Henri de Toulouse-Lautrec, Paul Signac and Paul Gauguin, and where he would eventually produce some 200 paintings. But even by then, Van Gogh was a mess: He drank heavily, ate poorly, and had been hospitalized back in Antwerp, supposedly for treatment of syphilis among other ailments. He quarreled with brother Theo, with whom he lived, and after two years of being in Paris, decided that he had enough of the city. Debilitated by too much drinking and smoking, Van Gogh decamped for Arles in the South of France in 1888 with the aim of starting an artist colony. He rented a home he called the “Yellow House,” which he also christened the “Studio of the South” with the hope of attracting other artists to Arles—especially Gauguin, whom Van Gogh repeatedly entreated to join him. Arles was also where Van Gogh forged his signature style out of a range of sources that included Japanese Prints, Impressionism and Pointillism. The Night Café is a case in point: A scene of a bar interior, it’s painted in clashing colors to convey the seediness of the place, which was known as a favorite hangout for vagrants and prostitutes. 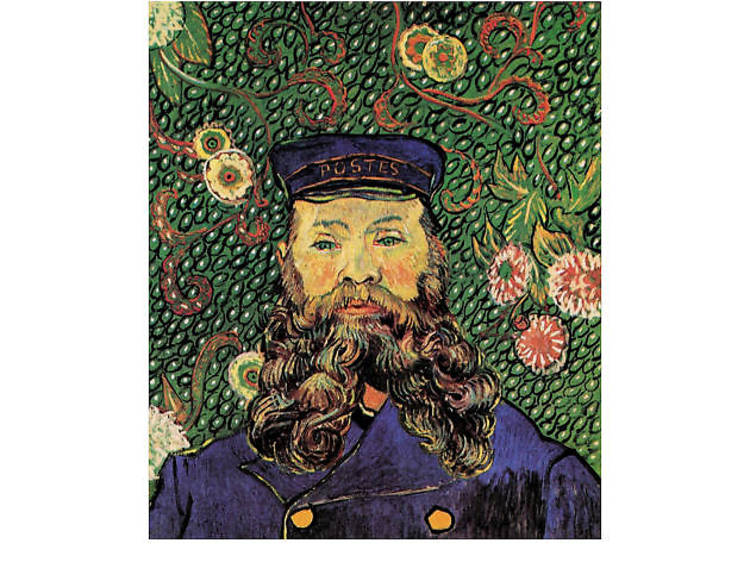 A postal official in Arles, Roulin was also Van Gogh’s neighbor and a frequent subject for what Van Gogh boasted was a new kind of portraiture, in which the sitter’s essence was captured through color instead of likeness. 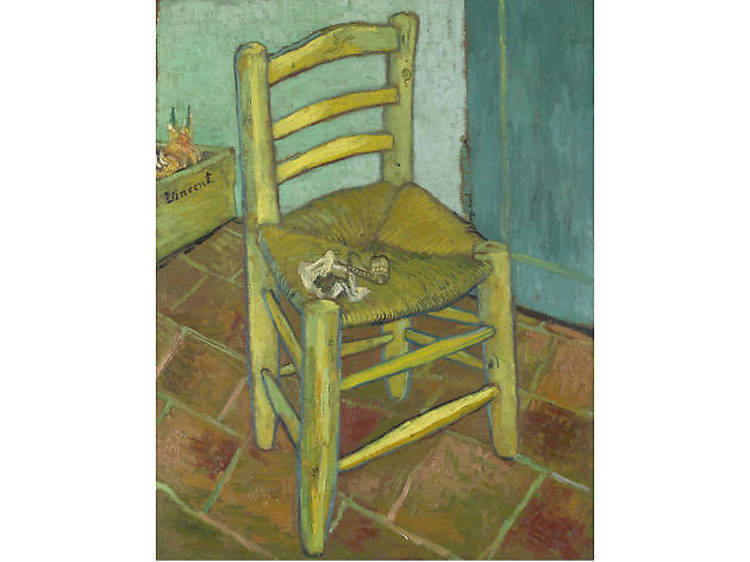 Gauguin finally joined Van Gogh in Arles for a three-month stay between October and December of 1888. It wasn’t exactly smooth sailing, however. When they weren’t busy arguing about art, the two artists worked side-by-side, though their egos clashed constantly. This forlorn image is actually half of what’s essentially a double portrait of Van Gogh and Gauguin, in which the chairs they respectively used in the studio become substitutes for the artists themselves. The eventual falling out between the two artists led to Van Gogh cutting off his ear (though some accounts maintain that he only disfigured it).

Where to see it: The National Gallery, London 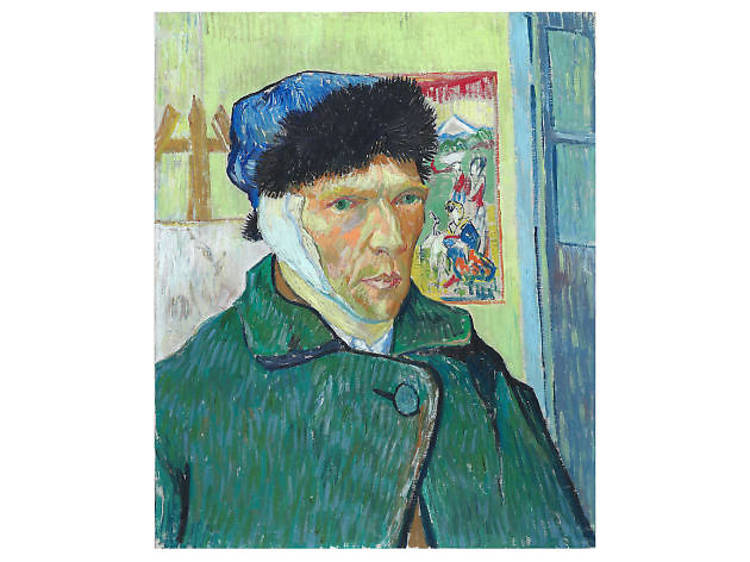 This painting is one of two commemorating Van Gogh’s self-mutilation, though this was the first one he did after returning from the hospital. He’s seen bundled up as if his studio lacked heat—which, given Van Gogh’s chronic poverty, was a distinct possibility. In the background you can see a ukiyo-e woodblock print hung on the wall, which speaks to Van Gogh’s fascination with Japanese art.

Where to see it: The Courtauld Institute of Art, London 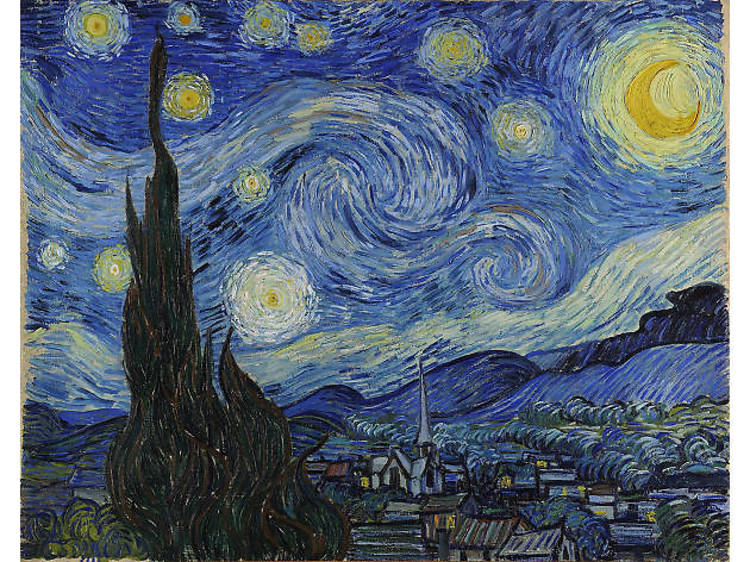 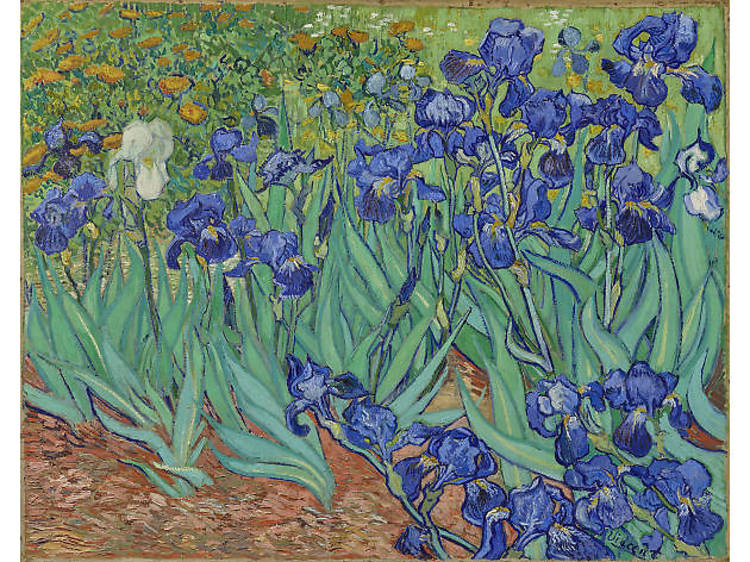 Another canvas that came out of Van Gogh’s stay in Saint-Rémy, Irises is one of many floral studies he made in the asylum’s garden.

Where to see it:  The J. Paul Getty Museum, Los Angeles 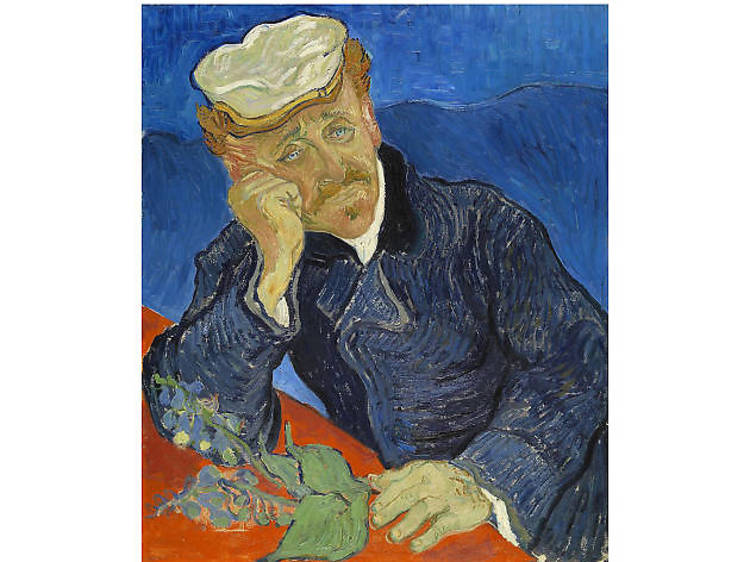 By 1890, Van Gogh was beginning to garner praise for his work from critics and fellow artists alike. He was included in exhibitions such as the Artistes Indépendants in Paris, where Claude Monet pronounced his work the best in show. Yet at the same time, he suffered a relapse of his mental afflictions after a period in which they seemed to ease. Following the recommendation of artist Camille Pissarro, Theo decided that Van Gogh should seek treatment from Dr. Paul Gachet, a physician and painter who travelled in avant-garde circles. In May of 1890, Van Gogh moved to Auvers-sur-Oise, where Grachet maintained his practice. Van Gogh, who wrote to Theo that Grachet seemed “iller than I am,” painted this portrait of the good doctor (one of several) as a fellow depressive.

Where to see it: Musée d’Orsay, Paris 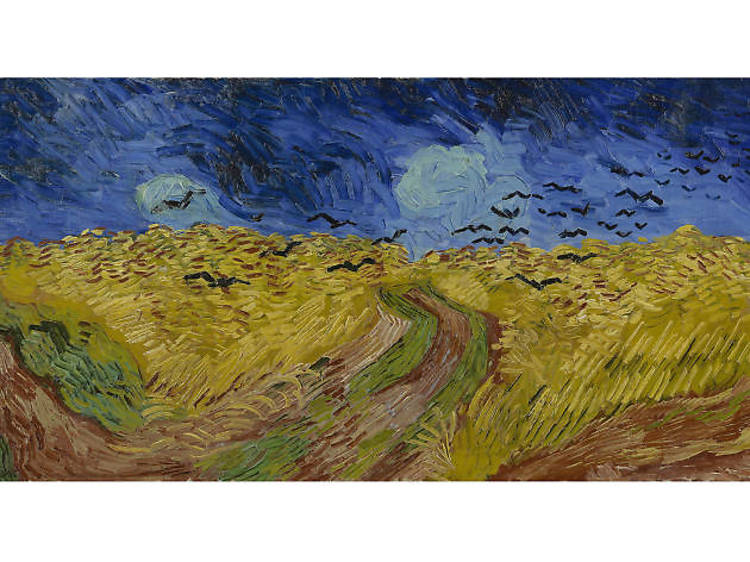 This scene of crows taking flight from a wheat field was painted in Auvers-sur-Oise in July of 1890, shortly before Van Gogh committed suicide by shooting himself in the chest. He lingered for 30 hours before death claimed him at age 37. In retrospective it’s tempting to see the painting as a kind of suicide note, with its flock of black, wing-shaped brush marks ascending into a sky that is practically writhing with frenetic dashes of blue. Van Gogh wrote to Theo that the wheat fields he encountered that summer seemed to reflect “sadness and extreme loneliness,” but also the “invigorating” effect of being in the country. Wheatfield with Crows embodies both feelings, as well as a promise of release from a tortured life.

Where to see it:  Van Gogh Museum, Amsterdam 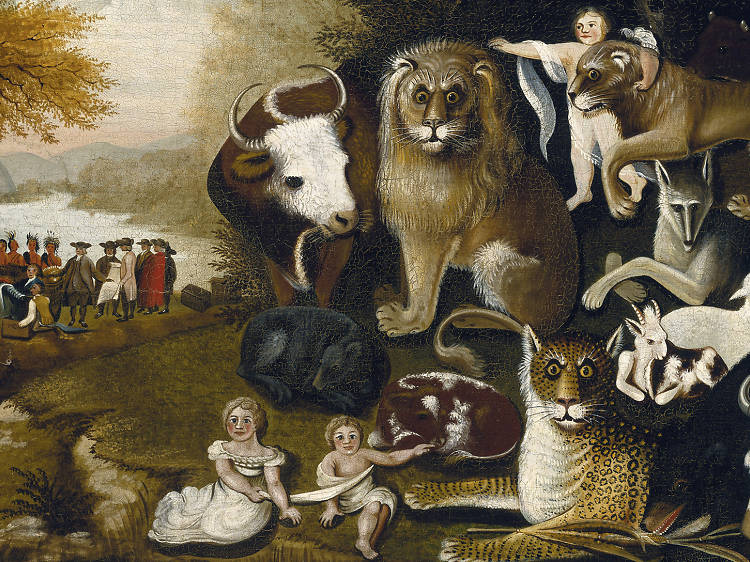 Leading critics pick the best paintings to be seen in NYC