After the First World War, architecture in Paris (like in other great cities across the world) turned away from the asymmetrical, sinuous forms of art nouveau, (made famous in Paris by architects like Hector Guimard, who designed the iconic Métro entrances) to embrace the angular, modernist and often symmetrical forms of cubism and neoclassicism. This aesthetic transformation reflected the nation's desire (during the Roaring Twenties and 1930s) to embrace modernity and leave behind the hardship of the Great War. In Paris, it left the city with some true architectural gems, from art deco palaces at the Trocadéro to modernist constructions by Le Corbusier and stunning municipal swimming pools. Even a handful of parks and gardens were landscaped according to art deco aesthetics. 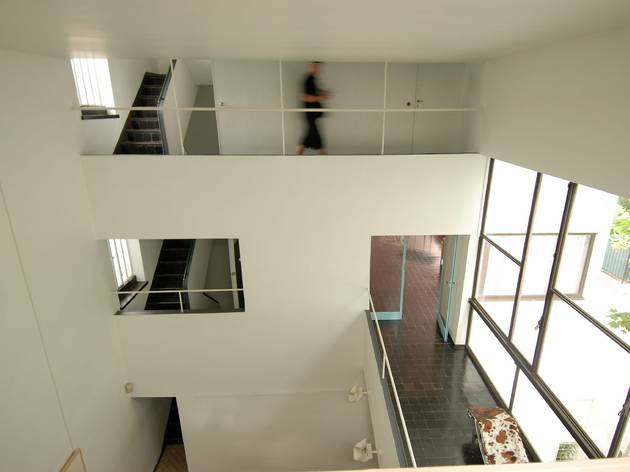 Designed by Le Corbusier in 1923 for a Swiss art collector, this house shows the architect's ideas in practice, with its stilts, strip windows, roof terraces and balconies, built-in furniture and an unsuspected use of colour inside: sludge green, blue and pinky beige. A sculptural cylindrical staircase and split volumes create a variety of geometrical vistas; inside, Le Corbusier's own neo-Cubist paintings and furniture sit alongside pieces by Perriand. Adjoining Villa Jeanneret houses the foundation's library. 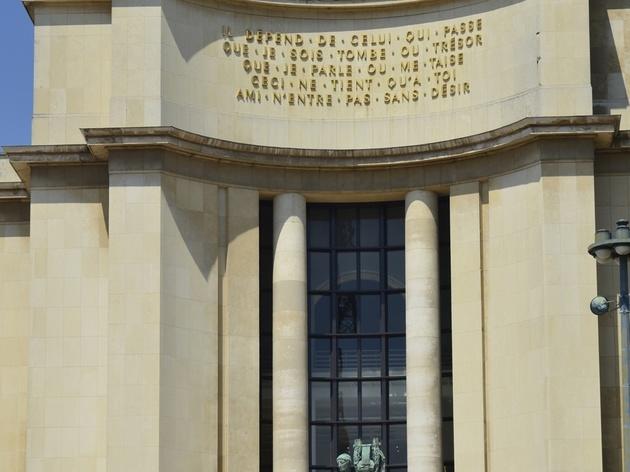 Dominating the Chaillot hillside, with breathtaking views over the Eiffel Tower, this immense pseudo-classical building was constructed by Léon Azéma, Louis-Hippolyte Boileau and Jacques Carlu for the Exposition Universelle of 1937. Its gracious, curved wings, decorated with giant sculptures by Henri Bouchard and Paul Belmondo (see Musée Paul Belomndo) and inscriptions by Paul Valéry house institutions like the Musée National de la Marine and the Musée de l'Homme (closed for renovation until 2014). In the east wing are the Théâtre National de Chaillot, with its outstanding Art Deco lobby from which you can watch the Eiffel Tower sparkle at sundown, and the Cité de l'Architecture et du Patrimoine, which covers French architecture from medieval times to today. 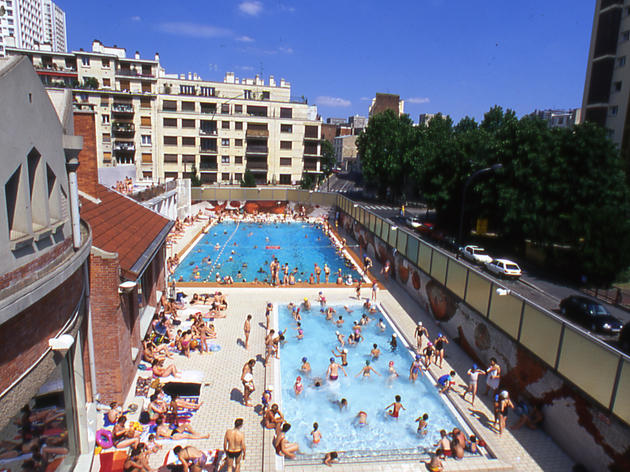 Perhaps the most atmospheric swimming pool in Paris, this listed complex, built between 1922 and 1924 in red brick (by Louis Bonnier), has one main indoor pool and two outdoor pools (swamped by sunbathing Parisians in the summer). Its façade still clings to the curvaceous forms of art nouveau, but inside it is resolutely art deco, decked in colourful cubist-style tiles and vast exposed concrete arches – the first of their kind to be used in a swimming pool. Unknown to many, this part of Paris lies over a natural, sulphurous spring, so the water at the Piscine de la Butte aux Cailles is a temptingly tepid 28°C all year round. The water is pumped up via an artesian well, built in the late 19th century. 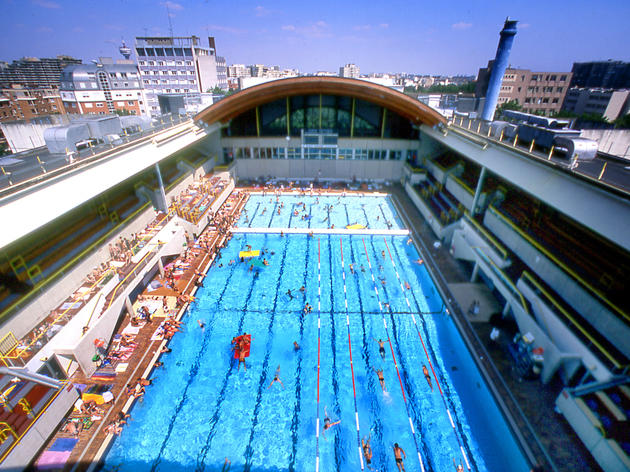 Built for the 1924 Olympics in the art deco style, the HQ of France’s national swimming federation features a retractable Plexiglas roof, a 50m pool (often split into two 25m pools), a kids area and seating for 1500 spectators. It was here that American swimmer Johnny Weissmuller set the 400m freestyle record (in the 1924 Summer Olympics) – he went on to play Tarzan in 1930s and 40s Hollywood movies. The pool was renovated in the 1980s, but its original forms and proportions remain, making it one of Paris’s best examples of Années Folles architecture. If you plan to swim here, always check the opening times on the website; international water polo matches are still frequently held here so the pool is sometimes closed. 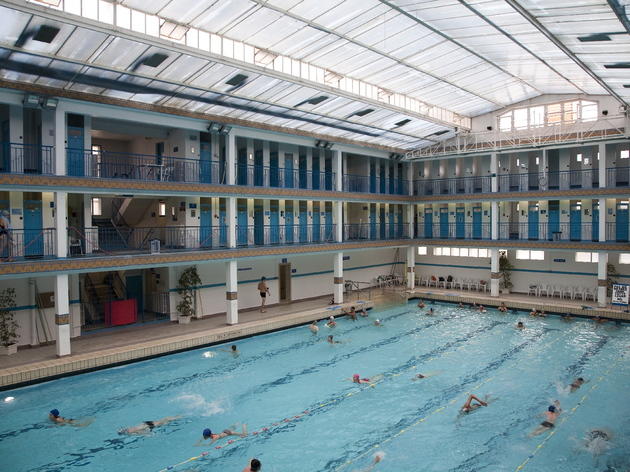 Kieslowski shot a scene from his film 'Three Colours: Blue' in this beautiful art deco pool (built in 1931), recognisable by its two mezzanine levels and private locker rooms. It was also here that Jacques Cousteau began his diving training in 1936. A riot of angular pillars, square forms and glass (in the roof) make the Piscine de Pontoise one of Paris’s prettiest pools. It’s also one of the quirkiest, offering night swimming to underwater music and coloured light that casts eerie hues over the walls and the water. For diehards, there’s an onsite sauna and squash courts. Small fee for lockers. 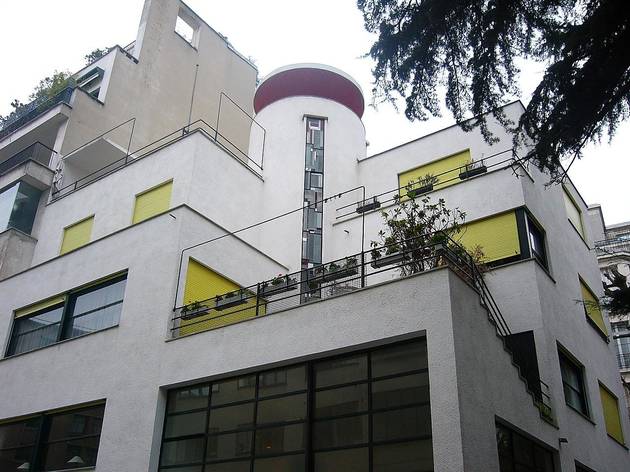 Of all the 1920s French architects, Robert Mallet-Stevens best combined the stylishness of art deco with the principles of modernism. In the 16th arrondissement on Rue Mallet-Stevens (named after the architect in 1927), you will find several of his exclusive cubist houses, each just as modern as the next (even by today’s standards), with complex displays of windows, large volumes and formal compositions. While you’re there, don’t miss Rue du Dr Blanche (at the end of rue Mallet-Stevens), which (at no.5) harbors artists' studios by Pierre Patout, another art deco architect famous for decorating the luxury cruise liner Normandie (art deco was also known as  le style paquebot (liner)). 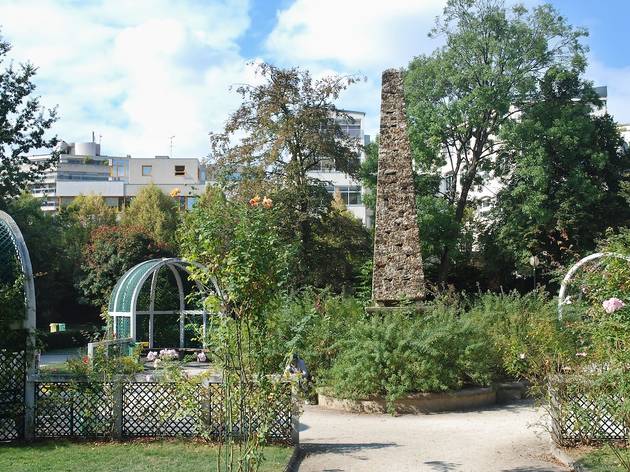 The leafy Square René le Gall (also known as the Jardin des Gobelins), built over the underground River Bièvre, was designed by architect Jean-Charles Moreux (1889-1956) in 1937-38. It stands today as one of Paris’s finest examples of a neoclassical art deco garden, with square parterres of lawn, an obelisk and a geometric rose garden with four mini concrete pavilions (a modernist take on the Château de Villandry’s famous Loire Valley gardens). The most distinctive part of the square, however, is the ramp up to the park’s entrance on rue Croulebarbe: decorated by the sculptor Garnier, the wall caricatures a baroque grotto, with stone faces that peer out of the walls like a fruit-filled Arcimboldo painting. 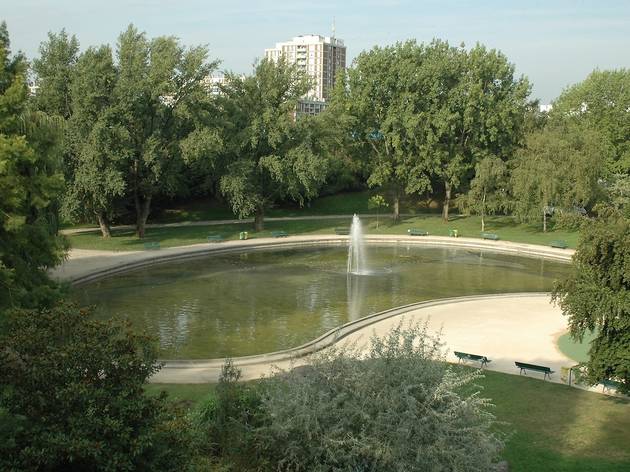 Like the Square René Le Gall, the Parc Kellermann was built over the River Bièvre (by Jacques Gréber, chief architect for the Exposition Universelle) in 1937. But while certain sections reflect the geometric forms typical of art deco pleasure gardens, this park wasn’t built for relaxation and strolling. It was created to promote sport, which since a decree made in 1920 by the ‘Ministère de l’Hygiène et de la Prévoyance’ had become obligatory for school children. Two neoclassical 1930s bas-reliefs represent this ideal at the park’s redbrick entrance – one showing a game of boules for boys, and the other dance for girls. In the summer, pack a picnic and pick a spot by the fish-filled lake. 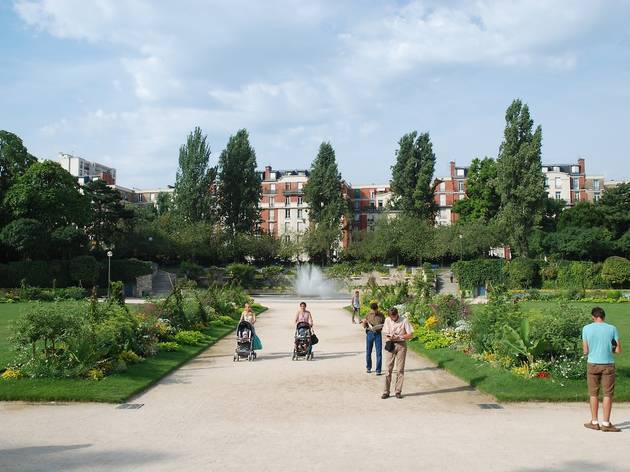 Set on a former gasworks site, the vast Saint Lambert gardens were created to 1933 to help clean up the area. Once the factory and its foundations had been demolished, architect Georges Sébille replaced the contaminated earth with clean soil and used the hole to make a miniature lake surrounded by an amphitheatre of parkland. The park is split into three areas: the children’s play area with swings and slides, a sandpit with a circular shelter for wet weather and an open-air theatre. Like many art deco-era parks, the main wall is embellished with a monumental bas-relief – in this case of dancing children, by sculptor Auguste Guénot (1882-1966). Another wonderful art deco oeuvre to look out for is Victor Peter’s 1938 statue (Les Oursons), which shows two young bears fighting. 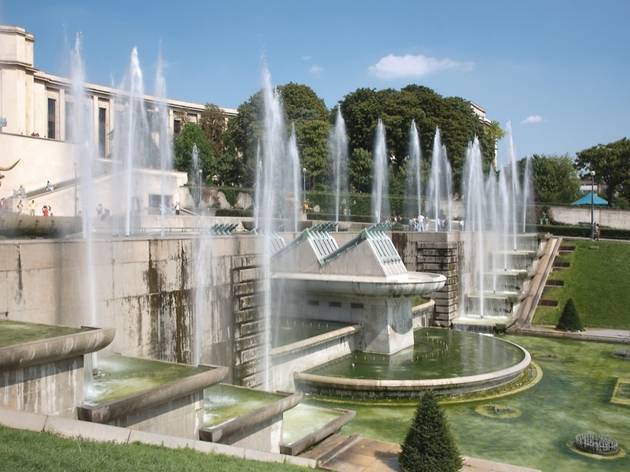 Grand grounds to match a grand edifice, the Palais Chaillot’s gardens are nothing short of breathtaking, with Varsovie’s colossal fountain centrepiece (designed to spurt 8240m3 of water an hour) and slopes lined with art deco statues like Traverse’s l'Homme and Bacqué’s la Femme (man and woman). Created at the same time as the palace (in 1937 for the Exposition Universelle), the lot leads to a panoramic esplanade between the edifice’s two wings. Flanking the main garden are two English-style lawns with an artificial waterway that meanders between chestnut and oak trees. Nestled in amongst this splendid backdrop is the Cineaqua, Paris’s high-tech underground aquarium – a great place to bring the family. 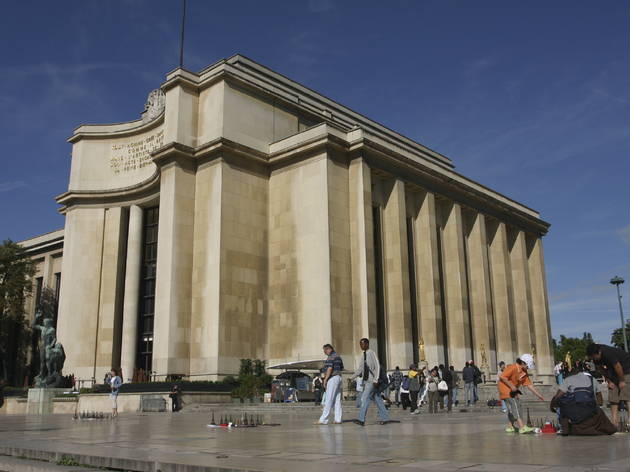 A walk past some of Paris's best modernist architecture View Time Out Paris Walks: The path to modernity in a larger map In stark contrast with its current rather snooty image, in the early 1900s the 16th arrondissement was a hotbed of avant-garde architecture and experimentation. This walk explores the artists' studios, apartment blocks and luxury villas that sprung up  in a district that had only recently been incorporated into Paris proper. Start on Rue La Fontaine at the Castel Béranger, the Art Nouveau masterpiece of Hector Guimard – before dropping in for an early coffee break at the whimsically pretty Café Antoine at no.17, inserted into another Guimard building with clever wrap-around corners. Next admire the rampart tendrils sprouting from the wrought-iron fence of the Hôtel Mezzara at no.60, also designed by Guimard, for textile manufacturer Paul Mezzara. Further along at no.65, don't miss the polychrome-tiled 1926-28 artists' Studio Building by Modernist maverick Henri Sauvage.Turning right into avenue Mozart, you'll find Guimard's former home at no.122, where he lived with his American artist wife Adeline Oppenheim. On the corner as you turn left into Rue Jasmin stands the imposing Beaux-Arts style apartment building – just the sort of neo-Renaissance frippery against which Guimard was rebelling. Turn right into rue Henrich Heine, then left along Rue du Dr Blanche. Here you'll find the Fondation Le Corbusier, housed in two villas designed by the architect in 1923