Autumn is perhaps the best time to start planning weekend getaways in PA. If you spend enough time in, say, South Philly, you can forget trees exist. That's a shame, because Pennsylvania has some serious leaf game once fall rolls around. In fact, according to the Department of Conservation and Natural Resources, our state’s unique latitude, topography and elevation provide for the most colorful autumn in the world, with 134 species of trees and shrubs to ogle. Want to see them in all their glory? We put together five weekend getaways in PA complete with luxe lodging, travelworthy eats and a cocktail or three. No time for travel? That's okay, too, because you can still do some excellent leaf-peeping in some of the more tree-heavy Philadelphia parks, like Wissahickon Park and Fairmount Park. For the complete experience, score autumnal eats at some of the best restaurants in Philadelphia and pumpkin lattes galore at some of the top coffee shops Philadelphia has to offer.

RECOMMENDED: Our full guide to things to do in Philadelphia 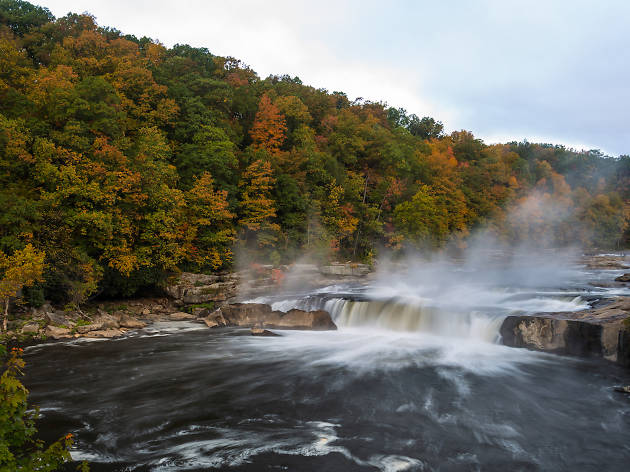 Admit it—short of, say, a bathroom break on the way to Pittsburgh, you haven’t spent much time in the wilds of Western Pennsylvania. This, friends, is a mistake. A picturesque region on the edge of the Appalachian Mountains, Laurel Highlands is a prime fall destination, thanks to hundreds of miles of trails throughout eight state parks and two state forests. Take it all in at Mount Davis in Forbes State Forest, the highest point in the state, at 3,213 feet.

Stay
Some people like exploring. Others prefer to check in, order a drink and let their vacation come to them. If you’re in the latter camp, Nemacolin Woodlands Resort has your name all over it. Situated on 2,000 wooded acres, this sprawling complex features a variety of accommodations plus a spa, golfing, five-star dining, a casino, horseback trail rides and a Wildlife Academy for kids complete with lions, tigers and bears. (Seriously—you’re not in Kansas anymore, Philly.)

Drink
Not all trails are created equally. The Southwest Passage Wine Trail winds through Laurel Highlands with eight stops, including Christian W. Klay Winery. Located on a mountaintop farm, the family-run vineyard boasts 15 scenic acres perched high above the surrounding countryside. We’ll drink to that.

Eat
Frank Lloyd Wright was a fan of Laurel Highlands; he built his iconic Fallingwater house on the Bear Run stream. Nearby, Polymath Park is home to the famed architect’s Duncan House—which is available to rent if you’re looking for a more private getaway—as well as Tree Tops. Tucked into the forest canopy, this Wright-inspired restaurant leans toward traditional steakhouse fare, but keeps vegans and gluten phobes in mind as well. Reserve a table on the deck, but be warned—it’ll put Philly’s sidewalk dining scene to shame. 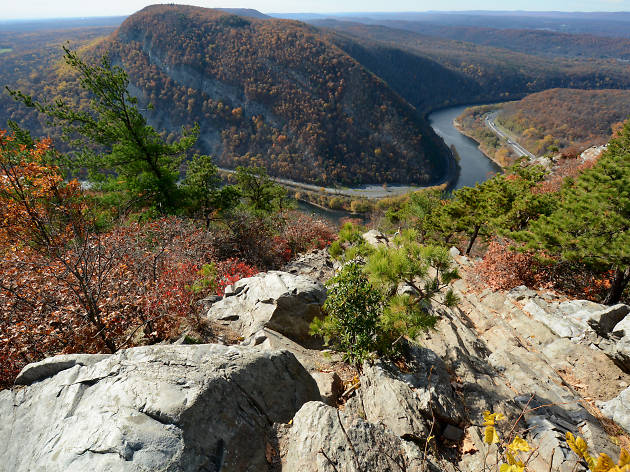 The Poconos takes its leaves seriously. Through the end of October, the Visitors Bureau operates a 24-hour Fall Foliage Hotline (570-421-5565) offering up-to-date info on the sprawling region’s three distinct “color zones.” Hiking is the obvious choice, whether you trek the ambitious Appalachian Trail or opt for a more family-friendly day at Bushkill Falls, a.k.a. “the Niagara of Pennsylvania.” If you’d like to take in the views with a little more swagger, you have plenty of options: chartered plane rides, zip-lining courses, train tours, lake cruises and even skydiving excursions cater to tourists.

Stay
Nestled in the woodlands surrounding Lake Naomi, the historic Mountaintop Lodge has charm that gently winks to your days at summer camp. The bed-and-breakfast is part of the Lake Naomi community, meaning guests can enjoy amenities including a golf course, a fitness center, boat rentals and tennis courts.

Drink
Just a short drive from Lake Naomi, Barley Creek Brewing Company serves handcrafted ales and lagers, as well as a selection of guest brews, wines and cocktails. Enjoy free tours and tastings every afternoon, or get things started early at the Morning Toast, a daily boozy breakfast.

Eat
Nearby Lake Wallenpaupack offers plenty of scenic fall hikes, as well as a hidden gem for dinner. Ledges Hotel might not look like much from the parking lot, but walk through the doors and you’ll discover Glass, a restaurant and wine bar at the foot of a secluded waterfall. Grab a seat on the deck—and don’t skip the selection of local cheeses. 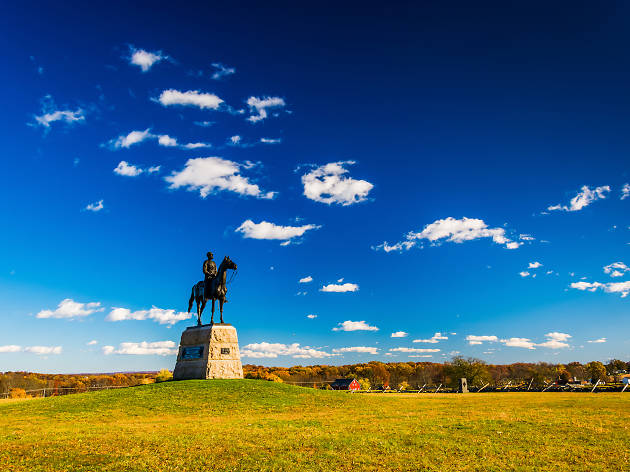 Catering to both history buffs and nature nerds, Gettysburg has a little something for everyone, especially come fall. The site of the Civil War’s bloodiest battle and Abe’s iconic address, Gettysburg National Park is also home to scenic trails lined with flashy oak, hickory and poplar trees. Hike, bike or book a horseback tour with Hickory Hollow Horse Farm. Their guides will take you off the beaten path to some of the park’s lesser-known nooks.

Stay
If you want to make the most of foliage season, consider Gettysburg Campground, a family-friendly destination with bare-bones tent sites as well as cottages equipped with private bathrooms and kitchens. Or, if “camping” is the dirtiest C-word you know, make a reservation at Gettysburg Hotel, which has added plenty of amenities—including a rooftop pool—since opening in 1797.

Drink
Consider Ubering to Mason Dixon Distillery. With a menu starring house-made vodka, rum and corn whiskey, this small-batch haven is the kind of place where the second round orders itself. A full selection of snacks, small plates and sandwiches makes sure that you won’t drink on an empty stomach.

Eat
In a previous life, Dobbin House Tavern served as a stop on the Underground Railroad. Today, Gettysburg’s oldest home is a Colonial-influenced restaurant with both candlelit dining and a more casual tavern menu. Is it a little kitschy? Yes. Is there a giant crock of cheesy, hug-in-a-bowl baked onion soup? Hell, yes. 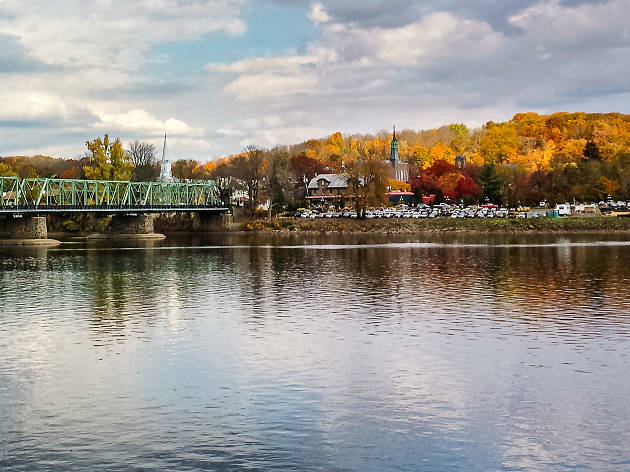 Hold on to your cardigans, friends—out in Bucks County, New Hope is aggressively autumnal. The only thing missing from this quaint borough is Lorelei Gilmore sipping a pumpkin spice latte—and come to think of it, we may have spotted her on Main Street. Here you’ll find plenty of ways to take in the region’s rainbow of oak, maple and poplar trees: Hop aboard the New Hope and Ivyland Railroad for a countryside tour, sip your way along the Bucks County Wine Trail or pay a visit to nearby Washington Crossing Historic Park.

Stay
There’s no shortage of cozy B&Bs in New Hope, but if you want to go full-on fall, book a room at the haunted Logan Inn. As one of the country’s oldest continually operating hotels, it’s reportedly occupied by a handful of restless spirits: Request room six if you’d like to meet Emily, a Civil War–era guest who forgot to check out.

Drink
With three bars, a pool club, an after-hours lounge and a Golden Girls drag revue, the Raven Resort shakes things up after an afternoon of antiquing.

Eat
Start the weekend off right at Blue Moose with a hearty brunch menu of omelettes, build-your-own burgers and their oft-Instagrammed cornflake-crusted French toast. And psst: This cozy neighborhood fave is BYOB, so don’t forget the bubbly. 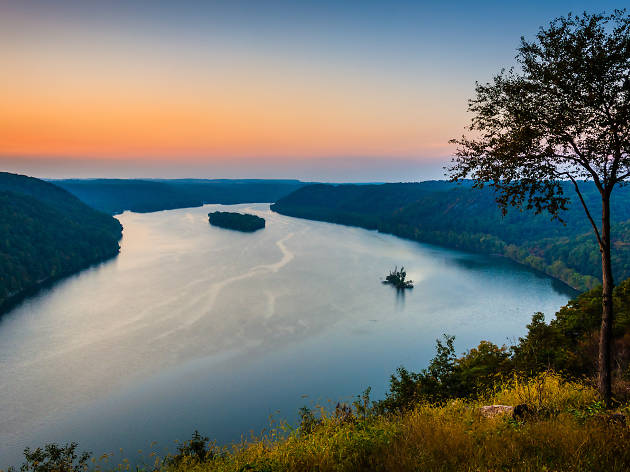 If you haven’t paid a visit to Amish Country since that middle school field trip, it’s time to give Lancaster another chance. Not only does the area boast top-notch leaf-peeping opportunities—including the Welsh Mountain Nature Preserve and Pinnacle Overlook, which offers a bird’s-eye view of the Susquehanna River—but the downtown area makes for quite the cushy base camp. Can you still churn butter in a bonnet? Sure. But you can also wash down all that nature business with poké, microbews and excellent thrifting.

Stay
A renovated 1800s tobacco warehouse, the Lancaster Arts Hotel feels Fishtownesque with its industrial loft suites and halls lined with work by local artists. After checking in, stick around for happy hour or dinner at John J. Jeffries (717-431-3307, johnjjeffries.com), the hotel’s seasonally inspired restaurant, which focuses on produce from area farms.

Drink
If you’re going to be out leaf hunting, you’ll need provisions—and by provisions, we mean booze. Hunger n Thirst offers more than 200 bottles of craft beer at its well-stocked marketplace, not to mention picnic-basket goodies such as charcuterie and a cheese selection that would make Di Bruno Bros. blush. Or have a seat and stay awhile at the bar, where classic-with-a-twist cocktails include the IPA-spiked Hopped-Up Mule and the Jamaican-rum-fueled Mama Juana Mule.

Eat
Vegan in Lancaster? It happens. Although the area has a meat-and-potatoes reputation, Root has you covered with dishes including eggplant bolognese and Caribbean jackfruit tacos. 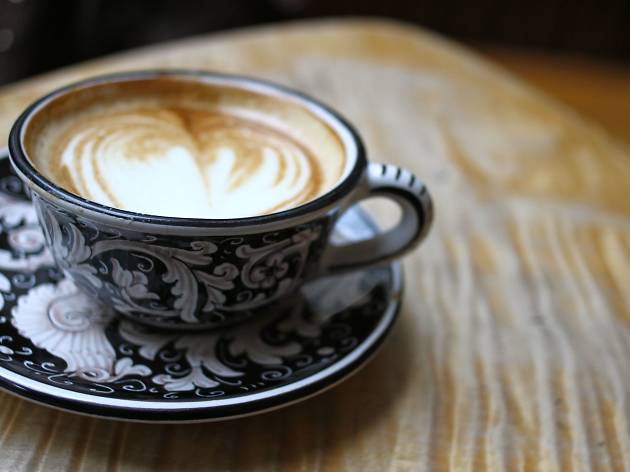 Looking for a cup of joe boosted with your favorite fall flavors? Find it at one of the best coffee shops Philadelphia has to offer.