The 12 best things to do in Portsmouth

From ancient pubs on cobbled streets to contemporary art galleries, here are all the best things to do in Portsmouth 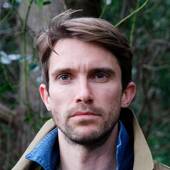 One of the oldest seaside cities in Britain, Portsmouth (or Pompey to the locals) blends its historic past with increasingly impressive food, drink and nightlife scenes. Found on Portsea Island – a thumb of Hampshire jutting into the Solent, it was one of the world’s leading naval ports at the height of the British Empire and still serves as Britain’s foremost Royal Navy base. No trip is complete without a roam around the Les Misérables-esque dockyard, complete with four historic ships, including Henry VIII’s flop of a flagship, the Mary Rose, and a string of superb museums.

While its maritime heritage is the main draw for visitors, Portsmouth has tons more to offer besides, from ancient pubs on cobbled streets to contemporary art galleries to football supporters so passionate they must be seen to be believed (particularly Pompey John, who has 60 tattoos and ‘P.F.C’ engraved into his teeth). Here’s our pick of the best things to do in Portsmouth right now.

Best things to do in Portsmouth 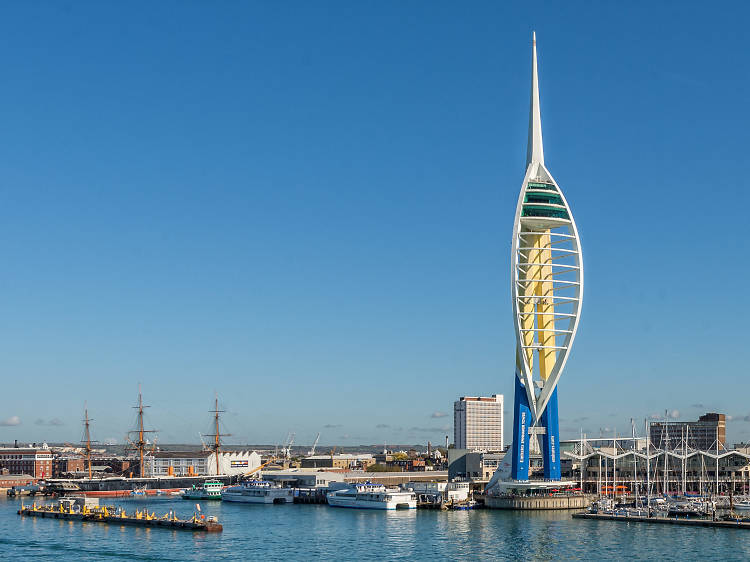 What is it? Modelled on a sail to reflect the city’s seafaring history, this landmark observation tower is two and a half times the size of Nelson’s Column in Trafalgar Square – standing at 170 metres. Originally called the Portsmouth Millennium Tower, it’s the centrepiece of Portsmouth’s regeneration: the trio of panoramic decks offer spectacular views out to sea and across southern England.

Why go? Head here for the regular comedy and music nights, offering you the chance to see the best comedians around and dance the night away in a venue like no other 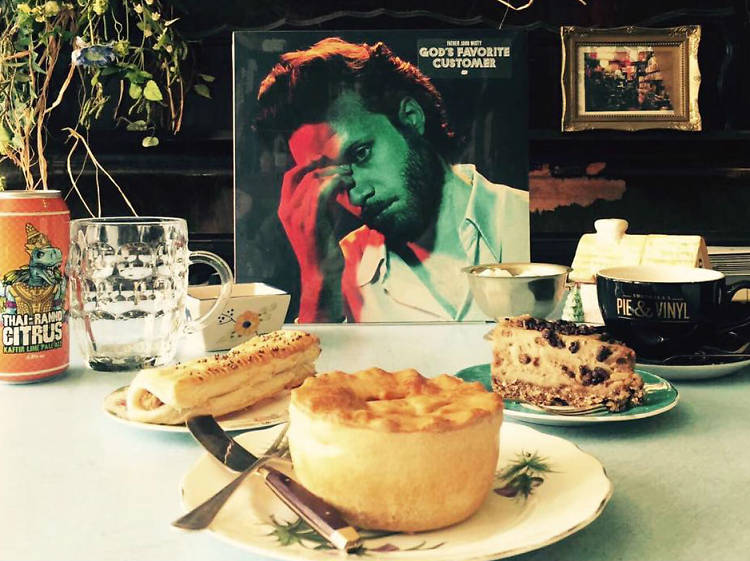 What is it? This shop-cum-restaurant does what it says on the tin – pies and a vast collection of vinyl to buy (or try). Imagine your coolest grandma’s sitting room (think wingback armchairs and upside-down lampshades) mashed up with your most with-it mate’s music collection. It’s a winning combo, whether you’re 15 or 55.

Why go? For an eye-popping selection of delicious pies with mash and liquor: look out for the more musically-inclined pies, like the Back to Black and Notorious P.I.G, with plenty of vegan and veggie options on the menu too. Don’t miss the retro cordials served in vintage teapots (we love the rhubarb and rosehip). 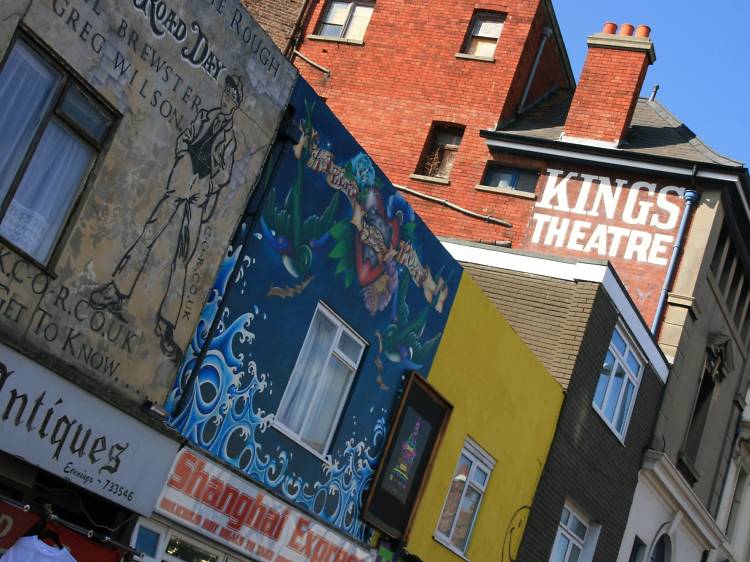 What is it? Day or night, there is never a dull moment on Southsea’s main artery. This stretch of quirky independents is worth exploring on foot – with plenty of browsing time and shopping bags in tow.

Why go? With a pub, cafe or restaurant every 20 metres and enough bric-a-brac shops to keep you rummaging for weeks, Albert Road is testament to why we should fight to keep the British high street diverse. Don’t miss the sushi at Sakura and cocktails at Gin and Olive (especially for the 4pm-6pm happy hour). Thespians: keep your eye on the programme at the Edwardian King’s Theatre – it attracts some surprisingly hefty household names. 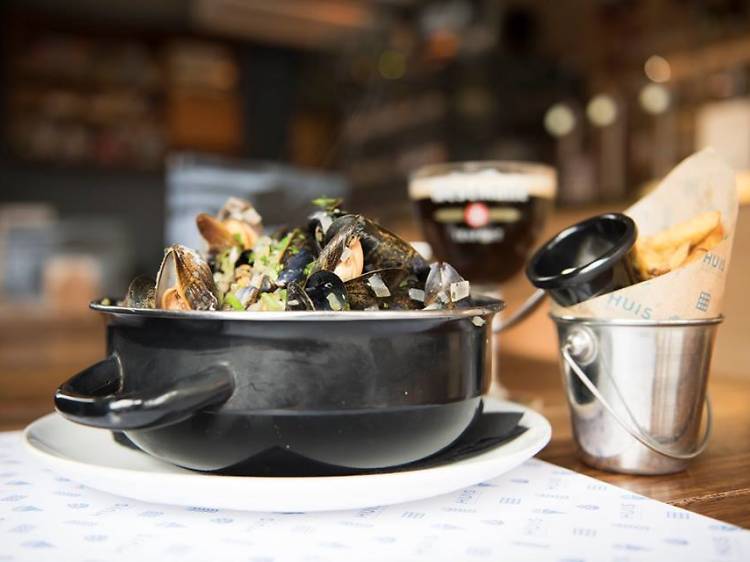 What is it? Meaning ‘home’ in Flemish, it’s hard not to feel like you’ve walked into one at this pocket-sized Belgian bar and kitchen. Hop-crazy drinkers will adore the intriguing 60-strong selection of bottled and draught beers, which rotates almost by the week.

Why go? The focus might be on beer here, but it’s a serious love letter to the compact country’s comfort food: start with the flammeküche (pastry pizza with lardons, shallots, cheese and crème fraïche), before picking one of six different buckets of moules (with twice cooked frites, no less). 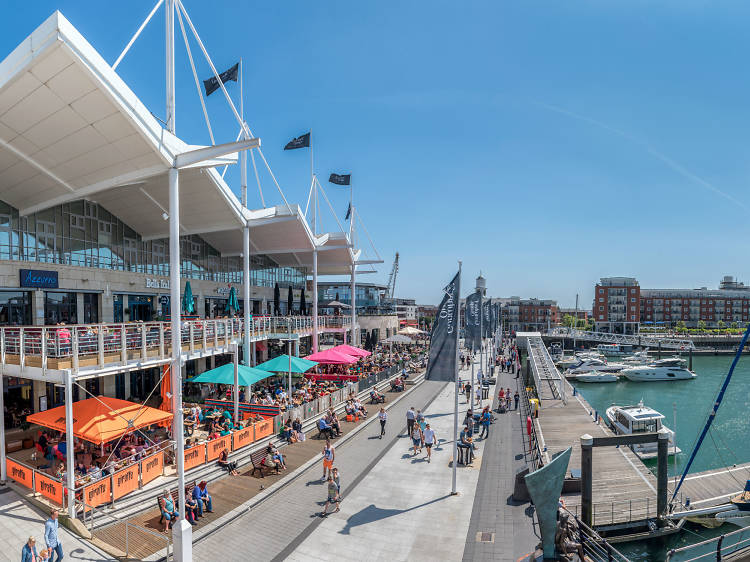 What is it? A chic, designer outlet on the waterfront that serves as a one-hit wonder for all your (discounted) shopping needs. It’s a hotspot for the locals too, so bank on it being lively from dawn until late.

Why go? To nab up to 60 percent off huge designer and high street brands like Calvin Klein, Adidas, Dr. Martens and Le Creuset. When you’ve shopped yourself to sheer exhaustion, refuel at one of the many restaurants. Aim for an outdoor table so you can ogle the yachts in the marina and crane your neck up at the Spinnaker Tower. 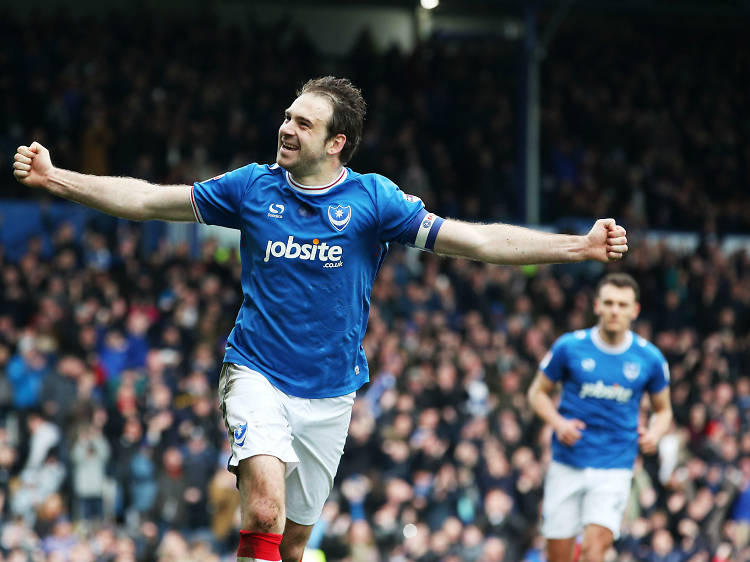 What is it? The home of Portsmouth F.C since 1898, Fratton Park – or ‘The Old Girl’ as it affectionately known by the team’s supporters – draws enormous crowds (21,000 to be more precise) and practically reroutes traffic on match days.

Why go? To scream ‘Play up Pompey!’ until your voice is hoarse, get lost in a sea of blue and sample the buzz of attending a League One match. Whether or not you’re a football fan, you’ll leave feeling all warm and fuzzy towards your host city’s beloved team. 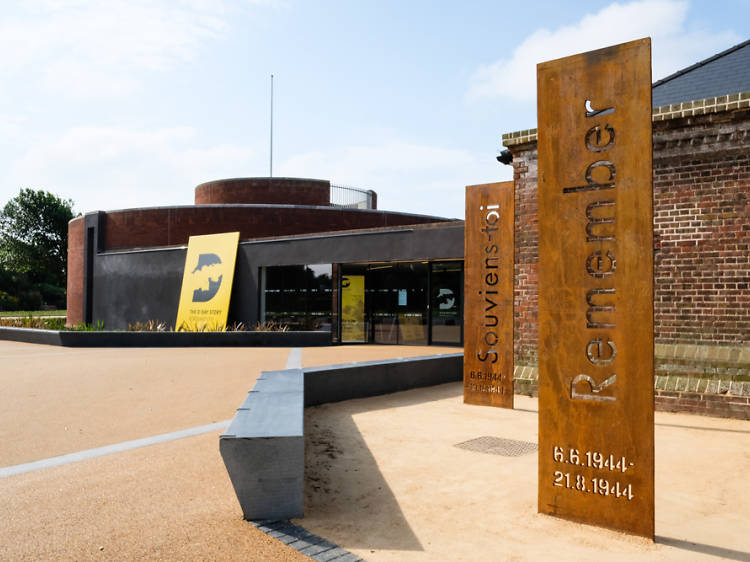 What is it? The only museum dedicated to the Allied invasion in 1944, the D-Day Museum tells the personal stories behind this monumental historic event, from both a civilian and military viewpoint. It is also home to the Overlord Embroidery: a whopping 83-metre stitched depiction that pays tribute to all men and women involved in the landings.

Why go? Look out for the pencil that started the invasion, which Lt Cdr John Harmer used to sign the order for Force G. On display for the first time ever, this encapsulates the museum’s ethos of showing all the cogs in the largest seaborne invasion in history. The landing craft tanks give a good idea of just how difficult it was to get military hardware onto French beaches. 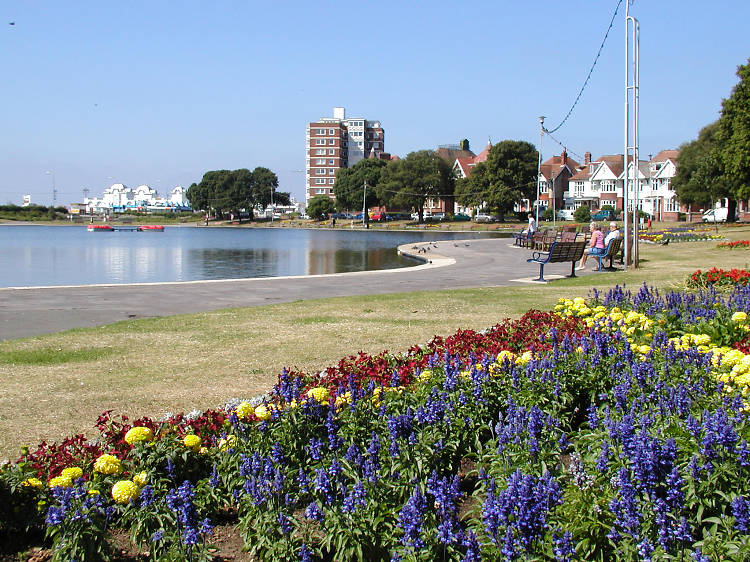 What is it? With its swan-shaped pedalos, Art Deco angel statue and lovingly tended flowerbeds, Canoe Lake could be a scene straight off a Victorian postcard. And seeing as it was built in 1886, it feels like stepping back in time. Grab a bucket and fishing line from the lake shop and spend the morning catching crabs in the lake. Watch out though – they are known to pinch.

Why go? It doesn’t get more retro nostalgic than this – essential additions include proper fish ‘n’ chips from the legendary Deep Blue on the nearby South Parade Pier, a 99 flake and a whizz around the penny arcade. Long live the British seaside. 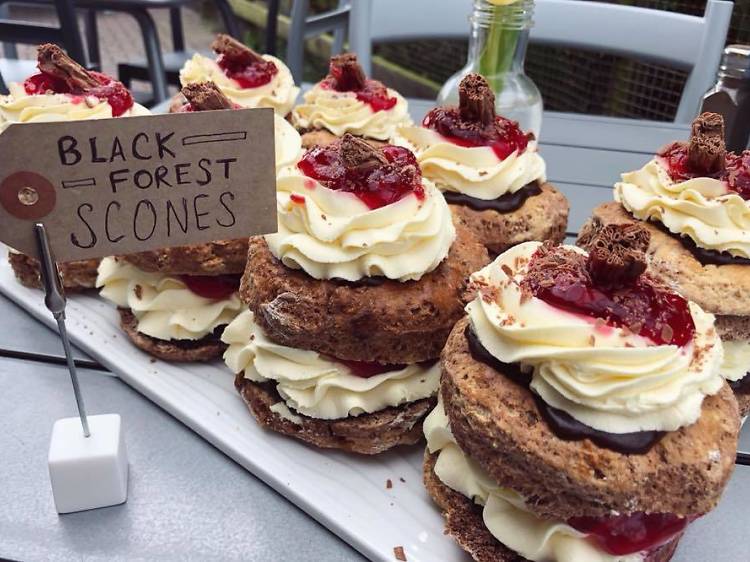 What is it? A buzzing tea rooms set on a pitch-and-putt course, expect to see a queue of locals outside Tenth Hole, especially on weekends. Go in between mealtimes for your best chance of a spot on the sunny terrace.

Why go? Cake, cake and more cake. Think doorstep slabs of freshly made victoria sponge, millionaire’s shortbread and banoffee pie, plus fist-sized scones with clotted cream and jam. But it’s not just a saccharine seventh heaven – the club sarnies and breakfasts are just as impressive. Book in a game of golf on the green before and you’ll have earned every bite – right? 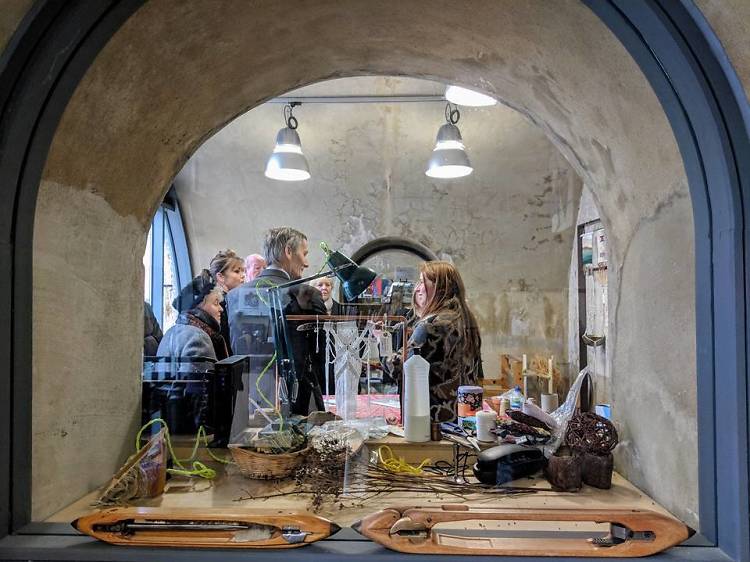 What is it? A former artillery barracks, Portsmouth’s artistic quarter opened to the public in 2016 and is now home to 13 different studios for the area’s creatives and designers. Minimalist and in-keeping with its beachside location, this is a blueprint of how to fuse the new with the old.

Why go? See up-and-coming artists in their element and browse their wares, before stopping off for a coffee at deli-style The Canteen. Trust you are in good hands, as it’s run by the same team as Tenth Hole Tea Rooms. 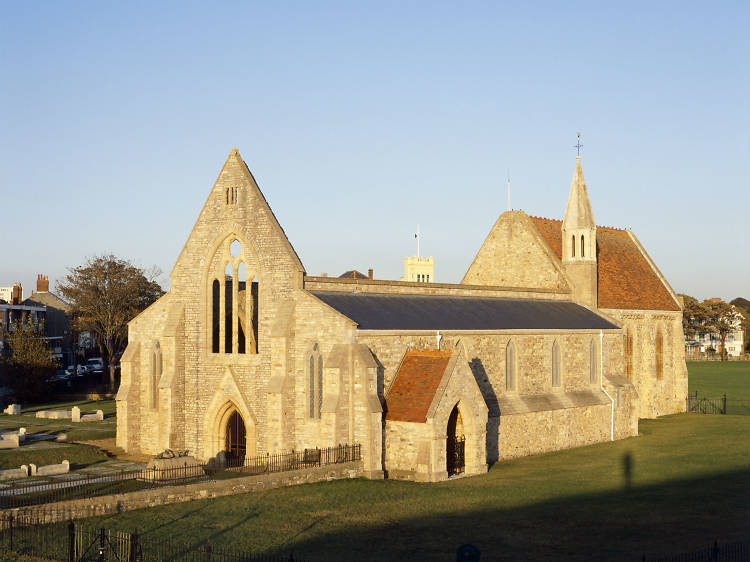 What is it? Founded in 1212 as Domus Dei (God’s House) this ancient garrison church was badly damaged in a 1941 firebomb raid and lost its roof, although the original (and incredibly detailed) chancel remains. Check out the twentieth-century stained glass windows depicting its more recent history, including the Second World War.

Why go? The site’s volunteers know the place back to front and will regale you with its 800-year long history, during which it has served as a medieval hospital, Tudor ammunition store and church for the armed forces. As atmosphere goes, this one’s is pretty ethereal. 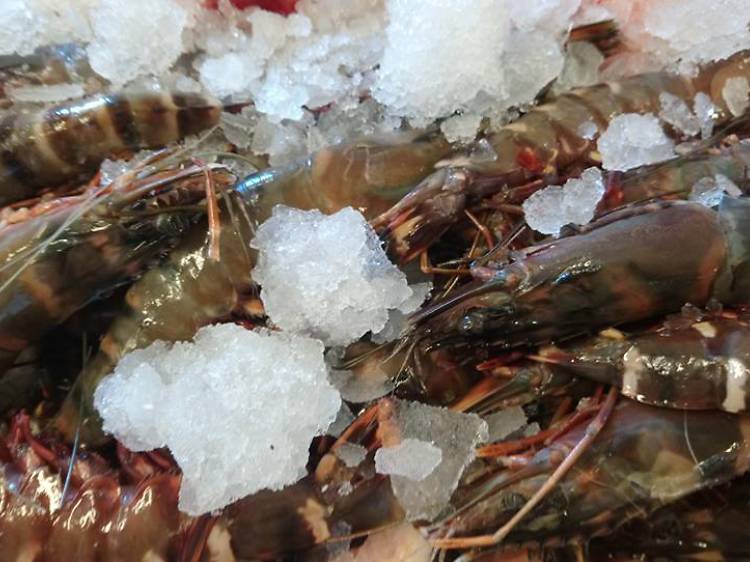 What is it? Right on the quaint Camber Dock, Viviers is the place to be for browsing this seaside city’s bountiful ocean produce. Go early for the best catch, then wander to Portsmouth’s oldest pub, The Dolphin, for a pint in the sun.

Why go? This small (but perfectly formed) market sells local fish and shellfish so fresh it’s almost still wriggling. Neck Hampshire oysters or pick up fish kebabs and slabs of salmon for the ideal beach barbecue.