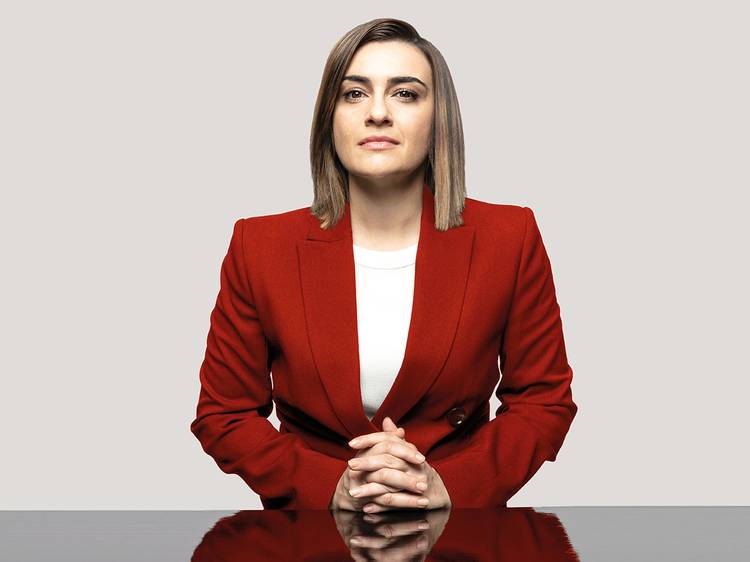 Griffin Theatre is back with a brilliant program for 2021

Declan Greene stepped into the new artistic director gig at Griffin Theatre Company in February last year full of beans, raring to get cracking on his 2021 program. One month later, the world as we knew it fell apart and theatres went dark. “So I think I had two minutes of feeling totally brattish, like ‘Life isn’t fair, why me,’ and then just got to the good work of rethinking everything, working out new parameters,” he says. After all, they're used to doing things a little differently. “The stables are a perfect embodiment of that,” Greene says. “They’re such a kooky shape, with a tiny foyer, and the artists and performers have created extraordinary feats of imagination inside that building in the first 50 years of the space. And so now, going into the 51st year, it kinda feels like, ‘Okay, we’re gonna be fine’. And I feel like we’ve responded to it in a way that I’m super-proud of. I’m just so happy with the season.” That includes remounts of hit show Prima Facie, and Greene kicking off the year with a site-specific outdoor show in Green Park, looking at gay hook-up culture and the secret queer history of Griffin’s neighbourhood Darlinghurst. “If the world falls in a fucking heap again, and we go back into four square metres social distancing, we can’t actually use the stables so it’s good to look at performances that can be moved elsewhere. And also there’s like an online show and an outdoor show.” He’ll also helm visceral drama Dogged, set on Gunaikurnai country. Associa 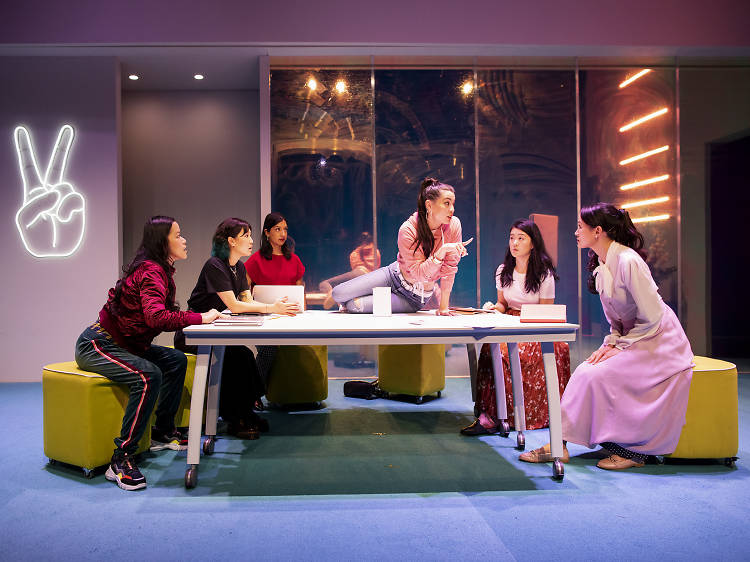 Anchuli Felicia King’s blistering satire about the fallout when a racist ad for skin-whitening cream plunges a cosmetics company into crisis mode spears bad corporate behaviour. Derailed from its initally planned STC run, this co-pro with the National Theatre of Parramatta debuted at Parra's Riverside Theatres in 2019. Read on for our review from that production: In contrast to the dreamy pinks and pastels of the beauty advertisements pumped out by fictional cosmetic start-up Clearday, Anchuli Felicia King’s White Pearl refuses to pander to neat appearances. In this blisteringly funny satire, a racist ad for Clearday’s skin-whitening cream ‘White Pearl’ goes viral. Over the next 85 minutes, its staff members’ resolves are tested to their limits in an attempt to save face – the heat rising in the boardroom as they reveal their truest, ugliest selves to each other. The scenario of a PR disaster naturally opens up the space for office tensions to stew away, but King’s play complicates matters with a sharp critique of “alternative” corporate culture, and intra-cultural racism. In the company’s Singapore headquarters, Priya (Vaishnavi Suryaprakash), the Indian-British CEO and founder of Clearday, and Sunny (Merlynn Tong), her Singaporean assistant, begin to craft a press statement to diffuse the crisis, chewing away on chips from their KFC buckets. Meanwhile, Soo Jin (Deborah An), the South Korean chemist, and Xiao (Shirong Wu) are in the bathroom; Xiao confesses her role in green 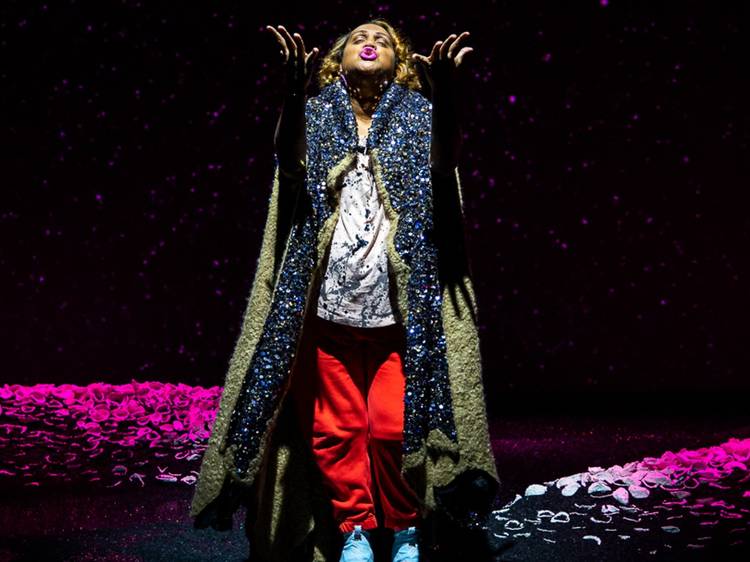 The 7 Stages Of Grieving

When you first sit down for Sydney Theatre Company’s latest production of The 7 Stages of Grieving, numbers appear on a screen behind mounds of dirt and broken shells on the stage. Connoting significant moments in First Nations history, 233, 30, 21, mark the years since colonial invasion, the Royal Commission into Aboriginal Deaths in Custody, and the first National Sorry Day, respectively. The sound of weeping plays as associations of ‘grief’ flash across the screen: sorrow, loss, death, pain, distress, lament. It ends with “Nothing…I feel nothing”. It’s a harrowing introduction, a visual recognition of the long-endured pain of generations of Indigenous families, of grief at centuries-long violence and dispossession. This is the fourth time that Sydney Theatre Company has staged Wesley Enoch and Deborah Mailman's landmark play since its 1995 premiere. Given its landmark status in the canon of Black and Australian theatre, it feels like a natural programming choice in 2021. Particularly as conversations around Black Lives Matter, Indigenous deaths in custody, and reclaiming Indigenous and Black identity grow louder, remaining as urgent and relevant. The revival presents a black box staging designed by Elizabeth Gadsby in consultation with Quandamooka artist Megan Cope of Re Formation sculptures. Shari Sebbens makes her STC directorial debut after delivering Seven Methods of Killing Kylie Jenner at the Darlo. In her steady hands, it’s a work that pulses with quiet trauma, wav

Compromising on artistic ideals often feels inevitable during the development of a large-scale theatrical work, as playwright S. Shakthidharan and Belvoir artistic director Eamon Flack will tell you. But for five years, both have fought hard to retain the authenticity that drives Counting and Cracking, a migrant story told on a grand scale and the most ambitious production Sydney’s Belvoir Theatre has embarked upon in its three decades. To tell this story, they’re taking over the Town Hall for a month, transforming it into a slice of Sri Lanka. “As an independent artist, you're used to compromising,” Shakthidharan says, recalling his close collaboration with Western Sydney communities over the past decade, where he founded cultural organisations Curiousworks and Co-Curious. “You're used to building your practice around the perspective of being happy that you get something done.” Counting and Cracking, which will premiere in January, marks a change for Shakthidharan, who hadn't previously experienced the eye-opening process of “respecting your story and giving it what it deserves”. Spanning across a range of countries and time-zones, the three-act play centres on a mother, Radha, and son, Siddhartha, who’ve embraced new lives in Australia, after fleeing the Sri Lankan Civil War. Their lives are soon upturned by a phone call which brings their past whizzing back to them – four generations of family are brought to life, and history and secrets are revealed. And with a sizeable

You wanna shoot a president? David Campbell takes on a provocative musical role

David Campbell has never played a role like John Wilkes Booth – the American actor who assassinated president Abraham Lincoln. Campbell started his career playing the ‘boy next door’ type before moving into leading roles that drew on his affable personality – music icons Johnny O’Keefe in Shout! and Bobby Darin in Dream Lover: “No one had ever cast me as the ‘character’ before. Booth is charismatic, flamboyant, a Southerner; he can spit out his words – but that turns malevolent very quickly.” Stephen Sondheim’s musical Assassins is coming to the Sydney Opera House next month after an acclaimed season at the Hayes Theatre. The show looks at the killers and would-be killers of American presidents – digging into the motives behind their violent actions which had unsettling effects on the nation. Campbell thinks there’s an inherent moral conflict that lies beneath the character of Booth and his fellow assassins which makes them appear reasonable, despite their disturbed personalities: “A lot of them come from abject poverty: they’re immigrants or the nation has turned their back on them. They have come from abuse from their families [or] they have been kicked out of their homes at 13.” “The American Dream is both the great aspiration and the great fallacy of all time. But they are driven by it, and we can’t help to have tribalism and feel patriotic about where we live. So there is an ambiguity that sits at the heart of America that Assassins really plays on, and the assassins the

Michelle Law is tired of bearing the emotional burdens and everyday racial and sexist microaggressions that come with being an Asian-Australian woman. “When I was working in retail, customers were surprised that I had an Australian accent, or constantly asking you where you’re from. Then you having to say, ‘Sunshine Coast’, and then them asking, ‘Where are you really from?,’” Law says with a grim laugh. “Then you asking them: ‘Where are you really from?.’” Her play, Single Asian Female premieres at Belvoir this month and is the first Australian mainstage play to feature three Asian leads. It centres around the women in a Chinese family, each facing their own challenges. The youngest daughter, Mei, grapples with her identity as the only Asian at her school, and the eldest daughter, Zoe, must choose between her career and family. Their mother, Pearl, struggles to overcome the cultural and generational differences between herself and her daughters. While Law insists the play isn’t autobiographical (her life has previously been the subject of her brother Benjamin Law’s SBS comedy The Family Law), she acknowledges that her characters face similar cultural conflicts to those she encountered growing up Chinese in Queensland. And Law still sees a fair bit of herself in Mei. “She’s really struggling between her Chinese identity but also really wanting to fit in… and also this idea of, ‘Who actually am I?’ She has never really been given the opportunity to explore that because she liv