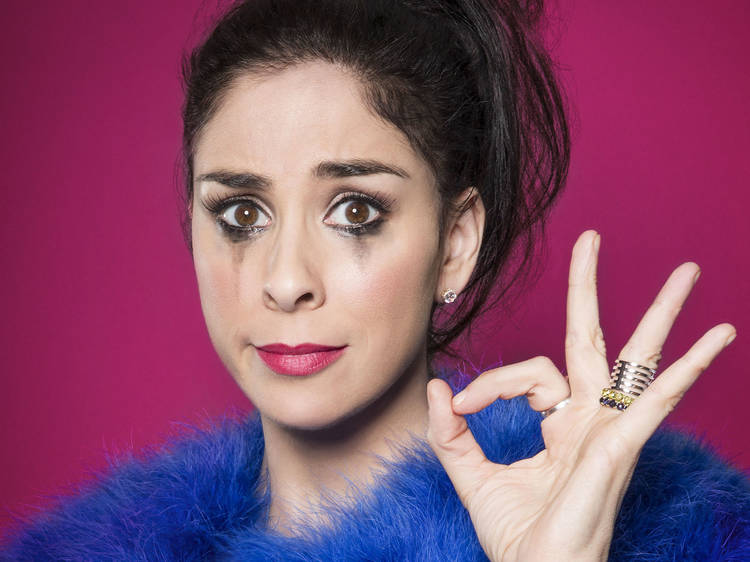 After half an hour behind closed doors, Sarah Silverman emerges from the makeup room of a photo studio and is greeted by a chorus of gasps. Her hair has been teased into an enormous cloud. “What?” she deadpans. “Too much?” The comedy titan has made a career of that sort of thing, tackling just about every controversial topic under the sun with a sarcasm-soaked charm. But perhaps what’s most shocking about Silverman these days is the 44-year-old’s revelatory turn as a mother spiraling out of control because of addiction in the bleak indie I Smile Back. In the film, which costars The Good Wife’s Josh Charles, Silverman embodies pain with the same strangely irresistible gusto she brings to her usual comedic gigs in a tour de force performance that generated buzz when it premiered at Sundance Film Festival earlier this year. We’ve seen Silverman take on addiction before in Sarah Polley’s drama Take This Waltz. But for the first time, we’re seeing the actor go really dark. And she nails it. After the photographer decrees that the hair is indeed too much, Silverman is sent back to makeup. When she returns, she has a more workable ’do and gamely sits in a pile of glitter, clad in a Cookie Monster coat. “What the fuck am I doing?” she says with ersatz ennui, then notices the food that’s been delivered. “Lunch is here,” she says, rebounding into a mischievous grin—ready to openly chat about her own anxiety, happiness…anything. “Let’s talk!” Laney, your character in I Smile Back, is an

Skrillex and Diplo’s soundtrack to everything

EDM ambassadors Skrillex and Diplo grace the Time Out New York cover this week in celebration of their upcoming New Year’s Eve fiesta as Jack U at Madison Square Garden. But not only have these bodacious bros shared their wisdom on how to throw a killer party, they've also bequeathed a gift of their favorite life soundtracks for everything: From bringing up the energy at new year’s eve parties to getting busy between the sheets, these guys have your playlist covered.  The due share their favorite tracks for.. The bedroom Diplo: Busta Rhymes and Mariah. Put ["I Know What You Want"] on.Skrillex: Ashanti and Ja Rule.Diplo: The Flamingo' "I Only Have Eyes for You." You'll have some weird sex.Skrillex: We need to make a song called "Weird-Ass Sex." Chilling out Diplo: I play Van Morrison's Astral Weeks, the whole thing. That relaxes me. Skrillex: Aphex Twin. Or my favorite album of the year, Tycho's Awake. It's so good; it has the best melody ever, like old U2-style Edge guitar and Sigur Ros vibes and amazing productions.  Getting the party started Skrillex: I'll play a Mariah Carey record. Or Toto's "Africa"Diplo: The Fresh Prince of Bel-Air them song. Take it to the next level. My favorite Mariah is "Emotions." Skrillex: The best Mariah is the one that [Sings] "When you left I lost a part of me."Diplo: It's called "We Belong Together." It's all about "Shake It Off," though.  Kicking off your day Skrillex: A big old shot of kale juiceDiplo: No, a song. That's not a song.