Whether you always have two cents (in the form of 140 characters) to add to a headline or are a serial retweeter, Twitter is kind of the best for staying in the know (and happening upon glorious nonsense). With so many Internet spirals calling your name, here's a list of some of the wittiest, most knowledgeable New York-based Tweeters who are also actually paid to write for a living. Of course you already follow Lin-Manuel Miranda and Lena Dunham; from sports writers to theater dorks to professional foodies, here are 20 fellow New York writers whose 140-character count game is always strong. 1. Andrew Kirell@AndrewKirell Both a musician and senior editor at The Daily Beast, Kirell brings his frontman-at-the-mic-bluntness to his writing, both in longform and in short, sweet, Tweets. Check out his mental health take on Bon Iver’s latest album.   2. Caroline Moss@socarolinesays Warning: Tweet scroll hole is inevitable. Now the creative director of CNBC, Caroline Moss has boasted bylines in The New York Times, Cosmopolitan, New York Magazine, Hairpin and many more.   3. Jason Gay@jasongay For those interested in the sports ball, Gay is your man. The Wall Street Journal sports columnist is passionate about a pigskin, but hardly pigeonholes his beat, having nabbed bylines in GQ, Rolling Stone and Vogue. Check out his book Little Victories. 4. Erin Strecker@ErinStrecker Erin Strecker has turned her fandom into a profession. Currently the deputy entertainment editor at Mashable, she

“I love Gene Wilder,” Alyssa Stonoha tells me as she digs into her grilled cheese. It’s a Sunday afternoon, and I'm meeting Stonoha, Sandy Honig and Mitra Jouhari of Three Busy Debras for brunch at Waverly Restaurant to discuss their upcoming surprisingly glitz gig. “I didn’t realize just how much Willy Wonka touched me,” she continues, munching on a french fry. “Oh no! Willy Wonka touched you?!” exclaims Honig as the three burst out into gasps and giggles. It's quickly evident that the three comedians work (and play) seamlessly together, teeing jokes off, making sure they land and then taking them delightfully too far. This Thursday, they'll be taking those jokes all the way to a very unexpected place: Carnegie Hall. The Debras—pulling a straight up Florence Foster Jenkins—are slated to perform at the storied venue on September 22, following in the footsteps of Louis Armstrong, Billie Holiday, Ella Fitzgerald, Judy Garland, Sinatra and Pavarotti for crying out loud. After the American debut of Pyotr Ilyich Tchaikovsky upon the Hall’s opening in 1891, Andrew Carnegie was praised for Manhattan’s new musical and architectural gemstone; “a success at Carnegie Hall would be the litmus test of greatness,” reads a history blurb on the institution’s website. That's quite an accomplishment for a group whose material includes jokes about stiff housewives enjoying bloody brunch and “fuckable” men paying for business cards in questionable ways—this is the kind of material the Debras hav 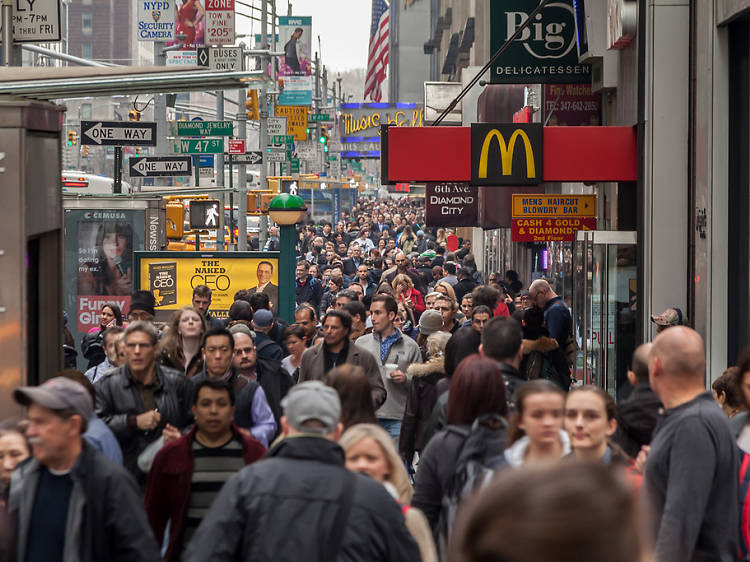 People flock to New York for a variety of reasons. (Here’s 50 if you’re having one of those days where you got stood up by a date, or worse, the MTA.) New York’s food, art, landmarks, traditions and attractions hold infinite possibility for everyone from the wide-eyed newbie to the born-and-raised naysayer. But the greatest thing about New York is the people who make it what it is: a constantly humming hub of cultural phenomena, from Hamilton to the cronut. People come to New York to experience these near-impossible dreams; they stay because of the people they can share them with. So, if this city’s endlessly interesting population of inhabitants is the basis of its lasting appeal, why is it that starting a conversation with a random fellow New Yorker is so terrifying?  Having moved here in April, I began asking myself this question on subway platforms and in coffee shops. Sure, I have great friends, roommates and co-workers to spend my time with. I have been described as “friendly” and “extroverted.” But when it came to chatting up people I didn't know, I would freeze and find excuses: “They look busy” or “Eh, I really like the song that just came on my shuffle anyway.” A friend of mine from college strives to talk to five strangers a day. “Because you never know!” he said when I once asked him why. I was fascinated when he shared this daily ritual with me, and wanted to try it out. There were some rules: I couldn’t meet any of the whopping 35 strangers (that’s five stranger