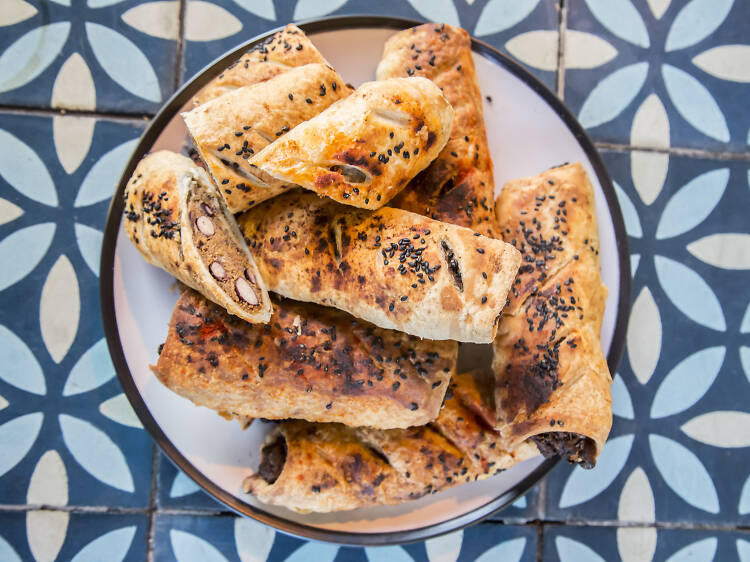 Chefs reveal how they make London's most creative vegan dishes

There are a staggering 750,000 vegans in the UK. For these increasingly discerning legume-lovers, tired portobello mushroom burgers and soggy lentil loaves simply won’t cut the mustard. That’s why London has seen an explosion of plucky independent eateries offering indulgent meat alternatives like fish-free fillets and burgers dripping with ‘cheeze’. The capital’s most inventive kitchen wizards are using creative methods to spice up traditional whole foods, or putting lesser-known Asian and Caribbean ingredients front and centre on their menus. But how does a jackfruit become a vegan chicken wing, or a banana blossom a bit of battered cod? In fact, what actually is a jackfruit? We spoke to four of the capital’s most innovative vegan chefs to get the inside (dairy-free) scoop. Seitan chick’n burgers Rebecca McGuinness, co-founder, Temple of Seitan ‘I worked at KFC when I was a teenager and the chicken was the one thing that I missed after I went vegan. Four years ago, there weren’t a lot of vegan junk food options in London, so my husband Pat and I started making it ourselves at home. There were lots of seitan recipes online and in cookbooks, and so we started by making those. Then we’d try ones with our own flavourings. We’d get home from work and do ten batches, and every batch would have a little bit more or less of something. It was about getting the right flavour profile, texture and  juiciness. Gluten flour is the main ingredient in seitan: we mix that with liquid ing 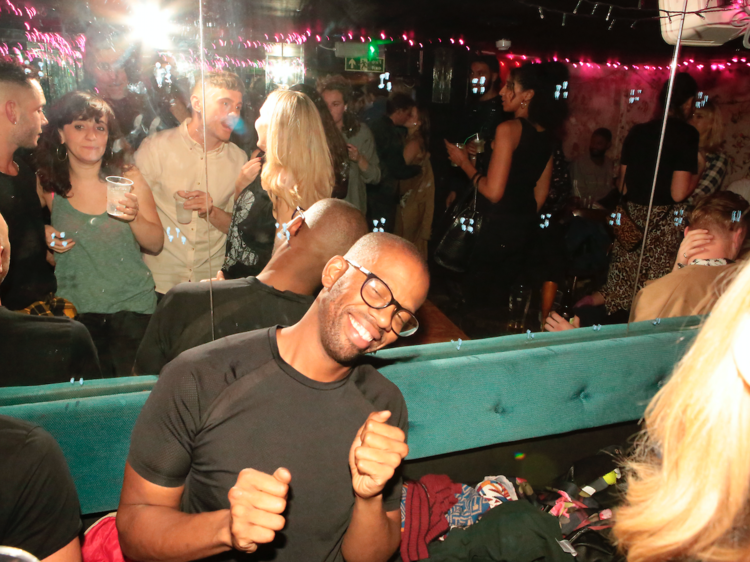 So you’ve never been to... The Queen Adelaide

In a nutshell... It’s a former lapdancing bar helping to keep the LGBT+ flame burning bright in the East End. Where is it? Sandwiched between a handbag shop and a plant ‘conservatory’ on Hackney Road. Helpfully, it’s just a Toto’s whisker away from Savage, the riotous LGBT+ dance party at Metropolis. What’s the vibe? Kitsch, camp and cosy. The whole place is festooned with fairy lights and car-boot-sale treasures. There’s even an animatronic, carrot-chewing horse head that looms over you while you sip your spritzer. What makes it a great venue? While beloved venues The Nelson’s Head and Joiners’ Arms have gone shutters-down, The Queen Adelaide joins Haggerston’s The Glory in offering an authentic slice of LGBT+ life in the area. It’s run by the same folks who helmed local institution The George & Dragon. Who hangs out there? Expect to see local art students and members of the fash pack, plus bar staff who look like extras from Boy George biopic ‘Worried About the Boy’. Romantics love it here too: the dimly lit booths have led to a fair few cases of first-date pash-rash. The maze-like basement still has mirrored walls from the venue’s strip club years, so it’s perfect for a tipsy slutdrop. Recent weekend club nights have ranged from sweaty R&B dance parties to a fantastique celebration of French pop divas. What’s the booze situation? Your standard east London prices: £4.60 for a pint of Estrella, £4.40 for a medium house wine. Finally, what happens to coats that are left in 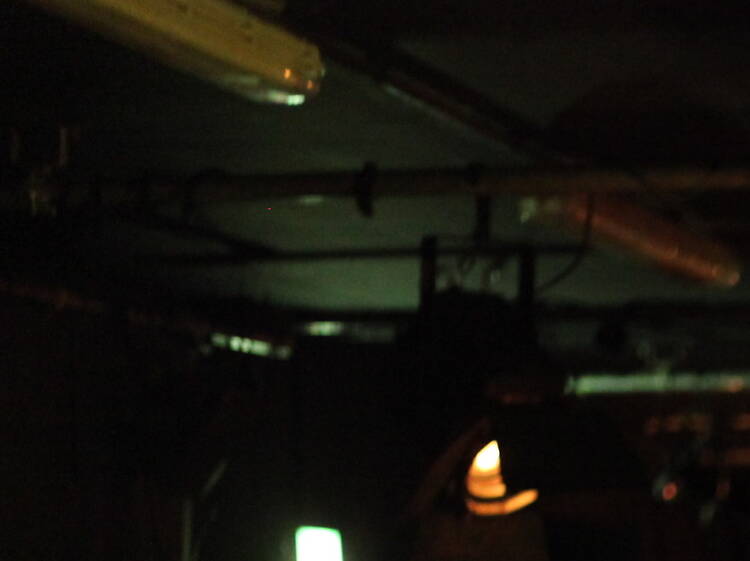 So you've never been to... The Courtyard Theatre

In a nutshell... A tucked-away shoebox of a venue in a flexible theatre complex, with an attached cosy and candlelit bar that’s been responsible for many a mid-week hangover. Where is it? Five minutes up from Old Street tube station – its grown-up atmosphere offers a welcome refuge from the local pubs, which tend to fill up with an after-work crowd. What’s the vibe? Don’t expect a moshpit. The black-walled, 235-capacity studio space attracts clued-up punters who might have moved on from watching bands in local boozers, but still have their ear to the ground. The venue’s ‘Iambic Bar’ is open to all – its intimate feel (and dark corners) make it an inspired date spot. What makes it a great venue? It’s partly the thrill of feeling like you’ve discovered a secret. The Courtyard is located in the basement of the Grade II-listed former Passmore Edwards Free Library, and when you’re down in the sound-proofed venue it feels like a real escape from east London’s bustle. The welcoming staff clearly know they’re on to something special, and the curation is thoughtful and on point. FKA twigs chose this spot for one of her first London shows, and Tori Amos debuted her new album here last year. What’s the booze situation? A not-too-painful fiver for a pint, and a spirit with a mixer for £4.50. Finally: what happens to the coats left in the cloakroom? Every August, the staff have a clear-out and give the proceeds to local charity shops. But one bizarre find survived the cull: a baby monitor 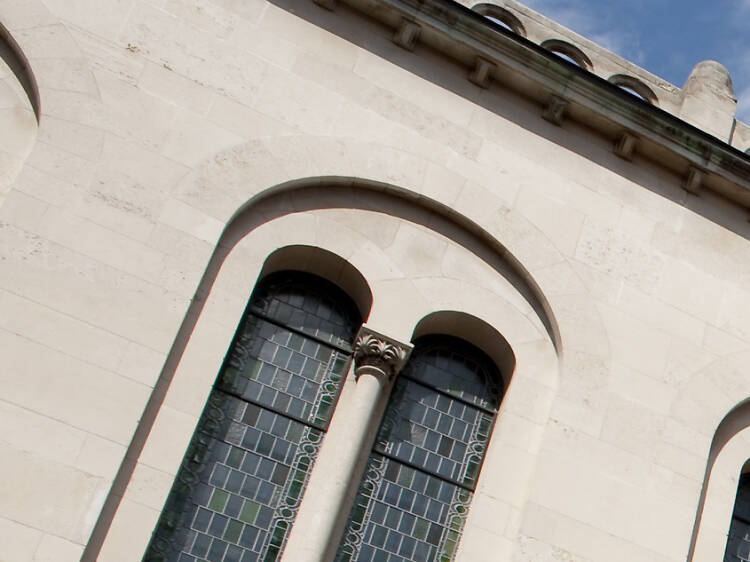 So you've never been to... Cadogan Hall

In a nutshell… It’s a Grade II-listed church that’s been revamped into a classy concert venue. The London Philharmonic calls Cadogan Hall home, but it’s also become a prime spot to catch pop icons and avant-garde innovators. Where is it? In the heart of Belgravia, dahling. Turn right out of Sloane Square station, go past the Royal Court theatre, down Sedding Street and you can’t miss it. What’s the vibe? It’s a world away from venues where punters are elbowing their way to the front. Cadogan Hall is entirely seated, and its high domed ceiling creates a sense of occasion. Expect pitch-perfect acoustics, and look out for the intricate stained-glass windows – they were designed by Baron Arild Rosenkrantz, an artist who trained under Tiffany. What makes it a great venue? Cadogan Hall’s grandeur makes any trip here a treat, but eclectic programming has cemented it as one of London’s most special venues. St Vincent recently sparked a fan frenzy when she announced a last-minute gig here, while cult heroes like Patti Smith and The Magnetic Fields have packed out the space for intimate shows. Expect the unexpected: everyone’s dream uncle/boyfriend Jeff Goldblum is swinging by for a jazz piano set with his band The Mildred Snitzer Orchestra. What’s the booze situation? A very reasonable £4 for a glass of house wine, or £5.50 for a spirit with mixer. Feeling fancy? A bottle of prosecco will set you back £30. Can I expect to rub shoulders with other fancy folks? Oh definitely, judging by 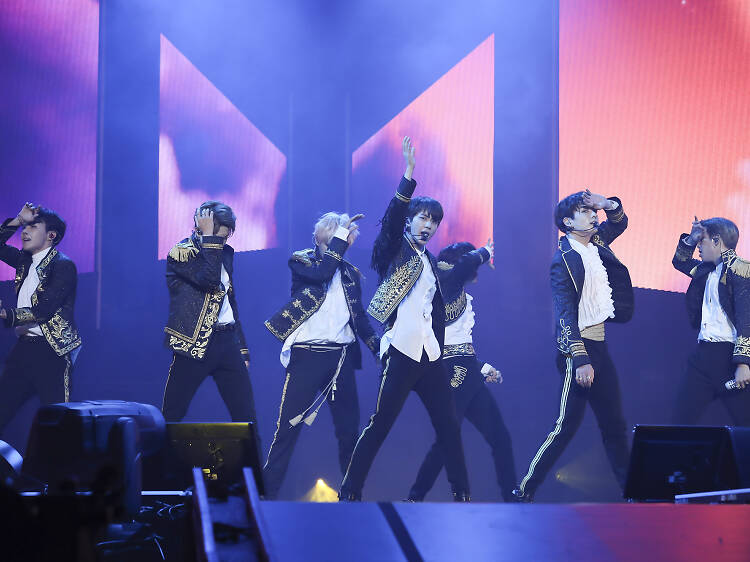 1. Their videos are dazzling works of art  If you miss the seven-figure budgets and eyepopping dance routines of the Britney and Justin era, step this way. BTS showcase their addictive Korean-language mash-up of synth pop, trap and dance in videos with old-school showstopping pizzazz. Their choreography is more intense than a Crossfit session—check out Bambil-ike leaps across floating CGI platforms ("DNA"), and dance-offs with ninjas in post-apocalyptic landscapes ("Not Today"). In 2018, Western pop videos can suffer from a lack of imagination, so BTS’s splurge on creative mini movies is paying off: This August, their eye-poppingly colourful "Idol" video racked up 45 million views in a single day, snatching a record previously held by Taylor Swift (it now has a gargantuan 185 million!). 2. Their fans are unbelievably dedicated Beyoncé’s Beyhive and Lady Gaga’s Little Monsters have nothing on Army, BTS’s continent spanning fanbase. Thanks to their support, the boys already have two US number one albums under their belts. They’ve also become the first ever K-pop group to score a UK Top 40 hit, with "Idol." And last year, they beat off competition from Justin Bieber to be named Top Social Artist at the Billboard Music Awards. But even non-obsessives might be tempted by BTS’s thoughtfully curated physical releases, which often feature collectible gifts like sticker sets and photo books. But as 23-year-old superfan Nadia told us, a band doesn’t get to BTS’s position from retweets

Why some Londoners are ditching dating apps for saunas

Gay dating and sex apps like Grindr, Hornet and Scruff have been gamechangers for gay men like me – they allow us to find guys who are into exactly what we want, when we want, and can be a lifeline if you’re on the downlow. But it’s easy to feel fatigue with disembodied torsos and timewasters. Last year a study by the Center for Humane Technology, surveying iPhone users’ app use, found that Grindr left people feeling the most unhappy and many were disturbed by news that it had shared data on users’ HIV status. Despite – and sometimes in reaction to – the dominance of apps, more and more guys are turning to their local gay sauna. ‘You never get the embarrassing situation,’ says spa aficionado Nick, ‘of meeting someone who looks like your type in pictures, but isn’t in real life.’ Mark, who’s a regular at saunas like Pleasuredrome in Waterloo and Kennington’s The Locker Room, agrees. ‘I find Grindr a bit tedious,’ he says. ‘Sure, there can be waiting around or rude guys, but saunas are laboratories where you can experiment and learn about yourself.’ It seems many gay Londoners feel the same. ‘There’s been a significant increase in business in recent years,’ says Chris Amos, the brand manager at Pleasuredrome. The social aspects can be a draw too, he explains, given the closure of so many LGBT+ bars. And if you’ve already been sharing dick pics on apps, walking around in just a towel doesn’t seem scary. ‘Grindr has mainstreamed the idea of gay men cruising for sex,’ says Mark. C