The 11 best museums in Sacramento

Go deep into California history, politics and art at the best museums in Sacramento

As California’s state capital and first incorporated city, Sacramento teems with history and culture, and you’ll find much of it on display within the best museums in Sacramento. Sacramento was a booming commercial center during the Gold Rush, and the city’s Gilded Age tycoons left behind a rich legacy of art and architecture. The city also served as the western terminus for the First Transcontinental Railroad, and today, features the nation’s preeminent train museum. Plus, did you know that entire blocks of Sacramento were raised in the 1870s, creating abandoned underground spaces that you can explore courtesy of the city’s history museum? You’ll find numerous ways to get your culture on in the Golden State’s capital starting with the following enthralling destinations. Afterward, refuel at one of the best restaurants in Sacramento.

RECOMMENDED: The best things to do in Sacramento 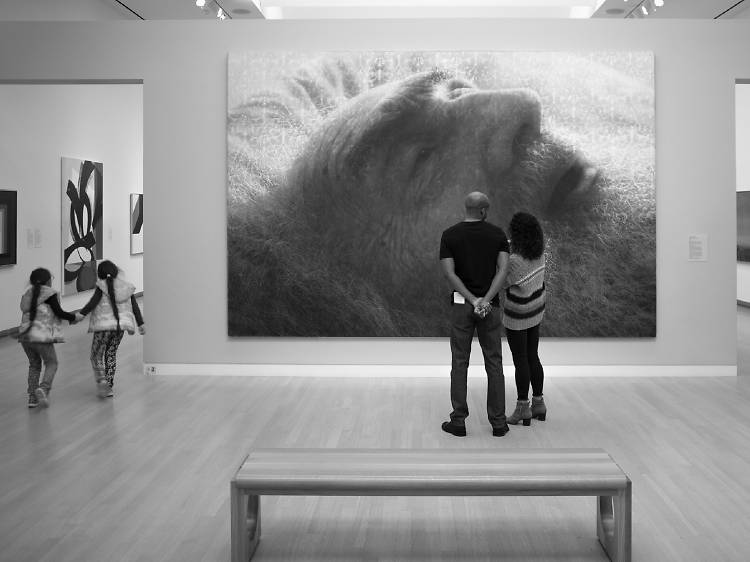 What started as the private art collection and Italian mansion of Judge Edwin B. Crocker, the brother of California Pacific Railroad Company co-founder Charles Crocker, has grown into an esteemed collection of more than 15,000 artworks. The collection is spread across two buildings including the sleek Teel Family Pavillion, which was added in 2010 and more than tripled the museum’s size. In addition to its collection of Californian art, European drawings, and international ceramics (the largest in the U.S.), The Crocker presents rotating exhibits such as a 100th birthday retrospective of Wayne Thiebaud, Sacramento’s most celebrated painter. 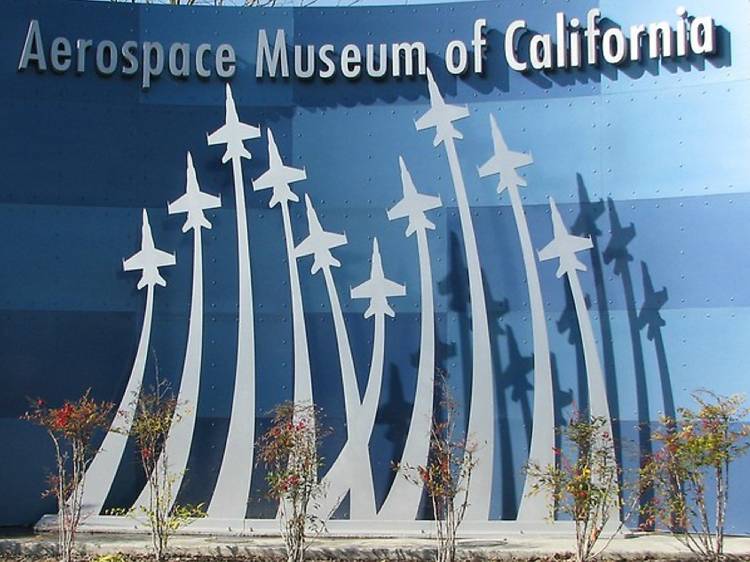 Your spirits will soar at this shrine to aviation with historic aircrafts, rocket engines, and a real-deal flight simulator. Once a part of the McClellan Air Force Base, this off-the-beaten-path treasure displays over 40 aircrafts, from a WWII Douglas C-53D Skytrooper to a 49-ton FedEx Express Boeing 727 that you can tour. You’ll also find an extensive collection of combat planes including the F-4C Phantom II which rockets up to 1,600mph, and an F-14 Tomcat, the jet piloted by Goose and Maverick in Top Gun. Practice your own maneuvers in the Flight Zone where instructors teach newbies how to fly on a state-of-the-art simulator. 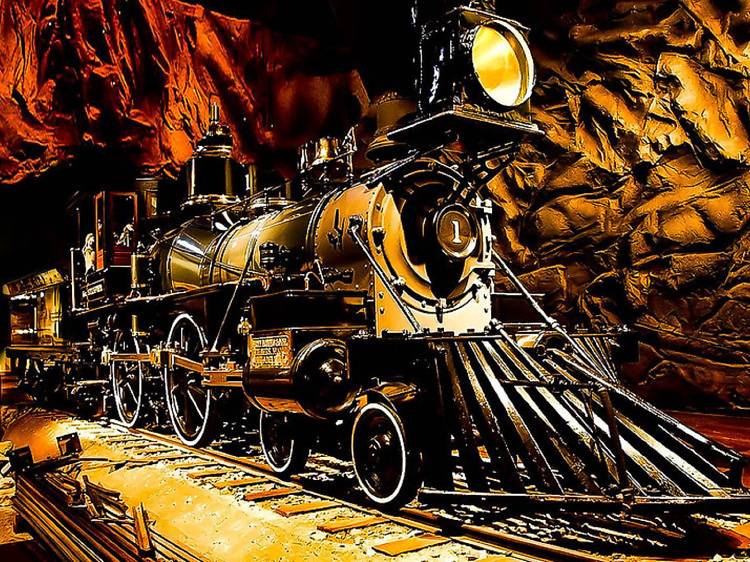 You needn’t be an engineer cap-wearing railfan to enjoy this cavernous museum filled with towering, historic locomotives set in immersive displays. A few steps in, your jaw will drop from the size and craftsmanship of the 1862 Governor Stanford peering from inside a rocky tunnel. Vintage buffs will love strolling a swaying, dimly lit sleeping car and sleek, Art Deco-era dining car displaying old menus and table settings unique to each line. The top floor features an intricate display of toy trains gliding across a sprawling, miniature landscape. 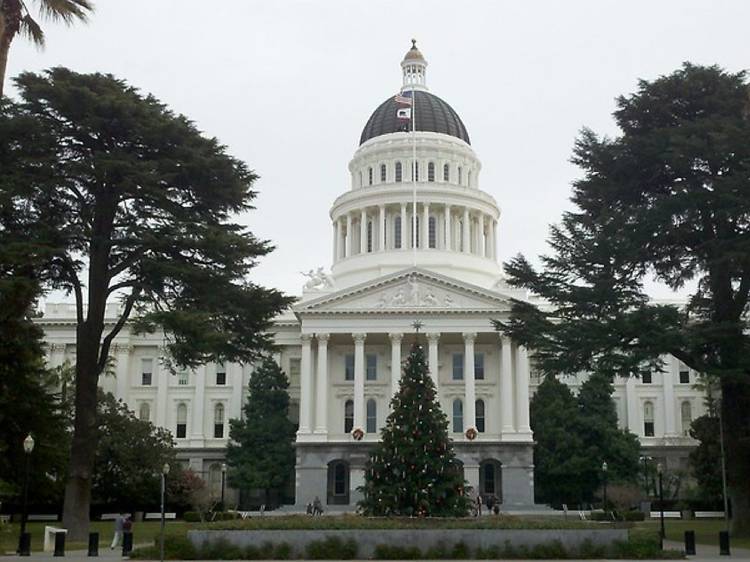 Situated amidst a 40-acre greenbelt, the State Capitol welcomes the public to tour its grand interiors. Start at the central rotunda set underneath a 128-foot high, gilded dome adorned with cast iron grizzlies and Minerva, the Roman goddess featured on the Great Seal. The entire building drips with historic artworks—murals, furnishings, and paintings such as the portraits of 38 governors hanging in the West Wing. Spy replicas of historic offices, and when legislators are in session, Assembly and Senate members debating in their respective galleries. Don’t miss the surrounding Capitol Park and gardens which spans 12 blocks with notable features such as a Civil War Memorial Grove planted in 1897 from saplings plucked from famous battlefields.

Whether you’re a lifelong resident or vacationing visitor, you’ll appreciate this contemporary collection of interactive exhibits on California’s trendsetting culture and innovative figures. It’s home to the California Hall of Fame whose pioneering inductees span Walt Disney to RuPaul, and Remarkable Women which highlights the state’s many female trailblazers. The museum encourages visitors to learn the history of injustices including the internment of Japanese Americans during WWII, and take a stand against intolerance with its Unity Center. Plus, learn how it all began with the 31st Star exhibit which details the 31 tumultuous steps to statehood in 1850. 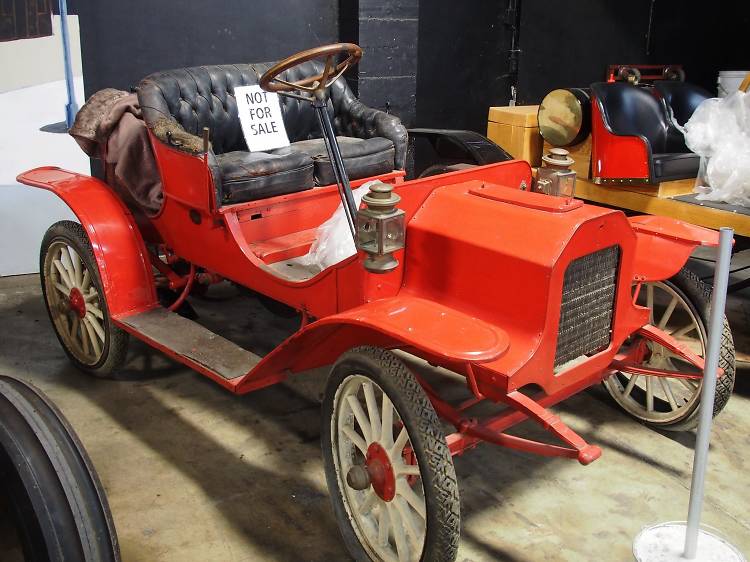 Cruise on over to this dreamy collection of more than 120 vehicles, from an old-timey 1886 motorwagon to a gleaming Nissan LEAF. Though presented as an auto museum, there’s plenty to please non-gearheads including a wacky 1971 Star Streak motorhome and a 1981 Delorean (sans the flux capacitor). Plus, the 1970s AMC Pacer offers some levity amidst testosterone-fueled machines such as a 1967 Charger Fastback and 1969 Mustang Boss 302. Rotating exhibits offer the chance to see fun cars such as the original Batmobile, while a workshop series lets you hop behind the wheel of a Model T and learn how to tune-up your own car. 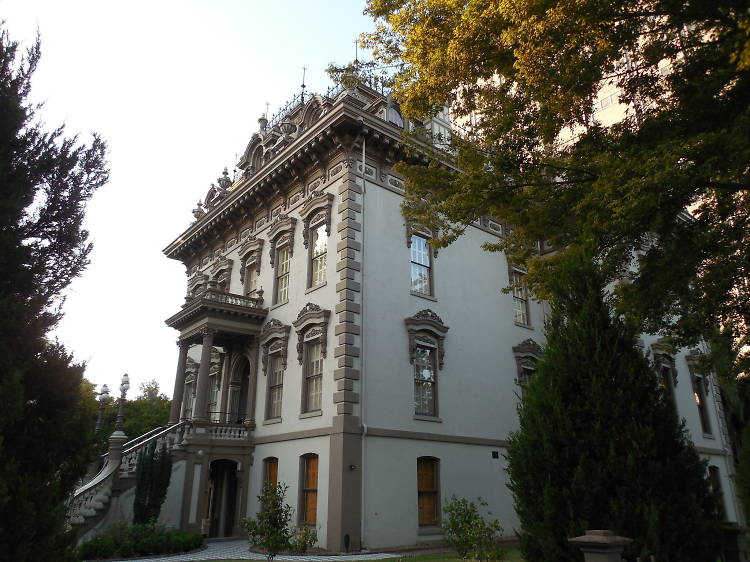 What is it? The palatial former digs of Big Four railroad magnate and Stanford University founder, Leland Stanford. Get a glimpse of the Gilded Age’s 1% on this guided tour of the Stanford family’s 14,000-square-foot home. Leland Stanford acquired the home in 1861, the same year he was elected governor of California. He was also president of the Central Pacific Railroad, and used his office to advance legislation that would ensure completion of the Transcontinental Railroad. Stanford’s ensuing wealth is evident in the manion’s lofty 17-foot ceilings, ornate fixtures, and gilded furnishings—look for waterlines on the cabinets caused by the city’s numerous floods during the mid-1800s—all of which have been restored via a 14-year, $22 million dollar renovation. 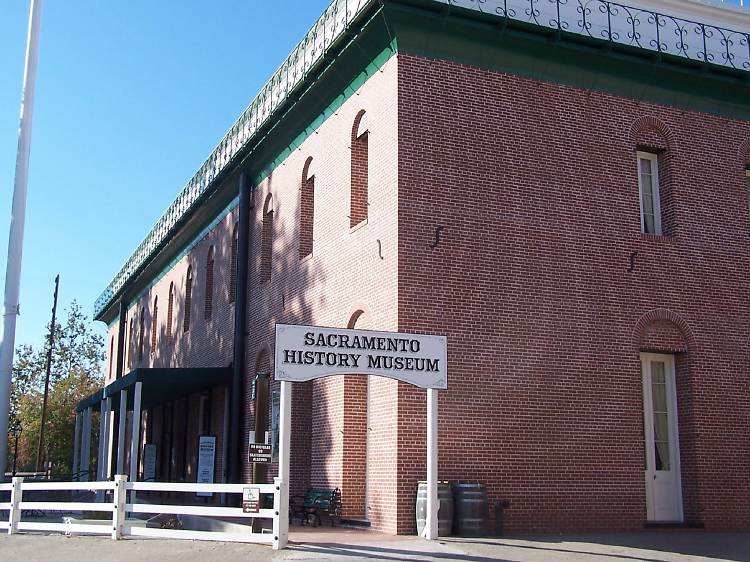 Housed in a reproduction of the 1854 City Hall and Waterworks building, the museum fills two floors with exhibits on the city’s significance during the California Gold Rush and as an agricultural hub starting in the early 1900s. Even if you don’t try and swipe the museum’s $500,000 worth of gold, you can still get a personalized “Wanted” poster printed in a historic print shop. Yet, the museum’s biggest draw might be the guided tours that lead participants into the subterranean realm hiding beneath Old Sac, the result of the city raising its streets during the 19th century to avoid flooding from adjacent Sacramento River. The 21 and over crowd can opt for after-hour tours where the tales get more lurid, and the tour ends with a drink in a historic saloon. 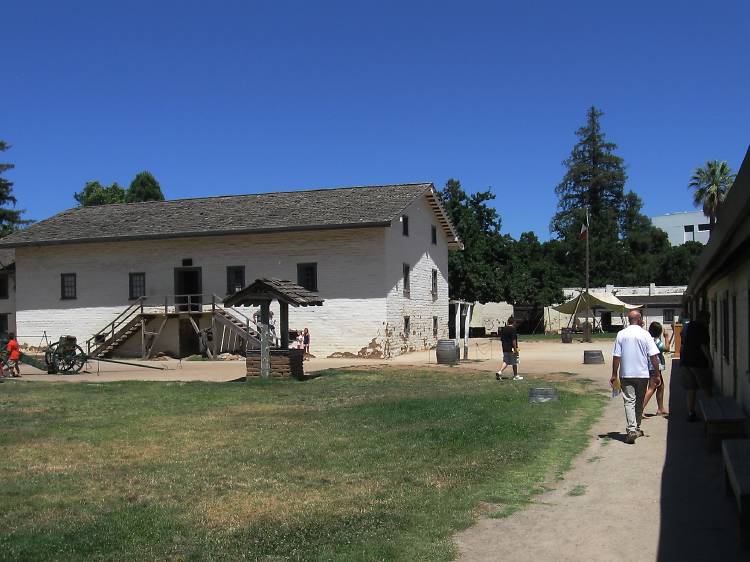 This is the 1840 stronghold of John Sutter, the landowner and businessman whose sawmill employee became the first non-indigenous person to discover gold. John Sutter’s adobe fort is all that remains of New Helvetia, the land that the Swiss immigrant presided over before hordes of miners overwhelmed the region during the Gold Rush. Inside the 1840 Spanish-style structure, you’ll discover rooms and objects that reflect life during the California’s Mexican rancho days. During the summer, the Movies at the Fort series screens family-friendly flicks such as “Jurassic Park” on the fort’s historic walls while crowds sip cocktails and watch from picnic blankets spread across the lawn. 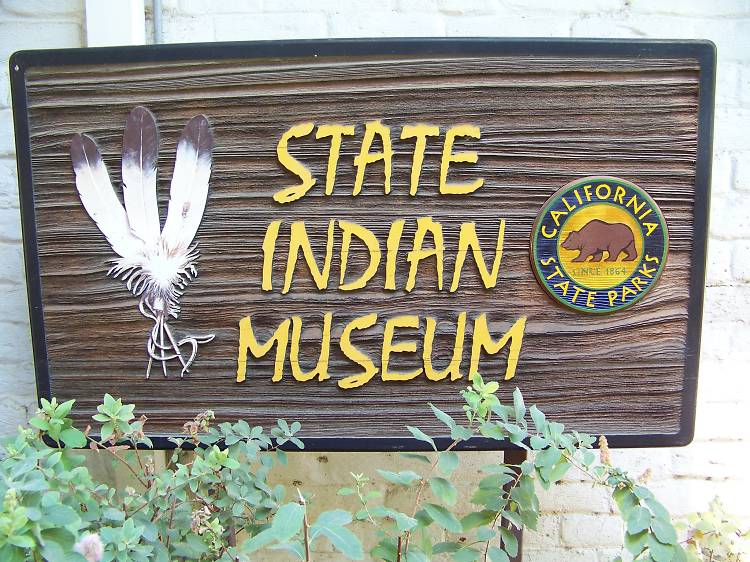 While numerous museums detail the bearded gold-seekers who flocked to California in the mid-1880s, the State Indian Museum is the only one dedicated to the culture and story of the native people who occupied this land for 14,000 years prior to the arrival of the Spanish. Discover the lifestyles and spiritual connection to the earth held by California Indians via objects such as redwood canoes and intricately woven baskets, and learn the story of Ishi, a member of the now extinct Yahi tribe, who shares another perspective of California history: how The West was lost. 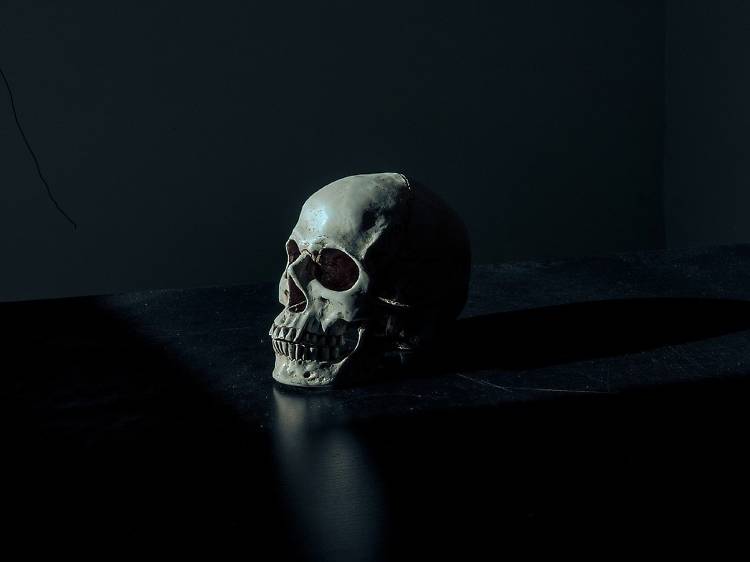 rom Civil War amputation kits to hemorrhoid tablets, this cabinet of curiosities delves into the medical practices and quackery from the 1880s onward. Amidst jars filled with gallstones and cat fetuses, this museum staffed by medical professionals offers a fascinating glimpse at the evolution of modern medicine. Anti-vaxxers will want to get a peak at the Jules Verne-esque iron lung used to help polio victims breath, before vaccination eradicated the disease in the 1950s. Less celebrated are the handheld fluoroscopes—used by early radiologists to peer into patient’s bodies before radiation struck them with skin cancer—and the dubious Nerv-O-Meter employed by dodgy chiropractors.