The 15 best breweries in San Diego

San Diego is to craft beer what Napa is to wine. Well-renowned as the Capital of Craft, this city isn’t new to the game — the best breweries in San Diego are part of a decades-old obsession. The sunny coastal town saw its craft beer scene take shape in the 1980s with the pioneering brewpub Pizza Port, followed by a secondary wave of breweries including Stone and Alesmith. As these initial spots flourished, they fostered subsequent generations of brewers who would eventually branch out on their own. Fast-forward to today, and there are more than 150 independent breweries in San Diego County (and the nightlife in San Diego is beer-heavy as a result).

While visiting the tasting room at each individual brewery is always a good time, most local bars and restaurants also have beer lists that showcase the region’s bounty of quality brews. San Diegans would agree that IPAs reign supreme as the city’s unofficial beer style, but there are plenty of options on tap for those who prefer fewer hops. The majority of breweries have rotating food trucks parked outside on weekends (unless they have their own on-site kitchen, of course), and if not, will kindly let you bring your own food. Many tasting rooms are also dog-friendly and family-friendly.

Time your visit during the epic San Diego Beer Week in November (look for cheap hotels in San Diego here), and you’ll sample the region’s latest boozy trends and offerings. For any other time of year, the following list should provide a worthy overview of the best breweries in San Diego’s booming craft beer scene.

RECOMMENDED: The best things to do in San Diego

One of San Diego’s fastest-growing breweries, Modern Times is fiercely independent and all-around good fun. West Coast beer lovers will be familiar with this employee-owned brewery whose 16 oz. cans of Fortunate Islands, Lomaland, and Fruitlands fill local store shelves. It’s hard to go wrong with any release, but don’t miss the java-infused brews that incorporate the company’s house-roasted coffee (such as the Black House stout). You can sample them at the brewery’s three stylish outposts, from the flagship Lomaland Fermentorium to the North Park Flavordome and the Far West Lounge in Encinitas. Join the League of Partygoers and Elegant People, and get preview tastings, first dibs on rare releases (including exclusive barrel-aged beers), and a prized invite to a welcome party.

Now one of the largest breweries in the nation, Ballast Point is easily recognized by its artsy beer labels that feature an array of colorful fish. Launched into popularity with its hoppy Sculpin IPA, Ballast Point is now a San Diego institution. Visit their tasting rooms in Little Italy or Miramar, or their Home Brew Mart if you're into DIY beer. Look for their seasonal and limited-edition brews, or play it safe with one of their year-round favorites like the Grapefruit Sculpin.

Stone Brewing is considered local brewery royalty, presiding over a collection of timeless brews and two of the region’s most impressive taprooms. Founded in 1996, Stone has since grown to become San Diego’s largest craft brewery—it’s also one of the largest independent breweries in the nation. These days, Stone offers much more than just the Arrogant Bastard Ale; their HQ in Escondido, called the World Bistro & Gardens, rivals winery estates for magnitude and beauty. Two bars (one indoor, the other set on an outdoor patio) pour 36 rotating house and guest beers while a one-acre, creek-lined garden is dotted with seating. Stone’s commitment to pure ingredients in their beer translates to the brewpub’s food menu with locally-grown produce informing items such as charred Brussels sprouts with candied bacon or ahi nachos with marinated cucumbers. Pick up some beer to-go, as well as other merch at the adjacent company store, or head to the second sprawling World Bistro location in Point Loma’s Liberty Station.

Craft beer forefathers dish up killer pizzas and hoppy brews at Pizza Port. As one of San Diego’s first craft brewers, Pizza Port has amassed inumerable awards since opening its original Carlsbad location in 1987. The brewery’s Swami’s IPA—named for a famed local surf break—and Kook double IPA are local staples. At one of their four brewpubs, pair a pint with classic and creative combos such as the Pizza Carlsbad (made with pesto, grilled chicken, artichoke hearts, and feta). Don't miss out on their signature Beer Buddies, pieces of pizza crust dunked in either ranch or marinara.

This Mexican-inspired brewery blends San Diego’s craft beer and Latino flavor. Border X goes beyond the ubiquitous Mexican lager with inspired creations such as their Horchata Golden Stout, or their hibiscus and agave-fueled Blood Saison. Swing by their street-art adorned taproom in the hip Barrio Logan neighborhood for street tacos, an outdoor patio garden, and requisite beer garden games such as cornhole and Jenga. Check their Instagram for weekly events including guest DJs, Lotería night, and Latin music jams.

This small-batch brewery taps delicious, tropical-inspired beers with a strong sustainability ethos. Before opening their Miramar brewery, owners Jesse Pine and Mat Robar brewed in the jungles of Costa Rica — at Pure Project, they expanded on this experience with tropical flavors and a commitment to pure, local ingredients. You’ll taste it in brews such as the Tropical Mist blonde with organic Valencia oranges, or the Milagro stout brewed with Costa Rican shade-grown coffee. Plus, don’t miss their seasonal imperial stout releases including the Maplesaurus Rex with maple syrup and vanilla. Their laid-back Miramar brewery and taproom features tropical touches such as a moss wall and lots of greenery, while a stylish new Bankers Hill locale lends an ideal spot for a cold one after exploring Balboa Park. They also have tap rooms in North Park, Carlsbad, and Vista. 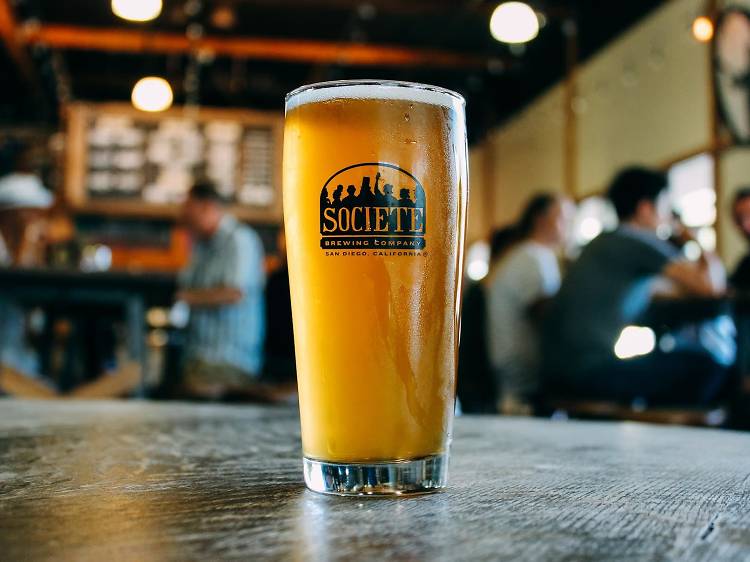 Well-regarded for their IPAs, this Kearny Mesa brewery is equally adept at Old World styles. In a region famed for its IPAs, Societe stands out. Founded in 2012, the brewery’s Pupil IPA is already a local standard, and their Coachman session IPA nabbed gold twice at the Great American Beer Fest. But don’t overlook their Belgian-inspired beers — their exceptional Harlot blonde ale happens to be one of our favorites. If you’re looking to linger at their Kearny Mesa brewery and taproom, a sprawling outdoor patio and taco truck will round out any visit.

With tasting rooms in Miramar (18 taps) and Leucadia (30 taps), Saint Archer is known for its trusty favorites like the Pale Ale, Hazy IPA, Tropical IPA, and Blonde Ale. Beyond the staples, don’t miss seasonal beers like the Blackberry Gose and Mozy 7 IPA. Their Miramar tasting room is situated at the front of their brewery warehouse and includes a large outdoor deck with food trucks on-site Thursday through Sunday.

This rollicking downtown brewpub pours beers from a homebrewing champ. Before opening Resident, Robert Masterson was a fixture at local homebrew contests, racking up awards with creations such as a pina colada-inspired coconut IPA (which was released by Stone Brewing after Masterson landed in first place at an American Homebrewers Association competition). In 2013, Masterson opened up his first commercial brewery at The Local Eatery & Drinking Hole, a downtown joint. At the boisterous, warehouse-like spot, sample Masterson’s handiwork, like his famed Vacation Coconut IPA, alongside brew-friendly grub such as shrimp diablo tacos and the Local’s signature Big Ass Nachos.

This venerable brewery features one of San Diego’s largest tasting rooms and a legendary stout. Founded in 1995, AleSmith is a household name in the San Diego brew scene. Each of their year-round brews drink like an archetype of their respective style, from the simply titled IPA to the Wee Heavy Scotch Ale. Even so, it’s their rich and robust Speedway Stout that garnered the most acclaim and spawned countless variations (including a Vietnamese coffee and bourbon barrel-aged rendition). Check out their cavernous tasting room that hosts regular food trucks and includes a mini museum to Padre Hall of Famer Tony Gwynn. Their San Diego Pale Ale .394 also pays tribute to the late baseball legend—let’s call it a home run. 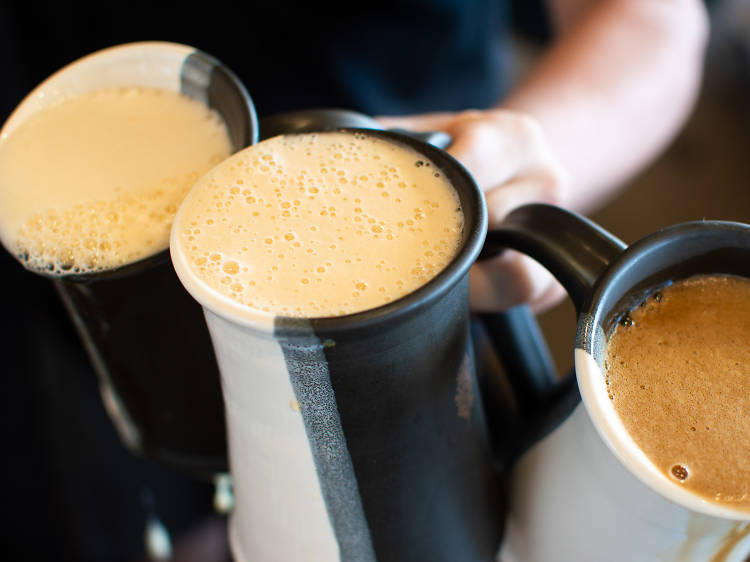 Drink in the views at this picturesque Del Mar brewery. Overlooking the expansive, wild preserve of San Dieguito Lagoon, the aptly named Viewpoint—Del Mar’s first brewery—features what are possibly the most striking surroundings of any local brewery. Nab a seat on the shaded patio and enjoy a Moe'saic Pale Ale or Penitent Man IPA. Paired with scenic views and refined fare (including adovada lettuce wraps and smoked gouda mac n’ cheese with chorizo), a visit here is hard to beat.

Come as you are to this laid-back North Park brewery—an outdoor mural featuring artists like as Iggy Pop and Joey Ramone is your first hint of the punk rock ethos that pervades this down-home, neighborhood hang. It’s kid and dog-friendly, plus you can bring in your own food. It doesn’t hurt that the pints are reasonably priced, too. You’ll find that most patrons fill their glasses with Green Hat IPA, but don’t overlook the Euro-style brews such as the bourbon barrel-aged Jinxremover imperial black lager. The taproom fills up fast, so make sure you get there early.

Burgeon draws crowds to its three tasting rooms (Carlsbad, Little Italy, Escondido) with tasty IPAs. Hidden behind a boxy, corporate park facade in Carlsbad, you’ll discover an airy, industrial-chic interior constructed with recycled materials including wood from the devastating Cedar Fire, and a bar fashioned from a repurposed shipping container. The brewery is noted for its IPAs and philanthropic efforts, both evidenced in their Reclaim the Wild IPA which benefited the National Forest Foundation, part of Burgeon’s pledge to plant 25,000 trees in one year. Other notable brews include the Treevana IPA and a host of hazy brews such as the Lost Forest.

While this San Marcos brewery features a lineup of the usual West Coast styles, it’s primarily known for its tart kettle sours. Their popular Vice series features numerous Berliner Weisse-style releases brewed with fruit such as pink guavas, Montmorency cherries, and black currants. The brewery is located next to a popular axe-throwing venue which you probably want to visit before ordering your first flight of beer. What are you waiting for? Chop chop!