The 18 best restaurants in San Diego

The best restaurants in San Diego serve up fresh seafood, creative tacos, and juicy carnitas on the daily

While beach towns are often regarded more for their surf and sun than their savvy dining, the best restaurants San Diego prove to be an exception—from stylish dining rooms to casual beachside eats, the coastal city bursts with creativity and bonafide kitchen chops.

While it once sat in the shadows of Los Angeles' flashy dining scene, San Diego has attracted several big name chefs in recent years, including Richard Blais, Brian Malarkey, and Claudette Zepeda (of Top Chef fame). Now, San Diego stands firmly on its own culinary reputation, popular enough that dinner reservations are recommended in bustling areas such as Little Italy, La Jolla, and the Gaslamp Quarter.

Looking for a signature dish? If there’s a staple order, it’s Baja-style fish tacos paired with local craft beer (likely a hoppy IPA from one of San Diego’s many craft breweries), a bright combo that’s perfect in the city’s gloriously sunny climate where dining al fresco (or inside chic, open-air spaces along its best beaches) is possible year-round. So if you’re headed to this coastal hot-spot, check out our list of the best restaurants in San Diego—and don’t forget to bring a healthy appetite.

RECOMMENDED: the best things to do in San Diego 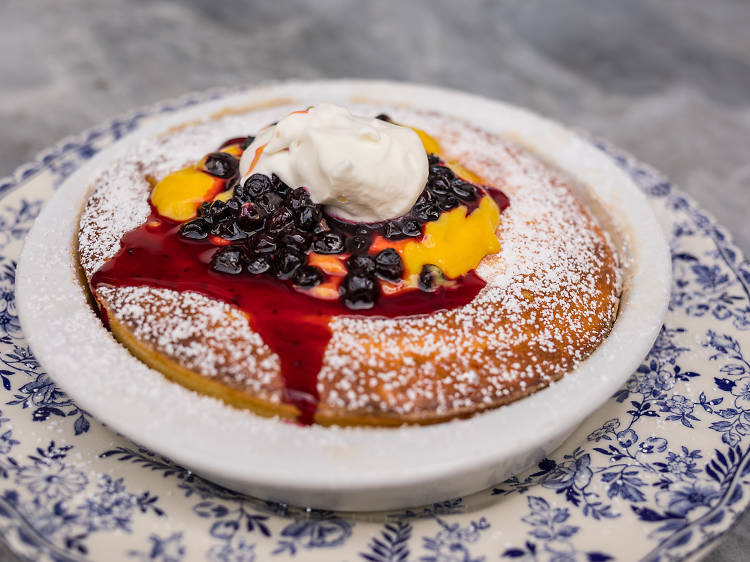 A former rubber band factory, this cavernous space bounced back as a striking open-air dining room with vaulted ceilings, flickering gas lamps and enough potted plants to fill a greenhouse. Seasonal Mediterranean-inspired dishes are roasted in a wood-fired oven such as oysters and bone marrow, Baja shrimp, and baby carrots served with a cashew sesame dukkah sauce. During the daytime, hit up their casual, adjacent cafe Herb & Eatery for grab-and-go bites. 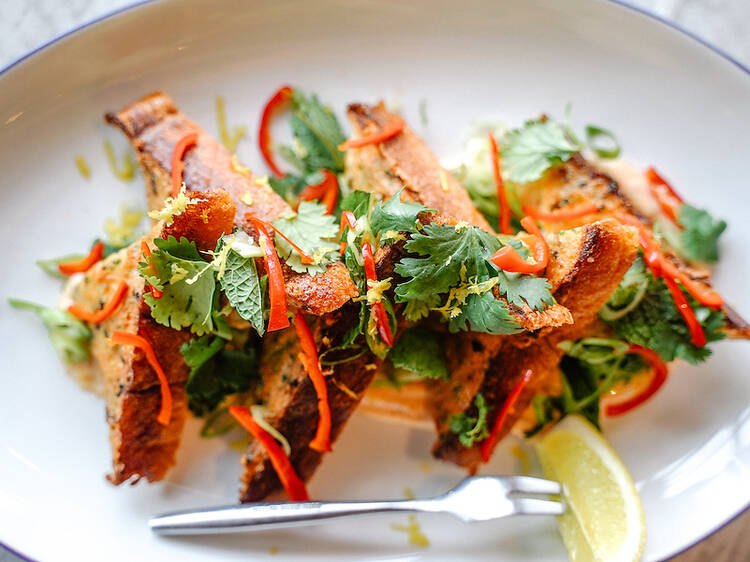 Quite possibly the hottest reservation in Encinitas, Herb & Sea, the sister restaurant of Herb & Wood, serves modern seafood in a lively atmosphere. There's a good variety on the menu here, including raw bar plates, appetizers like a shrimp toast, and irresistible entrees like whole branzino and wood-fire pork chop. Be sure to arrive early if you want to nab a seat at the bustling bar, or reserve well in advance if you’re keen to try the restaurants new Sunday brunch. 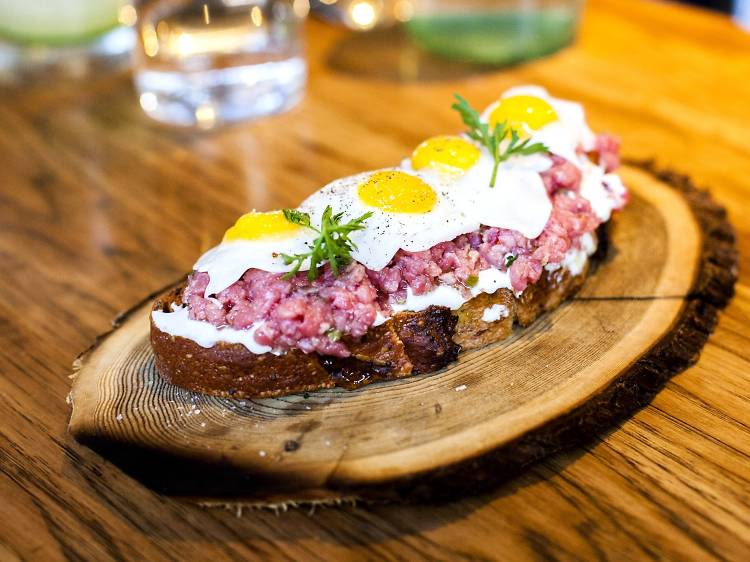 This lively, upscale restaurant is a standout among San Diego’s food and drink-obsessed Little Italy neighborhood. The airy dining room continues to be packed out by locals, thanks to chef Anthony Wells' continually shifting, inventive menu. We're talking delicious small plates and culinary-inspired cocktails. Recent standouts include an uni linguine, whole roasted duck and the Kiwi - Do You Love Me? vodka cocktail. 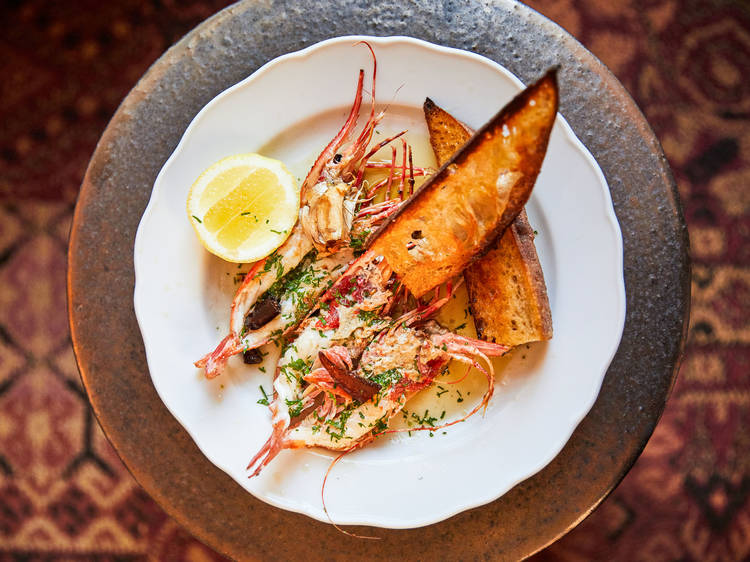 This modern, Mediterranean-inspired restaurant lives up to its Greek name, which translates to 'the most beautiful.' Chef Travis Swikard has serious street cred having cooked under French chef Daniel Boulud in New York City for years before returning to his SoCal hometown. At Callie, he sends out beautiful and thoughtfully-plated dishes like spot prawns al ajillo, aleppo chicken, and pappardelle with a spicy Korobuta sausage ragu. Starters like the hummus and avocado labneh pair well with any of their innovative cocktails. 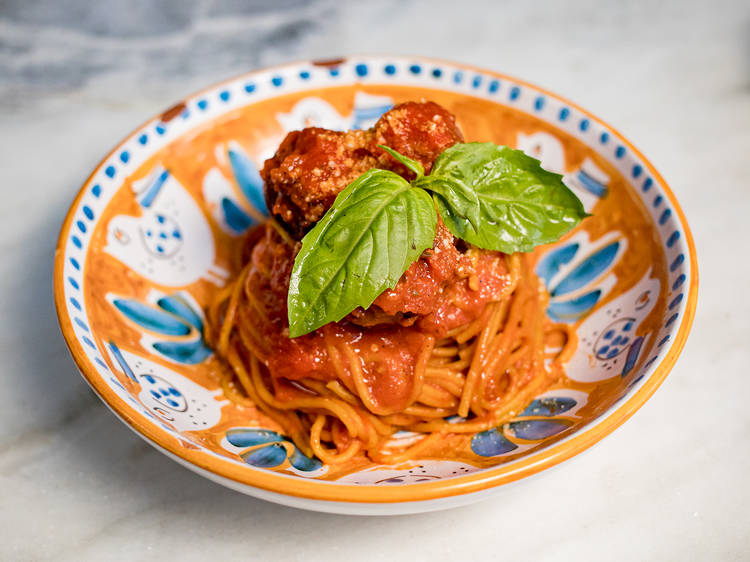 Based solely on the in-house pastificio (pasta factory) on display in their dining room, Cesarina knows its dough. Create your own pasta dish, or choose from one of their favorites such as pappardelle shortribs or paccheri vodka and scampi at this charming neighborhood Italian spot. Don't skip on the antipasti options like fried squash blossoms or calamari, and save room for sweet treats including cannoli or tiramisu that's prepared tableside. 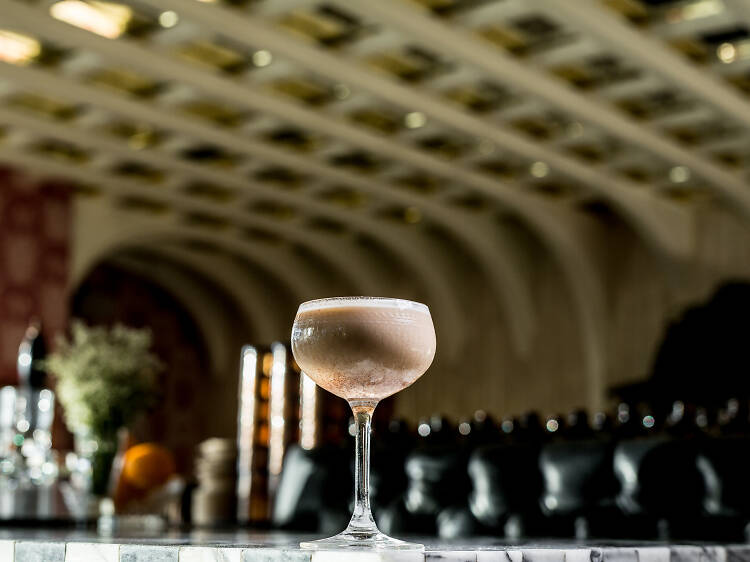 All hail seitan at this singular cocktail bar with exceptional vegan dishes, Victorian elegance and ravishingly sinister heavy metal flourishes. Mixing equal parts heaven and hell – pink toile wallpaper is the background for a devilish wolf sculpture – Kindred serves divine vegan dishes such as char-grilled seitan skewers and battered hearts of palm flatbread alongside exquisite cocktails blackened with activated charcoal and served on pentagram coasters. A trip to the bathroom yields a virtual art gallery of malevolent dudes and their cats. 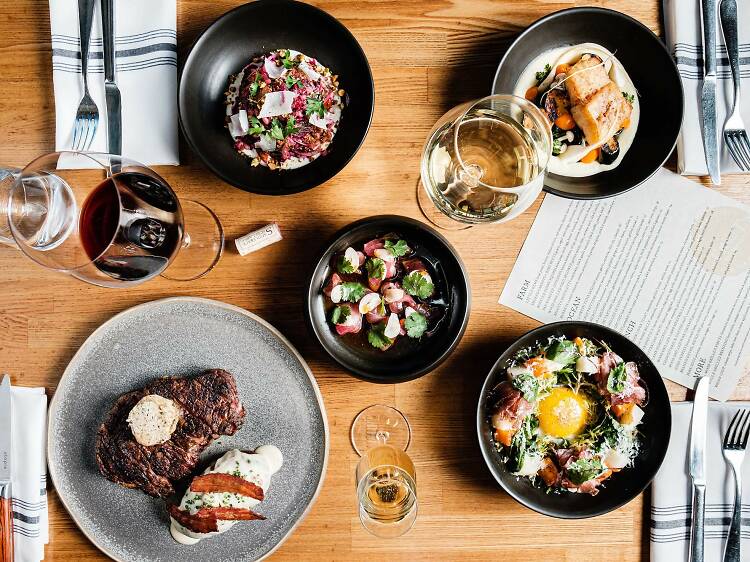 This stylishly casual restaurant has a loyal following for its beautifully plated, rustic dishes. When you walk in, the fragrant wood stacked in front of the open kitchen is the first hint of the meal to come. Chef-owner Brad Wise melds a farm-to-table ethos with wood-fired hearth for deeply flavorful dishes such as smoky cauliflower, grilled oysters and braised oxtail raviolini. Grab a pre-dinner drink at their sister restaurant, Rare Society, a few blocks up the street. 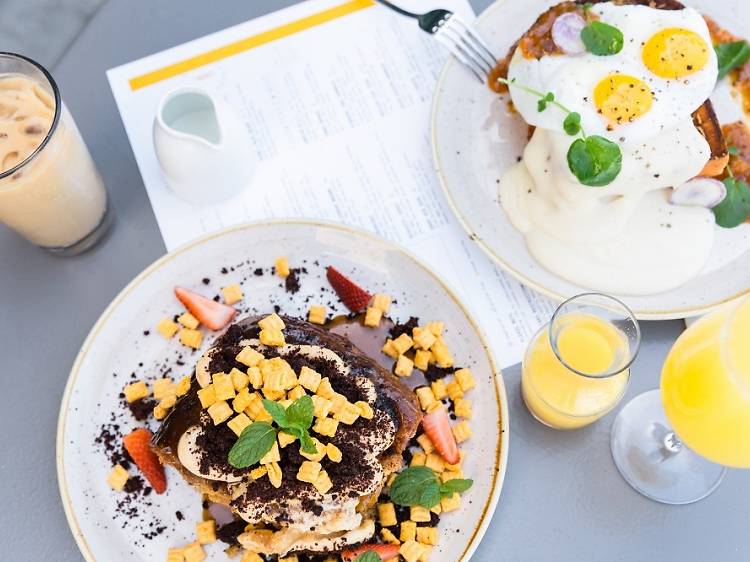 A boisterous Little Italy spot might not be the seafood restaurant your grandparents had in mind – shellfish platters range from big to bigger to 'holy shit' – but groups of stylish youngins keep things humming with Mai Tais and plates of local uni, grilled octopus and buttery lobster rolls. Swing by the marquee-bulb–lined raw bar for weekday happy hour to score $1 oysters and $7 paloma cocktails. 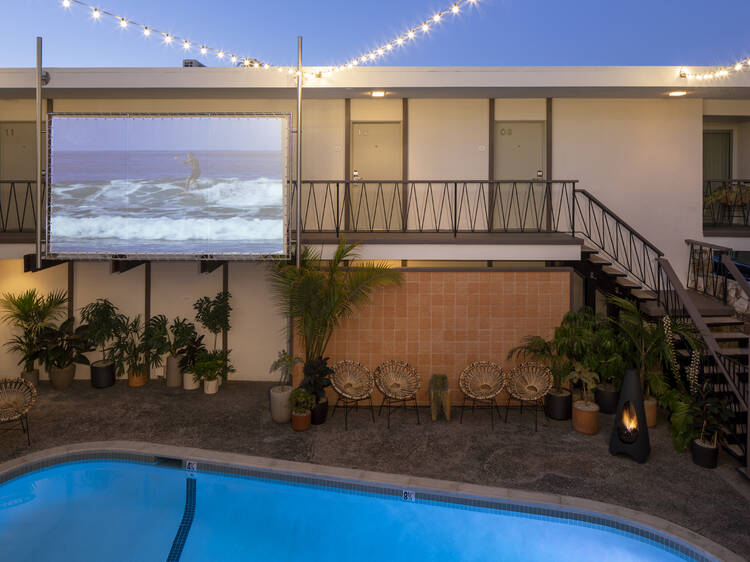 Set within the bamboo-shrouded poolside courtyard of the retro-mod Pearl Hotel, this effortlessly cool restaurant has atmosphere for days. Sip bright cocktails and share platters of sticky wings, mushroom gnocchi and Japanese fried chicken. On summer Wednesday evenings, the restaurant throws 'dive-in movie' parties with classic flicks such as Back to the Future screened above the oyster-shaped pool. 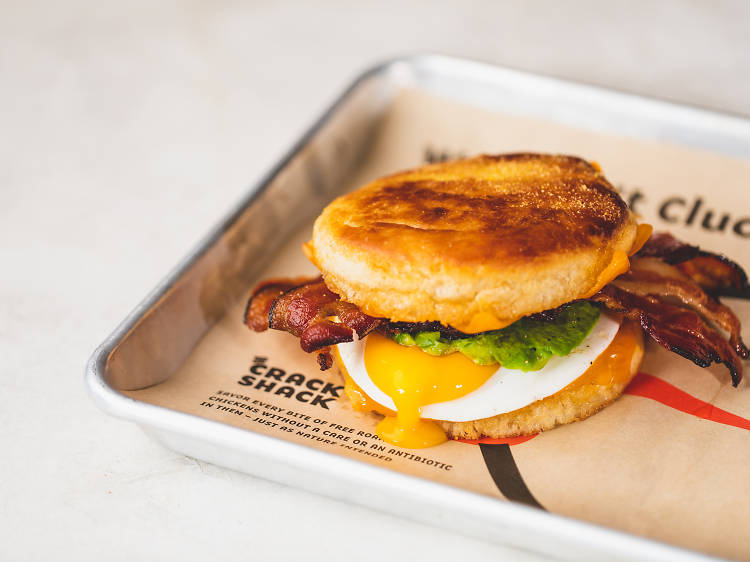 The adorable outdoor setting at this stylized coop features picnic tables and red farm chairs set under strung Edison bulbs, a lively al fresco bar and a kitchen housed in a modern barn structure. Yet, there’s some serious brawn behind all the playfulness. Owned by Chef Richard Blais of Juniper & Ivy next door, the Crack Shack serves guests fried Jidori chicken – tucked into sandwiches or splayed on paper-lined metal trays – along with sides such as a Mexican poutine with schmaltz fries and house condiments including Sriracha Thousand Island and kimchi BBQ sauce.

This sceney Little Italy restaurant draws a fashionable young crowd with daybeds, cocktails and shareable plates. The handsome bi-level space features a ground floor dining room and an upstairs lounge linked by a towering indoor tree, but the best seats in the house are the semi-private cabanas on the rooftop terrace. Wherever you get settled, you’ll find an upbeat crowd mingling over tables strewn with spicy shrimp, pork belly buns and duck meatballs.

A taqueria in historic Barrio Logan, Salud offers so much more than the humble taco. You can get homemade tortillas morning till night at this beloved shop. And look out for their daily specials like free chips during happy hour (weekdays from 2-5pm). On Tuesdays you can get three tacos for $6, and on weekends you can bag the Taco Shop Burger with fries for just $11.

This funky burger joint is a San Diego institution and a welcome throwback to vintage SoCal beach towns. Named after what surfers used to call landlubbing posers, the neighborhood beach shack on Ocean Beach’s main drag is plastered in surf stickers and weathered license plates. The cheap, sloppy, delicious burgers–served from a sidewalk window or at tables dotted with hot sauce and ketchup bottles–have made it a mainstay since 1969. A visit to their downtown location tends to yield a shorter wait time.

Wes Anderson would feel at home inside this clubby, atmospheric cocktail bar with fanciful taxidermy and oil paintings of animals. The dimly-lit den attracts a cocktail crowd with serious talent behind the bar, but a menu that showcases exotic meats – ergo, the wild animal decor – more than measures up. Highlights include bison tartare, red deer sliders with smoked gouda and rabbit dumplings with pickled onions. 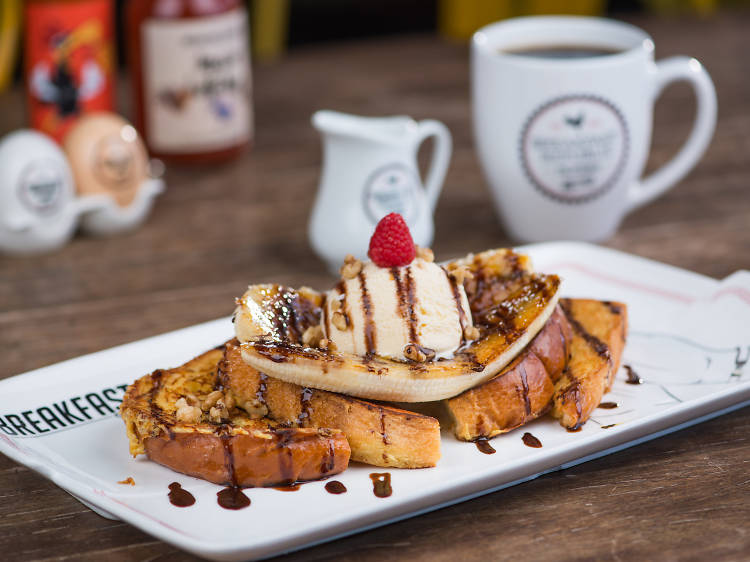 This cheery breakfast spot perks up mornings with friendly service and over-the-top grub. The inclusive menu has something for everyone, from the healthy to the hungover. A full bar sends out bacon Bloody Marys and draft kombuchas, while the kitchen serves breakfast burgers and vibrant veggie scrambles. The dessert-for-breakfast crowd can indulge in banana split French toast, churro pancakes and the Mr. Presley, French toast with peanut butter, bananas foster and bacon. You’ll find locations throughout town, but the Ocean Beach locale–with its kitchen housed in a vintage Airstream–is a fave.

Not simply a bar and restaurant, Carnitas’ Snack Shack is a great hang-out along the waterfront with three very convincing reasons to visit: 1) chunky pork sandwiches 2) craft beer and 3) carnitas tacos. Grab your choice snacks to-go from the shack window, or pull up a chair outside this laidback venue. 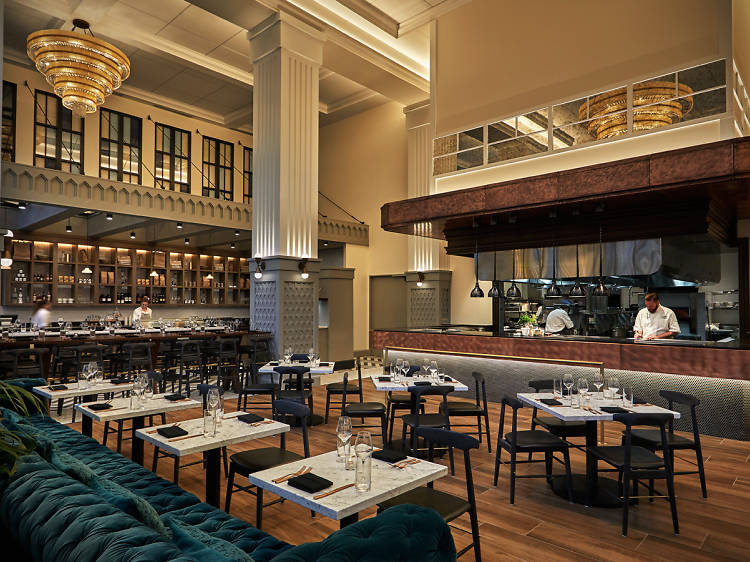 Situated within The Pendry hotel downtown (home to some of the best bars in San Diego), this bright and airy restaurant combines big, bold decor with big, bold dishes. Pick up a thin-crust wood-fired pizza like the Italians make 'em, or try a house-made pasta dish like the pappardelle bolognese.