Seoul Forest’s not just for your walking shoes anymore. Once a neighborhood for a day stroll in sneakers and fanny packs the Ttukseom area in, Seongsu-dong is giving rise to a new demographic of young and fashionable Seoulites.
While mostly popular for its parks (Seoul Forest and Ttukseom), the area has also been known for the beloved Galbi Street and Handmade Shoes Town for years. Rumors of celebrities moving into the high rise apartments in the neighborhood have made it hot in terms of real estate prices but it’s mostly stayed quiet and residential until now.

Thanks in large part to the non-profit organization Root Impact and their “Seoul Forest Project,” small enterprises have been protected and local businesses upported. And in keeping with the project’s concept, many social ventures have popped up in the vicinity.Filling these spaces is a myriad of young people squeezing their way through low-rise buildings, rugged residences and apartments. Entrepreneurs, innovators and fashion designers, too, are making their way here. Especially for those in fashion, you might ask—why leave fashion meccas Apgujeong and Sinsa? Why Seongsu-dong? Everyone’s got a story and theirs bring this neighborhood to life. 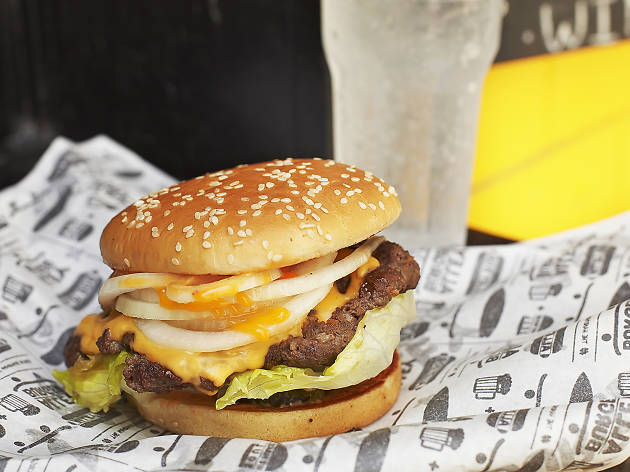 The first you notice about this handmade burger joint is the bright yellow sign that stands out amongst all the rib restaurants on Galbi Street. When asked how the place came to be, owner Lee Yong-ho simply states, “Because the thing I eat the most is burgers.” An ex-member of the national snowboarding team, he acquired a taste for burgers while traveling to Canada and the U.S. for training. The secret to Alley Burger’s success is their integrity—they create all of their own patties and sauces, which is a steal at 5,000 won (or less). Feeling adventurous? Try his mother’s special bulgogi sauce on your burger for a more Koreanized taste. 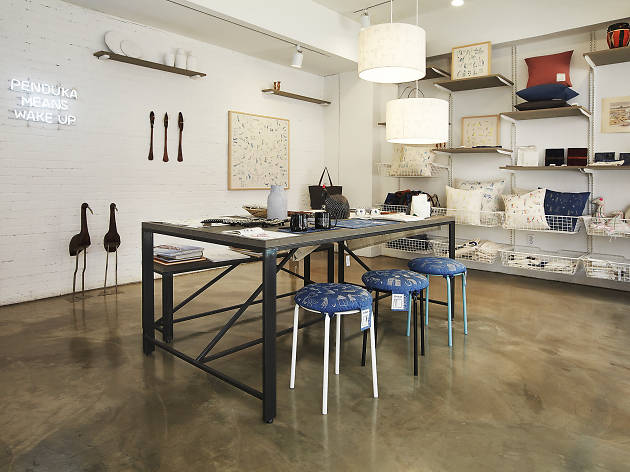 Prints on the fabrics available at this store include one of a woman collecting water and another of silhouettes of African trees and animals. While there is something vaguely familiar about them, they come from quite a distant place—Namibia. Selling handsewn goods by women from this African country, the company’s name and slogan is penduka (meaning “wake up” in Oshiwambo). Penduka is a fair trade brand that started exporting last year. Nambian women get to stand on their own throughthese product designs and this is the only enduka showroom in all of Korea. Even for those that don’t know the philanthropic back-story, the items here are swoon-worthy. Pick up items such as pouches, eco bags and more to make the trip to Penduka all the more valuable. 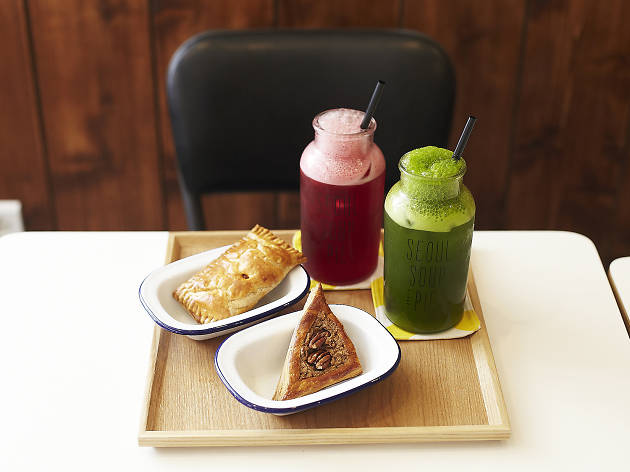 Seoul Soup Pie can be understood as either “Seoul Forest Pie,” or “Seoul Soup and Pie” (both phonetically the same in Korean), because as the name suggests, place sells both soups and pies. Look for the owner’s personal touch in everything from the pretty vintage European-style tiles to the tiny but tidy kitchen. The neat trays and utensils give you a feel-good vibe even before you dig into the tasty fare. Their menu includes creamy chicken soup, tomato bacon soup, tomato meat pie, pecan pies, kale juice and beet juice. It’s the perfect light meal for your summer. 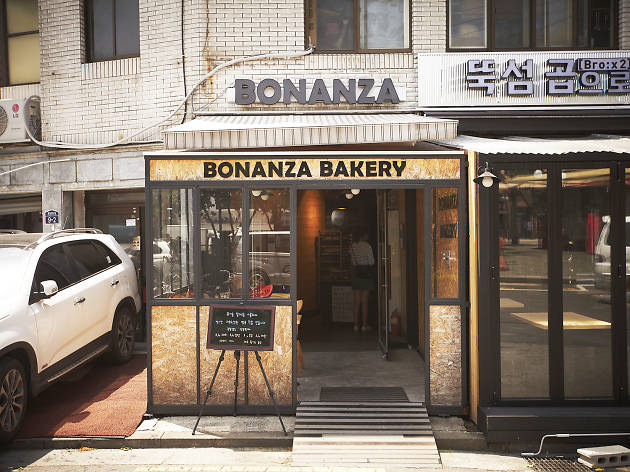 He thought he was taking simple baking classes to impress his bread-loving girlfriend. He didn’t realize that he had signed up for a certification course and ended up becoming a professional baker. Thankfully for him, they got married and opened up a bakery—Bonanza Bakery. This bakery only sells eight kinds of bread, none of which contain butter, sugar, milk or eggs. What they lack in variety, the place makes up for in no-nonsense methods and simple tastes. Fresh bread is served three times daily at noon, 2pm and 5pm, but these sell like hot cakes, so be sure to arrive on time. For the organic offerings in cranberry walnut, jalapeño cheese, fig walnut at 3,000-5,000won, it’s definitely  bargain. One of the best sellers, “I’m Choco,” is a chocolate bread appealing to both those with and without a sweet tooth. 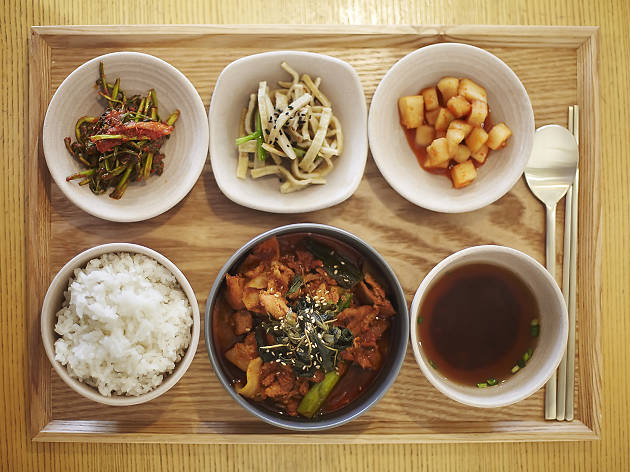 Seasoned wild vegetable rice, Wolsan mulberry leaves, Hwageok gooseberry sprouts, Ilpo Aster scaber leaves and Grandma Bang Wisun’s soy sauce. No, they’re not names from a natural science documentary, they’re items featured on the menu board of this restaurant. Young Ms. Kim, who runs this restaurant, decided to make good of the excess produce many elderly women in the Gangwon province were selling. She combined the freshness of these ingredients with her mother’s recipes to produce dishes such as seasoned wild vegetable rice, whole pollack roe bibimbap and soy bean paste soup. Koreans eat here when they miss mom’s home cooking, so come to see what authentic everyday meals are like. 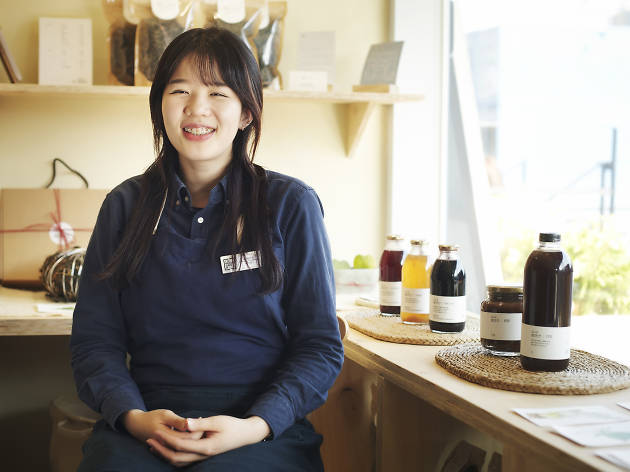 Who are you?
I am Kim Min-young and I have been running Sobang Life since last year. I recently opened a second store at
Common Ground in Jayang-dong as well. In Korean, the restaurant’s name is “Sonyeo Bangatgan.”

What does that mean?
At a bangatgan (Korean for mill), they sell whole sesame seeds, and sesame oil made from those seeds. So I added the name “bangatgan” to say that I sell ingredients and the food made from it. “Sonyeo” (Korean for girl) is to say I will make the food with the mindset of a young girl. It’s a bit embarrassing at times when customers come to look for the young girl. (Laughs)

What made you want to open up shop near Seoul Forest?
I was able to set up shop because of last November’s Seoul Forest Project. The location wasn’t great, but it didn’t matter because the purpose was to carry out
our objective, rather than commercial success. So when I started getting interview requests early this year, I was bit surprised. On the other hand, I’m also
worried that this neighborhood might become just a fad that comes under the spotlight for commercial reasons.

Where did you find the inspiration for the store?
It all began when I saw great produce at the homes of elderly women who live up in the mountains. There is so much of it so it’s just left there to rot. I started contemplating about how I could effectively provide these produce to consumers. I knew if they tried
it, they would like it, and they would even come back.

What is the appeal of Ttukseom or Seoul Forest?
The first impression of Seoul Forest, and even now, is that it is secluded. I was born and raised in Seoul but for some reason this part of the city isn’t like the Seoul
I know. When you live in the city, you are inadvertently exposed to noise. Not in this neighborhood. And after moving here, I can feel how much the residents here
care about the neighborhood. Maybe they want to protect it, but there is a feeling of exuberance as opposed to emptiness in all this open air.

What more would you like to do in the future?
Since we have a young consumer base, I do want to expand and grow, but more than anything else, I want to operate this business well so I can continue to help the grandmas out.