Switzerland hasn't been engaged in a military conflict for over 150 years, but hidden beneath the country's surface is a vast network of military bunkers and fallout shelters that exist to protect the Swiss people from potential onset of war and nuclear devastation. Many of these were built during the Cold War, when the threat of nuclear bombs seemed very real indeed.

Although the exact number of military bunkers isn't known, a common estimate is that there are around 20,000 bunkers dotted around Switzerland. There are also more than 300,000 private and public fallout shelters around the country.

All of which means that Switzerland would appear to have some potential protection for its citizens if nuclear conflict did occur, although it's not known just how effective these shelters – some built many decades ago – would be against modern-day threats.

But that doesn't stop us from taking a look into some of these mysterious spaces, thanks to a photographer calling himself Kecko, who's chronicled some of the most interesting bunkers and shelters in Switzerland. Here are a few of our favourites. 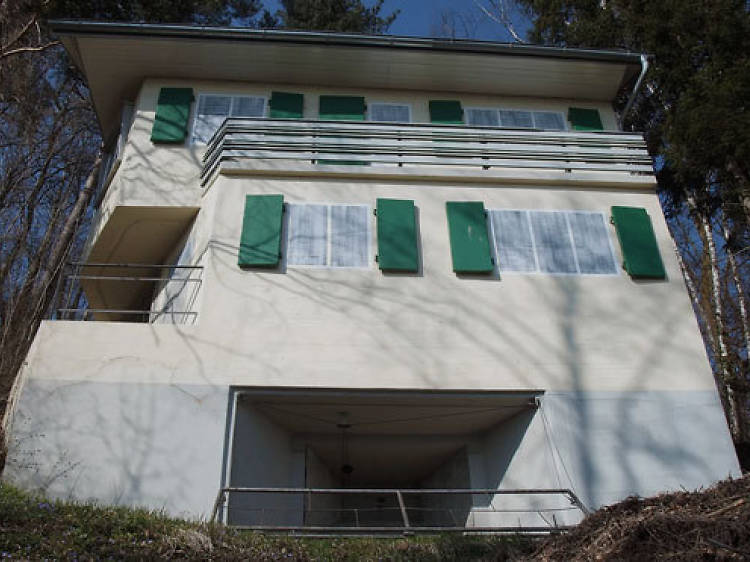 1. You think this is a house in the woods?

Think again. This is a military bunker camouflaged as a civilian house (yes, the windows are painted on). The bottom alcove is a machine gun turret, ready to mow down unsuspecting enemies. 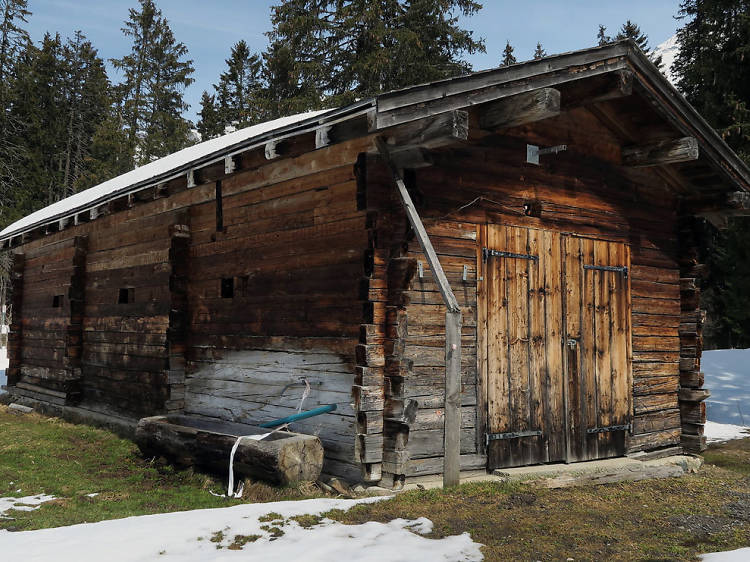 Nope, this is actually part of the underground military installation that was built in the mid-70s. 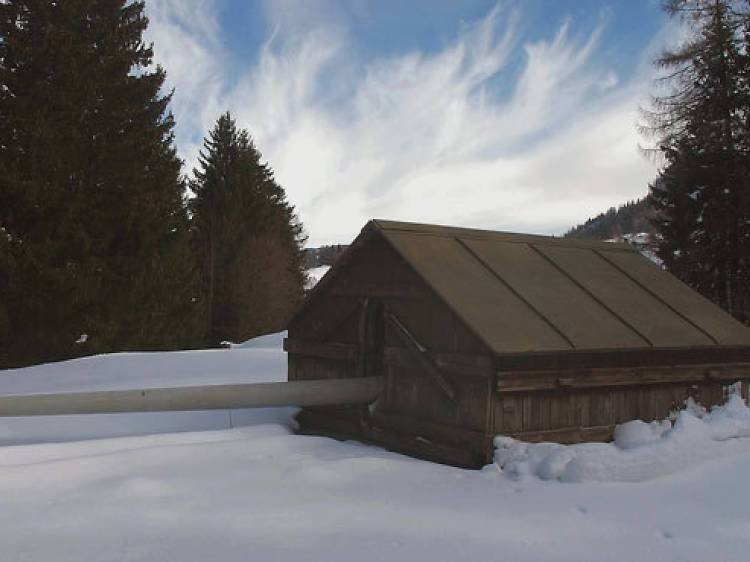 It shouldn't, as that protruding cylinder is actually the barrel of a 10.5cm calibre cannon. Behind the rickety wooden shell is an armoured dome of steel, where the gunners would sit. In more secretive days, the barrel would be camouflaged. 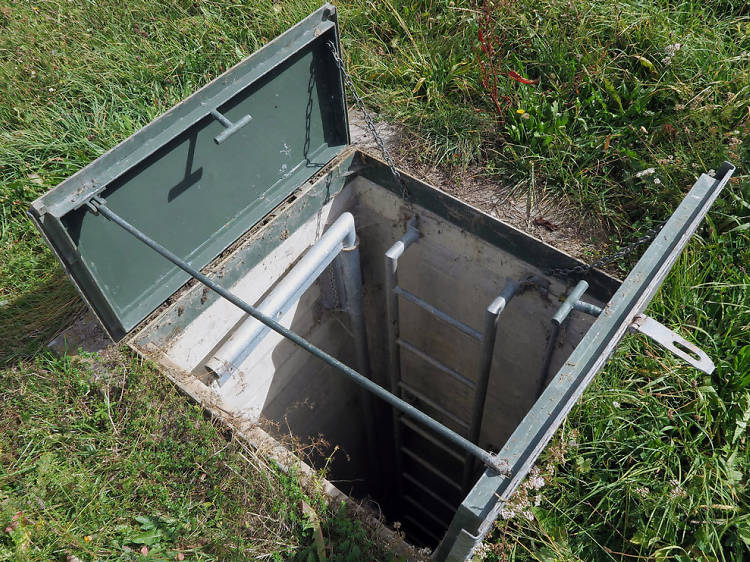 Switzerland's fear of nuclear war has lead the country to create hundreds of thousands of underground fallout shelters, with some located in the most open of spaces. This particular hatch, camouflaged to blend in with the field, is a military shelter. 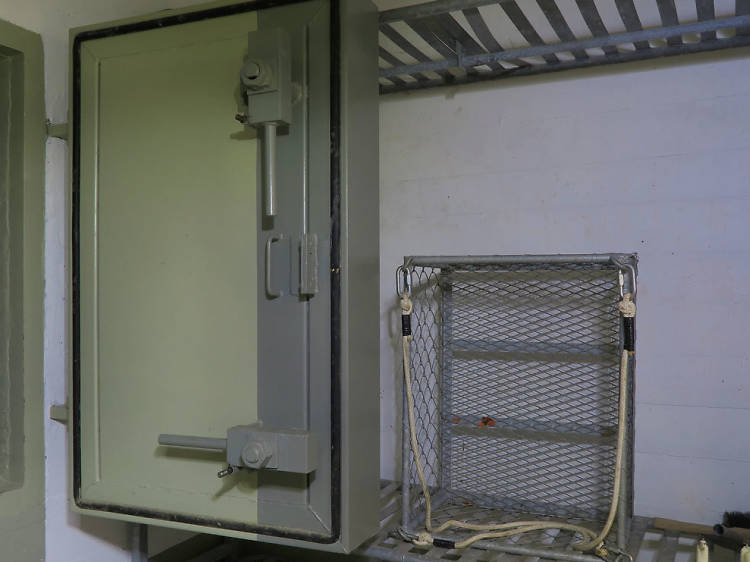 Inside the military shelters are rows of bunk beds and candles, needed to check how well ventilated the room is to avoid suffication. To keep out any pesky radiation, the rooms are protected by a pair of armoured gas-lock doors. 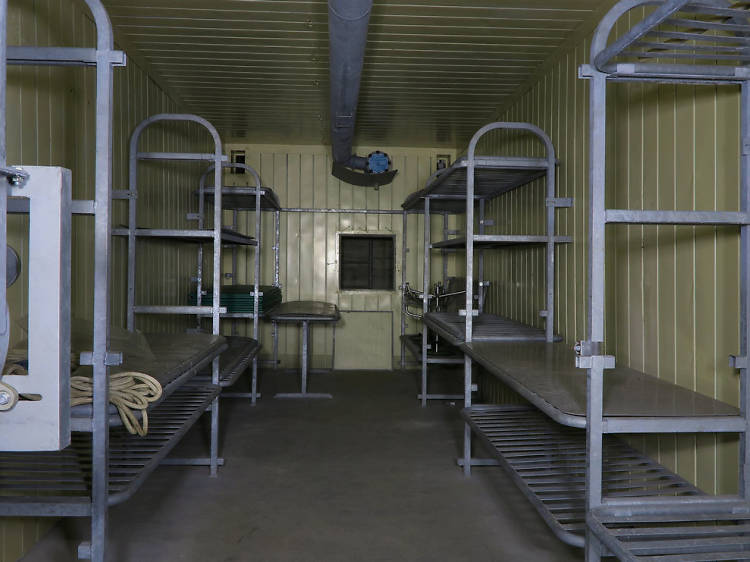 Although you would be safe from the dangers of the nuclear war, the prospect of living in such a bleak and cramped condition for many years was still daunting for many people. 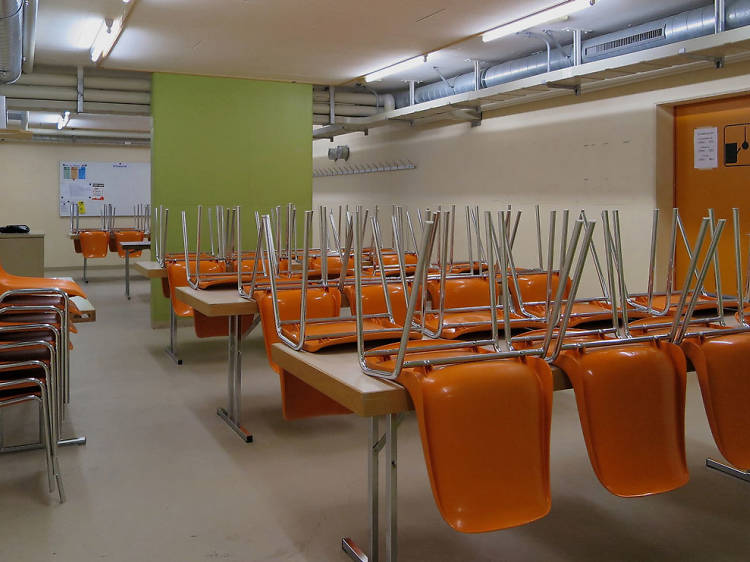 It's a different set up for civilian shelters, as nearly 400 people were expected to live in these underground communities should the worst happen. Built in 1983, this lounge and dining room area would have to feed the survivors for many years. 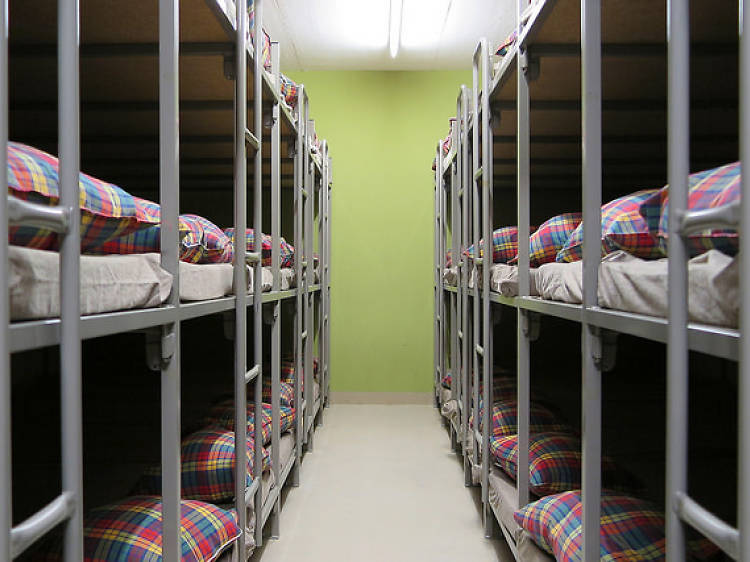 The dormitories for civilians do look a bit more inviting than the military's sleeping quarters.

Switzerland's obsession with fallout shelters stems from the cold war and the looming threat of nuclear war. After the Cuban missile crisis, the country passed the first laws for the creation of fallout shelters in 1963. 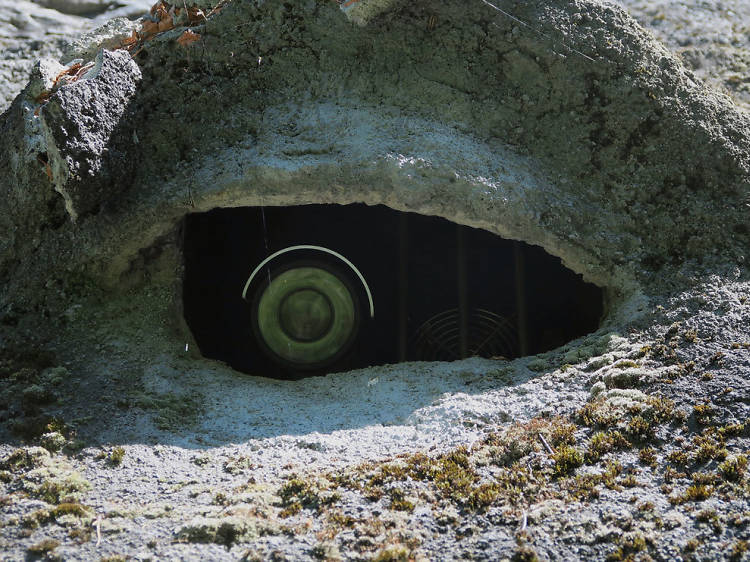 9. Eye of the mountain

Yup, this is a surveillance camera styled into an eye that's above a military bunker entrance inside a mountain. 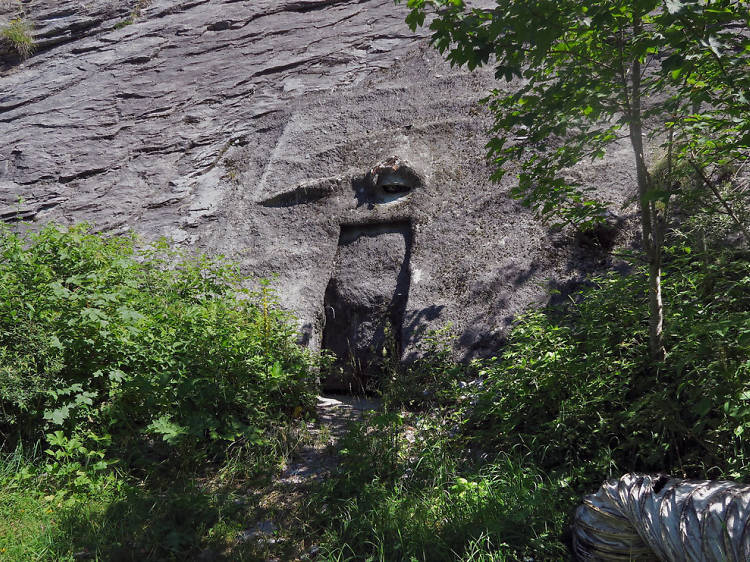 Camouflaged to blend in with its rocky setting, this is the door that leads to this secret bunker complex. 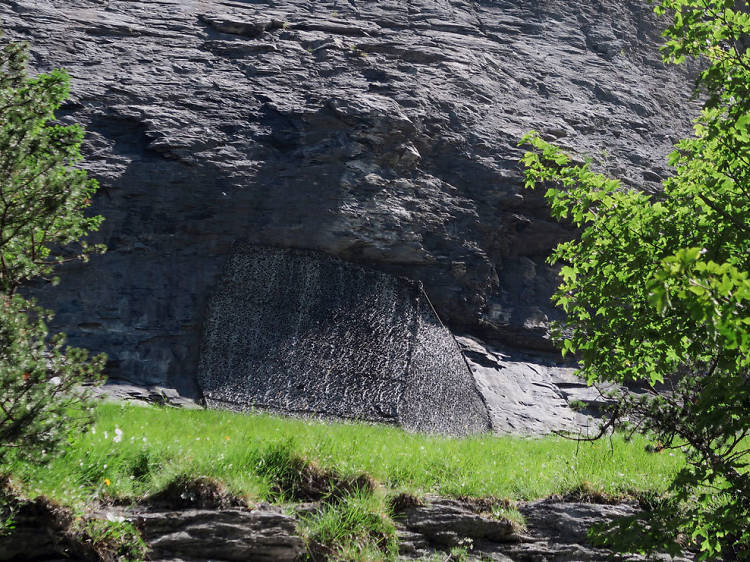 This may look like a giant "Thunderbirds" type camouflaged doorway, but this is actually part of the bunker's ventilation system.

Although the size and extent of this bunker facility has not been revealed, many bunker tours still pass through here to marvel at Switzerland's feats of engineering and ingenuity. 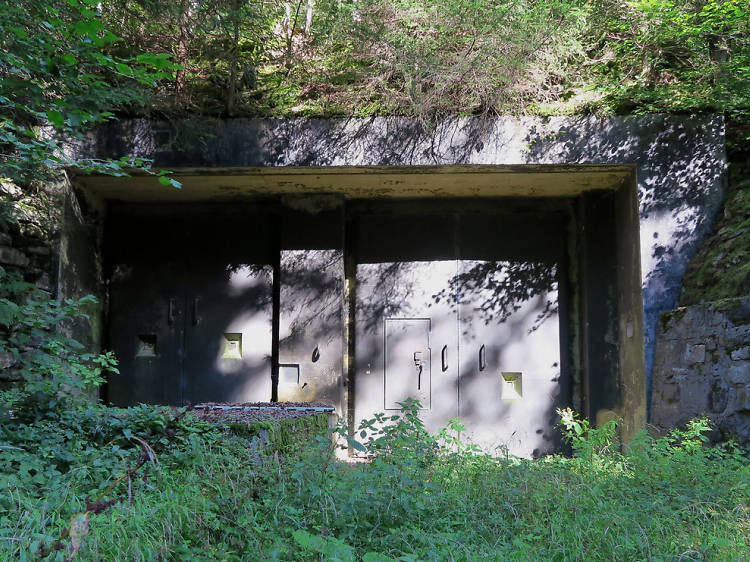 Surrounded with overgrown vegetation, this bunker is one of many that has been decomissioned by Switzerland after the Cold War ended. 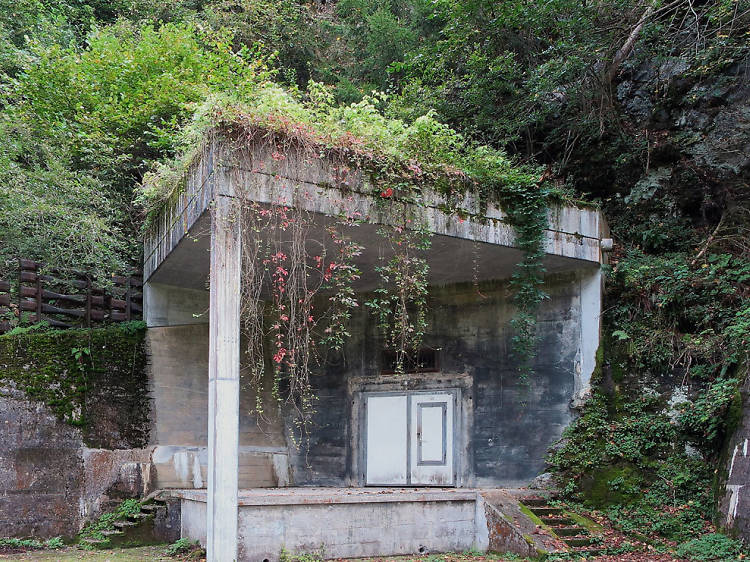 Sometimes the Swiss Army doesn't need to play hide and seek, so they use facilities like this. Although this bunker remains classified, it's perhaps best to assume that many of Switzerland's mountains have been hallowed out. 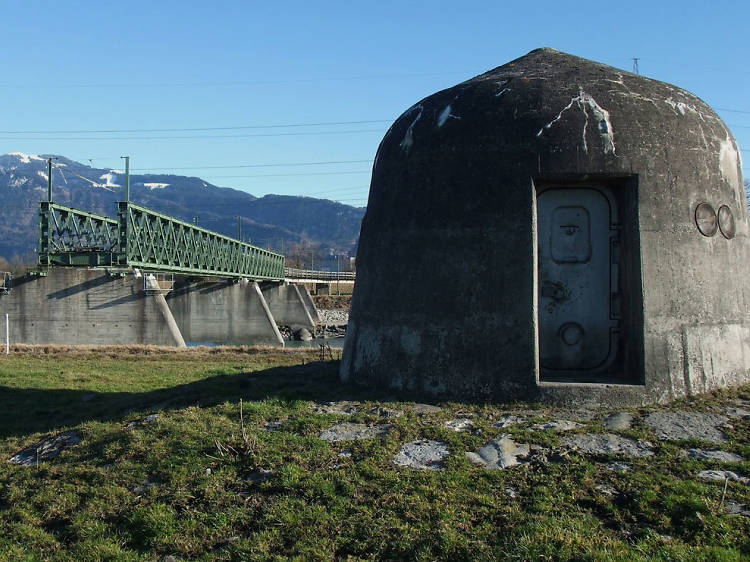 14. This one isn't even trying to hide

This WWII mini-bunker may look old, but there's a good chance that it could still probably save people if a third world war was to break out. Built in 1937, these dome-shaped bunkers were constructed along the Rhine frontier to protect the Rhine crossings. 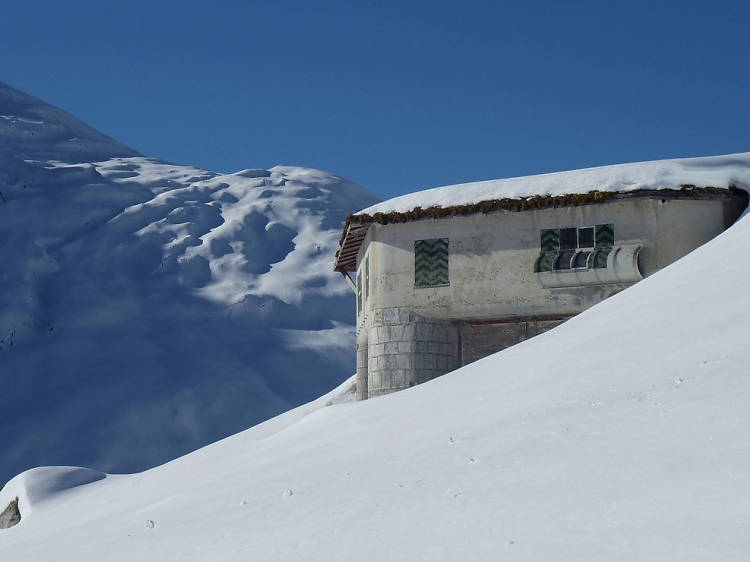 From deep below the mountain's belly to its highest summits, the Swiss are able to built fortifications at any altitude. This structure is an a decommissioned artillery bunker at fort Fuchsegg. 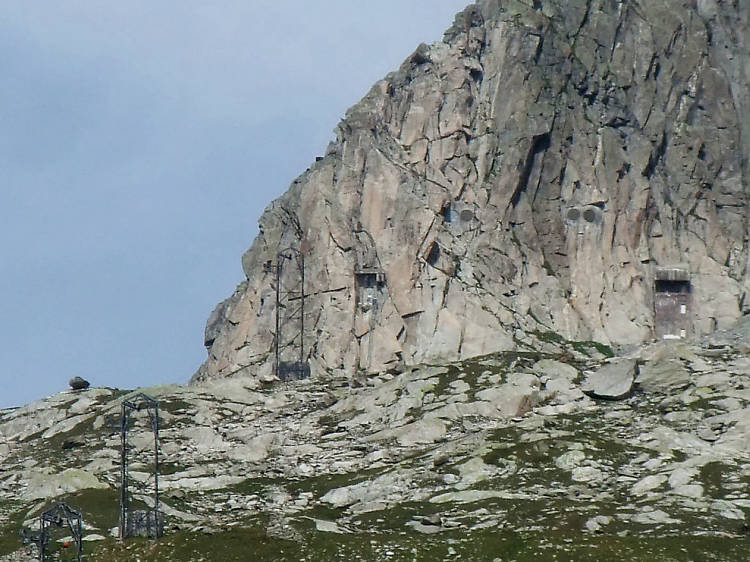 Perhaps Switzerland's greatest strength doesn't come from having a huge army or arms, but the psychological effect on any potential invaders to doubt every rock, cave or mountain top as positions for Swiss military.

This entire mountain top is under the control of the Swiss army as a secret bunker complex, serviceable by cable cars.

Want to see more? Check out these bunker tours 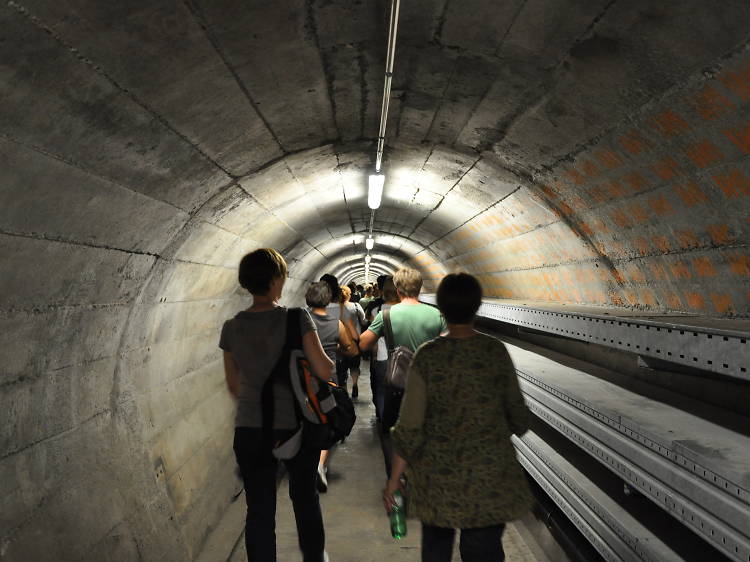 This giant bunker was built between 1970 and 1976 at a cost of 40 million Swiss francs. If it ever had been needed, two motorway tunnels would have been sealed by four 350-ton gates, with room enough for 20,000 beds and hundreds of toilet cabins - in fact one third of the population of Lucerne would have found shelter here inside Mount Sonnenberg. 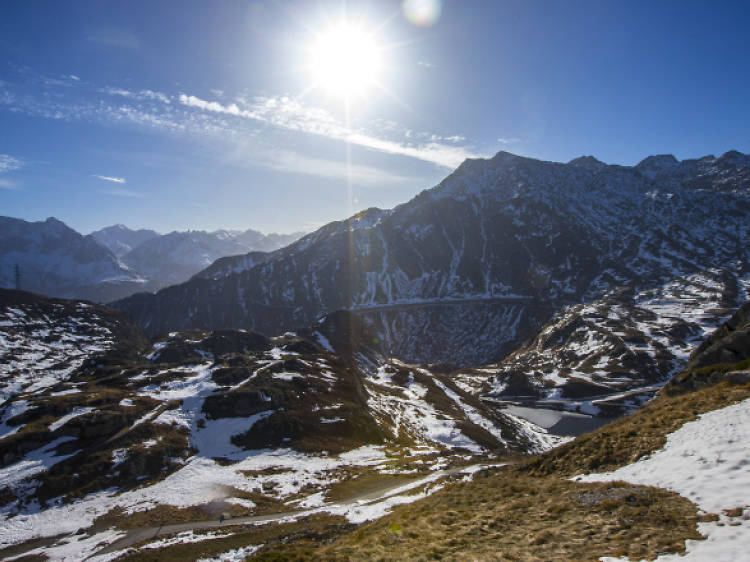 This strategic fort deep within the Gotthard massif was built to be completely hidden from view. Now the once secret stronghold is open to the public as a museum which provides a close look at its historical past. 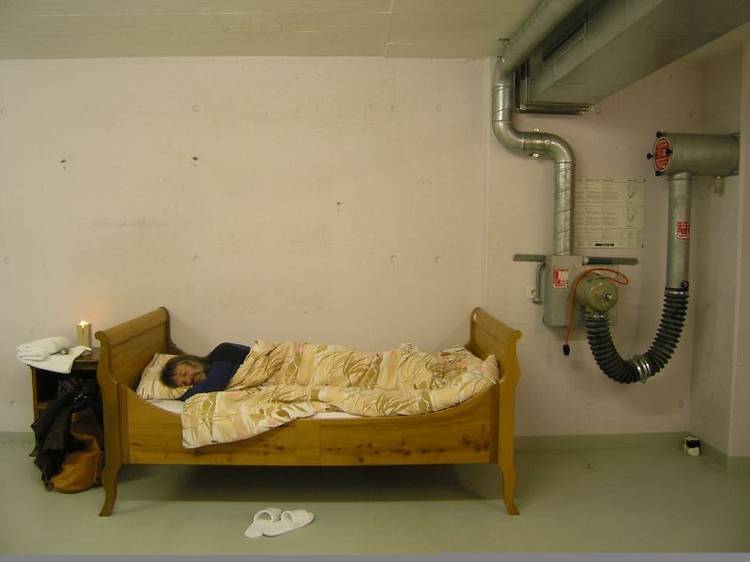 The Null Stern Hotel's mission statement should tell you everything you need to know about this hotel-turned-museum: "where the only star is you". 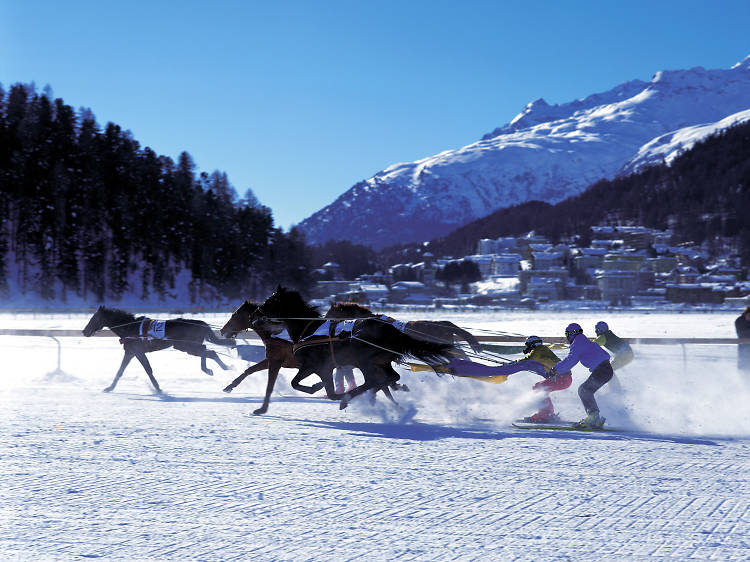 50 wonderful things to do this winter in Switzerland

Here's our guide to some of the coolest things to do and places to be this winter in Switzerland. 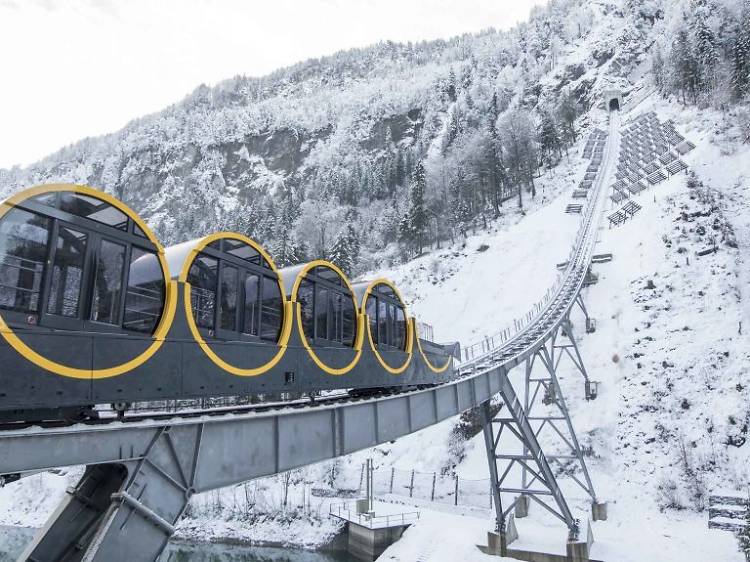 The world's steepest funicular railway' is located in the Alpine resort of Stoos. 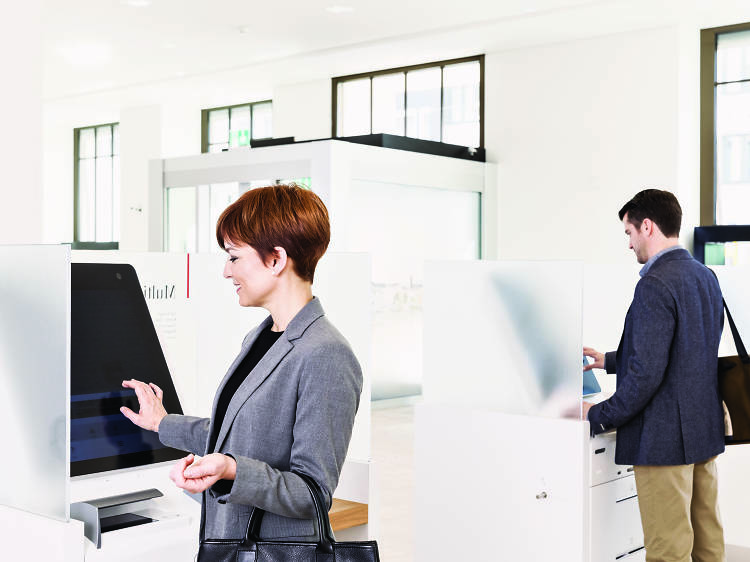 How to pay and save in Switzerland