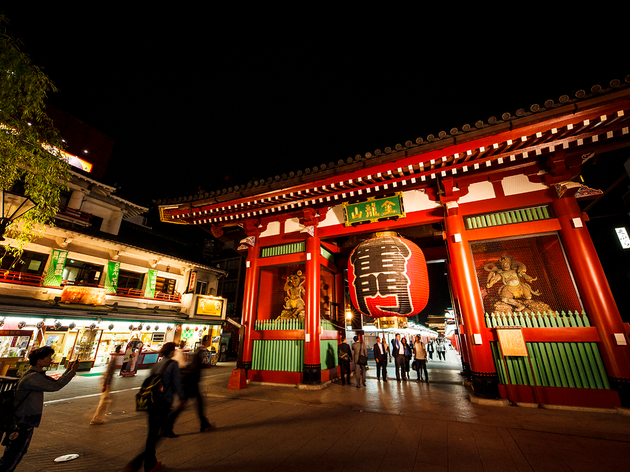 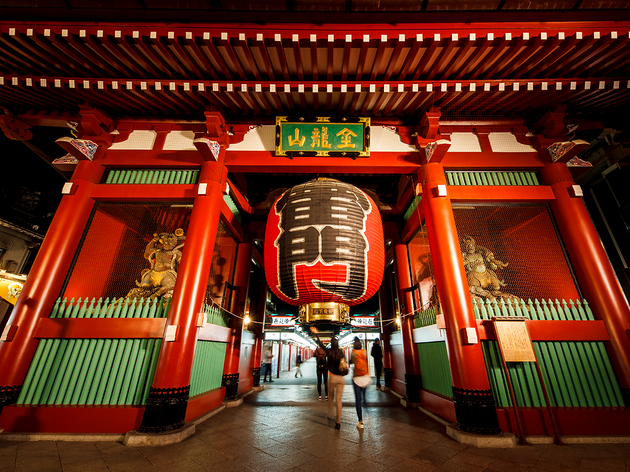 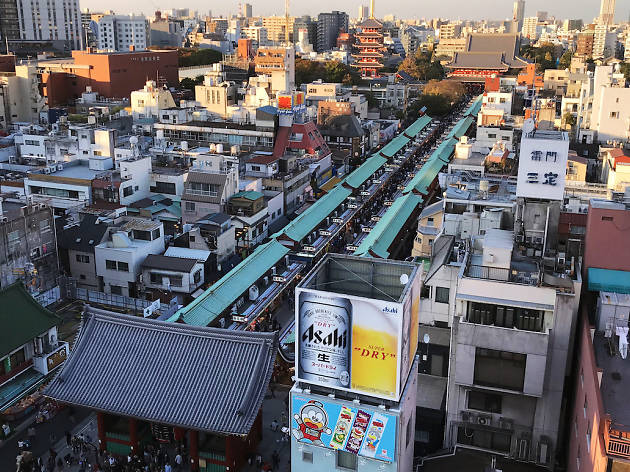 Everything you need to know about visiting Sensoji Temple and Kaminarimon Gate (2-3-1 Asakusa, Taito, Tokyo).

Kaminarimon Gate, the colossal vermillion entrance to Sensoji Temple, metropolitan Tokyo’s oldest and most popular temple, is quintessential old-school Tokyo. The gate, with its 700 kilogramme lantern, welcomes over 30 million visitors a year. Sensoji Temple, also known as Asakusa Kannon, is dedicated to Kannon, the bodhisattva of compassion. The principal statue of Kannon enshrined in the temple has apparently been saving souls for 1,400 years ever since  – as legend has it – fishermen discovered the statue in the nearby Sumida River.

Apart from the Nitenmon gate and the Denboin residence, most of the temple was destroyed during Allied bombing raids in 1945, and the main temple building and five-storied pagoda were rebuilt after the war. Kaminarimon Gate was restored in 1960 through a donation from Konosuke Matsushita, Panasonic’s founder.

If you fancy a snack heading to or from the temple, shops lining the Nakamise approach sell popular local specialities. Sweet crispy rice Kaminari okoshi, age-manju (rice cakes with a red bean filling) and ningyo-yaki (cakes moulded into special shapes, also commonly filled with red bean) aren’t the only things worth spending  your hard-earned yen on – don’t forget to look at the many traditional trinkets and souvenirs on offer. For lunch, dinner or an afternoon snack, stop by one of the many old-fashioned and traditional restaurants and cafés in Asakusa, some of which have been open for decades. Try oden at Otafuku, which dates back to the Meiji era, or Japanese fruit sandos at the 70-year-old Café Tsumuguri inside a refurbished traditional home.

Of course, you can queue up to see the temple up close, but one of the best views is from the free observation deck of the Asakusa Culture and Tourist Information Center across the street. While the shops on the way to the temple close around 5pm, the temple technically has no closing time. Seeing the pagoda and temple buildings lit up at night with  the illuminated Tokyo Skytree in the background is a view of eastern Tokyo you don’t want to miss.