As Japanese architecture has traditionally envisioned buildings as temporary and expendable, in part due to the constant threat of fires and earthquakes, Tokyo has been left with fewer examples of historic architecture than places like Europe and the UK. Nevertheless, the neighbouring districts of Marunouchi and Ginza still contain a number of buildings that have, through a combination of luck and love, managed to stay standing, providing an ideal opportunity to enjoy a walk around town and see a blend of old and new architecture.

Our starting point today is Tokyo Station (1-9-1 Marunouchi, Chiyoda-ku), which suffered damage but survived the Great Kanto Earthquake of 1923 as well as bombings during World War II. Recently restored to its original 1914 splendour, the station building has a beautifully designed roof featuring twin domes, which boast spectacular ceilings. The roof was built with slate from Ogatsu, a city damaged by the 2011 Great East Japan Earthquake and Tsunami, and thus symbolises the hope for the area’s recovery.

Walking south from here, you will see the Tokyo International Forum (3-5-1 Marunouchi, Chiyoda-ku), easily recognisable by its huge, glass, boat-shaped atrium. This building, which was constructed during the bubble economy, cost more to build than both Tokyo Skytree and Shinjuku’s Tokyo Metropolitan Government Building.

Next, passing under the Yamanote line railway tracks and entering Ginza, you’ll spot a tall rectangular building with irregularly shaped windows that make it look a little like a big block of Swiss cheese. Mikimoto Ginza 2 (2-4-12 Ginza, Chuo-ku), designed by Toyo Ito, features a complex construction system that combines metal and concrete to enable the nine-storey structure to stand strong even without any internal support pillars or any visible surface seams.

The next structure to catch your eye will be the nearby flagship store of De Beers Ginza (2-5-11 Ginza, Chuo-ku). Its twisted frame gives it an almost Seussian appearance. Take a walk around the back to find the Okuno Building (1-9-8 Ginza, Chuo-ku). One of the oldest apartment buildings in the country, it was constructed in 1932 to house luxury apartments but, these days, its worn interior is home mostly to art galleries and studios. Be sure to take a ride in the manually operated elevator. 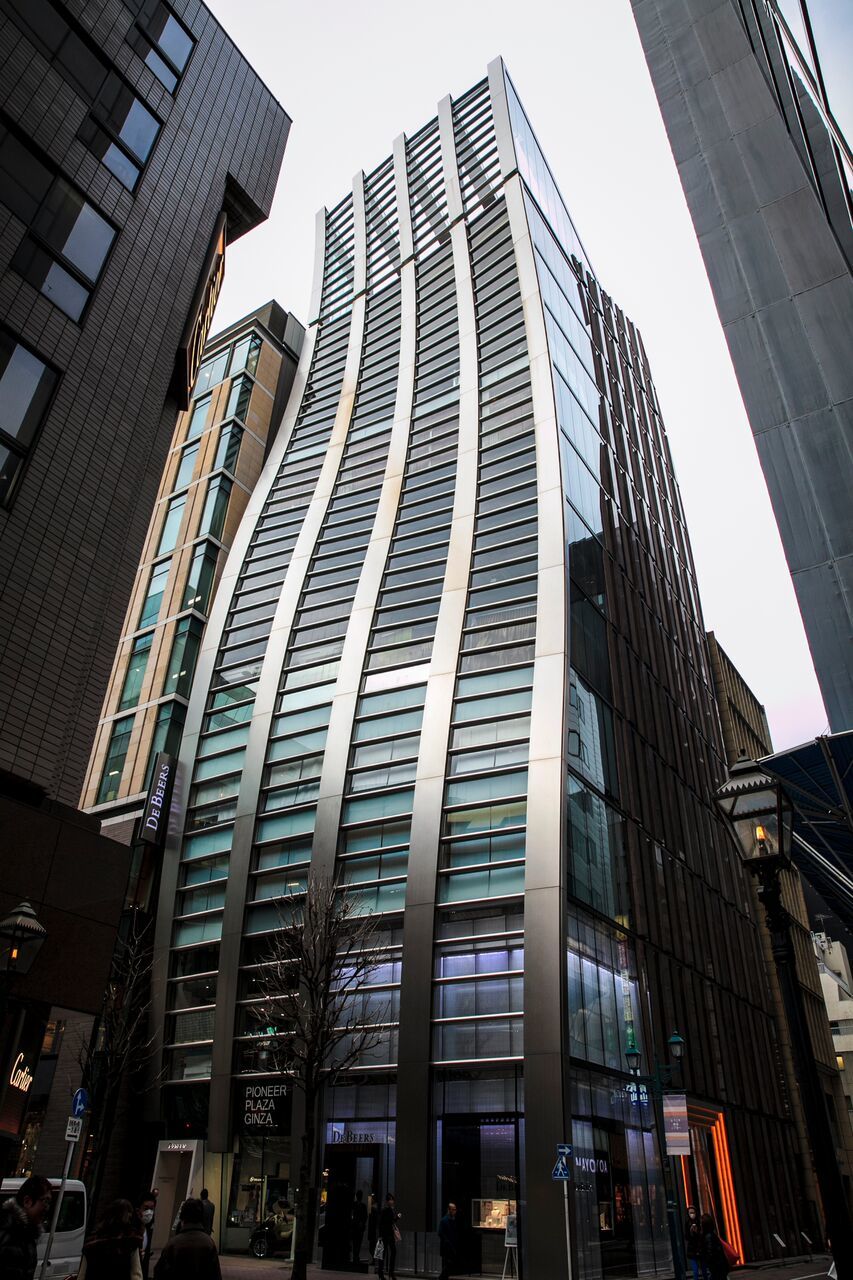 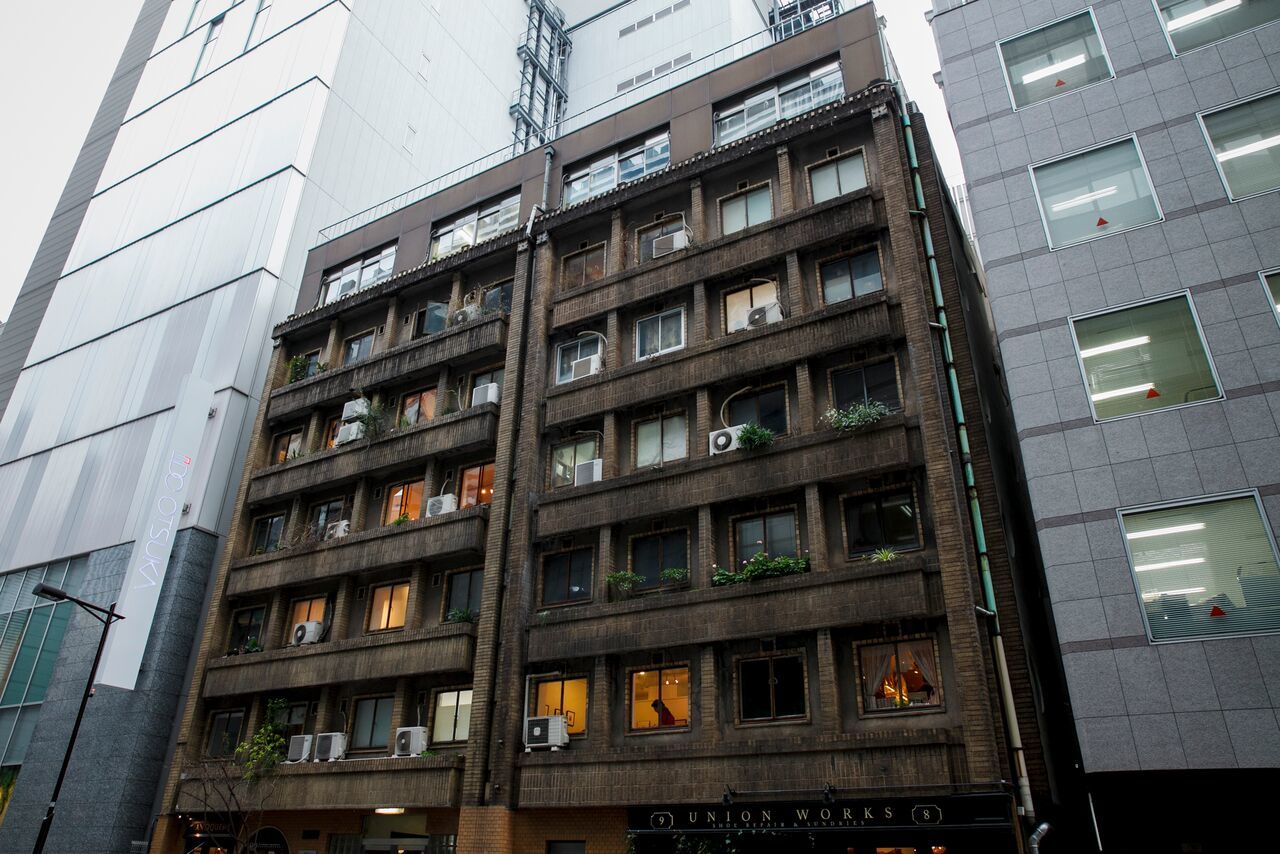 Returning to Chuo-dori, head for the Wako Building (4-5-11 Ginza, Chuo-ku) whose landmark clock tower is a famed symbol of Ginza. Cross the street and walk down Harumi-dori, where you’ll find the iconic Kabukiza Theatre (4-12-15 Ginza, Chuo-ku). Fires and airborne wartime attacks almost destroyed it, but it was rebuilt every time. The theatre’s post-war building, completed in 1950, was demolished in 2010 to make way for a new structure, which staged its first performances on April 2, 2013. The traditional yet futuristic design was conceived by Kengo Kuma, whose next big project will be Tokyo’s new National Stadium.

Next, take a look at the Nicolas G Hayek Center (7-9-18 Ginza, Chuo-ku) on Chuo-dori. The architect, Shigeru Ban, included novel design elements such as a vertical garden covering the walls of the atrium and glass elevators that double as showcases.

Continuing on to the Shuto Expressway, look out for Bordeaux (8-10-7 Ginza, Chuo-ku), Ginza’s longest running bar. The ivy-covered, Western-style building has remained unchanged since 1927. Take a quiet moment in this reserved space once frequented by the gentlemen of high society.

Our final stop is Nakagin Capsule Tower (8-4-6 Ginza, Chuo-ku), the epitome of Metabolist architecture. The exterior, with its rows of capsules on a steel frame shaft, evokes an atmosphere of ’70s and ’80s sci-fi, and is an unforgettable sight. There are ongoing discussions about rebuilding it because of its deterioration, but for now, there are rooms available on Airbnb should you want to feel like you’ve stepped inside Blade Runner for a night. And with that, I bid you goodnight.