They say change is the only constant in Tokyo, with the unstoppable force euphemistically known as ‘redevelopment’ relentless in its quest to conquer new city spaces for faceless glass-and-steel towers and virtually identical shopping malls. But hope is far from lost for Tokyoites with hopes for a less, well, high-flying approach to urban evolution: they have one influential agent of an alternative future in Kengo Kuma, the designer of Tokyo’s new Olympic stadium and an advocate of a greener, more human-sized and tradition-respecting city. We caught up with Kuma at his Aoyama office to hear the superstar architect’s thoughts on how he would like to see Tokyo evolve in the run-up to 2020 and beyond.

How do you feel about your Olympic stadium potentially becoming a symbol of Tokyo for decades to come?

More than the stadium itself, I see its integration with the surrounding greenery as something that could become symbolic – having the stadium at the centre of a network of greenery combining its immediate surrounds with Meiji Shrine and Shinjuku Gyoen parks.

What message would you like to get across with the stadium and its surrounds?

Traditionally speaking, Japanese architecture doesn’t aim to produce structures that stand out on their own. Instead, it emphasises relations, such as the one between the building and the nature around it. The stadium will make use of wood, have nature, trees, as an integral part of the whole, and is designed to not appear overwhelming when seen from ground level. I hope it will help promote these elements of Japanese architecture to a global audience once again.

Seen through the eyes of an architect, what are your thoughts on the future of Tokyo?

In an age of global competition among cities, I think Tokyo really should abandon the idea of competing with big buildings – we can’t win that way. Our strengths lie elsewhere; in greenery and people-friendly alleys. Not in tall and flashy towers.

Resident-friendly architecture, in other words?

Right – many cities around the world have similar alleyway cultures, such as the hutongs in China or the alleys in southeast Asia, but Tokyo’s homely, welcoming backstreets are unique and ought to be protected and promoted.

Any ongoing Tokyo projects you're excited about for 2017?

Part of the ongoing refurbishment of Mitsukoshi Nihonbashi will be completed in 2017. I love renovating old buildings and remember being so impressed by Mitsukoshi as a child…old department stores used to be so flamboyant, they had an aura all of their own. I’d be happy to see it restored it to its former glory.

So you're not too excited about new shopping malls...

New structures tend to look the same everywhere in the world. With globalisation, tastes are converging, the same brands and even the same restaurants are found in shopping complexes all over the world. This is obviously boring, so people with a deep interest in cities gravitate towards the old instead. In a sense, buildings like Mitsukoshi have a kind of power that no new replacements could have.

It’s about not doing away with tradition, but polishing it instead. When I worked on the Kabukiza, we did tear down the old building but kept most of the original materials, restored and re-used them. Some of those materials, such as the white marble blocks we worked with, aren’t even available [on the market] any longer.

How about projects set for completion by 2020?

Construction will start soon on the new [Yamanote line] station to be built between Shinagawa and Tamachi. This one will incorporate a significant amount of natural materials, and have a wooden roof framework with a large white sheet spread over it, so the entire station will be bathing in light – something that hasn’t been done before in Tokyo. It’s set to open before the Olympics and will hopefully impress visitors.

And what are you personally looking forward to in the year to come?

The start of [Olympic] stadium construction – I walk past the site every day on my way to the office, so I look forward to seeing the building emerge little by little. It’s my largest project so far, so I can’t wait to be able to sense its scale. 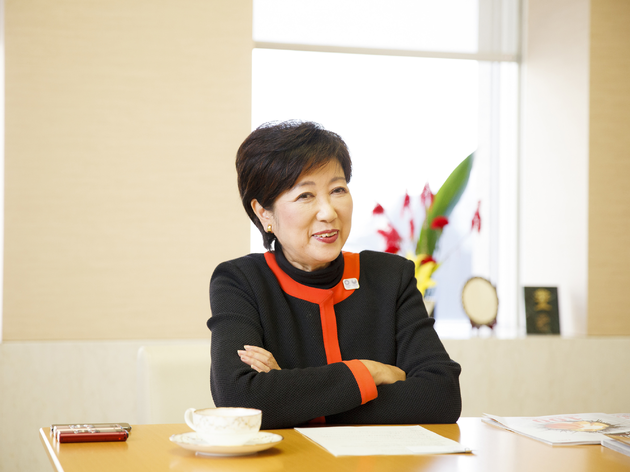