When I told Japanese friends of my idea to hitchhike to Hiroshima, my plan was met with shock, amusement and the question, ‘Can you do that?’ I wasn’t really sure, to be honest, but stories I’d heard had made it sound easy. And ever since I’d read ‘Hokkaido Highway Blues’, Will Ferguson’s captivating account of traversing the entire country from south to north in strangers’ cars, I’d wanted to experience it myself.

During the journey, I asked the same two questions to every driver who stopped for me: had they seen a hitchhiker in Japan before, and why had they picked me up. Answers to the first were mixed, but the second question evoked an almost unanimous response: ’Because you’re a guest in Japan. I want to be a good host.’ Seems omotenashi (Japanese hospitality) is alive and well, even on the roads… 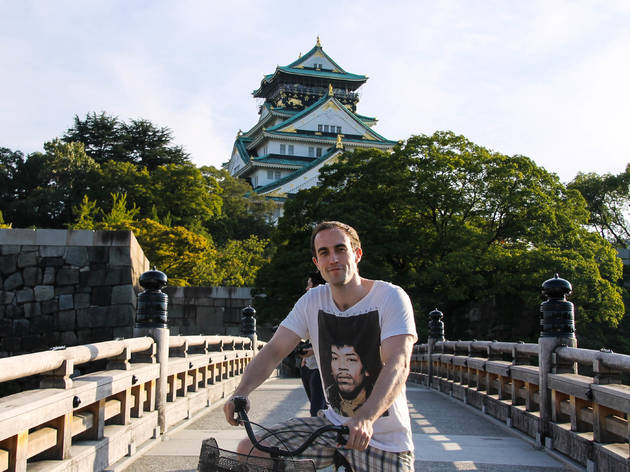 On the road to Osaka Castle

Kilometres hitched: 506, on the Tomei and Meishin expressways

Number of hours: ten (by comparison, it takes 155 to 175 minutes by shinkansen; nine to ten hours by local train)
Number of cars: six

My first ride was with an American named Yuki. I’d just arrived at a service area (SA) near Fujigaoka and gave him a friendly ‘konnichiwa’, when his New York-accented reply of ‘Hey man, how’s it going?’ surprised me almost as much as his offer of a lift. Could it really be this easy?

It was. After just five minutes at the next SA, Hiratsuka, a heavy-set man in a leather jacket hopped off his motor bike and beckoned me over. ‘Come with me,’ he said as he strode up to the nearest man and asked him to give me a lift. I presumed they must know each other, but when he approached another I realised he was conscripting complete strangers to my cause. The second guy said he’d give me a lift. ‘We’re going to Atami,’ his daughter told me once we were on the highway, ‘Gotemba’s kind of out of the way, but my dad wanted to help so we’ll take you there.’ 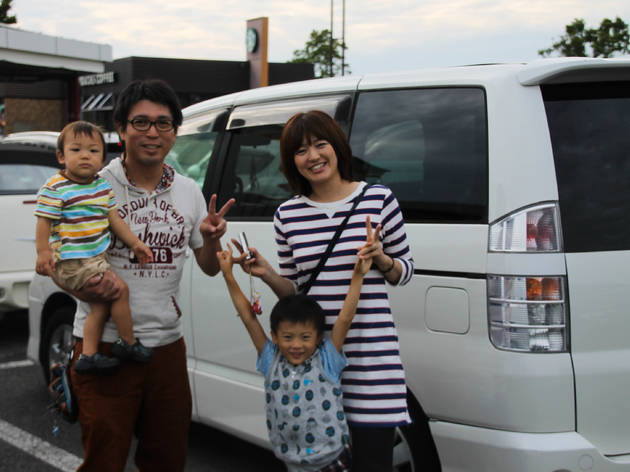 Once in Gotemba, it only took ten minutes for me to be picked up by Naoyo, a medical equipment salesman on his way to meet old friends. The next two rides were with young families: the first were moving house and made space by shifting boxes from the car into a truck following behind; the second were returning from a safari park and I squeezed in between two child seats.

By the sixth and final ride, I was no longer bothering to put my backpack down while I waited. I was soon picked up by Koto and Yoshi, on their way to compete in a dirt bike race in Hyogo. They’d already motioned for me to get in before thinking to ask where I was going, and when I gave the unspecific answer of ‘Kansai’ (which includes Osaka, Kobe and Kyoto), they declared they would take me to Kyoto, conferring with each other about all the things a foreign tourist would enjoy there. After some confusion I explained that, if it made no difference to them, I’d prefer Osaka.

‘We’ll take you to Osaka then!’
After we’d spoken for a while the two began to talk earnestly between themselves, confirming each detail we’d just discussed.
‘He’s 27.’ ‘Amazing! He hitchhiked from Tokyo today!’
‘Amazing, isn’t it? He’s from England!’
‘Amazing! He’s going to Osaka!’
‘Amazing...’

Eventually they exhausted all they’d learned about me, and I was tempted to feed the conversation with a few more tidbits but decided that was probably beneath someone as amazing as me. Instead, I got to the questions I’d asked everybody that day.
‘We stopped for you because you’re a good person,’ they answered.
‘But how did you know I was a good person?’
Koto looked thoughtful. ‘You have a kind face. And you’re travelling around Japan so you must be interested in our culture, you must be a good person, right?’

After a couple of hours we reached Osaka. While there, I learnt some Kansai-ben from drunken locals who were amused to hear their dialect in a foreign accent, and ate nothing but dishes ending in -yaki for three days.

Whenever you ask a Japanese person what they did while on holiday in Osaka, they’ll reply with a list of things they ate, and for good reason. Don’t miss the grandeur of Osaka Castle and the warped imitation of American culture at entertainment district Amerikamura (aka Ame-mura), but also make sure you try okonomiyaki (Japanese pancakes), takoyaki (octopus balls) and kushikatsu (deep-fried skewers).

Where to stay: Hostel 64 Osaka is in a good location and reasonably priced (from ¥3,900 per person for the Deluxe Dormitory), especially considering the ‘dorm’ consists of double beds separated by screens. 06 6556 6586. 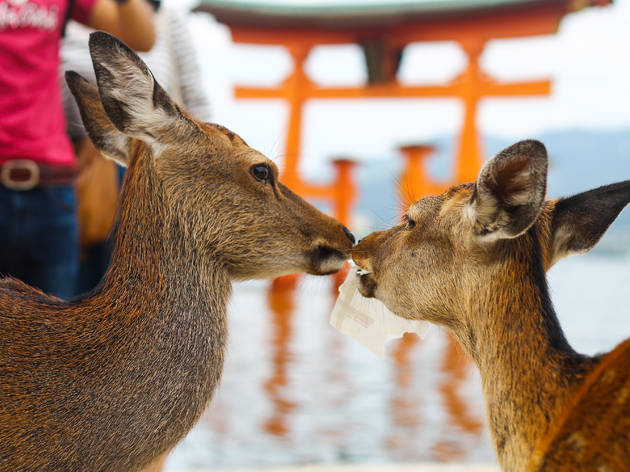 
Kilometres hitched: 301, on the Sanyo Expressway
Number of hours: five (by comparison, it takes 80 minutes by shinkansen; five to six hours by local train)
Number of cars: three

To access the Sanyo Expressway in nearby Kobe, I took a train to within walking distance of Zenkai Parking Area. The first person to pick me up was a truck driver, transporting meat, who took me along to prevent him from falling asleep. My next companion was either partially deaf or so excited to have a foreign hitchhiker in his car that he lost all volume control and spent two hours shouting happily into my ear.

As we parted ways he handed me his pack of mints. I don’t think he’d planned to but, struck with an urge to give me something, had chosen the only available item. We both looked down at the mints in surprise, him a little more than me, and I remembered that I had a souvenir gift of my own to give away — British mints packaged in a tin with a picture of a marching beefeater. We conducted our roadside international mint exchange and said goodbye.

The final ride of my journey was with Youichi, a young man on his way home from work, who insisted on driving me to a hostel because a typhoon was approaching. 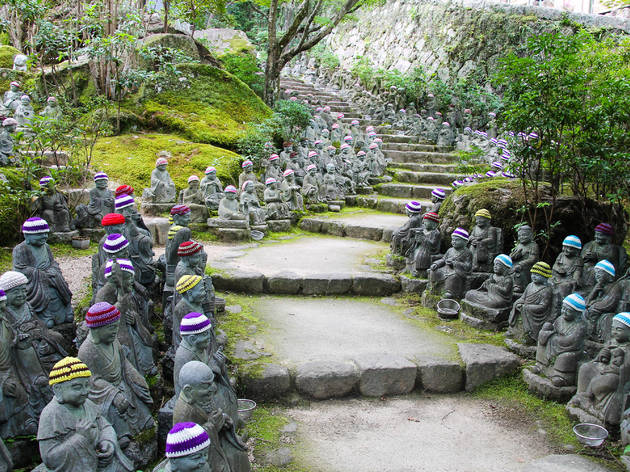 I spent four days in Hiroshima and on the last night I slept on the island of Miyajima, on the summit of Mt Misen. Once the final ropeway left at 5.30pm and I was alone, I unravelled my sleeping bag on the observation deck. The sun set, myriad lights twinkled across the sea from Hiroshima and above me in the night sky. I couldn’t make out the horizon, just a dark gap between the lights emanating from the ground and the sky, creating the illusion of a landscape curling up in the distance and enclosing me in a glittering dome.

The next day I took a night bus home, following the same 800km stretch of road I’d traversed purely by the kindness of strangers, though this time hot, uncomfortable and stealth-wrestling for arm space with the passenger beside me, guest rights no longer applicable. 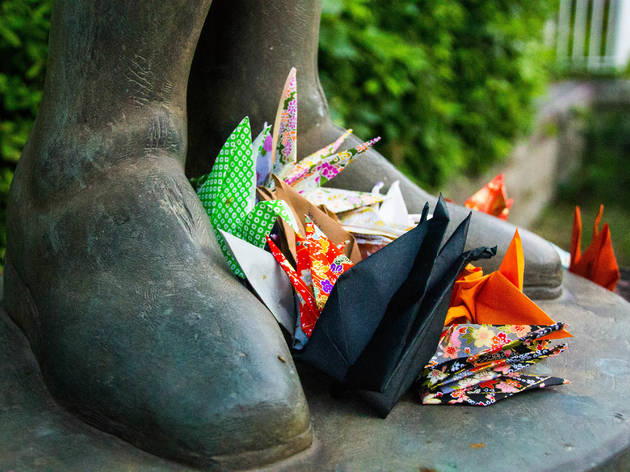 The Hiroshima Peace Memorial Museum is essential — no bitterness, no bias or propaganda, just remnants of an atrocity and a conclusion: this is what happened, it was horrific. Also visit the island of Miyajima to see Itsukushima Shrine and the best view of Hiroshima from atop Mt Misen.

Tips for hitchhiking in Japan 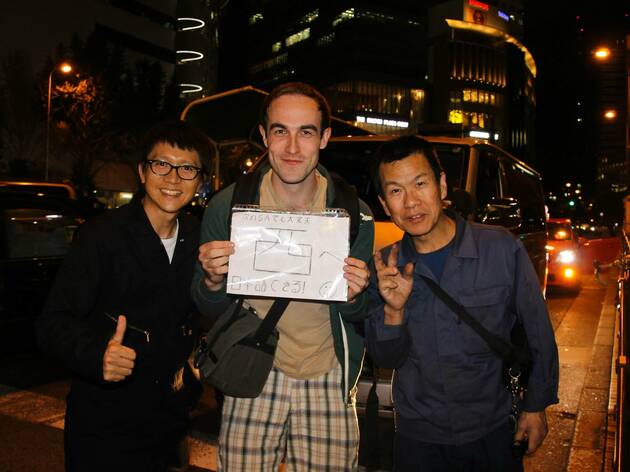 Cal holds a sign that says 'The next service station is OK, going west, I can speak Japanese'

Speak Japanese Obviously this one is a little difficult as it’s not something you can tick off your check list along with ‘spare batteries’, but it’s important. You don’t need to be fluent — I’m certainly not — but you should at least prepare a few phrases to put people at ease and let them know you don't have an axe in your bag.

Make a sign You need to let people know where you’re going, though preferably as a direction rather than a location (people won’t stop if they mistakenly believe they have to take you all the way to your final destination). Since this is Japan, the more kawaii (cute) you can make it, the higher your chance of getting picked up. Mine was an A4 sheet of maniacal biro scrawlings hastily put together the night before, but I did add an all-important smiley face.

Stick to service areas (SAs) and parking areas (PAs) Although there's no specific law against hitchhiking in Japan, it is illegal to stop the flow traffic. Stick to the SAs and PAs (as they’re denoted on Japanese maps) to avoid taking your next ride in a police car.