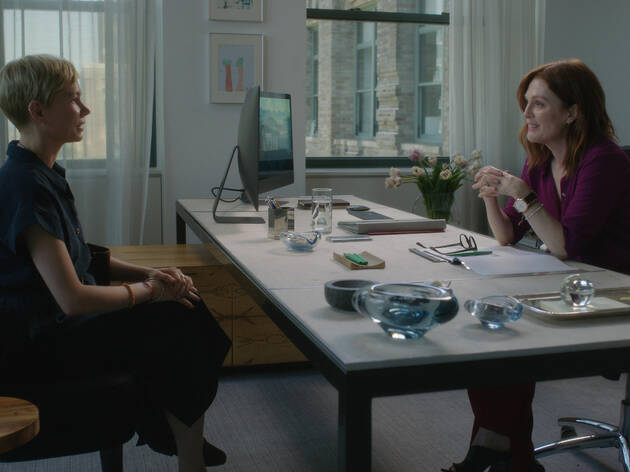 Family trauma comes to a lukewarm simmer in this well-cast but underpowered remake.

A chilly, frustrating Danish film becomes a chilly, frustrating American one, as Susanne Bier’s original 2006 version of After the Wedding gets a gender swap to no discernible improvement. Showy drone shots glide us into a movie that aspires to depth: In the first moment, Isabel (Michelle Williams, squirming behind her character’s serenity) can be seen meditating in India, where she leads a charity and feeds shoeless kids; in the second shot, self-made media exec Theresa (Julianne Moore, channeling hints of her brittle turns in Magnolia and Safe) cruises up to her palatial Long Island mansion shout-singing Lady Gaga.

Quickly, an economic disparity is established between them. But the film, overdirected by Bart Freundlich (also Moore’s husband), continues to place a near-obnoxious Nancy Meyers–like emphasis on wealthy, lacquered interiors. Yes, there’s a wedding, an elegant outdoor affair in which we see the menu cards, the his-and-her cocktail options, the seafood risotto. It’s also the occasion when Theresa and her handsome artist husband, Oscar (Billy Crudup), find themselves confronted by do-gooder Isabel, in town to receive a grant from Theresa and invited to the nuptials almost as an afterthought. One revealing toast from the bride, though, changes everything.

Nothing will be ruined in this review, but you’ll wish the burn in Williams’s eyes exploded into something a lot hotter. After the Wedding contains enough domestic revelations for several seasons of something delicious, but Freundlish’s showdowns all dissipate or get curtailed abruptly. Moore does vodka-swilling fury better than anyone, so why not unleash the beast? This isn’t simply a plea for more melodrama—though the script positively begs for it—but a sensible request: We’re waiting for this pressure cooker of a scenario to go nuclear and spill gunk all over the pretty, expensive stuff. It never happens, and for all the actors’ impeccable restraint (Crudup continues in the subtle vein he mined in Jackie and 20th Century Women), something is missing.