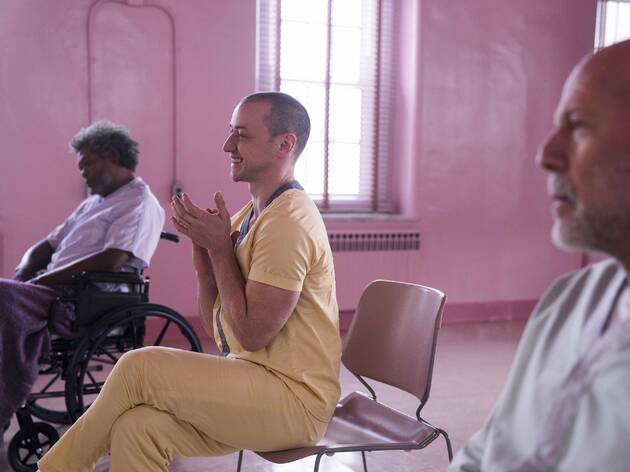 M. Night Shyamalan is back to heroes and villains in his deadeningly obvious latest film, for superfans only

Nobody likes a spoiler. And when it comes to the twist-laden movies of M Night Shyamalan, I would be dead in the water, unable to see the forest for the trees, if I even hinted at some of those big reveals. So consider this a warning – your only warning – about reading any reviews of ‘Glass’, the director’s new thriller. If you’re a Shyamalan fan, you should hold off on diving into this piece before you see it. Skip it afterwards, too, especially if you’re the kind of viewer who confuses single-stringed cello scraping for seriousness. Critics are only going to harsh your happy existence, a hermetically sealed theme park of your own devising.

‘Split’, a 2016 comeback of sorts for the filmmaker, was a reasonably tight serial-killer drama starring James McAvoy as a teen-abducting psychopath – that is, until its final seconds, when it unmasked itself as a stealth sequel to Shyamalan’s ‘Unbreakable’, a fine-tuned bit of crazy that posited superheroes were real and living in Philadelphia. ‘Glass’ is the follow-up to both movies, and the overindulged Shyamalan really wants to let us know how cool that is. The majority of his running time is dominated by dull, painfully verbal group-therapy sessions at a secret lab, where McAvoy’s captured cannibal, known as the Horde, sits alongside Bruce Willis’s somber avenging angel David Dunn (aka the Overseer) and Samuel L Jackson’s Mister Glass, a brittle-boned villain in a wheelchair who’s prone to speechifying when he’s not behaving catatonic.

It’s both stupefying and a little sad to realise that this is the movie Shyamalan wanted to make. ‘The Sixth Sense’, still his only great film, is also a therapy psychodrama, but whereas that ghost story reckoned with bedrock matters of loss and child abuse, ‘Glass’ assumes that we’re all going to lean in at dialogue about comic books, origin stories and limited editions. (Some people will.) The characters, we hear, are suffering from a ‘specific type of delusion of grandeur’, per an attending doctor (Sarah Paulson, too good for this material), one that makes them believe Marvel-esque heroes and villains truly exist. That obsession extends to the presumed audience, and we already know which side the writer-director is on. You wait for Paulson’s cynic to be hoisted on her own petard. (In ‘Glass’, women are either bad scientists, cheerleaders or, in Anya Taylor-Joy’s case, lucky sympathisers: Here, she’s called ‘the girl the Beast let go’, a major demotion from her role as ‘Split’s scrappy survivor.)

Shyamalan spends so much time on this are-they-or-aren’t-they-super question that he’s forgotten how to mount a persuasive escape sequence. There’s an ominous office tower being built downtown, but you’ll be shocked by how undisciplined his script is. It lacks a real climax, yet has room for multiple scenes set in comic-book stores, plus a lengthy and unnecessary cameo for himself. Does it end with a cute, unexpected jab to the ribs? You bet. That shiver of pure nothingness won’t be ruined here, but just to be perfectly clear: This review has no ulterior motive in disproving the secret lives of superheroes, only the talents of one formerly gifted filmmaker.