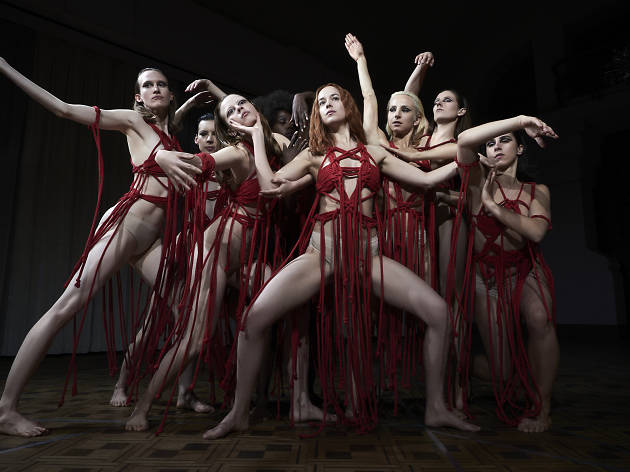 Rethought from the ground up, Luca Guadagnino's creative and creepy spin on the horror classic finds moves of its own.

The best horror movies, just as major as the more reputable stuff, work on a primal level, beyond plot or words. They grab at your bowels. Dario Argento’s 1977 stunner Suspiria, an explosion of color, gore and vaulting stylistic ambition, is undoubtedly one of them. To know (and to love) the film is to appreciate Italian cinema in a deeper way, for its eeriness and hysteria.

Still, it wasn’t quite a slam dunk when it was announced that a fellow Italian—even one as gifted as Call Me by Your Name’s Luca Guadagnino—would be re-imagining Suspiria, an obsession of his for decades. Guadagnino knows about getting good performances, and how to brew adult sexiness. But it’s a miracle that he seems to understand Argento’s witch-centric original on an almost molecular level—so much so that he can radically depart from it and still cast his own spell.

Scripted by David Kajganich (who also did Guagadnino’s A Bigger Splash, itself an adaptation of the 1969 French thriller La Piscine), today’s Suspiria is a spectacularly strange affair, thrumming with wild blood and weird powers. It’s easily the classiest horror movie made in years, maybe ever, decked out in muted pinks and green marble, and scored, gorgeously, by Radiohead’s Thom Yorke, whose arpeggiating piano lines, rumbling synths and cooing vocals create a Can–like propulsiveness. Traditional horror fans won’t be pleased: Almost transgressively, Guadagnino has deprioritized the shocks, even the fear. But in their place, he’s pumped up the exoticism and crafted a movie you can get lost in, which is the ultimate tribute.

It’s 1977 and we’re about to see something “set in a divided Berlin,” a title card tells us, though the movie’s Fassbinderian girl-on-girl psychodrama would have been another clue—that and the big honking Berlin Wall right outside the entrance to the famous dance academy. This is where Ohio-born Susie Bannion (Dakota Johnson, whose deep-red dye job is one of Suspiria’s only nods to Argento’s original palette) has long dreamed of studying. The school may be overrun by witches. Okay, fine, it is. But part of the witty re-invention of frequent Guadagnino collaborator Tilda Swinton is that her character, visionary instructor Madame Blanc, could pass for either a black-clad succubus or simply one of those self-serious 1970s artists who says things like, “Today we need to break the nose of every beautiful thing.”

And break it, they do, just as Guadagnino has broken the mold. This isn’t the twirling ballet of Argento’s original, or even of Darren Aronofsky’s Black Swan (but his Mother! feels like kin). It’s the sweaty, stompy moves of modern dance, with limbs and bare feet flung like weapons. (In one scene, they are, literally and grotesquely.) Meanwhile, just as Suspiria’s physicality has been made earthier, there’s been an expansion of the historical context, with Berlin’s Nazi past closer in memory—and Baader-Meinhof rioters in the streets. A teetering old psychologist, Dr. Klemperer (unknown actor Lutz Ebersdorf, who, thrillingly, looks a lot like Swinton in wrinkly prosthetic drag), visits the memorial of his missing lover, separated during the war. He’s an unlikely detective but that’s who this codger becomes; it represents Guadagnino’s riskiest move, bridging real-life atrocity to witches and androgyny. But it’s essential to the piece.

Hey, aren’t we talking about a horror film? Yes, but only if those who care about what that term actually means open their minds a little (or a lot). As if sensing its own intellectual imposition, Suspiria gets gooier by the end—I preferred the creepy buildup—and these croaking, climactic scenes have the slippery weave of a nightmare. It’s only hours afterward that Guadagnino’s film will cohere for you and yield its buried treasures: the bonds of secret sorority, the strength of a line of dancers moving like a single organism, the present rippling with the muscle memory of the past. It’s so good, it’s scary.