The best speakeasies in the US

Having signs outside is so last decade; the best speakeasies in the US incorporate secret entrances to entice their clientele

These days, you never know where you'll find a bar: tucked in an alley, down a staircase, behind a back wall, or through a piece of furniture. Look too quickly and you just might miss the best speakeasies in the US hidden in plain sight.

What were once secret bars serving clandestine cocktails during Prohibition are now a concept to evoke a setting still as alluring and intriguing. Just like decades ago, many speakeasies are hidden or disguised as things they aren't, a storage room, a business, or just another art mural, require a password or elaborate process to gain entry, and serve up mystery and surprise. The name comes from bartenders employing patrons to be quiet and "speak easy" during Prohibition. In doing so, police officers found it hard to bust bars because the locations were hush-hush and the drinkers discreet.

While drinking on the down low and following a strict set of house rules isn't new, the best speakeasies in the US, which weren't around during Prohibition, embrace the concept, character, and cocktails.

The best speakeasies in the US 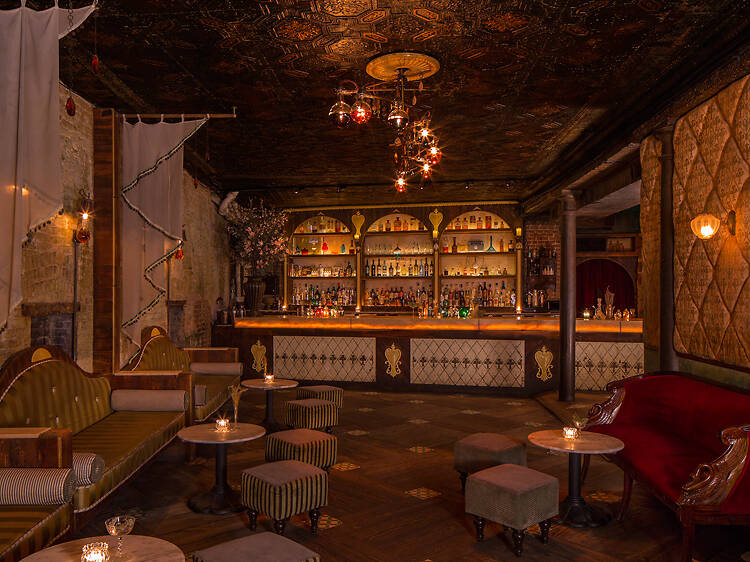 It's first come, first served at Apothéke, if you can find it. Tucked behind a 200-year-old door underneath a 'Gold Flower Restaurant' sign at 9 Doyers Street in Manhattan's Chinatown, this lounge was once an opium den and its decor is inspired by apothecaries. Since 2008, Apotheke has been serving medicinal-inspired cocktails made with organic produce, herbs, and botanicals and a curated selection of absinthe. Cocktail categories include aphrodisiacs like the Deal Closer (Quinoa Vodka, Horny Goat Weed tea, cucumber, mint, lime, agave, and vanilla essence), euphorics like Devil's Playground (gin, dragon fruit, prickly pear, lime, agave, and‏ absinthe mist), and stress relievers like Pink Panther (rum with palo santo, blood orange, pink guava, coconut milk, lime, and agave). Apothéke is so popular it opened an outpost in downtown Los Angeles in 2018 and a second New York location, Apotheke NoMad, this year. 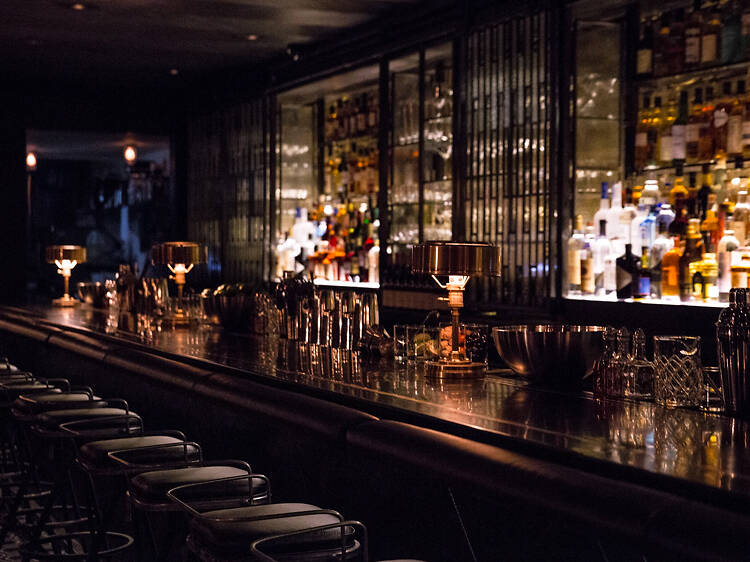 For those in the know, an old school cocktail bar can be found in the lower level of 600 F Street NW (the stairs leading to the entrance are at 6th St NW, across from the fire station). The Art Deco-style decor is the perfect setting for classic cocktails and upscale bites like fine cheese, charcuterie, and Petrossian caviar. Denson Liquor Bar's menu includes beer, wine, and cocktails like the herbaceous Pepino Fresco (London dry gin, cucumber water, lemon, and sugar topped with soda and served on the rocks with a cucumber slice) and the spirit forward Branca Ave. (Cocchi Vermouth di Torino and Fernet Branca served with a large rock and an orange twist), a twist on the boulevardier. 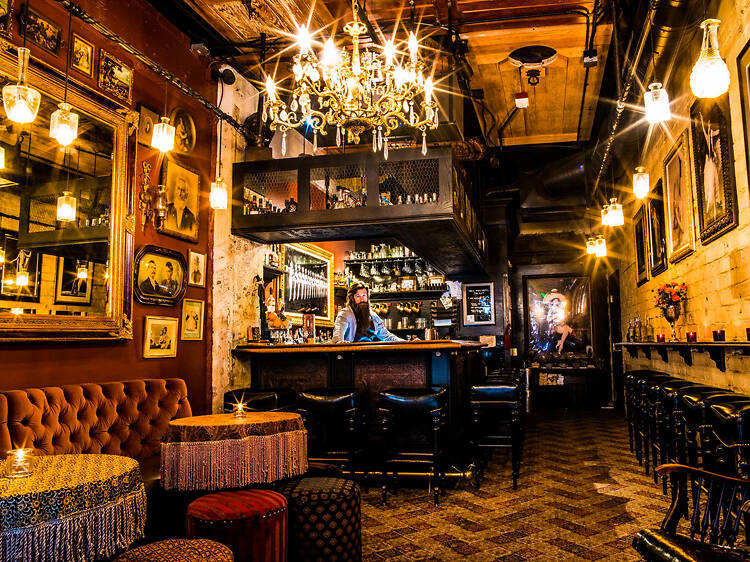 We'll come clean—we love this place. Located inside the cocktail lounge Commonwealth in downtown Las Vegas, entry to the Laundry Room is strictly by reservation only. Located beneath a stairwell, the Laundry Room serves 27 expertly crafted cocktails to just 22 guests and occasional live piano music. The speakeasy's name is a nod to the space's history as the former laundry room for El Cortez across the street. The affable bartenders will make custom cocktails based on your desires while promising not to air your dirty laundry. 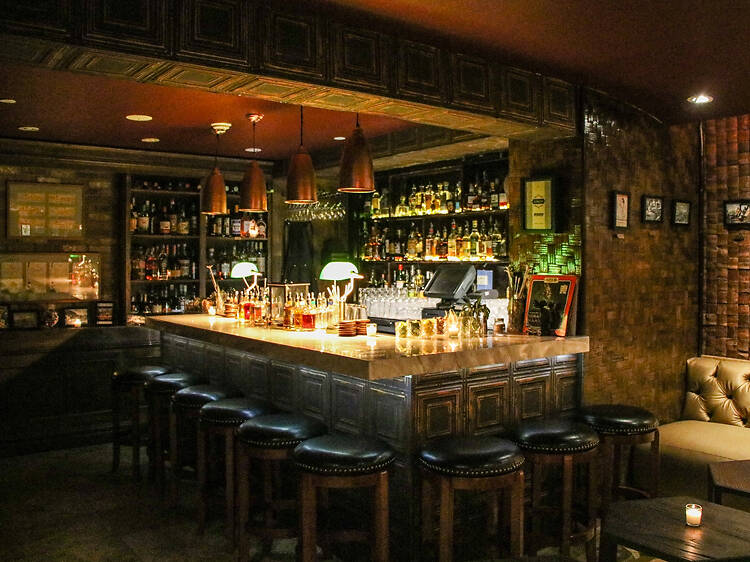 Tucked down a hallway and behind a curtain a half-level lower than the Viajero hostel lobby, Swizzle Rum Bar & Drinkery is a nautical-inspired bar in South Beach that opened in 2016. As if the name didn't give it away, the specialty here is rum, offering 150 varieties in well-crafted cocktails like the Rhum Swizzle (100 Proof Rhum J.M. swizzled with watermelon shrub, lime juice, and pineapple juice), Besame Mucho (Clarion Sajous, Ojo de Tigre Mezcal, and Benedictine rolled with hibiscus water, lime juice, and habanero tincture), and Madame Hong (Campari shaken with strawberry purée, Peychaud's bitters, and fresh lemon juice served in a chilled flute glass with Prosecco. Food options include jalapeño and cheddar croquettes, shrimp ceviche with passion fruit, and banana bread pudding. 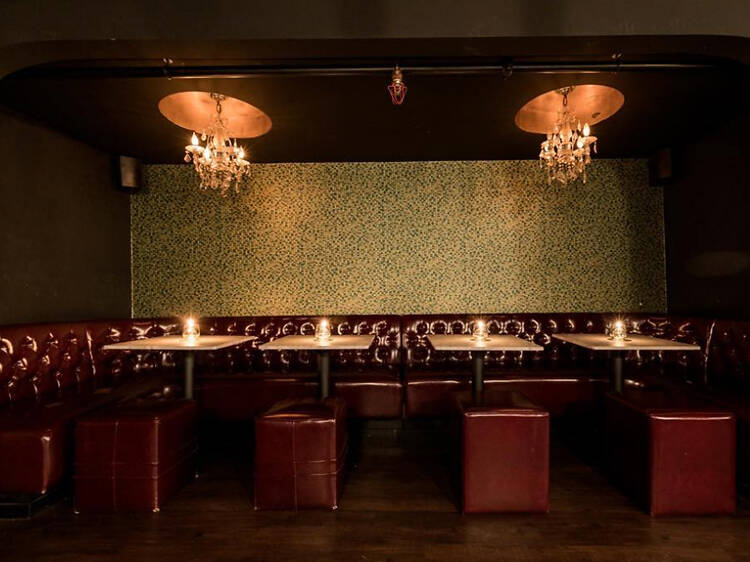 Originally opened in a subterranean space in 2009 and then closed during the COVID-19 pandemic, the latest iteration of The Franklin Mortgage & Investment Company is back. This time, the speakeasy is on Schubert Alley between 17th and 18th Streets near Rittenhouse Square. The unmarked drinking establishment is a bit tricky to find, but lost patrons can phone the bar for directions. Sip craft cocktails made with house-made infusions, syrups, and bitters in comfortable Art Deco-inspired surroundings. The offerings of head bartender Andrew Peterson include Per My Last Email (Erstwhile Mezcal, yuzu, grapefruit, and bird’s eye chili), Drinking Before Dawn (Beefeater gin, fresh passion fruit, and lemon), and Gibson (Gracias a Dios Mezcal, agave, gin, house onion brine, dry vermouth, and grapefruit royal stir). 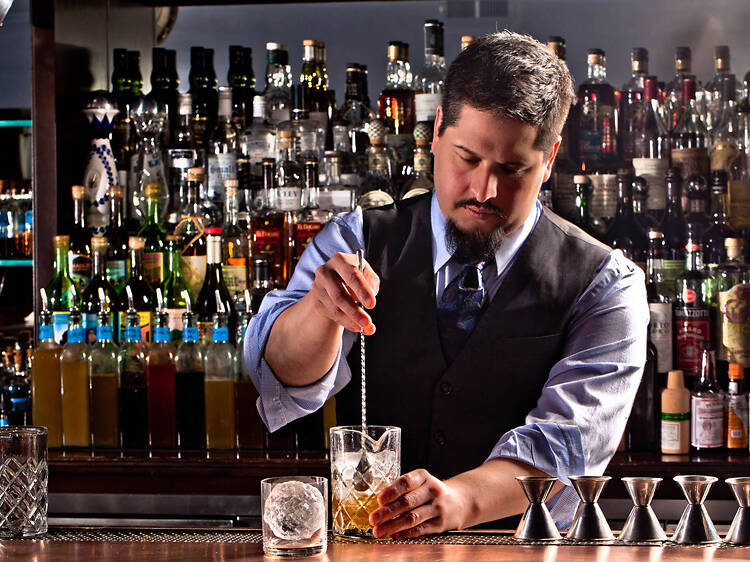 Most cocktail connoisseurs know about Grant Achatz and Nick Kokonas' seminal The Aviary, but fewer venture to The Office downstairs. The converse of the innovation and flair on display upstairs, The Office focuses on expertly crafted classic cocktails and rare, vintage spirits served in an intimate, sumptuously-appointed space. Reservations are essential with options ranging from ordering à la carte from the drink menu to a guided tasting of Macallan single malts to the $195 The Dusty Bottle Experience featuring a three-course cocktail progression paired with light bites. It's a night out you, and your Instagram account, won't soon forget. 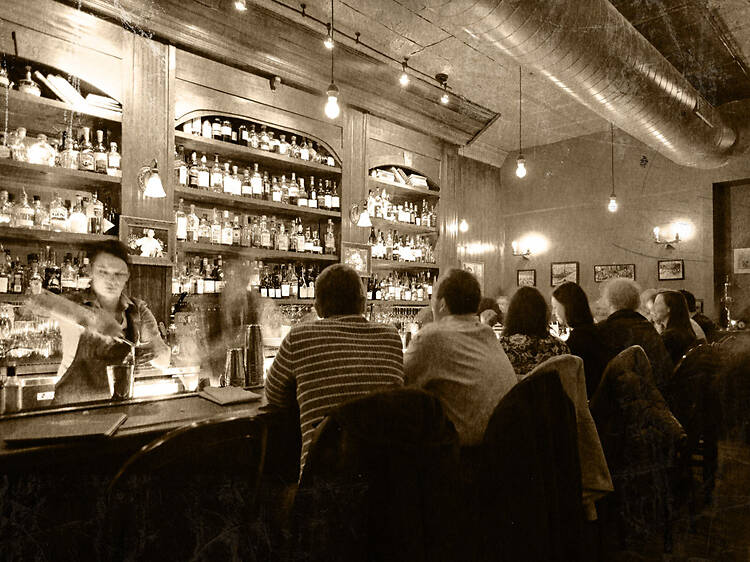 There's more to this corner bookshop than just a good read. Behind a bookcase, enter a world of comfort and craft at Williams & Graham. This is a serious drinking place with knowledgeable bartenders handcrafting original creations from a library of more than 500 globetrotting spirits, 60 classic cocktails like the Sazerac (Rittenhouse Rye, sugar, absinthe, and Peychaud's bitters) and Rusty Nail (Balvenie DoubleWood 12 Year and Drambuie) and anything your heart may fancy. Each cocktail can be perfectly paired with upscale bar bites, ranging from roasted bone marrow to a beef rib to burgers. 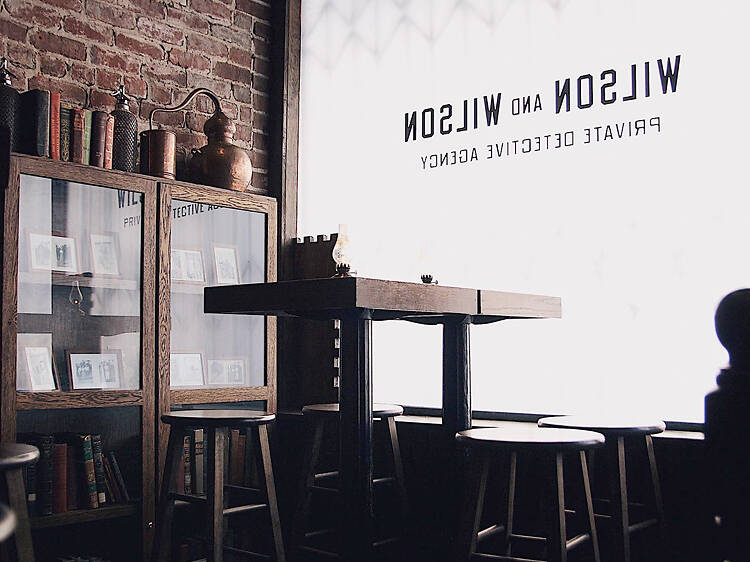 Nestled inside Bourbon & Branch, a bar opened in 1867 that was once an actual speakeasy during Prohibition, Wilson & Wilson Private Detective Agency requires a reservation and a password to snag a spot to sip cocktails. The fictitious detective agency themed speakeasy is one of four spaces within Bourbon & Branch, which also has The Library (ring the buzzer and say the password 'books' to gain entry) and the JJ Russells Room, named for John J. Russell, who purchased the business in 1923 and called it 'JJ Russell’s Cigar Shop.' Patrons must abide by the house rules in each bar-within-a-bar space or risk being asked to leave. 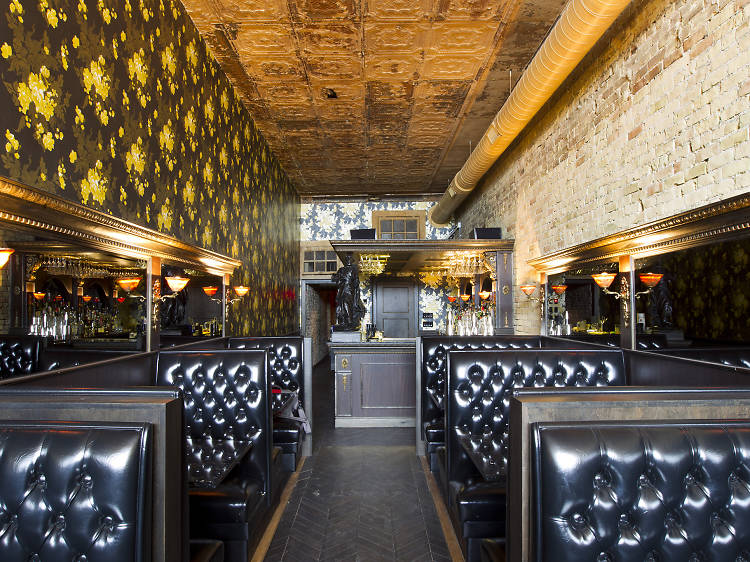 The reservations-only Midnight Cowboy takes its name from its sordid past. The former brothel was run under the pretense of a massage parlor called Midnight Cowboy Modeling Oriental Massage. Cleverly named craft cocktails like the flaming Chai Bella (chai tea-infused Bacardi Ocho Rum, Blackstrap rum, apricot, orange, lactic acid, flaming lime, sugar, and spice) and Aqua Dillenia (El Tesoro Reposado, Aquavit, passion fruit, cucumber, and grapefruit celery salt) are the specialty of the decade-old speakeasy in downtown Austin. Look for the vacancy sign—if it's lit, it's your lucky night as the light signals that walk-ins can be accommodated on the patio. At the secret entrance (look for the 'Midnight Cowboy Modeling' sign), ring the doorbell labeled Harry Craddock, the famed bartender credited with serving the last legal drink in the U.S. before Prohibition. 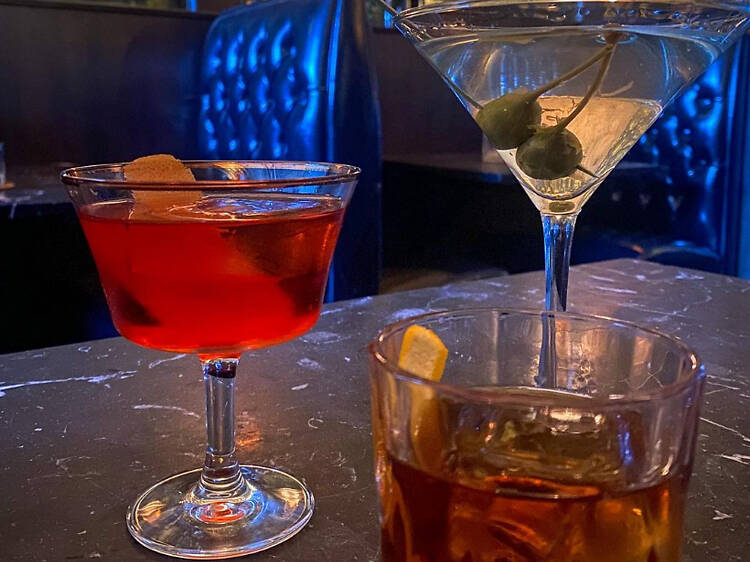