Is there a more iconic summer snapshot than that moment you crest the top of a roller coaster drop? Long lines and high temps be damned: Amusement parks are the season incarnate. When you’re tired of napping on the best beaches in the USA and seek thrills that are bit wilder than the ones found at the best water parks in the USA, grab your friends and family and visit the best amusement parks in America, filled with classic coasters, unforgettable death drops and other wild rides. When the weather gets cooler, you’ll want to visit the best indoor amusemet parks in America instead. 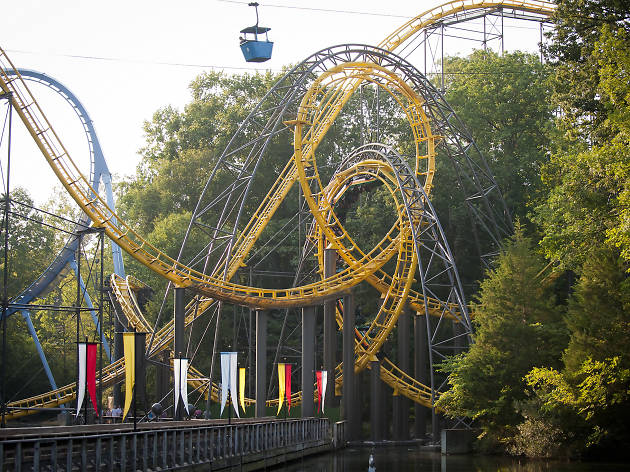 Fun fact: We once spent the night at Busch Gardens after a freak tropical storm trapped us weather-ignorant folks in the park for hours. Young children screamed and wept as lightning splintered the sky. And we’d still go back; that’s just how good it is. Among the notable coasters is the now classic double-looping Loch Ness Monster, which might have kick-started the country’s modern coaster craze; and the Tempesto, which derives its inspiration from the 1920s Italian daredevil—the coaster cars rev forward and backward once before ascending vertically into a series of insane corkscrew inversions while 154 feet in the air.

Must-ride: The brand-new InvadR is actually a throwback: a nine-hilled, Viking-themed woodie, the first wooden coaster in the park’s history. 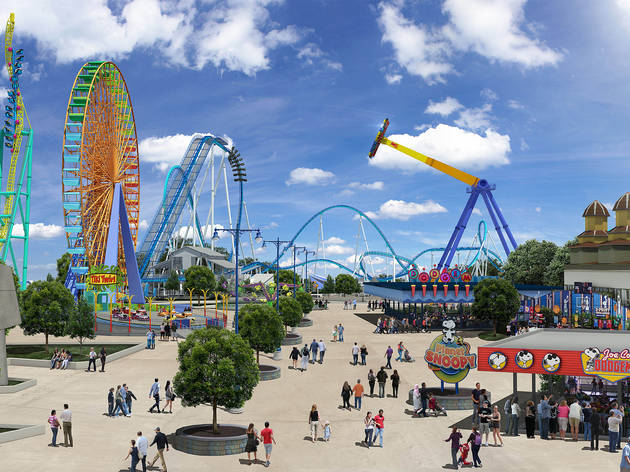 It well may be the country’s amusement park standard-bearer: 365 acres of both classic and cutting-edge rides located on a peninsula in Lake Erie. The second oldest amusement park in America, Cedar Point mixes its pioneering coasters with water rides and classic throwbacks (Ferris wheel, sky ride, adult carousel). Among the standout rides is the Rougarou, a floorless coaster that tosses you upside down no fewer than four times. When you’ve reached peak adrenaline rush, reboot at the beachfront or pool deck at Hotel Breakers.

Must-ride: At the “Roller Coaster Capital of the World” (17 thrill rides and counting), it’s hard to choose a favorite, but we’ll go with the Millennium Force, which cranks up to 93 miles per hour and includes an inaugural 80-degree drop that robs you of all appreciation of the surrounding water views. 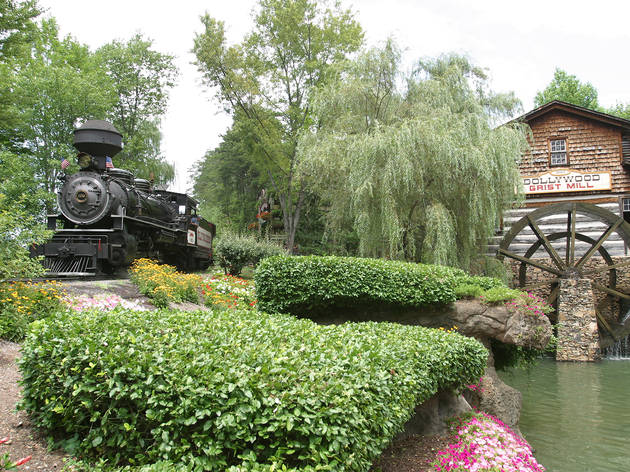 Why Dollywood? Because its namesake is Dolly frickin’ Parton, for starters. And because the five-mile water ride encourages you to attack the rafters behind you with soaker guns. And because the park includes an indoor coaster called Blazing Fury that has you faux-outrunning an uncontrollable inferno. And because the Mystery Mine steel coaster includes a 95-degree drop (how is that possible, science-wise?) that ends in a darkened tunnel. Are Northeast amusement parks even allowed these sorts of near-felonious thrills?

Must-ride: The Dropline is the park’s newest heart stopper, elevating guests some 200 feet over Timber Canyon before dropping them in freefall. In that split second before plummeting, you’ll enjoy an incredible view of the nearby Great Smoky Mountains. 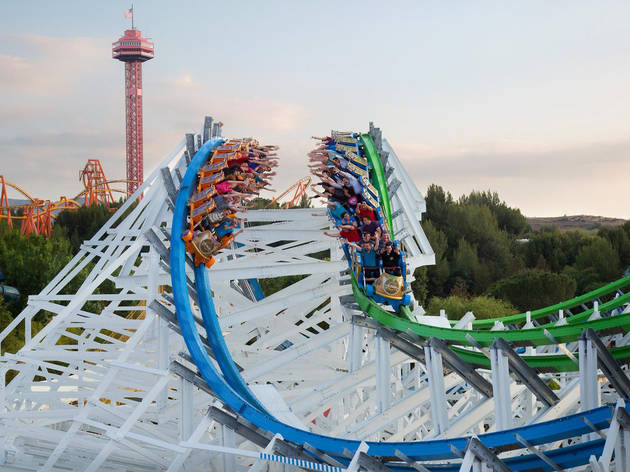 Attention, LA neophytes: The cool kids don’t go to Disneyland. Instead they head north to Six Flags Magic Mountain for rides unlike any you’ve seen: the Superman, which drops you 415 feet in seven seconds at speeds up to 100 miles per hour; the Ninja, a suspended coaster that swings you sideways a full 90 degrees; and the Slingshot which, well, slingshots you upwards, then upside down, then straight towards the restrooms for a post-aerial hurl. Twisted Colossus, a woodie-steel hybrid,  reinterprets the park’s original, 36-year-old wooden coaster for the modern age. Along with the 116-foot, 80-degree drop comes a 360-degree G roll and a throat-clogging, slo-mo inversion that leaves you dangling for what feels like about 15,000 hours.

Must-ride: The spanking-new Battle for Metropolis is a 4-D, virtual reality experience in which riders are designated members of the Justice League and fight Lex Luthor and The Joker. 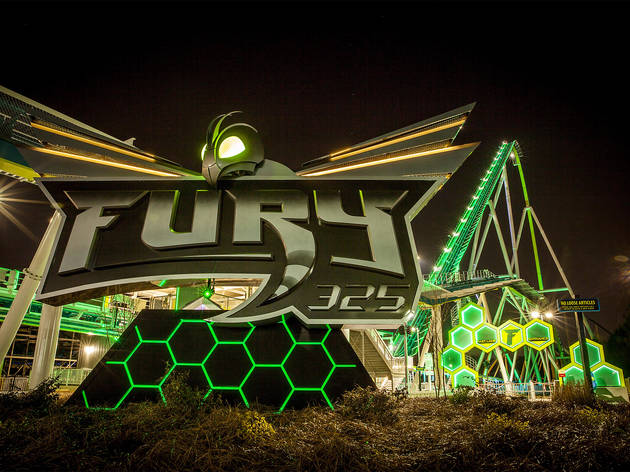 They don’t call it the “Thrill Capital of the Southeast” for nothing. (At least, they better not.) Carowinds gives five of its most daring coasters the “Aggressive Thrill” seal of approval, which translates to coaster rides stuffed with consecutive 360-degree loops, backward inversions and uphill helixes. The Fury 325, new in 2015, is North America’s longest steel roller coaster and boasts speeds up to 95 miles per hour. This is also a twofer: Access to the Carolina Water Park is included in the price of admission, which means you can break up your roller coaster dips with waterslide plunges.

Must-ride: The new Country Fair plays homage to the small-town fairs of yore with throwback rides like the Zephyr. 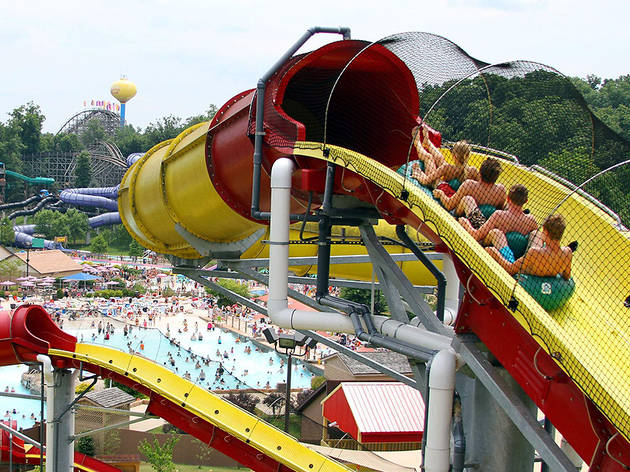 The calling card at Holiday World is surprisingly anachronistic: The Voyage, a 1.2-mile-long wooden coaster that still manages to pack a 21st century punch (and routinely lauded as the best woodie in America). Think 90-degree banking, 24 seconds of airtime and five underground tunnels. Those who prefer water to land can scurry off to the connected Spashin’ Safari Water Park, which includes two ginormous water coasters, and routinely wins accolades as one of the best water parks in America.

Must-ride: The Thunderbird Steel is the nation’s first launched wing coaster—which means that riders sit suspended on either side of the track (i.e. nothing sits between them and the open air) and are also immediately propelled into high-speed loops and barrel rolls (i.e. no creaky use of gravity to gather speed). 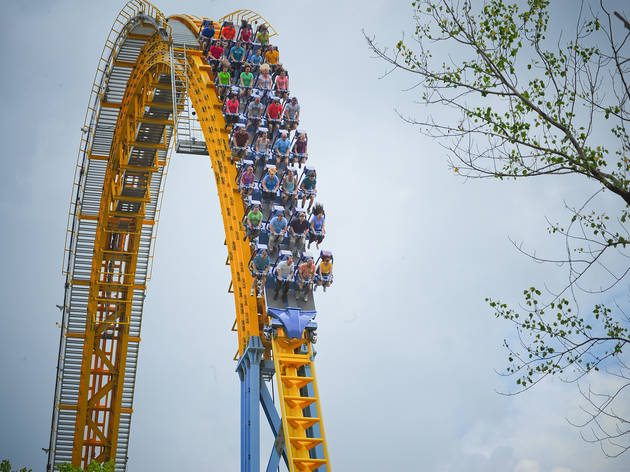 “Hersheypark as in Hershey Chocolate?” Yes, actually, which would explain the height charts broken down by candy bar. But don’t get lulled into thinking this is a kids-only attraction: Among the steel coasters is the inverted Great Bear, which eventually takes riders into a deranged loop called an Immelmann, named after a World War I aerial maneuver. Laff Track is an unlikely combo of roller coaster and funhouse, complete with a hall of mirrors.

Must-ride: The new Hershey Triple Tower is admittedly a shameless candy ad, but never mind that: the three drop towers—Hershey’s Kisses Tower, Reese’s Tower and Hershey’s Tower—offer different heights and drop speeds, the tallest (187 feet) reaching speeds of up to 45 miles an hour.

Everything is indeed bigger in Texas, roller coasters included. For starters, Six Flags Fiesta Texas houses Batman: The Ride, the world’s first 4D free-fly coaster, in which you’re flipping upside down within your seat even as you hit different drops. Inspired by its namesake, the Boomerang takes you through myriad loops and corkscrews, pauses and then returns you the same way you came, only backwards. And the top spinner Der Twister almost defies explanation—just know that you’ll be upside down and twisted around for almost the entirety of the ride.

Must -ride: Thunder Rapids water coaster, new at the water park this year, is the largest rocket blast water coaster in the world—943 feet long, including 350 feet of tunnels. 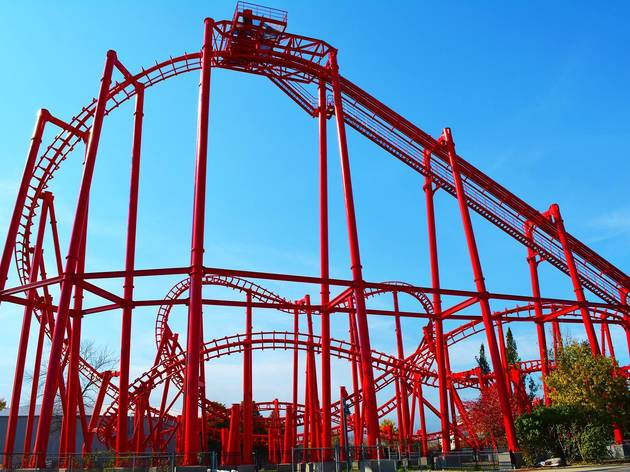 After a four-year closure, Kentucky Kingdom reemerged in 2015 with aplomb, debuting no fewer than eight new rides. The newcomers include Cyclos, a 360-degree swinging pendulum, and T3 (that’s Terror to the Third Power), which has you suspended and upside down and otherwise quaking for 2,260 feet of smooth steel track. The attached Hurricane Bay water park includes an enormous wave pool and Deep Water Dive, America’s tallest water slide (that’s a 121-foot drop).

Must-ride: You can’t beat Lightning Run for the sheer initial thrill: a 100-foot drop at 80 degrees. 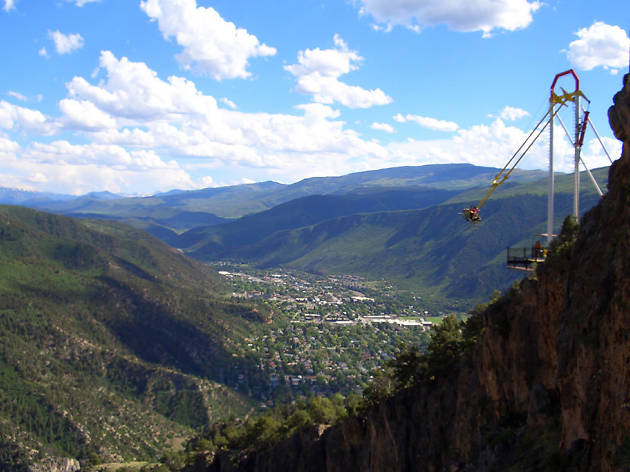 If you prefer your thrills at high altitudes, you should look into Glenwood Caverns, situated 7,000 feet above sea level. The Cliffhanger is actually the highest elevation coaster in North America, granting you incredible views of the Colorado River before you begin your initial plunge. The Alpine Coaster, the very first of its kind in the US, lets you race 3,400 feet down the track as you slow down or rev up your speeds. As for the Giant Canyon Swing, it’s exactly as advertised: a four-person swing that hurls you back and forth some 1,300 feet above land at 50 miles per hour.

Must-ride: The Haunted Mine Drop is a true trailblazer: it’s the first ride in the world to drop visitors underground—and probably the only ride designed to mimic a 19th-century mining accident (actual miner ghosts appear before the 120-foot vertical drop).