The 13 best things to do in Valencia

Discover the best things to do in Valencia, a foodie hotspot complete with historic treasures and contemporary culture

A city famous for its devotion to arts and science as much as its commitment to delicious food, Valencia remains criminally underrated by enthusiastic visitors to the many delights of Spain. Underrated doesn’t mean ignored, of course, as many travellers make their way to cap i casal annually, yet this magnificent city on the Turia doesn’t seem to get the attention it deserves. With that in mind, let’s shine a bright light on vibrant Valencia.

Widely regarded as the true birthplace of paella, the best things to do in Valencia revolve around flavour and fragrance. The bars and restaurants of the city are tremendous warrens of activity where chefs make the most of the excellent ingredients found in the bustling markets. Valencia’s museums are magical, and its Old Town is a veritable time machine waiting to transport you to a very different time. Contemporary Spain at its very best? That’ll be Valencia.

Best things to do in Valencia 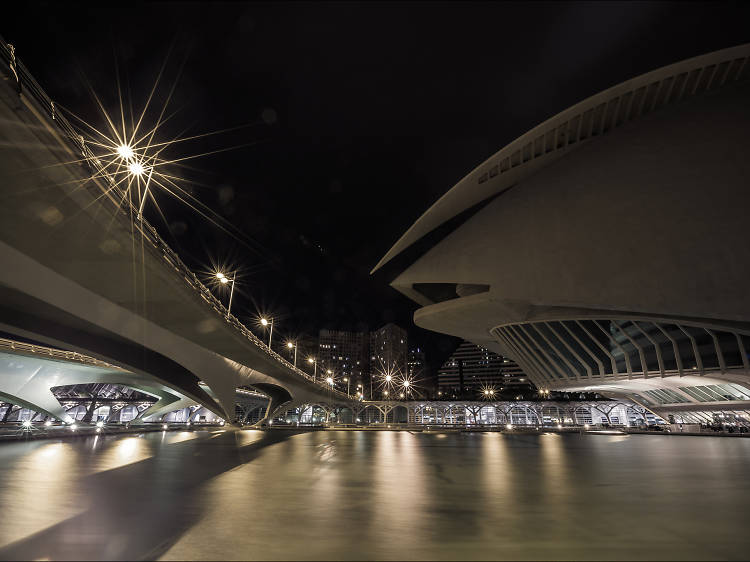 1. City of Arts and Sciences (CAC)

What is it? Valencia-native Santiago Calatrava designed this blazing white complex for the arts and sciences, an artful arrangement of giant sculptural shapes that house, among other attractions, an aquarium that looks like a wave, an opera house in the form of a ship, and a giant eye-cum-planetarium.

Why go? Go to watch the beluga whales wheel around the giant aquarium, have fun at the interactive science museum, or simply admire the daring contemporary architecture of what Spaniards voted one of the ‘12 Treasures of Spain’. 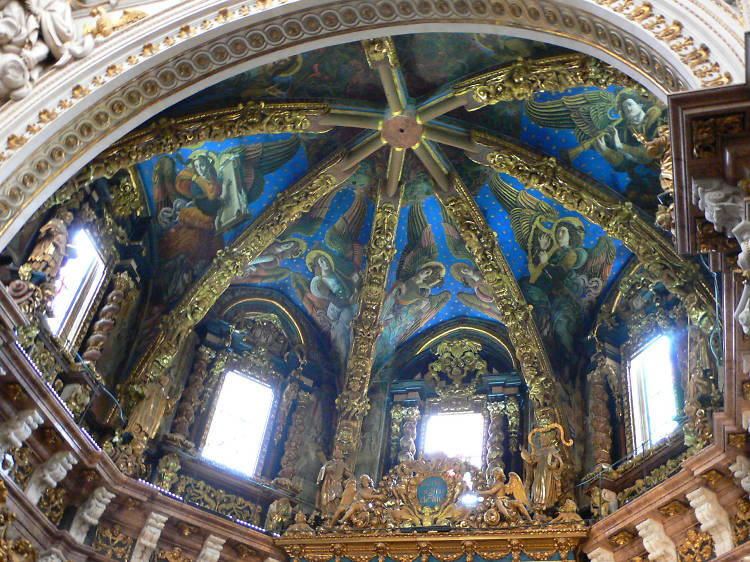 What is it? Valencia’s vast Gothic cathedral has a florid Baroque façade slapped on top, but inside is atmospherically dark and shadowy. It’s home to what some believe is the Holy Grail, but its crowning glory is the Micalet belltower – the city’s symbol.

Why go? Visit the Chapel of the Holy Chalice, where the jewelled cup (one of at least a dozen Holy Grail contenders) is theatrically displayed in an alabaster altarpiece. Puff your way up all 207 steps to the top of the Micalet for glorious views – and perhaps some deafening bells. 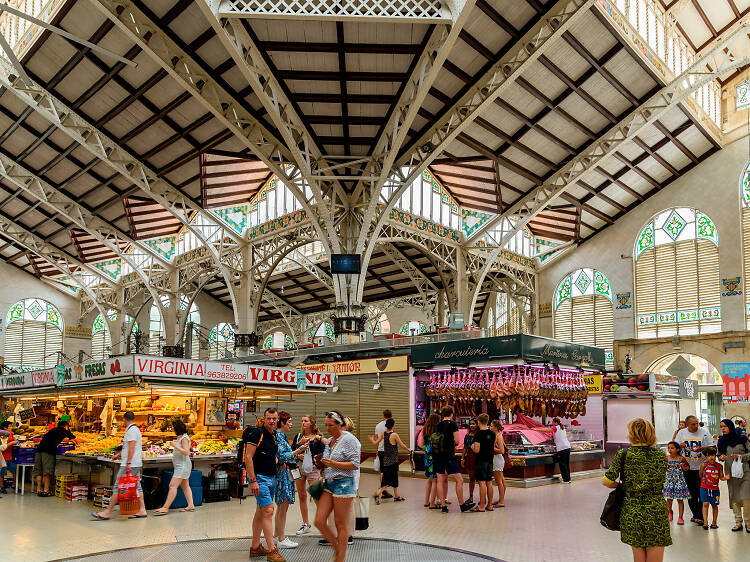 What is it? A glittering market of glass and iron, the Mercat Colón was virtually in ruins before it was spectacularly transformed through an award-winning renovation. Now it’s a gourmet hub, packed with shiny new restaurants and cafés.

Why go? Come to meander between the gourmet stalls, try some horchata (the refreshing Valencian tiger-nut drink), and a few tapas. If you’re looking for a proper market with fresh produce, head to the Mercat Central in the old town. 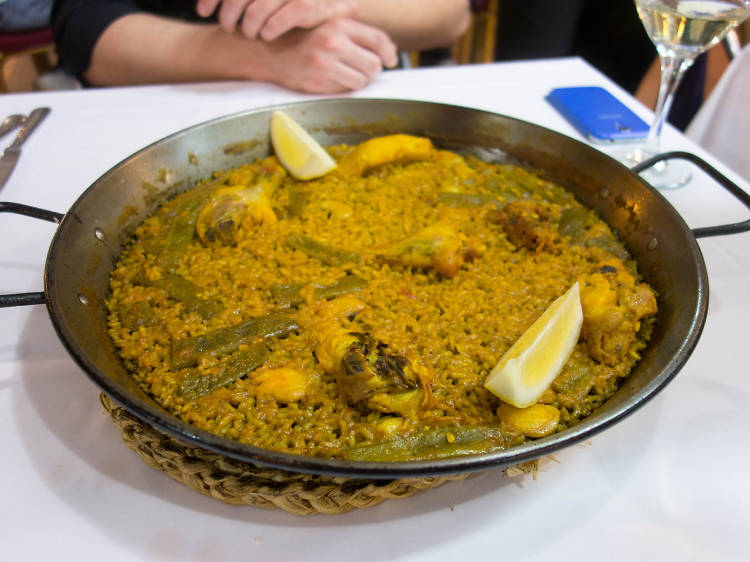 What is it? Paella, as everyone will tell you, was born in Valencia. And this is the best place in town for a slap-up paella lunch right on the seafront – just be sure to book early for a table on the terrace.

Why go? Hemingway loved it when it was just a beach shack, and the dining room is now covered in photos of celebrity visitors. But this cheerful, traditional restaurant hasn’t rested on its laurels, and the authentic paellas and other Mediterranean rice dishes are delicious. 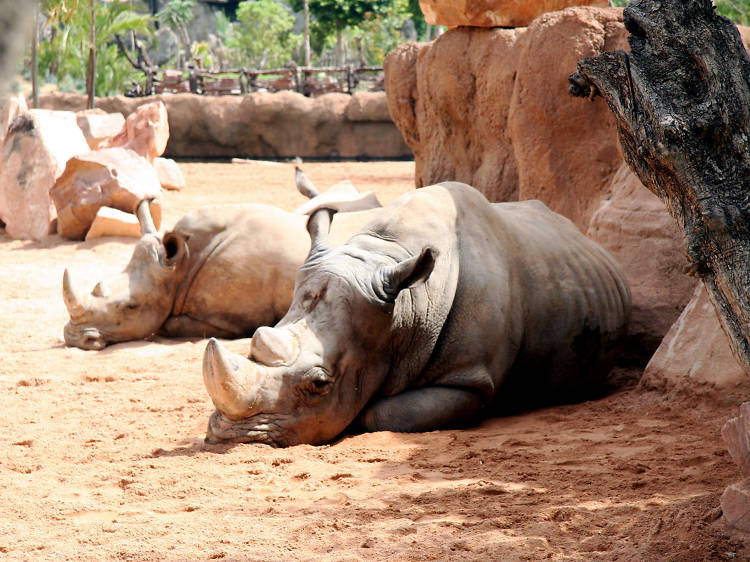 What is it? A huge and very carefully planned-out zoo specialising in a truly immersive experience for visitors (and animals).

Why go? The focus here isn’t just on the animals. Bioparc Valencia has created accurate and aesthetically pleasing habitats for its wildlife, including many different types of African flora perfectly suited to the big and small beasts that reside here. In a nice twist on a regular zoo, they’ve also opted for small rivers or glass screens in place of railings. Personal favourites? The lovely lemurs in the Madagascar zone and the hippos in the wetlands. 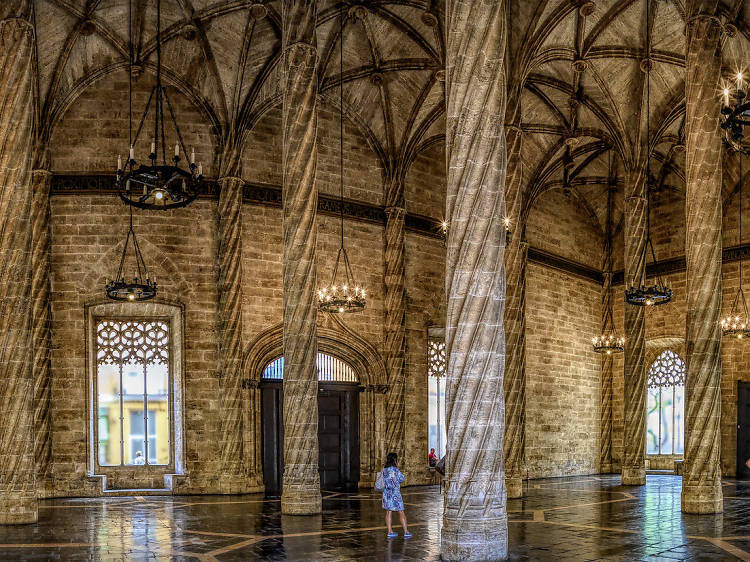 What is it? One of the finest civil Gothic buildings in existence, the fifteenth-century Silk Exchange was built at the height of Valencia’s Golden Age. Silk and other commodities came flooding into the city, then one of the most powerful on the Mediterranean coast.

Why go? This is one of the most beautiful buildings in the city, an ingenious construction that pleased its creators so much that they erected a monument to themselves. Check out the doorways and capitals inside and around the cloister for some saucy depictions of various sins – find the woman and her bellows, that’s all we’ll say. What is it? Valencia’s showcase museum of contemporary art, this gallery presents a fascinating overview of Spanish art over the last century, with challenging exhibits – paintings, sculptures, video installations.

Why go? This was Spain’s first modern art museum when it opened in 1986 and is still one of the most prestigious. A superb collection of iron sculptures by Julio González, a friend and contemporary of Picasso’s, forms the core of the collection, but don’t miss the usually excellent temporary exhibitions. 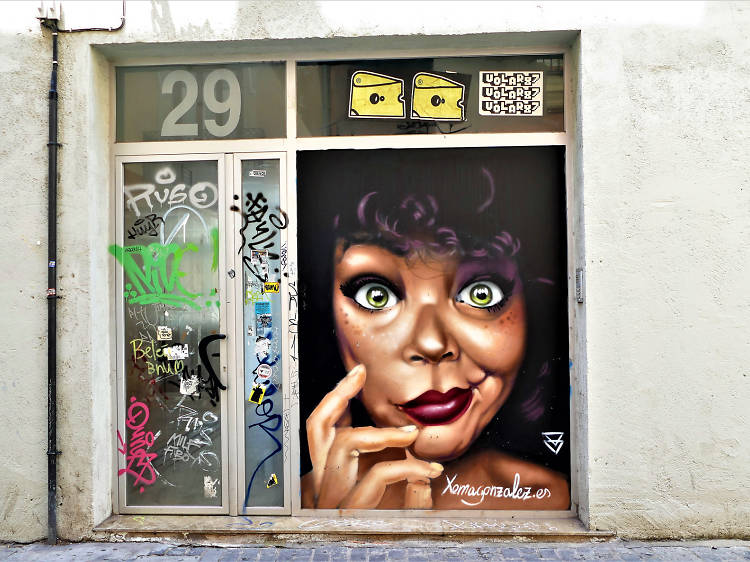 What is it? A tight-packed medieval warren within Valencia’s old walls, the Carme neighbourhood in the old town is full of off-beat boutiques, cafés and bars with an underground vibe. It’s the go-to spot for LGBTQ+ venues in the city, and it currently vies with Ruzafa for the title of Valencia’s hippest hangout.

Why go? Come for the art – whether Insta-perfect street art or the contemporary art in the Convent del Carme art centre – and the appealingly scruffy, anything-goes vibe in the cafés and bars. 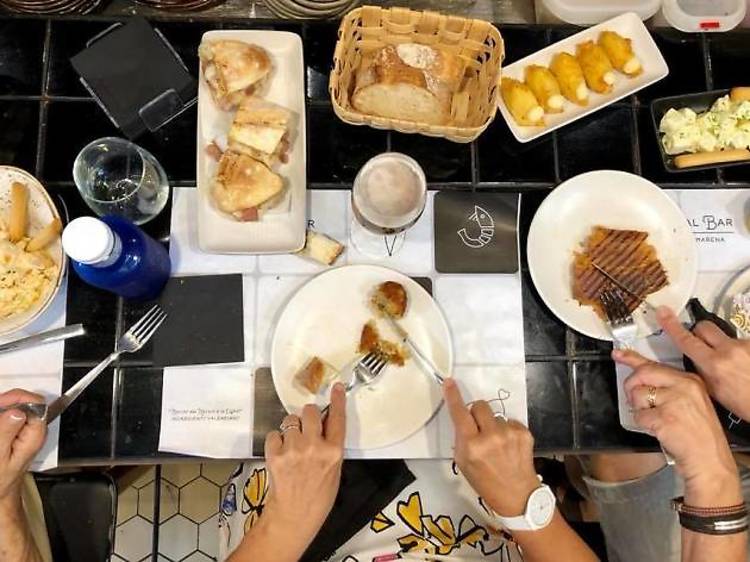 What is it? Multi-award winning chef Ricard Camarera’s modern take on the traditional Spanish counter bar.

Why go? Located right in the centre of the striking Mercat Central, this always-popular restaurant uses expertly sourced local ingredients sold in the market to make succulent, tempting tapas and satisfying bocadillos. If you get really taken with Camarera’s handiwork (and who wouldn’t) we recommend checking out his other Valencian restaurants, such as the Canalla Bistro in Russafa (Ruzafa) and, of course, the Michelin-starred flagship restaurant bearing his name. 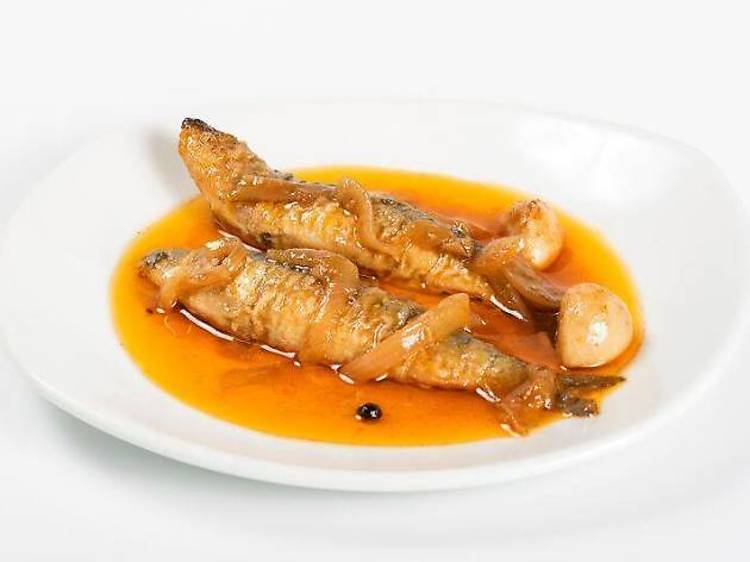 What is it? A deliciously old-fashioned tapas bar, this barrel-lined spot is a long-established stalwart in the romantically faded fisherman’s district of Cabanyal. Perch on a high stool, and tuck into high-quality tapas prepared with the freshest local ingredients.

Why go? Perhaps the best traditional tapas bar in town (and hugely popular, so book in advance), this serves seasonal local delicacies like the little clóchina mussels and grilled artichokes. Work it off with a stroll around the traditional tiled houses of the Cabanyal neighbourhood. 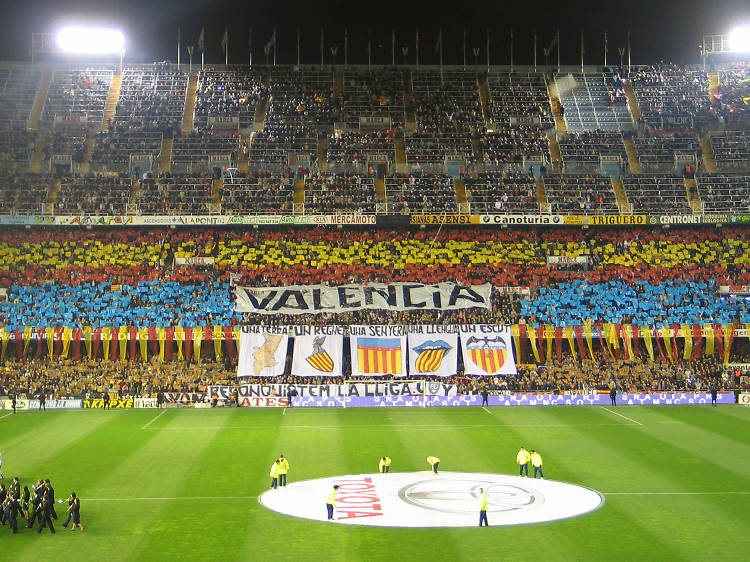 What is it? The Mestalla, which has a spectator capacity of 49,500, has been the home stadium of top Spanish league team FC Valencia since 1923. Best if you can catch a match, although devoted footie fans will also enjoy the stadium tour.

Why go? FC Valencia has some of the most ardent fans in La Liga, and the Mestalla stadium boasts the steepest stands of any of Europe’s major grounds. The result? Sheer intimidation for visiting teams – and perhaps the most electric place to watch a match in Spain. 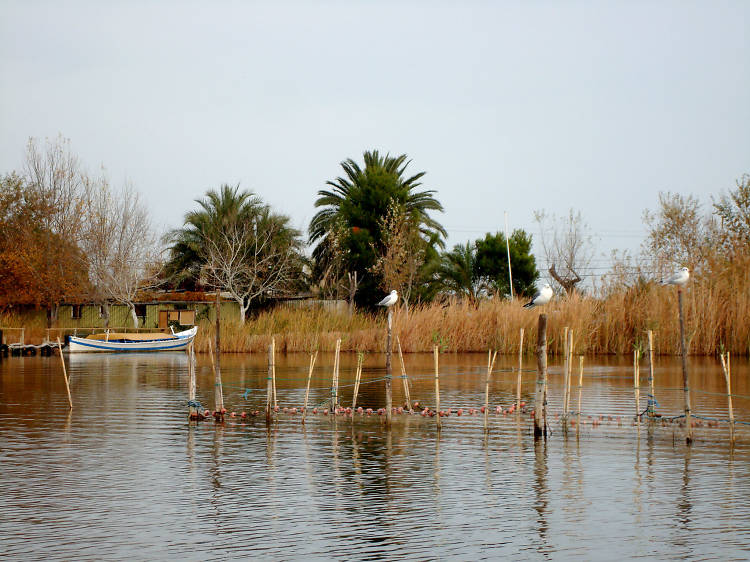 What is it? This lake and natural park, 8km south of the city, is one of Spain’s most important wetlands. Surrounded by rice fields, which glow golden in autumn, its undoubted beauty is somewhat marred by factories, except at dusk.

Why go? The park has nature trails and bike paths around the lake and is home to more than 250 bird species. Spend the day at the unspoilt beach of La Devesa nearby, then visit the lake in the evening for a sunset boat ride. 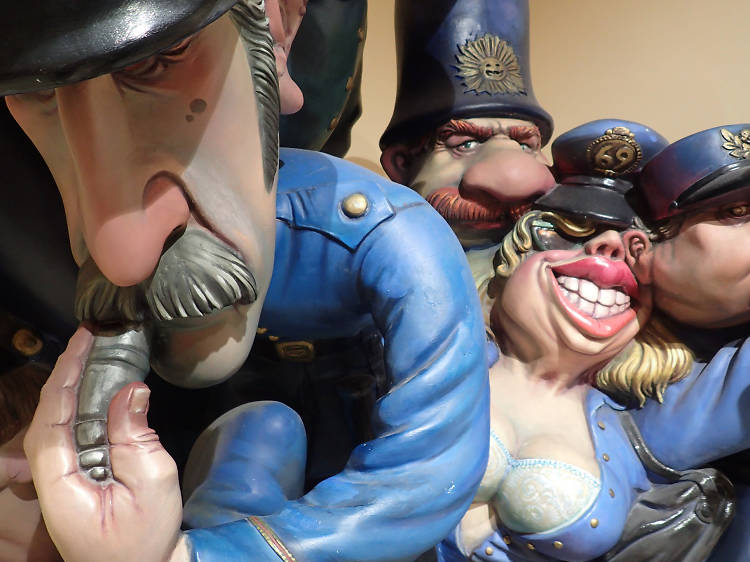 What is it? If you can’t make it for the fun and fireworks of Valencia’s fiery festival of Les Falles, at least you can get a taste at the Falles Museum. The ninots (papier-mâché characters) saved from the flames are all displayed.

Why go? To learn all about Les Falles, Valencia’s biggest traditional festival. The falles are huge papier-mâché creations (that can take a year to create), which are paraded through the streets, and then tossed onto bonfires. Only the best ninots (miniature versions of the falles) are saved and displayed here. 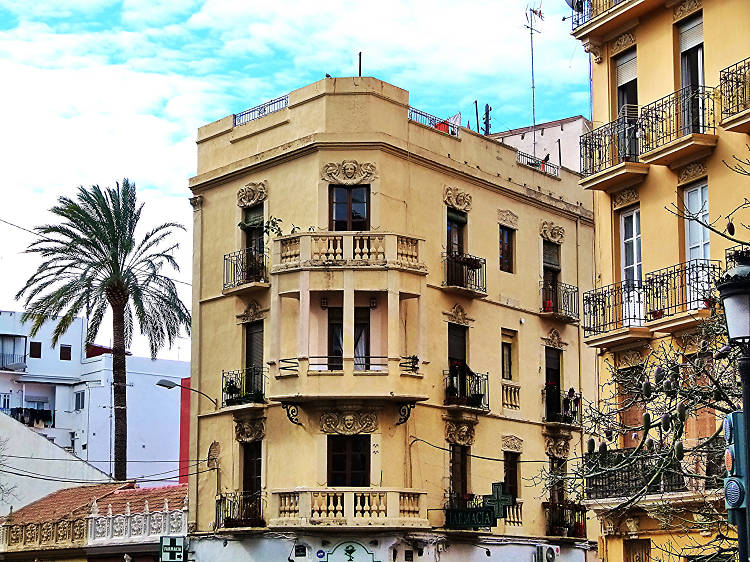 What is it? Arguably the coolest neighbourhood in town (Carmen fans may disagree), Ruzafa is a mix of old-fashioned street life (in the form of a great market and pretty squares), with some of the city’s most talked-about restaurants, its slinkiest bars and funkiest boutiques.

Why go? Ruzafa is a great neighbourhood for an aimless amble – popping into the fantastic little market perhaps, lingering over lunch at one of the stylish cafés, followed by a spot of shopping in the independent boutiques. Things heat up after dusk when the bars start filling up.