The best coffee shops and cafés in Washington, DC

With so many bookish staffers pulling late nights on Capitol Hill and engineers pulling late nights in their start-up’s home office, you’d think DC would be rife with coffee shops. You’d be right. DC’s caffeine scene is not entirely 24/7—though some cafés, like Tryst in Adams Morgan, come close. With sprawling couches (and an occasional Washington Post), outdoor seating, and such elevated menu items as house-made fig scones, chocolate croissants and Virginia sausage sandwiches, these days coffee shops in the capital offer a lot more than a mere cup of joe.

The best coffee shops and cafés in DC 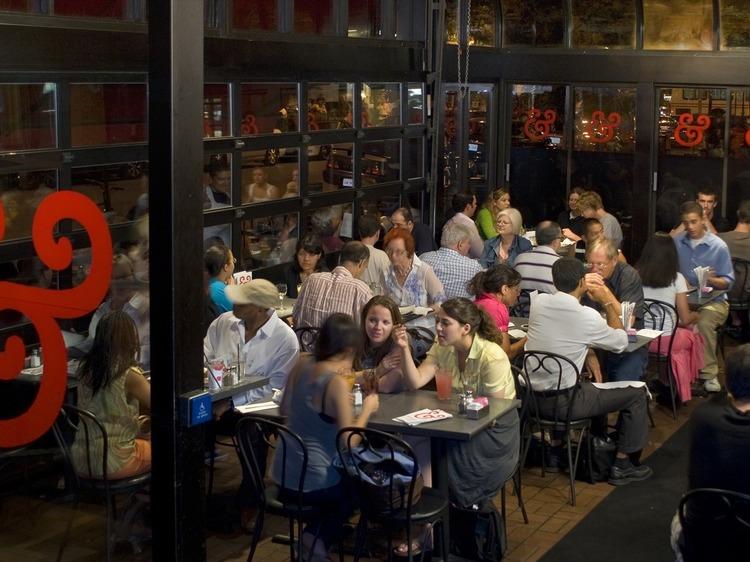 The best place in DC for a first date—you meet in the adjoining Kramerbooks and rejoice or despair at your new friend’s taste in literature—Afterwords Café tries to be all things to all people. Bustling and capacious, the glass-enclosed dining room serves food from morning until late night, including "sharezies"—make-your-own appetizer platters, ambitious New American dinners with suggested wine or beer pairings, and decadent desserts. You and your date are sure to find common ground somewhere on the menu. And when you’ve got to know each other better, you can return for Afterwords’ hearty weekend brunch. 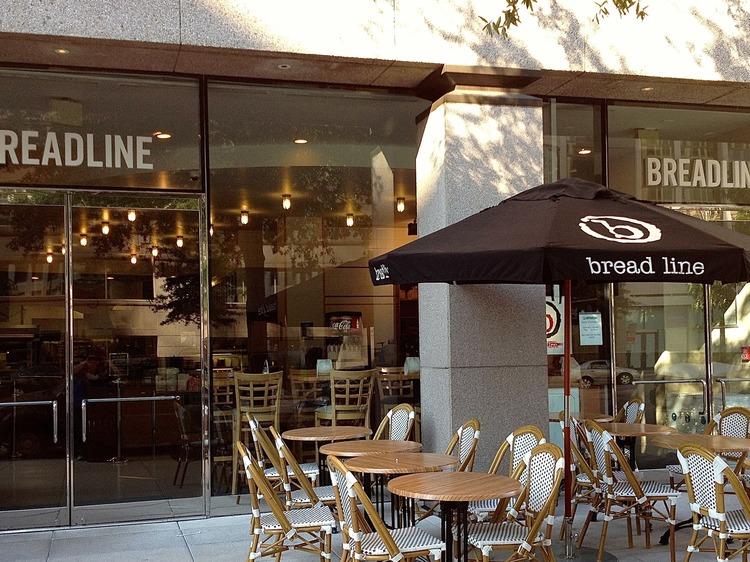 On a Downtown block with plenty of other quick breakfast and lunch options available in the area, Breadline is always packed. This counter-order sandwich bar has earned cult status among Washingtonians for its soups, salads and gargantuan sandwiches, made with artisanal loaves, which are baked on the premises, and quality fillings. The food isn’t cheap, but the portions are large enough to keep the average person going all day. The turkey sandwich, for example, comes with so much meat that it is physically impossible to keep more than half between the slabs of fresh bread. If you’ve got room, add some boutique soda and Route 11 chips—Virginia-made potato chips that come in a variety of novelty flavors. 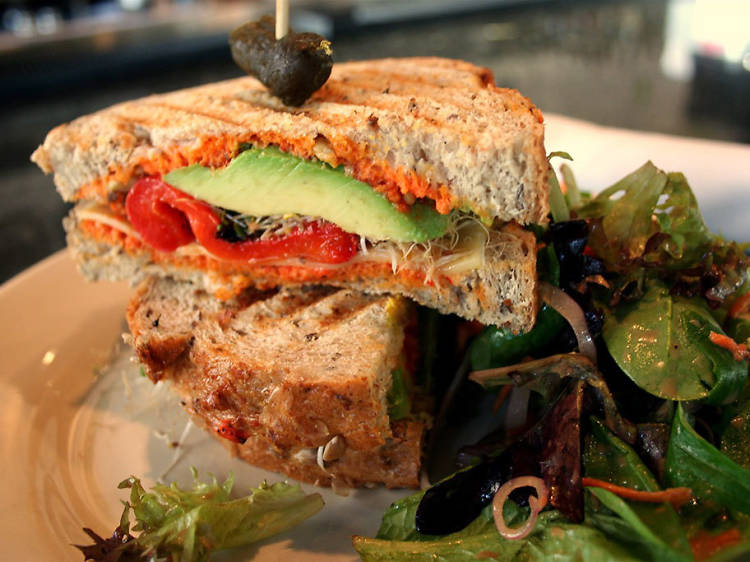 It may not have the most exciting food (burgers, salads, sandwiches, pizza), but no matter. Busboys & Poets is an exciting space in and of itself. Located at the corner of 14th and U Streets, NW, it was established by Andy Shallal, an Iraqi American artist, restaurateur and activist in 2005 in an area with a history of 1960s civil rights activism. With its communal tables, sofas and cushy chairs, Busboys is the ultimate urban living room, where people meet for coffee or drinks or a snack in between meals. Open mic poetry readings, live music and book discussions are also on the menu.Other locations: 1025 5th Street, NW (1-202 789 2227); 4251 South Campbell Avenue, Arlington, VA (1-202 379 9757). 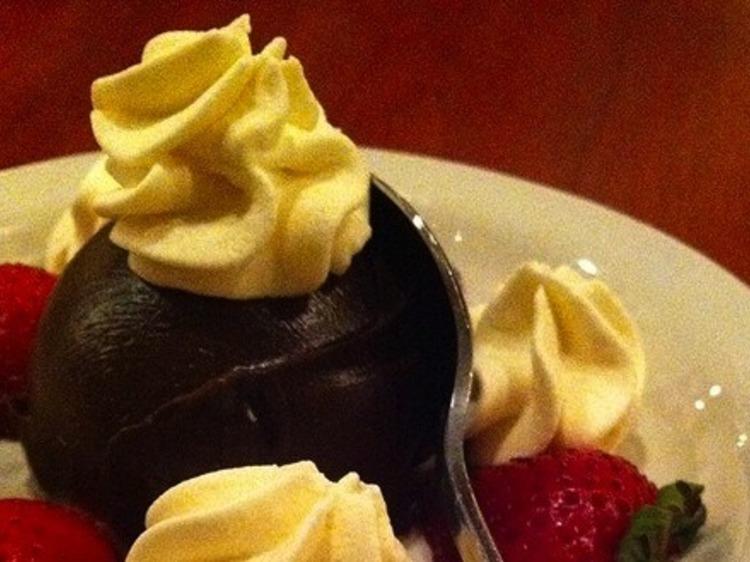 Quaint from the outside, a little more hip on the inside, La Ruche is a comfort zone for Francophiles who don’t want to drop a big wad of cash on their cuisine of choice. They gather here in swarms, making a buzz of conversation while waiting for chef Jean-Claude Cauderlier’s cooking. The food comes café-style, with a wide range of choices in the quiche/sandwich/salad range, plus a smattering of daily entrée specials such as mussels and duck à l’orange. Desserts, which include a range of traditional tarts, are made in-house. Brunch (10am-3pm weekends) is popular, especially in the garden when the weather’s good. 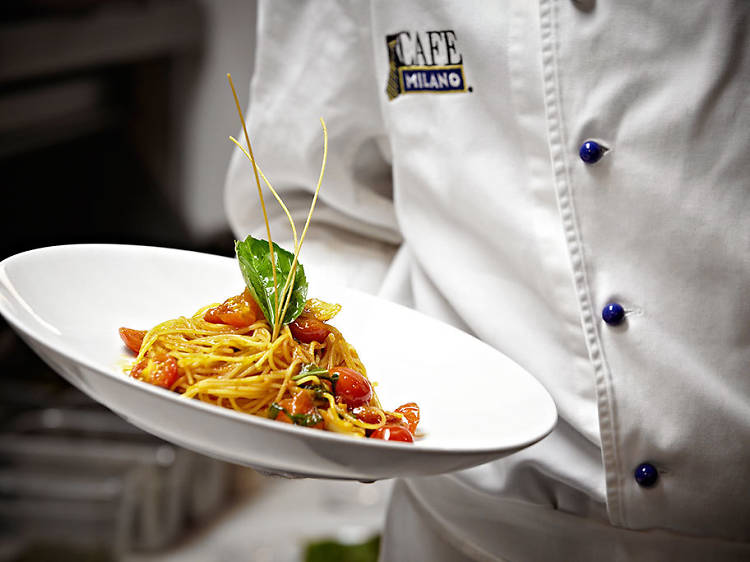 The crowd here is as much of an attraction as the food; you might spot Michael Jordan or a visiting movie star in this multi-room complex. Even the non-famous clientele are for the most part young, rich and glamorous. The menu—and the atmosphere—ranges from casual to chic; you can choose from a selection of pizzas and pastas, or opt for duck breast in Marsala wine or spaghetti with fresh clams. 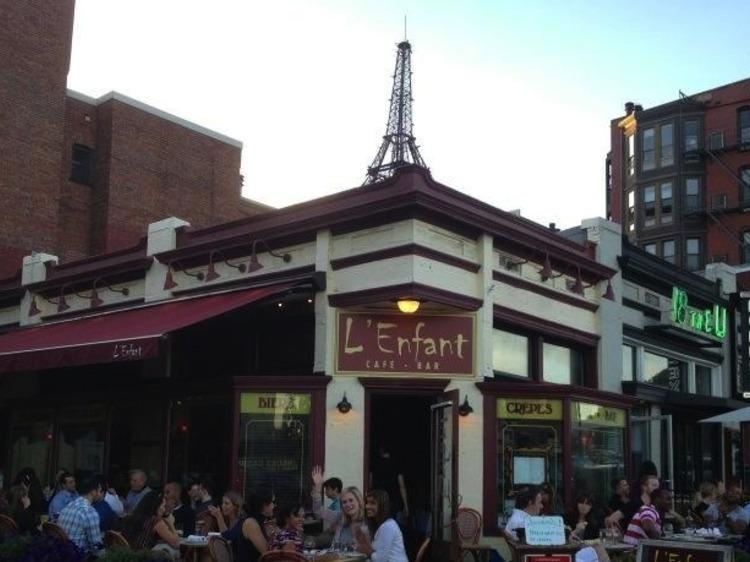 L’Enfant does its best to deliver decent French stalwarts, like boeuf bourguignon, at a reasonable price with reasonable speed. Dimly lit but welcoming and warm, it’s an ideal spot to spend a winter afternoon; in spring and summer, its outdoor patio gets lively. 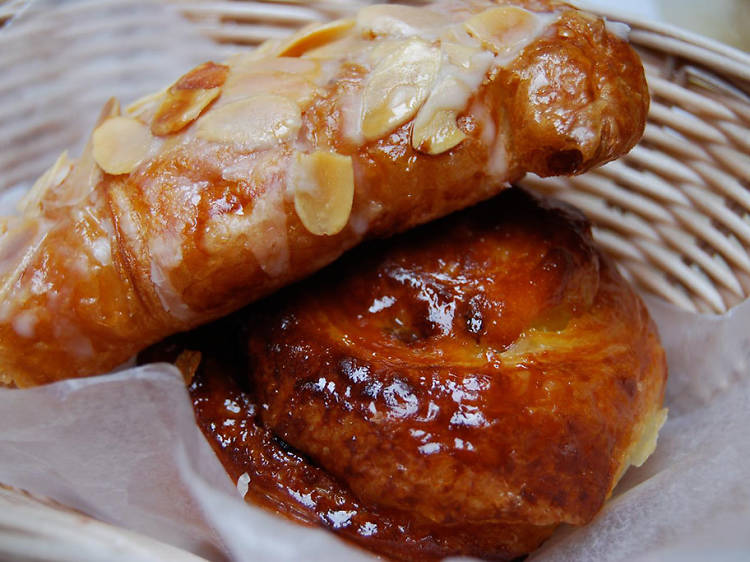 Light and airy in a modern European sort of way, Pâtisserie Poupon gets points for presentation and attitude. The tarts and cakes are just like you’d find in Paris, and the menu is short but oh-so-French: salade niçoise, crudités, quiches, baguettes and brioche sandwiches. All coffee drinks are made in the back at the espresso bar and delivered by the barista himself. 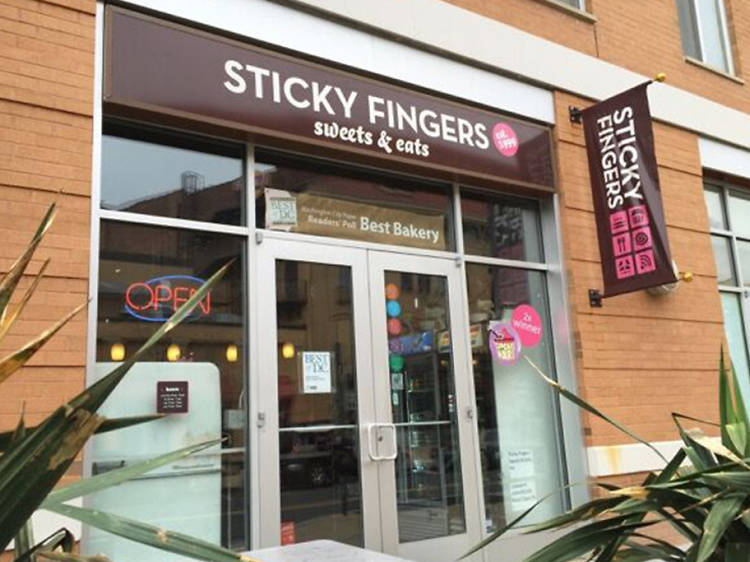 Best known as a bakery, with a well-loved range of top-quality cakes (cupcakes a specialty), pastries and cookies, Sticky Fingers also serves vegetarian sandwiches and other savories, among them a whole range of veggie burgers and a veggie chili dog. 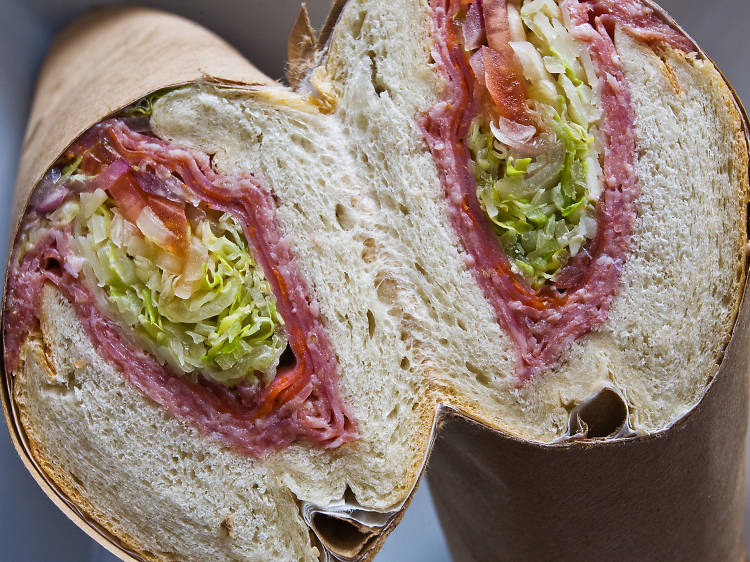 This mini chain of delis was started by two guys from Philadelphia, and it shows: the hoagies—high quality Italian-style ingredients piled high on thick, chewy rolls—are all named for streets in Philadelphia. There’s the Lombard Street, stacked with soppresata, salami, red peppers, pesto and mozzarella, for example, or the Lancaster Avenue—breaded eggplant topped with marinara sauce and sharp provolone. A side of fried risotto balls make a great—if heavy—accompaniment. If you’re less hungry, the arugula and pastina salads make a nice light lunch.Other locations throughout the city. 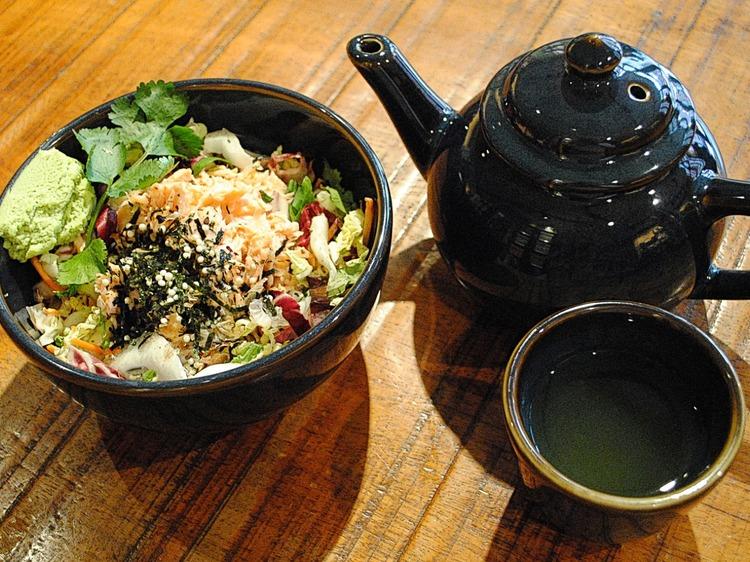 Freshly baked naan and Thai chicken curry are on offer at this café-style oasis from the bustle of urban living. Whether you stop off for a cup of chai or a bento box, you’ll feel ready to pound the pavement again. Afternoon tea with ginger scones and lime curd tartlets can be quite reviving in winter, or in warm weather, try the iced Moroccan mint tea; there’s nothing more refreshing. The spacious 8th Street branch, with its downstairs hideout, has a calmer vibe.Other locations: 800 Connecticut Avenue, NW, at H Street, Downtown (1-202 835 2233); and 400 8th Street, NW, at D Street, Penn Quarter (1-202 638 6010). 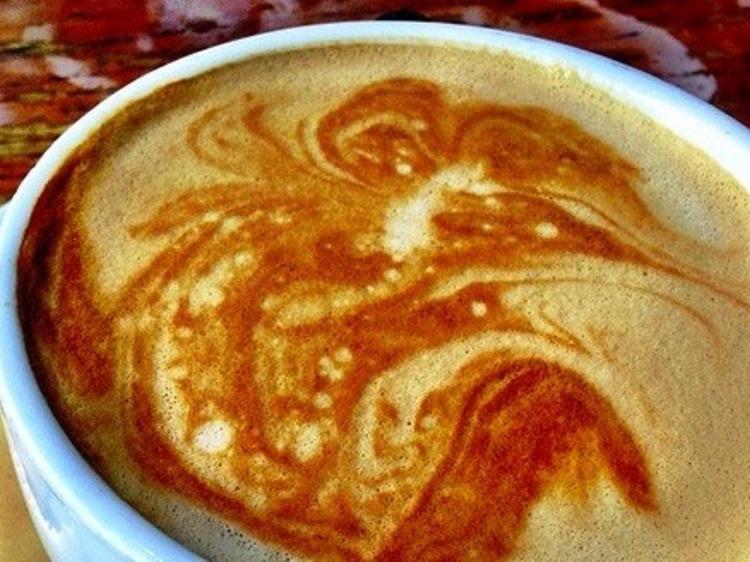 Not quite a club, a bar, or even a coffeehouse for that matter, Tryst makes a great community living room. Overstuffed chairs, comfy sofas and country-style kitchen tables—not to mention the free Wi-Fi access—create a hip, relaxed vibe without feeling collegiate. If you want to drink alcohol, fine. If not, the coffee, served in enormous mugs, is very good. There is also a range of sandwiches (half of which are vegetarian). Alternatively, you could create your own salad or order several small plates for nibbling. 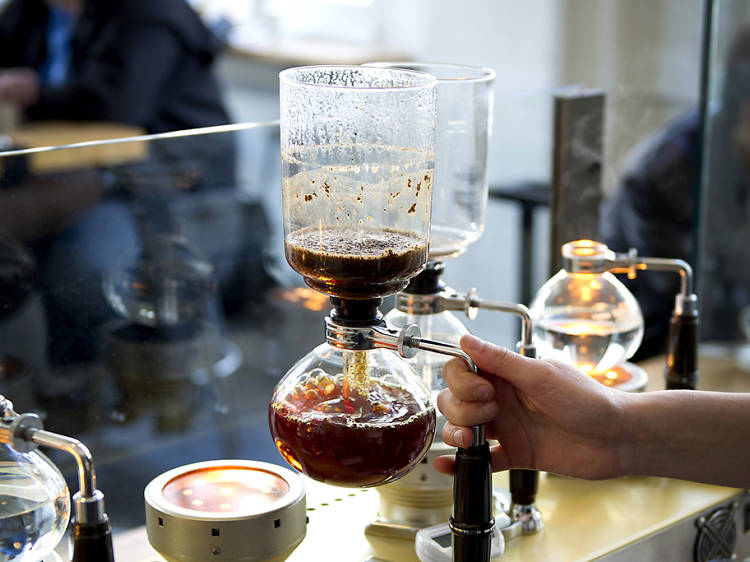 The best coffee shops in America