There were plenty of reasons to throw back a few drinks this year—some good, some bad, some celebratory (like Time Out Austin launching a magazine!). Thankfully, Austin has always been a city that's encouraged liquid therapy, offering everything from cocktail bars mixing up classics to hole-in-the-wall dive bars to wine bars where reds and whites are swirled and sipped. This year, we joined other Time Out cities in celebrating these tried-and-true spots with our very first Austin Bar Awards, honoring the bars and bar teams that make this city's cocktail scene so great. Our panel of experts helped hone the nominees, with the caveat that they couldn't nominate or vote for their own bar. The result? A who's-who of Austin's very best in the bar scene, newcomers and veterans alike. 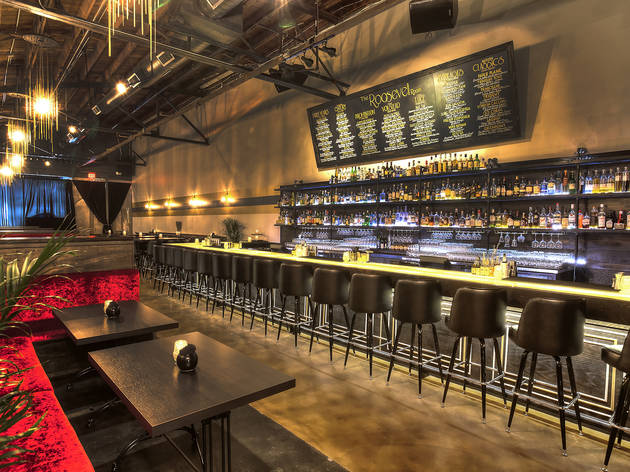 It's been an incredible couple of years for the Roosevelt Room since they opened in June 2015. The bar has become the go-to spot in Austin for imbibers who want a drink both classic and creative—and exceptional service to go along with it. Co-owners and operators Justin Lavenue and Dennis Gobis have meticulously trained their staff to know the origins of every single cocktail listed on the giant chalkboard above the bar, where drinks are categorized by era from Early Years (pre-1880) to Modern Classics (2000s-present). In addition, a signature cocktail menu consistently churns out some of the most creative drinks in the city, like the aromatic (and totally Instagram-worthy) Cigar Box (mescal, smoked black tea syrup, lavender bitters, tobacco bitters, flamed cinnamon stick). A recent revamp has given the space an updated, modern look, and the opening of their adjacent event space, The Eleanor, has established the Roosevelt Room as a bar that truly has it all. 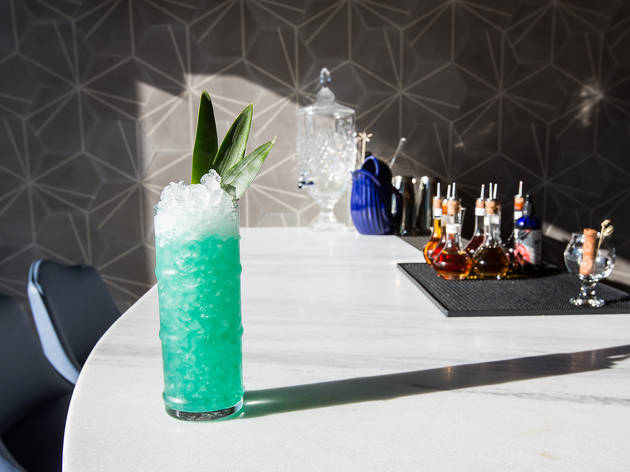 Aside from the fantastic bar program at Odd Duck just down the street, this stretch of South Lamar was desperately in need of a proper cocktail bar. Thankfully, Backbeat not only filled the need but surpassed expectations when it opened in March 2016. Step inside the midcentury modern space and you'll find creativity and talent in every cocktail—take, for example, the Takin' Carrot Business (Batavia Arrack, carrot, cinnamon, lemon and absinthe), which you can either enjoy inside or, in true Austin fashion, on a rooftop patio with views of our ever-changing skyline. Backbeat is the second project from husband and wife team Michael and Jessica Sanders, who also own drink.well. 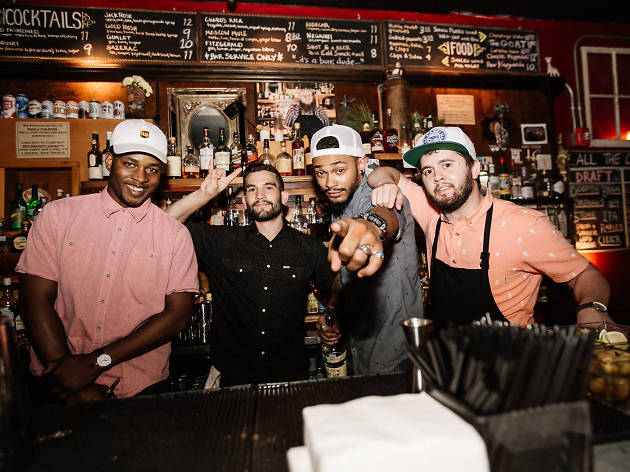 Firehouse Lounge is more than just a cocktail bar (and a popular one at that). It's a bar where other bartenders raise a glass before and after their shift, a place where adjacent hostel guests find friendly faces at the beginning of their night and, once they've stumbled back from their bar crawl, at the very end of it. Open the sliding door to the music-filled lounge and you'll find bartenders like Quincy Hammon, Paul Neuenschwander and Bradley Milton shaking and stirring—or warming up for bartender karaoke, a mainstay at the lounge. The team has faced plenty of challenges together, but they're a tight unit that makes even a Firehouse newcomer feel like family. As one of our panelists put it: "They're dope as fuck, yo." 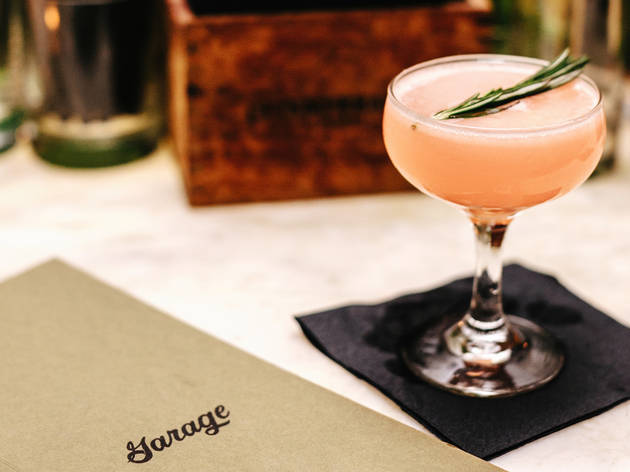 Tell anyone that you're going to a cocktail bar in a parking garage and you'd probably be met with an "Uh, is that safe?" Don't let the gray concrete façade fool you—the aptly named Garage is a cocktail bar that defies expectation. Designed by metalworker Mickie Spencer (East Side Showroom), the bar sports a raw concrete interior with soaring ceilings and structural columns lit solely by candles and the glow of a circular bar. A crisp neon sign comes from local artist Evan Voyles, and the menu itself—created by Chauncy James—pays further homage to the bar's physical origins, with sections like “custom” (Garage’s signature drinks), “vintage” (classic cocktails) and “refurbished” (modern takes on classics). 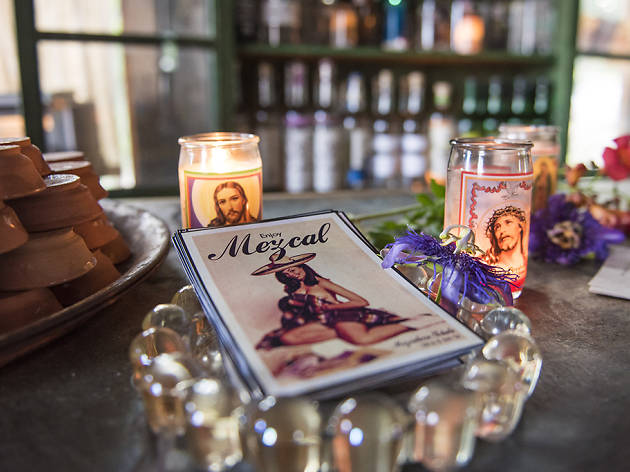 Above Whisler's in East Austin sits Mezcalería Tobalá, a speakeasy-style one room bar with a large selection of—you guessed it—mescal. The agave-based spirit flows like water here, with varietals that include Mexicano, Arroqueño, Tepextate and dozens more, but those who don't know much about the spirit shouldn't be intimidated. The bartenders are more than willing to educate the uninitiated, offering half pours in a clay copita to taste or a full pour if you've found your calling. Mezcalería Tobalá is proof that even a bar with a single, concentrated focus can provide a new experience every time. 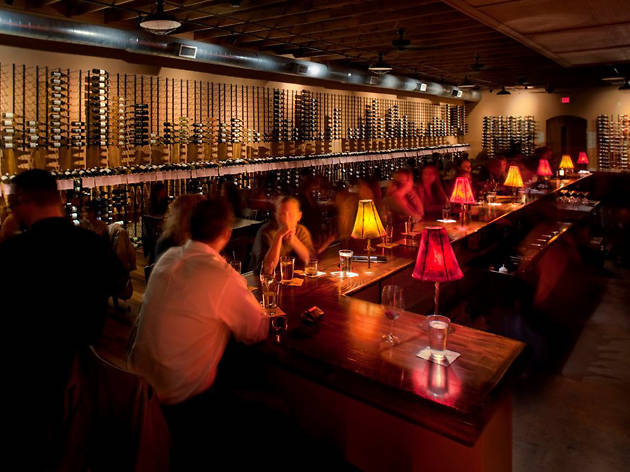 Vino Vino must be doing something right—for over ten years, they’ve been wooing Hyde Park residents with bottles of exquisite reds, whites and everything in between. Patrons can tuck away into a cozy lamplit table and select a bottle from the epic wall of wine, which favors the Old World, particularly Italy and France. The menu spans from classic snacks like raclette to full-fledged entrees like bouillabaisse, and there is an all-day and -night happy hour every Sunday and Monday—think $5 wines, $5 cocktails and special prices on burgers and apps. 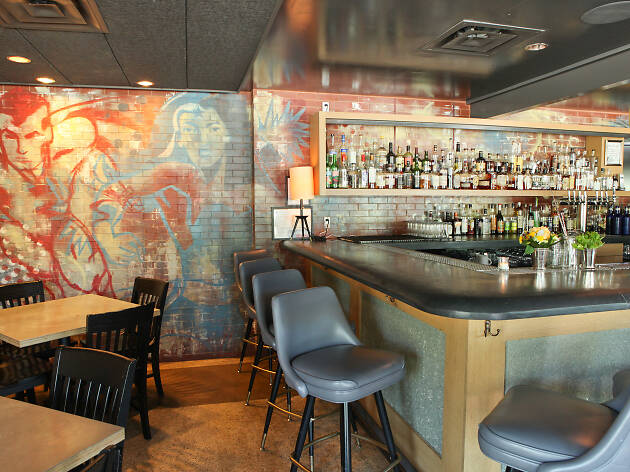 What makes a creative drink list? Innovation, cocktails that land squarely outside the box and, sometimes, a healthy dose of shtick. The rotating cocktail menu at drink.well. encompasses all of these qualities at some point or another. Owned by Michael and Jessica Sanders, drink.well. is a neighborhood bar that continuosly pushes the envelope with their inspired cocktails. Take the Churn and Burn, for example, an unexpected blend of Del Maguey Vida mescal, Lustau amontillado (Spanish sherry), Angostura bitters, wildflower honey, lemon and apple butter. Or their Stranger Things-themed menu, featuring drinks like the Fireball or Protection (a nod to Dungeons & Dragons). Their tiki drinks are always on point—elaborate garnishes and all. 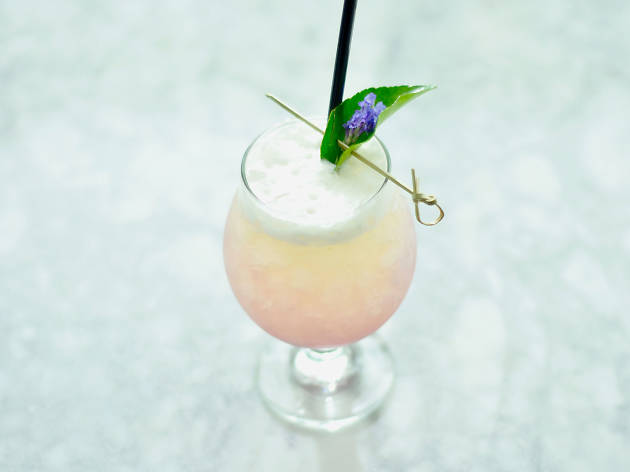 Sometimes a great restaurant is made even better with a fantastic bar program. Such is the case at VOX Table, a New-American style restaurant located in the Lamar Union community complex in South Austin. If you've come here for the food—chef-crafted small plates that highlight farm-to-table ingredients—you'd be wise to order a drink, too. Beverage director Madelyn Kay has concocted gems like the Day Three of Your Juice Cleanse, a dreamy cocktail made with, among other ingredients, butterfly pea flower, which gives the summer-y drink an ombré effect. 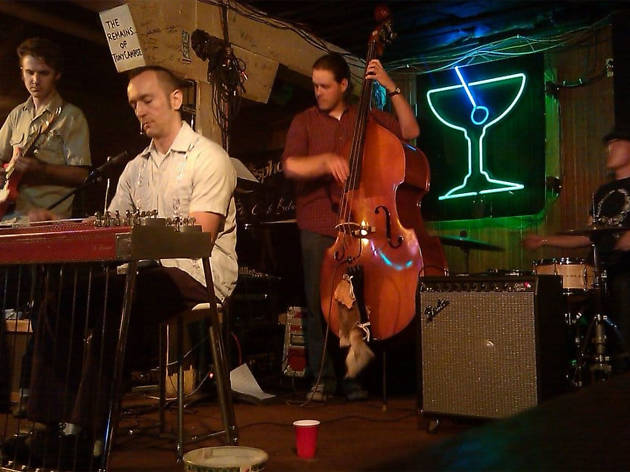 There's no shortage of live music bars in Austin, but Elephant Room seems to harken back to a simpler time, its dimly lit basement layout providing just the right amount of mystique and ambiance while still providing the vibe of a laidback watering hole. Here, jazz fanatics can get lost in nightly performances (often without a cover) and classic cocktails, tapping their feet to sets from the likes of Jon Blondell and Elias Haslanger while sipping on a smooth old-fashioned.