Do you know the oldest castle in Alt Penedès? Have you ever walked along the banks of the Foix River? Would you like to find out about an 18th century country house dedicated to wine and cava production? Read on and get the most out of 48 hours in the Catalan wine region par excellence. 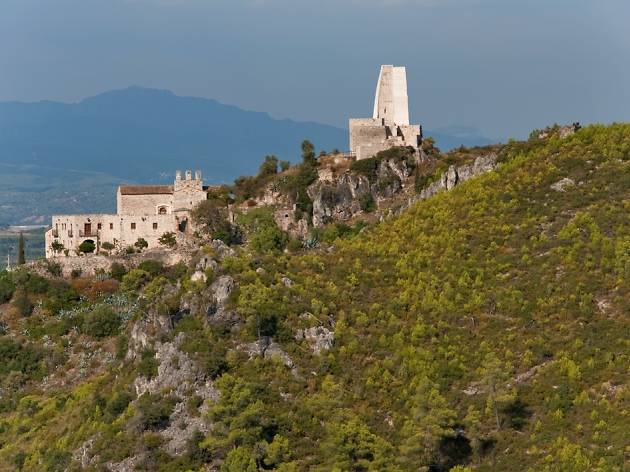 Upon arriving in the region, we go up to Subirats Castle, an excellent viewpoint to get an idea of what surrounds us and the many vineyards in the municipal area of Subirats.

We have references to the castle dating back to the year 917 and it was the first construction of these characteristics in the region. The master or homage tower stands proud before the visitor marking the highest point of the building. Partially rebuilt ‒ the castle suffered its biggest destruction in the 17th century, during the War of Els Segadors ‒, inside we will find some surprises, such as a stone from the Via Augusta around 2,000 years old that was converted into a sarcophagus. It is in the so-called Millennium Hall. The castle museum, opened four years ago, displays other interesting pieces, such as coins, old bells or the stretchers used for hundreds of years to carry the deceased of the nearby country houses along the path of El Ordal to the church of Sant Pere de Subirats.

This former church of Sant Pere has been the shrine of the Virgin of la Fontsanta since 1726 and is located on a lower level of the fortress. It is also worth visiting. It has a single nave ground floor, with side chapels and a semicircular apse partly carved out of the rock. 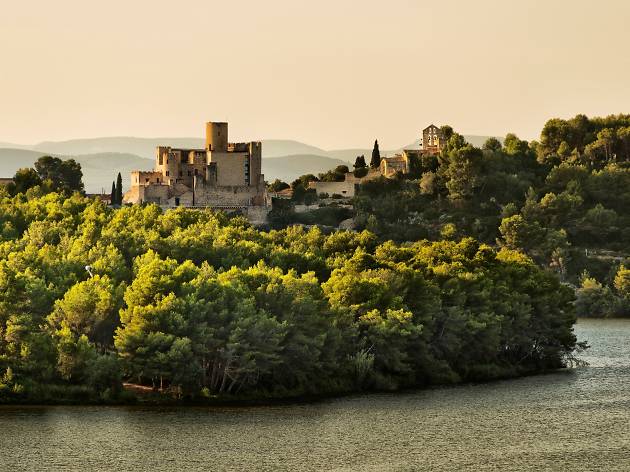 We have the whole of the second day to enjoy the region of Penedès. We think it is worth discovering the path of the Foix River, a route that follows the banks of this short river that crosses Alt Penedès and that you can combine with the Joc del Foix, a game available online that consists of solving questions and riddles that emerge throughout the route. As you can imagine, it is ideal if you have kids with you. Moreover, if you buy the game you have a free meal in a restaurant in Sant Martí Sarroca and a visit to a winery.

You can start the route wherever you like and do part or all of it (in the second case, you will probably need more than one day). As we were in Subirats yesterday, we should mention that if you are still there today the stretch of the river path that goes through the town is the best way to discover its different population centres and explore the vine crops, forest and shore area. 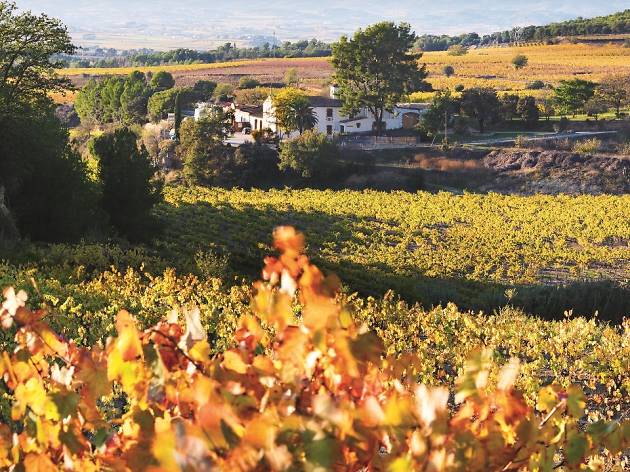 To finish off this weekend in Penedès, there is nothing better than a visit to a winery to discover how they make the great treasure of these lands. So we are going to Sant Pau d'Ordal ‒ also within the municipal area of Subirats ‒ to visit the winery and estate of Eudald Massana Noya. The history of the country house dates back to the 18th century and nine generations have already been its custodians. In the 30 hectares of vineyards, ten grape varieties are grown to produce wine and cava, while always respecting the biological and ecological balance of the area.

The winery organises a wide range of activities around the vine, such as a walk through the estate for people starting out in the world of wine or other walks that explore the work of the vineyard and winery, technical visits or grape tasting. There is also a more traditional visit consisting of a tour of the facilities to explain the production of wine and cava including a final wine tasting. In short, there is nothing better than enjoying the essence of Alt Penedès to round off your trip. 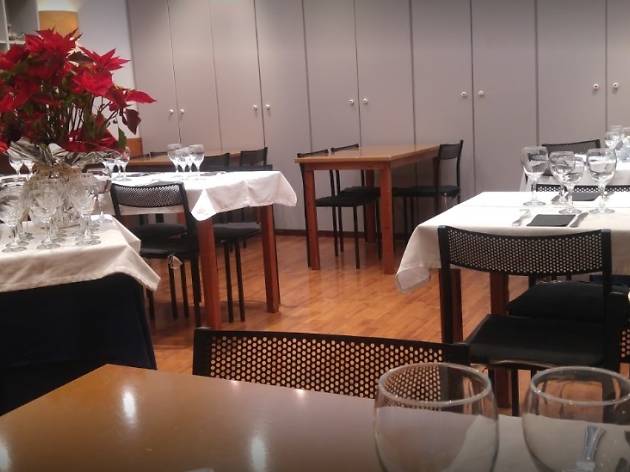 Dishes based on Penedès cuisine. Great for the Muscovy duck, 'gall negre' (black-plumed cock) and guineafowl, for example. It has spent 17 years building its reputation through its sheer hard work, not only because of the quality of its dishes but also the attentive service from the staff. A nice cosy restaurant. 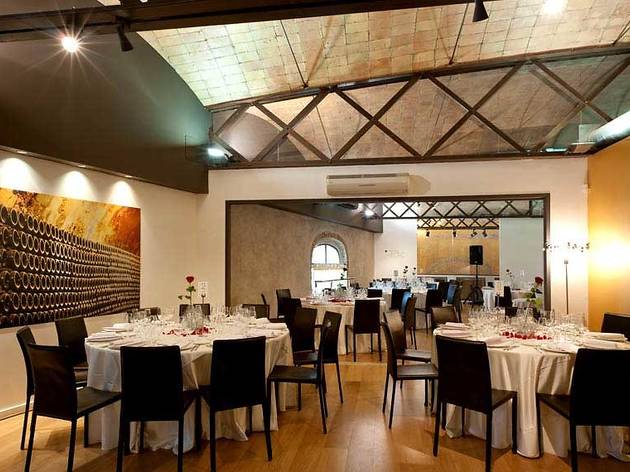 With 30 years devoted to food, Cal Blai Vinticinc knows that cava is part of its essence and pays special attention to it both in its dishes and in its wine list. You’ll be licking your fingers after trying stuffed mute duck but also after a McBlay burger or a dish of fried eggs with potatoes, truffles and foie gras. One of its virtues is that you can choose from several menus, depending on whether you feel more like a snack or a larger dish. 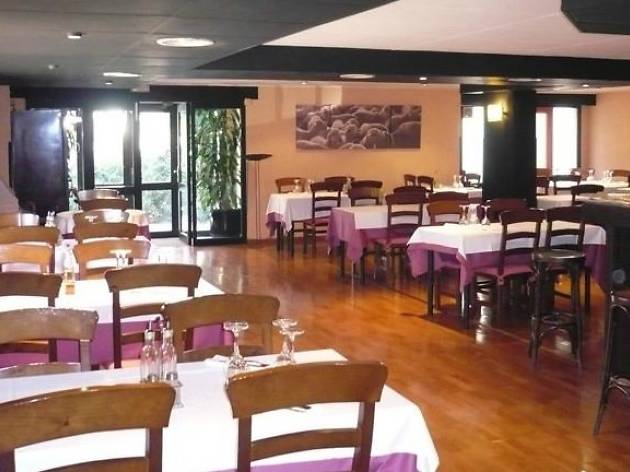 Spacious tables and attentive staff await you in this restaurant located in the Alt Penedès capital. It serves a wide range of dishes, including escargots 'a la llauna', 'arròs caldós' (seafood rice in broth) and duck magret with berry sauce and, for dessert, a delicious 'crema catalana' (custard). Good value and quality set menus. 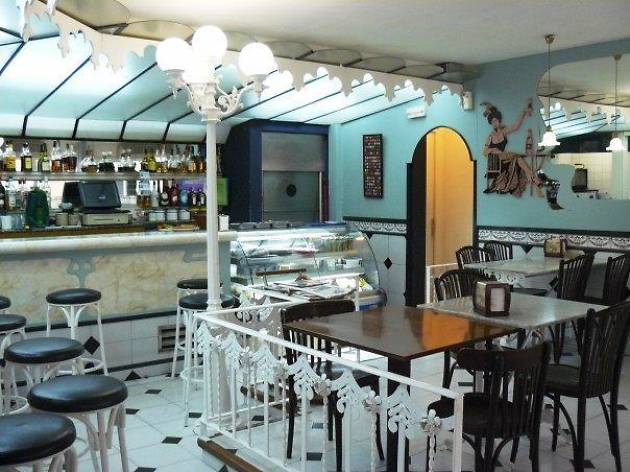 An emblematic family restaurant in the centre of Vilafranca, opened over four decades ago. It retains part of the old decor and is renowned for its breakfasts. Many locals choose it for the first meal of the day but it also serves lunch ‒ with good value set menus ‒ and dinner most days. Homemade food. 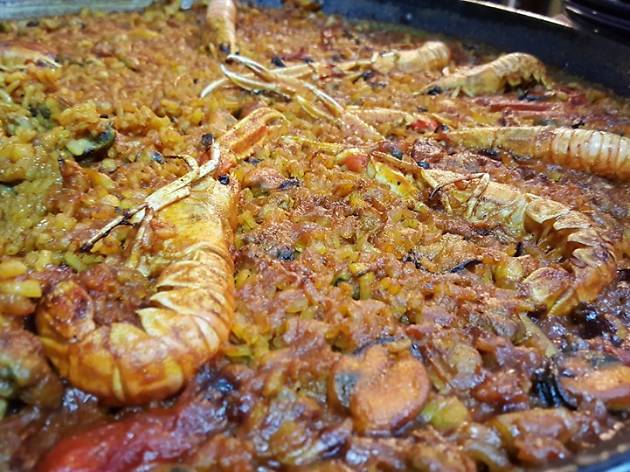 In an informal and colourful setting, Cal Diari is a restaurant serving Catalan and local cuisine and is ideal for families with children. Perhaps the most popular is the cannelloni but other dishes are also excellent; we recommend the duck magret with mango. The beautiful views, with Sant Martí Castle on the horizon, is an added bonus. 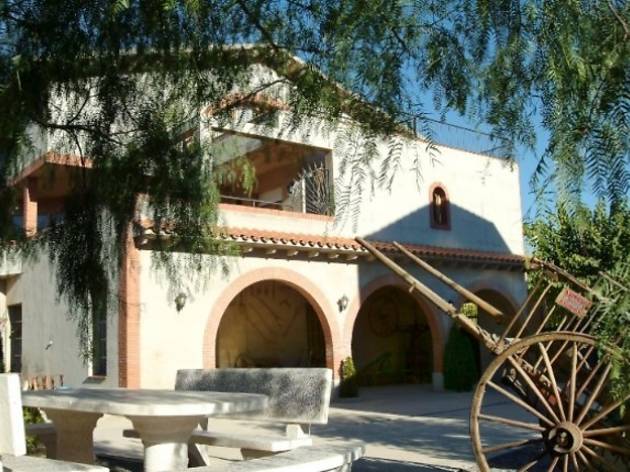 In the heart of the Penedès, you'll find Cal Jeroni, a with rooms equipped with private bathroom, and Ca Siona, a restored cottage that can be rented for up to six people. Both places are in Cantallops, near Avinyonet del Penedès, which is a great base for exploring the surrounding area, where you can take bicycle tours through the vineyards or visit the peach orchards in Ordal. 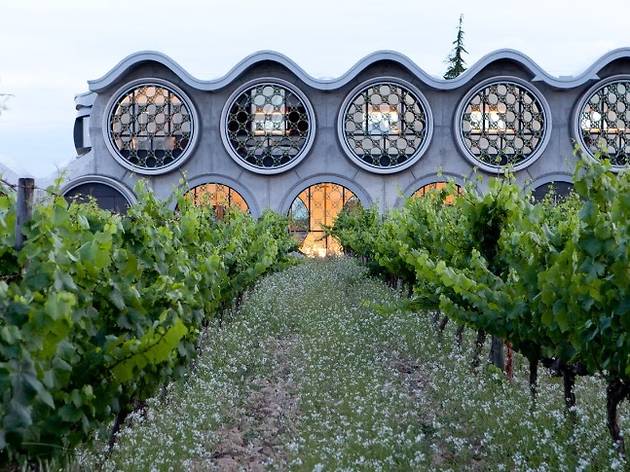 This five star hotel with spacious, well kept rooms will give a touch of elegance to your visit to the Alt Penedès region. If you like architecture you will find a building design inspired by Gaudi's work that is well integrated in the environment. You can also visit their cellars, since the farm produces both wine and champagne, and enjoy fabulous views of the vineyards. The restaurant is also highly recommended. 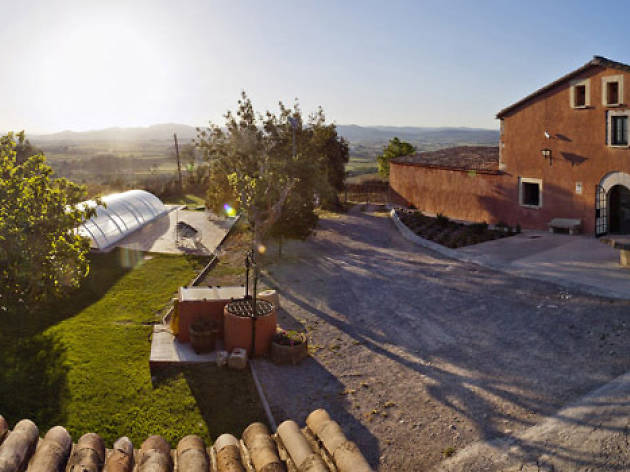 Mas Pigot is a country house located ten kilometres from Vilafranca del Penedès on top of a small hill, giving it some exceptional panoramic views of the surroundings. The house is well equipped with all kinds of facilities to spend a few days; for example, the swimming pool is covered in cold seasons and almost all the rooms have their own bathroom. It can accommodate up to 15 people. 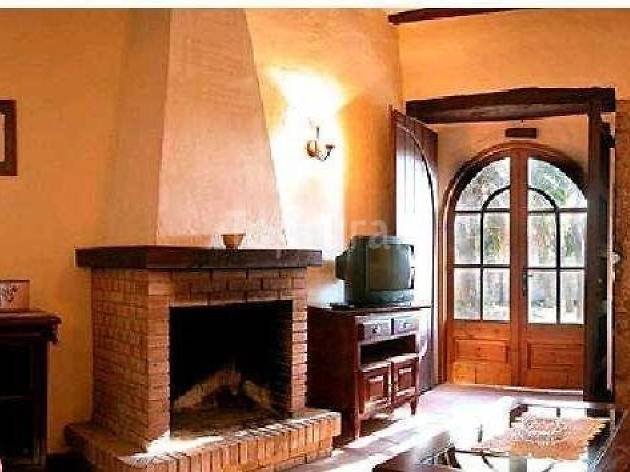 Large 18th century house on the outskirts of Font Rubí for up to 15 people in its four independent apartments. It can be hired complete or by apartment. Nestling amidst centenary trees and vineyards, all guests have access to the garden with swimming pool and barbecue. Nearby there are plenty of activities available to get to know the area: wine tourism, routes on horseback, bike rental... 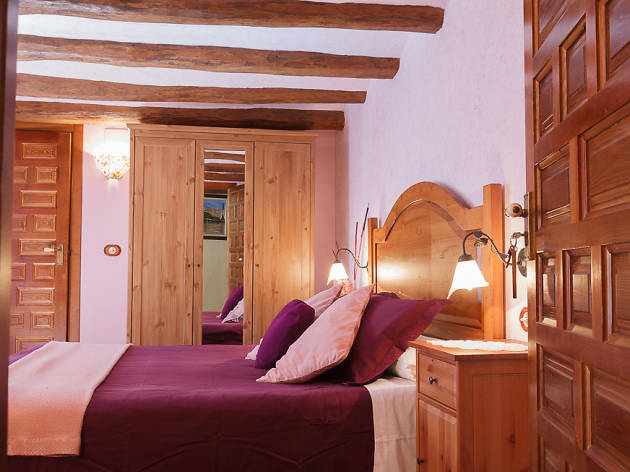 El Molí de Pontons is a small country hotel located in the centre of the village of Pontons in Alt Penedès and is ideal for couples. It offers elegant suites with a romantic atmosphere, equipped with Jacuzzi spas, and guests can enjoy a variety of spa treatments and massages. The hotel also has an outbuilding with apartments for four to six guests each. The hotel restaurant is recommended and serves good seafood. 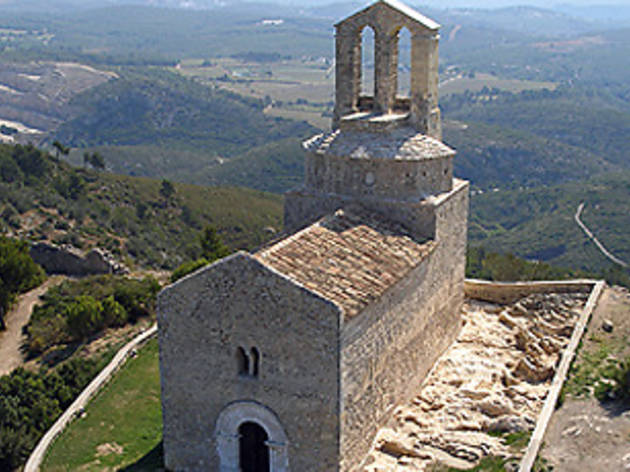 The mountain of Olèrdola has been a strategic enclave with different degrees of settlement since the Bronze Age (a little over 4,000 years ago). You can visit both the archaeological site and the interpretation centre, which stands in a modern building. The museum offers visitors guided and dramatized visits that allow you to discover, among other things, anthropomorphic tombs and the Medieval city, which was when the castle and the walled city were built. 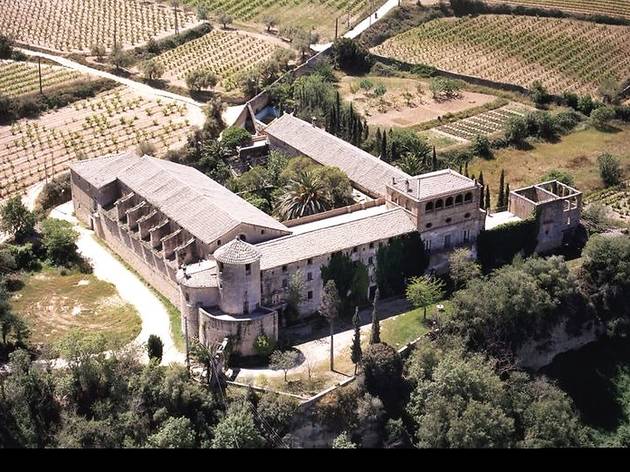 This is actually a group of buildings made up of the former fortified Penyafort manor, a convent and a church. The castle was built around the eleventh century. Tradition says it is the birth place of San Ramon Penyafort (1185 - 1275), a Dominican monk and canon lawyer and councilor to King Jaume I, who was canonized in 1601. Guided tours are conducted on the second Sunday of every month, for which preregistration is required. The castle is also the start of the visit to bomb shelters route, which take place on the fourth Sunday of each month, since this site is also part of a group of exhibition spaces related to aviation and the Spanish Civil War. 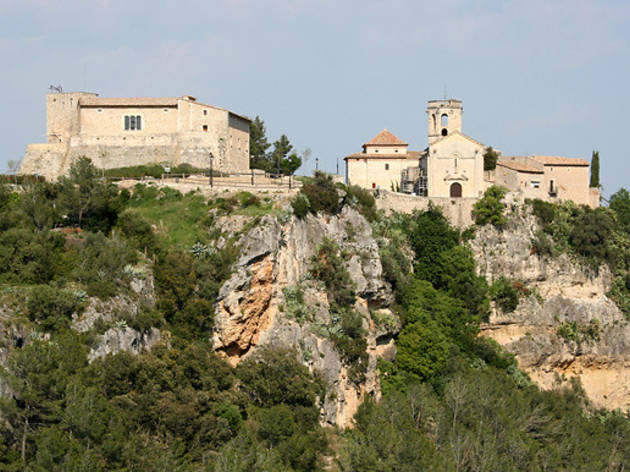 Also known as the Conjunt monumental de la Roca, this complex of buildings includes the Romanesque church of Santa Maria, dating from the 12th century, the Castell de Sant Martí, which was built in the 10th century, and the museum, which houses a number of archeological and ethnographical collections that include an Iberian funerary monument (3rd – 2nd century BC), a woman’s head in stone (1st century BC) known as the Venus of Pendedès, Roman tombstones and a 15th century Moorish soup bowl from Manisses, a piece that is decorated both on the inside and outside and which is considered to be a unique piece, discovered during the restoration of the church. 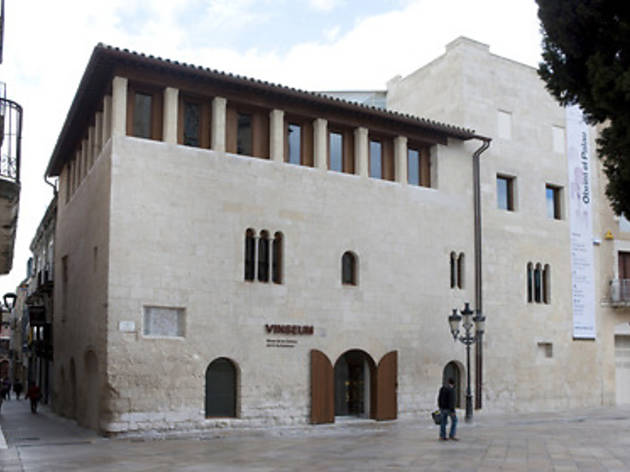 Vilafranca’s wine museum has an extraordinary collection of diverse items relating to the history of wine making. These 17,000 items are fundamental to reaching a complete understanding of a territory that has always been marked by wine and vines. The museum’s different exhibitions and audiovisual presentations will help you to understand how wine is made and its historical and economic impact on the territory. 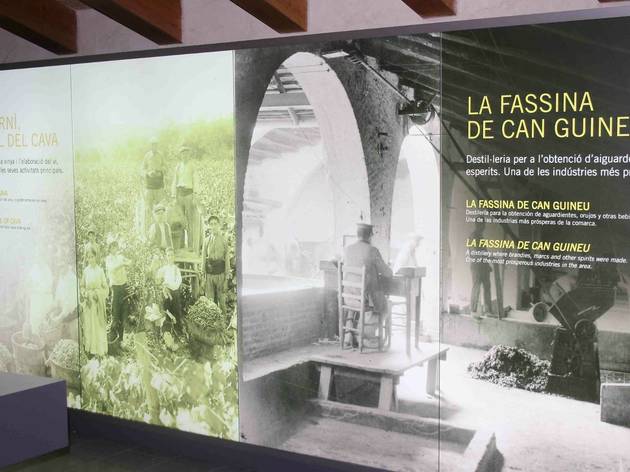 Located in a distillery dating from 1814, the Cava Interpretation Centre consists of 1,200 square metres that allow you to explore the world of cava from its origins and history to the manufacturing process and its role in culture and in celebrations. On your visit you’ll enjoy Sant Sadurní d'Anoia in 3D, get to know the towns architectural heritage in an interactive way and experience the phylloxera festival in large format, among other proposals.