How to navigate public transport in Barcelona

Find out how to navigate Barcelona’s public transport system, including city buses, the metro system, trams and trains

Although it’s run by different organisations, Barcelona’s public transport is now highly integrated, with units on multi-journey tickets valid for up to four changes of transport (within 75 minutes) on bus, tram, local train and metro lines. The metro is generally the quickest and easiest way of getting around the city. All metro lines operate from 5am to midnight Monday to Thursday and public holidays; 5am to 2am Friday; and non-stop on Saturday, closing at midnight on Sunday. There are night buses that run all night to areas not covered by the metro system.

The metro map is divided into zones, and the farther the zone is from the centre of the city, the more expensive the journey.

Local buses and the metro are run by the city transport authority (TMB). Two underground lines connect with the metro, run by Catalan government railways, the FGC. One runs north from Plaça Catalunya; the other west from Plaça d’Espanya to Cornellà. There are six tramlines following two main routes, though they are of limited use to visitors.

TMB information
Main vestibule, Metro Universitat, Eixample (93 318 70 74/www.tmb.cat)
Open Mon-Fri 8am-8pm.
Other locations Vestibule, Metro Sants Estació, Metro La Sagrera, Metro Diagonal. Journeys in the Barcelona urban area have a flat fare of €2.15, but multi-journey tickets (targetes/tarjetas) are better value. The basic ten-trip targeta is the T-Casual (€11.35), which is valid for one individual travelling within Barcelona; the ticket is validated in the machines on the metro, train or bus once per journey.

Along with the other integrated targetes listed below, the T-Casual offers access to all five of the city’s main transport systems (local RENFE and FGC trains within the main metropolitan area, the metro, the tram and buses). To transfer, insert your card into a machine a second time; unless 75 minutes have elapsed since your last journey, no other unit will be deducted. Single tickets do not allow free transfers.

You can buy a T-Casual pass in newsagents, as well as on the metro, train and bus systems (from machines or the ticket office), but not at airport metro stations. More expensive versions of all targetes take you to the outer zones of the metropolitan region, but the prices listed below will get you anywhere in central Barcelona, and to the key sights on the outskirts of the city itself.

Many bus routes originate in or pass through Plaça Catalunya, Plaça Universitat and Plaça Urquinaona. However, they often run along parallel streets due to the city’s one-way system. Not all stops are marked, and street signs are not always easy to locate.

Most routes run 6am-10.30pm daily except Sundays. There’s usually a bus every 10 to 15 minutes, but they’re less frequent before 8am, after 9pm and on Saturdays. On Sundays, buses are less frequent still, and a few do not run at all. Only single tickets can be bought from the driver; if you have a targeta, insert it into the machine behind the driver as you board.

Most of the urban night bus routes run from around 10.40pm-11.40pm to 5am-6am nightly, with buses every 20 to 30 minutes. All depart from or pass through Plaça Catalunya. Fares and targetes are as for daytime buses. Plaça Catalunya is also the terminus for all-night bus services linking Barcelona with more distant parts of its metropolitan area.

All trains on the RENFE local network (‘Rodalies/Cercanías’) stop at Sants but can also be caught at either Plaça Catalunya and Arc de Triomf (for Vic and the Pyrenees, Manresa, the Penedès and Costa del Maresme) or Passeig de Gràcia (for the southern coastal line to Sitges and the Girona-Figueres line north). The metro is the easiest way to get around Barcelona. There are eight lines, each colour-coded:

Lines T1, T2 and T3 go from Plaça Francesc Macià, Zona Alta, to the outskirts of the city. The fourth line is more useful to visitors and runs from Ciutadella-Vila Olímpica (also a metro stop), via Glòries and the Fòrum, on to Sant Adrià (also a RENFE train station). The fifth line follows the same route, splitting off at Glòries to go on to Badalona.

All trams are fully accessible for wheelchair users and are part of the integrated TMB targeta system. You can buy integrated tickets and single tickets from the machines at tram stops. 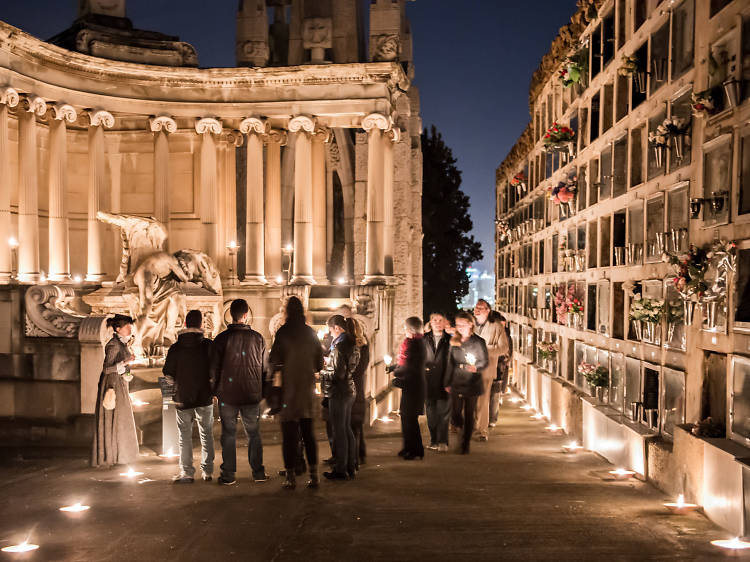 21 of the best alternative Barcelona tours

Get off the trains and buses and get out exploring Barcelona. Walking, cycling or running your way round with a group is a great way really get to know the Catalan capital. Our pick of the best alternative tours in Barcelona packs in all the essential things to do here – a stroll down La Rambla, a quick stop at the Sagrada Família – but also some routes that’ll take you past the traps and off the beaten path, all with the help and direction of knowledgeable guides primed for questions and armed with answers.