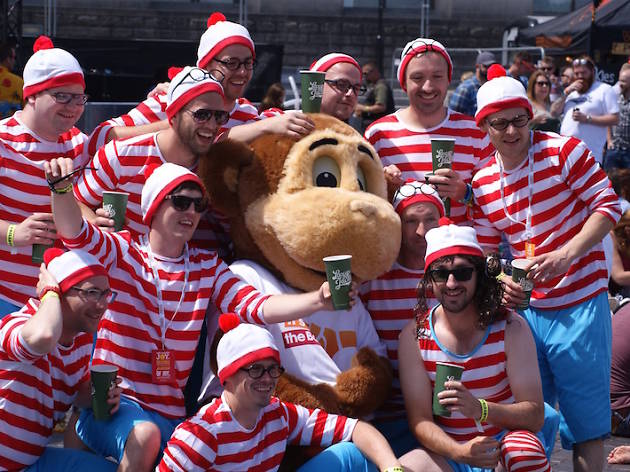 Anyone in the vicinity of Bristol's floating harbour last weekend couldn't have failed to notice that Grillstock Festival was in town. Even those across the river likely found their mouths watering as the smell of expertly barbecued meats wafted out from Canon's Marsh.

Over the course of the two-day festival, more than a dozen teams from across the UK competed in the hotly contested King of the Grill competition. This year the Backyard Brummies picked up the Jack Daniels Chef's Choice and Best Burger awards, Clifton Smoke won Best Hot Wings and Priscilla Queen of the Firepit picked up the prize for Best Ribs and reserve Grand Champion.

However, the hands-down winners of the weekend was Mc Slims BBQ, who not only won the Best Brisket and Best Pulled Pork categories but also emerged victorious as the 2015 King of the Grill Grand Champions.

While things were smoking on the barbecues, the happenings on the stage were hot too. And we don't just mean the chilli eating and hot wing eating competitions. The weekend saw great performances from the likes of The Computers, Goldie Lookin' Chain, DJ Yoda, The Heavy and Bare Knuckle Parade. And, not forgetting, some interesting crowd interaction from alternative hip-hop legends De La Soul.

Flick through the slideshow above for a bunch of images from this year's event - and if you missed out but are still hoping to get your fix of music, meat and mayhem, fear not; the festival will be making one last appearance this year, in London, on September 5-6.

If all this talk of barbecues has got you hungry, here's some of our favourite burger joints in Bristol.

Shaun used to write about gadgets, then games, then cars. Now he turns his hand to just about anything. He is Time Out's Community Manager for Bristol, Birmingham and Leeds. Follow him on Twitter @shaun_curnow