All hail Awkwafina, the Queen of Queens

The night before we sit down with Nora Lum—a.k.a. Awkwafina—she was scalding eyeballs at the annual Met Gala in a million-watt gold dress by Joseph Altuzarra. “A couple of people on Instagram compared it to a Ferrero Rocher wrapper,” she recalls with her throaty laugh. “I don’t mind because that’s very luxurious.” In an obvious sense, Awkwafina has arrived. Only last summer, her character was heisting the Met Gala in Ocean’s Eight, but the Queens-raised comedian and rapper still felt like a bit of an interloper alongside her A-list castmates. Then came Crazy Rich Asians, a breakout blockbuster that she sums up as a “movement” for onscreen representation. The revolution continues with her forthcoming The Farewell, a Sundance stunner that sees her headlining an all-Chinese cast in a drama about family disconnection, grief and immigrant blues.

It’s the first warm day of 2019. The windows of this Hudson Yards loft are flung open. Awkwafina—former class clown, junior-high trumpet star and rude celebrator of her own anatomy (check out “My Vag”)—curls up on a chair with her Juul and cuts loose.

Can you turn off Awkwafina? Do people ever call you Nora?
My friends do. You can call me Nora.

Thank you. Where does Awkwafina come from?
I think I channel her to gain confidence in situations where I’m insecure. Awkwafina is what I present to the world, and Nora is who I go home to.

Was her creation a defense tactic?
Literally, it was: In my first video, I wanted to be anonymous. That’s why I wore glasses, which was really stupid because I got fired from my job because of it anyway. Awkwafina, she came into existence when I was 15, 16 years old. So she is a part of me. You want to appear strong, you want to set a good example about loving yourself. But the truth is, sometimes, you don’t. Sometimes you question everything, and that’s very real as well.

Was it weird for you to start seeing your stage name on billboards?
The first time that name was really put on something crazy was Ocean’s Eight. You’re reading all these credits, and then you come across mine: What the hell was that? People were incensed about it on Reddit. It stuck out like a sore thumb. But without the Awkwafina, I felt like something would be lost. And I’m not ready to lose her yet.

Now that you’re in the limelight, does being a New Yorker help you stay sane?
Being a New Yorker grounds you in every way. Before you walk out of the house, you can dress in the nicest clothes and be whoever you think you are, but when you’re on those streets, you’re just in the school of fish. 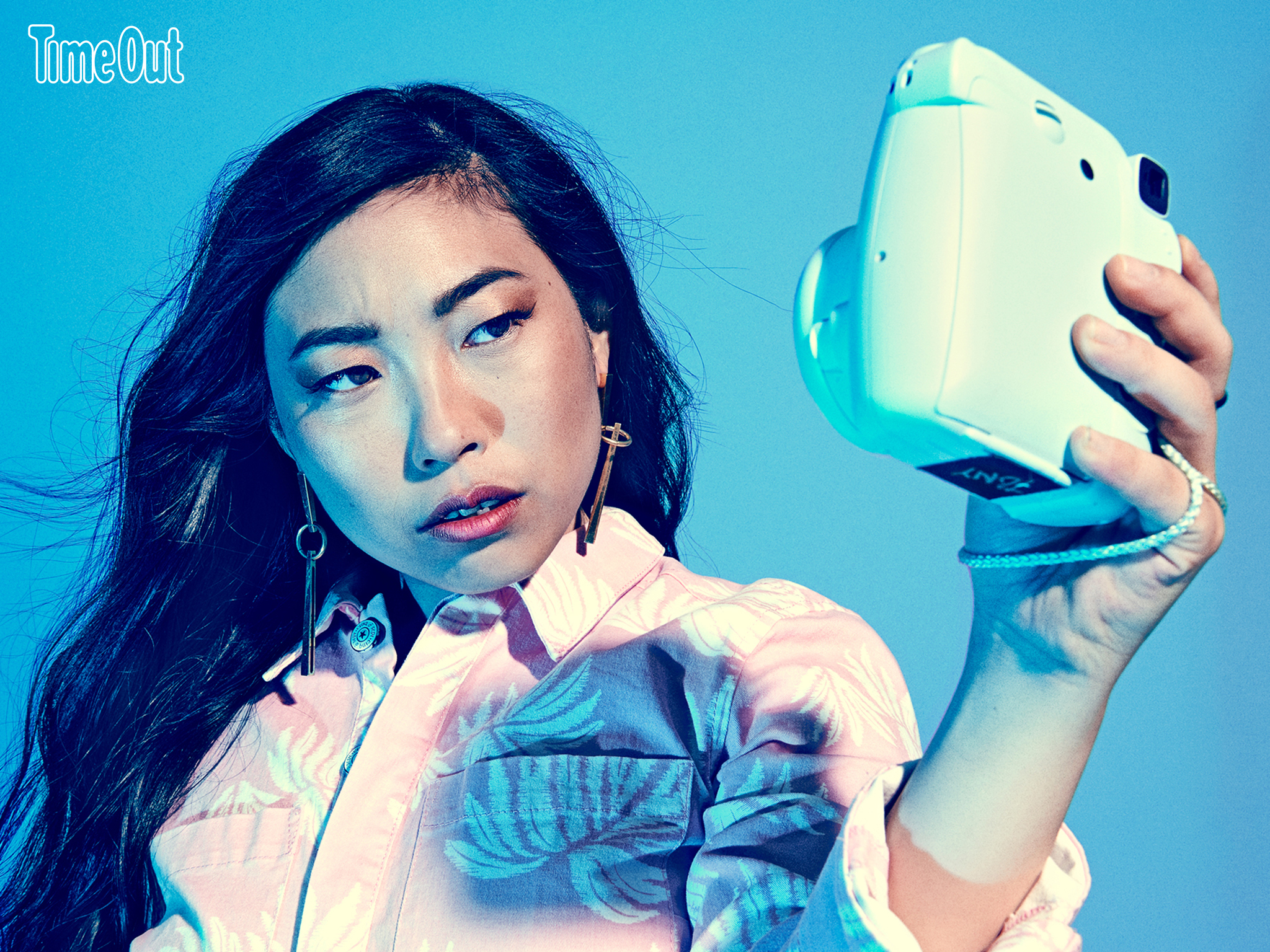 That’s what your raps are about: authenticity.
For sure. I rap about what I know, always. I bet you’re referring to “NYC Bitche$,” which I wrote in 20 minutes. There was so much I wanted to say at the time because the New York around me was changing. I was going from being a teenager who took the train to LaGuardia High School every morning to being a young adult who wanted to live a life but felt like the city wasn’t hers.

Politics, economic disparity, the changing complexion of the city—that’s always been central to what you do.
On the subway, on the street, everything has the potential to be political. You have the elite that live on Billionaires’ Row and then you have the people that are just trying to get by. You always have to be aware of that. I don’t want to be one of those 85-year-old New Yorkers on her stoop, wearing a muumuu, talking about how much it’s changed. But it’s good to be aware of where it’s changing from and what it’s changing to.

I would love to know what kind of a student you were. Were you popular?
Maybe my problem was I was a little too popular, because I was not good at school. I was the best trumpet player in my junior high. But when I got to LaGuardia, I was, like, 80th in the city. So for music, I really had to find my own way. What LaGuardia did for me was allow me to travel into the city every day. To get out of town and explore different neighborhoods.

So that was your awakening. But your grades suffered?
I was such a bad student, my dad had a parent-teacher conference and my teacher told him, “For some people, the best thing that will ever happen to them is getting into LaGuardia.” And I remember it resonated with me. What happens after this? Am I just in the orchestra pit for The Lion King? Where do I go? That road led me here.

Crazy Rich Asians was definitely about reclaiming territory.
When Crazy Rich Asians came along, I told my team: “I know this is going to be important. I don’t care if they cast me in it—the fact that it’s happening at all is important.” I made it a point to tell them that. And I got the part because of that.

Did you have a hunch about its huge success?
We had a gut feeling. I would see these kids crying, coming out of screenings. You don’t realize the power of representation until you feel it and you know you’ve been missing it.

Growing up, do you wish you’d had a film like that?
I do. And I want the kids of the future to be spoiled with representation and to wonder why Crazy Rich Asians was such a big deal. I want them to have that representation everywhere.

Instead of having that representation for yourself, you had NYC’s dearly departed Evergreen Video, a trove of foreign cinema, where you worked as a clerk.
I did. I watched the entire Criterion Collection. It was film school, man. That’s how I discovered Asian-American indies—we had a whole section for them.

Oh, I remember. I rented from there.
No way! We had old VHS tapes. Do you remember an Asian girl there? That was me.

Did you always think you’d move to dramatic indies like The Farewell?
It wasn’t that I wanted a foray into drama. It was this script—I’d never seen something like it, both as an actress and as an Asian-American.

Your character, Billi, is a mixed-up New Yorker who lunges at the chance to reconnect with her dying grandmother. Your own grandmother helped to raise you after your mother died.
I only saw strong women around me because my grandma was so strong. She told me that all the things I came home crying about—like being bullied or my voice—were the things that were going to make me special. She loved my spunkiness.

Both Crazy Rich Asians and The Farewell have some deep ideas about Asian families, characteristics that make them universally relatable, as well as very specific.
These movies are about families in crisis and everyone has been around their family in a crisis. But more so than that, there’s a deep reverence. There’s a term—filial piety—that you’ll almost never hear outside of the context of East Asian studies. It has to do with the relationship between the younger generations, their elders and their ancestors. It’s an undying respect. There are certain tropes that are very true to Asian culture. You can’t call them stereotypes. They’re just aspects of our culture.

The Farewell requires a lot from you, dramatically. Were you ever worried about delivering?
I didn’t know if I could cry. I was worried about my Mandarin. I was worried about doing drama for the first time. But you have to choose the projects that speak to you. All those insecurities vanished because it was so real. It was a real connection I had with Billi, as if I were living it. And maybe that’s the key to dramatic acting.

How will Awkwafina handle the awards buzz?
If people say I’ve arrived in a serious way, I’ll have to use my platform to give others a chance. Because that’s what I want. I need there to be representation behind the camera and in front of the camera. I need that for me.

“Always,” says Awkwafina without missing a beat, when asked if she’s proud to represent Queens, where she grew up. “People underestimate Queens—it’s so culturally diverse, so big, so different. You have a very urban side and a very suburban side. It’s incredible.” Here are a few of her choice hangs.

David’s Taiwanese Gourmet
“It’s this Taiwanese diner that’s open late. I love it because it has stinky tofu and lots of other things that might spook your readers.”

Knish Nosh
“I love that place—oh, God, I hope it’s still there. You never know. [Editor’s note: It is.] It’s one of my favorites.”

The Creek and the Cave
“It’s a comedy club right at the foot of the Pulaski Bridge. I used to live across the way from the John Jay Byrne Bridge. My dad and I used to walk across. He’s very funny himself—by accident, obviously.”