The actress talks about her two huge upcoming projects: a radical adaptation of Thomas Hardy’s ‘Far from the Madding Crowd’ and an all-star drama about the suffragette movement

Could life get any better for Carey Mulligan? The Brit actress was a gamine twentysomething when she hit the A-list, picking up an Oscar nomination for ‘An Education’, then stealing the coveted role of Daisy Buchanan in Baz Luhrman’s lavish ‘The Great Gatsby’ from just about every actress in LA. Her pixie haircut and luminous talent led to swooning comparisons to Audrey Hepburn.

Now, about to turn 30, she looks more like the new Meryl Streep. Outgrowing the ‘starlet’ tag, Mulligan is just too intelligent to be a Hollywood it-girl. This year she’s the lead in Thomas Vinterberg’s radical Thomas Hardy adaptation, ‘Far from the Madding Crowd’, and in the hotly anticipated ‘Suffragette’, where she’ll be smashing windows in the company of Streep, Helena Bonham Carter and Romola Garai. But after edgy contemporary roles in ‘Shame’ and ‘Drive’, are costume dramas a retro step?

It’s been a while since you’ve done a period drama. Did you worry about donning a corset again?
‘I did lots of costume dramas in my early twenties. I felt slightly nervous about doing more after that because I didn’t want to get pigeonholed as a “British” actress. I just loved that there was a story set in Victorian Britain about a woman who rejects a proposal in the first 20 pages. She doesn’t start off looking for a man to marry. It was amazing that he wrote such a complex, interesting, fully fleshed out character who was so ahead of her time.’

You own a farm in Devon with your husband Marcus Mumford. Are you a proper Hardy-style Wessex girl? Can you milk a cow?
‘I did brush up on my horseriding for the film. My mother’s side is Welsh and I grew up around animals, and, yep: I’ve milked the odd cow.’

You’re about to go to the premiere of ‘Far from the Madding Crowd’. What’s watching yourself on screen like?
‘I think it’s fine when you play smaller roles but when you’re in every frame of every film it’s like listening to your voice on an answering machine but a 1,000 times worse. You just sit there and cringe. Tonight I might slink off after a bit and not watch. You’re allowed. People understand that it’s painful to watch yourself on screen.’

You were 22 when you got your big break in ‘An Education’. Does acting get easier as you get older?
‘I feel more confident. When I started out I felt like a real novice and every room I went into felt really intimidating. It’s always nerve-wracking starting a new job. But then I only take on challenging things. I’m always presenting myself with big problems.’

You’ve said that exposure and fame made you scared and anxious. Is it still excruciating?
‘No, not excruciating. I found it totally overwhelming at first because it came out of leftfield. It was a big shock to my system and I didn’t know how to handle it. I think I take it less seriously these days. I don’t think it’s massively important what my photo looks like on a red carpet. In the grand scheme of things a bad review doesn’t really matter.’

When you were a teenage hopeful you wrote to various industry bigwigs including Kenneth Branagh, asking him to be your mentor.
‘Yep, I’m still chronically embarrassed by that!’

‘People confuse being an actress with being famous’

Now you’ve made it, do you return the favour and reply to wannabe actresses who write to you?
‘I do, I do! I write back. But not to all of them. There’s an interesting thing that people confuse being an actress with being famous. I do try to respond to those letters I receive when I feel there’s somebody who’s really interested in being an actress. It’s pretty clear the ones who just want to be famous and those ones I don’t write back to.’

In your twenties you achieved serious fame, snogged Leonardo DiCaprio in ‘Gatsby’ and got married. What would you like to achieve in your thirties?
‘I don’t know. I’ve had a great run of getting to work on strong female characters and I’d like to continue that. I’d like to get more involved in producing things that I’m not necessarily in. And do a mix of theatre and film. I want to spend more time in England too.’

Actresses, even more than most women, get judged on how they look more than what they say. Does that piss you off?
‘Yes. I think the “ask her more” campaign that people were talking about at the Oscars,  to ask women on the red carpet about more than what they’re wearing, was really great. They had a “manicure camera” for people to show their manicures, which seemed absolutely absurd. I don’t think it’s important for a million people to learn what your favourite nail colour is. Stop asking ridiculous questions!’

You’re the toast of Broadway in David Hare’s play ‘Skylight’ at the moment. How does it feel to be described as a ‘hypnotic presence’ by the New York Times?
‘“Hypnotic presence”? Really? That’s good, I’ll take it. It’s hectic when you’re opening and the critics are coming but we’re open and starting to enjoy it.’

Where in the world do you feel most at home?
‘London. I lived in the States for a while and I just ended up being really homesick for London. Most of my family is here: it just sort of feels like it’s my home town.’

What do you miss most about it?
‘Ordinary things. I was at the airport the other day and I was: Oh, man, I want an Itsu so badly. I’ve got to go to Itsu. Then I went to my hotel and “MasterChef” was on TV and I was like: Oh this is a dream! Switching on the news and it’s BBC breakfast not some ridiculous American news show where it’s all scaremongering and 18-minute-long advert breaks.’

You’re playing the lead in ‘Suffragette’, which is the first film to tell the story of the women’s rights movement in London…
‘The mere fact that it’s taken 100 years for this story to be told is hugely revealing. This is the story of equal rights in Britain and it took years of struggle and women being tortured, abused and persecuted, and it’s never been put on a screen. It’s such a reflection of our film industry that that story hasn’t been told yet.’

How sexist is the film industry?
‘In terms of the amount of interesting roles there are for women it’s obviously massively sexist. There’s a lack of material for women. A lack of great stories for women.’

Who’s your heroine?
‘Meryl Streep is probably most actresses’ heroine but then she is incredibly inspiring. She’s using her power in the industry in a really positive way. She’s wanted to make a film about women’s rights for a long time.’

If you could only watch one film for the rest of your life on your desert island, what would it be?
‘“Indiana Jones and the Last Crusade”. Without a doubt. I was going to say “Jaws” but you couldn’t take it to an island because you’d never go in the water. But “Jaws” is an almost perfect film.’

‘Far from the Madding Crowd’ is in UK cinemas from May 1.

More about ‘Far from the Madding Crowd’ 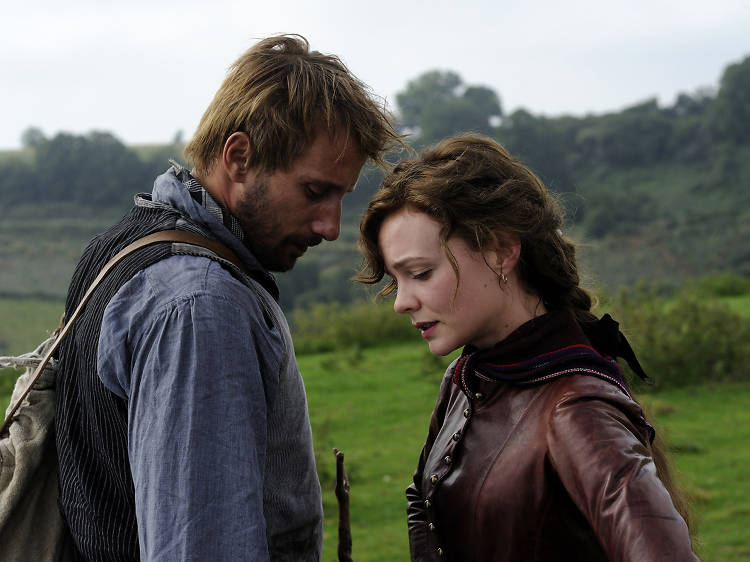 A full century on from its first big-screen adaptation, Thomas Hardy’s heartfelt 1874 novel of love among the sheep pens gets the lush, upscale period-drama treatment it fully deserves.