Desus and Mero can’t turn it off. Over the course of their conversation with Time Out New York, the hosts of Viceland’s late-night show Desus & Mero (Daniel Baker, a.k.a. Desus Nice, and Joel Martinez, a.k.a. the Kid Mero) tackle only a handful of questions, inevitably stretching each answer into an improvised routine often miles away from where they started. In fact, the only difference in watching their quick-thinking, off-the-cuff back-and-forths in person versus on the show is that one is taped. (True to this spirit, they don’t even have a writing staff or rehearse bits.) In each episode, the Bronx-born pair simply sound off on newsy or viral or completely random clips—all topics are listed on the top right corner of the screen—and then welcome a guest. Visiting celebs range from Erykah Badu and Seth Rogen to New York Times food editor Sam Sifton and Diddy; subjects like “Trumpito,” rap beefs, bee sex and why Malcolm-Jamal Warner has a tongue ring are all fair game. It’s a refreshingly off-the-cuff approach—with a laugh-out-loud, no-nonsense New York flavor—you just don’t see on TV.

Could you guys, super quicky, just take me through your evolution as a comedy duo?
Desus: Okay, so my parents met in Jamaica. It was a hot day, underneath the palm trees. No, basically, long story short, boom: We both had crappy jobs. We started a podcast with Complex magazine, did about seven episodes of audio. It switched to video because people liked it so much. MTV 2 came calling. We did a little quick run there for like two years. Then Vice came and was like, You guys want your own show?

Your recognition must have skyrocketed in the past year.
Mero: It’s been a slow burner. It started very gradually at MTV. We would go just walk out and leave the office for lunch and people would be like, Oh hey, I saw you guys for like 10 seconds on Guy Code or whatever. And with the advent of Desus and Mero it really did blow up like crazy. If we’re together, we definitely get recognized.
Desus: Separate, even. I was at LAX a few weeks ago. Like a TSA agent will drop it under their breath. And it’s like, Oh thanks. Can I go through pre check? And they’re like, No, get back in line you piece of garbage.
Mero: You never see someone and you’re like, Oh, they watch the show. ’Cause we have a sixty-eight year old grandma watching, little kids...

Your guests, too, are pretty diverse.
Desus: We had Paul Scheer; we had Sam Sifton; we had Diddy. They run the gamut. So you might not necessarily watch the show, but you’ll watch a clip online and like, Oh, Rachel Maddow, who are these two guys? Lemme watch their next episode. So on the street the people that recognize us are the weirdest. It’ll be like a 70-year-old guido from Brooklyn who’ll be like [launches into Italian accent], Oooh, Demarcus and Ramero, I love you guys! And then like Obama watches it.

Is that interview going to happen?
Desus: I don’t know what that’ll do for his legacy, but someone who worked at the White House with him was like, Yeah, we used to listen to the podcasts. He knows about the show and everything.
Mero: That’d be wild. It would be so dope to see Obama out of office. I mean, the filter’s still on but it’s turned down a little bit now that he’s out.
Desus: If I could get crazy here, we want Putin. Could you imagine? Like, get him comfortable. I’d be like, Why’d you hack our election? He’d be like, Ah, you know.
Mero: Come on, my nigga. Ah, you mad.
Desus: You mad. Ah, I’m sorry.
Mero: You want to bomb the Ukraine?

How much prep was there for your Viceland show?
Desus: It’s funny. They knew they were gonna have a show. They started doing promos, and we had a premiere date. They had no idea what the show would be like up until maybe a week before we launched.
Mero: We went through several different ideas of what the show was gonna be. First it was gonna have a graffiti backdrop and then [Viceland cofounder] Spike Jonze had this crazy Spike Jonzian thing. We’re sitting in this pre production meeting. We were talking about the backdrop and he’s like, No, you guys are the graffiti.
Desus: The verbal graffiti. You’re the art.
Mero: You’re the art. You don’t need anything. It should just be you.
Desus: ’Cause, also, who’s gonna tell Spike Jonze he’s wrong? The guy made a movie about fucking computers.

Has there been a learning curve with the show?
Desus: Probably the animal-sex videos. Because at first every now and then the crew would throw in a video for themselves that we’d just laugh at and we’d know like legal’s not gonna clear it. Also, Trump. At first, we were [covering] him a little more wonky. We were thinking we’re burning out the audience. But then we realized Trump is so bizarre, we could talk about him every day.
Mero: He does something stupid every day. Literally everyday. In the beginning, I feel it was a little less frequent. He’d do something crazy like every week.
Desus: He’d do things like, Oh, I’m not gonna appoint a commissioner for this. Now it’s like: Our new currency is bitcoin. That’s it. Throw away your dollars. So for us, it’s like, Do we have to make sense of this? And it’s like, No. The show is us sitting watching this, going, What the fuck?

I love it because CNN will serious debate something crazy he says for hours. You guys just mention it quickly then move right onto the next topic.
Desus: I watch MSNBC and CNN all day, and I feel sorry for those guys. You see people and they’re hammering away because they have to keep feeding the beast. And I feel like our show is the right speed cause it’s like boom boom boom, next thing. ’Cause if you don’t like something, wait two minutes. Another topic is gonna come on.
Mero: But it’s not like we’re talking about Trump and then it’s like [car breaking sound], Ray J has beef with Tyrese.
Desus: You’ll watch it and it’ll start with “Trump has beef with North Korea” and end with,” Yo, you remember that guy from The Cosby Show, Malcolm Jamal Warner? Did you know he has his tongue pierced?”

I’m sure you get this question all the time. Are you guys high on every show?
Mero: Depends on the day.
Desus: High on life.
Mero: We’re insured now so we can’t be like, Yeah, we smoke hella weed onset.

What are other late-night hosts thoughts on the show?
Mero: Stephen Colbert was like, You guys do this show every night, right?
Desus: He was like, Oh, you do it every night, not every week like that pussy John Oliver? It was like, Oh shit! Then we met Trevor Noah, and he was like, How are you not burned out yet?
Mero: “This is such a grind.”
Desus: And we were drunk like we were at Yankee Stadium and like, Ah, what you talking about Trevor Noah? Sack up.

Looking for a TV tour in NYC? 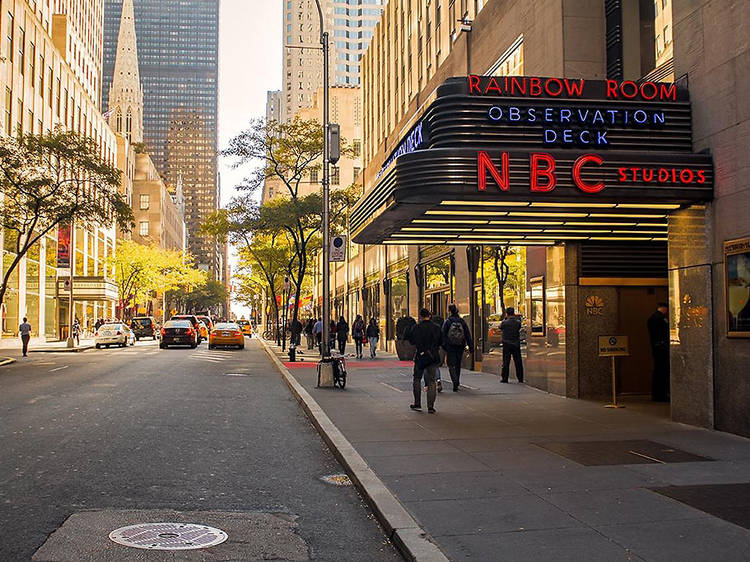 Check out the best TV and movie tours in NYC