Filmmaker Joe Wright on period dramas, pirates and reverting back to childhood with ‘Pan’

If Peter Pan is the boy who never grew up, then the film director Joe Wright is the boy who grew up and now slightly regrets it. London-born Wright, now 43, is known for making ambitious, literary, adult dramas like 2012’s ‘Anna Karenina’. He was barely 30 when he directed Keira Knightley and Donald Sutherland in ‘Pride and Prejudice’; at 33, he gave Benedict Cumberbatch one of his first high-profile roles in ‘Atonement’. But now Wright has rediscovered his inner kid by taking charge of ‘Pan’, a new big-budget 3D version of the Peter Pan story. It’s an eccentric blockbuster, with flying ships, Hugh Jackman playing a vain paranoid pirate, Cara Delevingne popping up very briefly as a mermaid and a sudden, film-stealing burst of Nirvana on the soundtrack.

Children’s storytelling is in Wright’s bones: in the early 1960s his parents John and Lyndie Wright founded the Little Angel kids’ puppet theatre in Islington, and that’s where Wright grew up, answering calls from punters, taking bookings and crossing out seats in a big red book that sat on a table next to the telephone. He still lives nearby, with his wife, Anoushka Shankar (daughter of Ravi), and they have a four-year-old son, Zubin, whom he credits as a big inspiration on ‘Pan’.

‘I wanted to celebrate the deep love I see my son have for his mum,’ he says, ‘and to make a film about it, for them.’

Wright is a passionate, open, energetic person in conversation, artfully scruffy and puffing away on an e-cigarette, with a lively voice that betrays something of the eccentric entertainer within.

You’re known for films like ‘Atonement’ and ‘Pride and Prejudice’. This must be the first time as a director you’ve had to think of entertaining kids?
‘It’s true. My dad was a puppeteer and he saw puppetry as a fine art – which meant he found it difficult when people wanted him to do nice little children’s entertainment stuff. It was the burden of his creative life, so he bucked against that. For me, the idea of doing a family movie – well, I was a little bit snobbish about it, I’m embarrassed to say. Then, once you have kids, you see things a bit differently. You have to take yourself less seriously.’

Your ‘Pan’ is quite barmy, with flying ships and pirates dressed in women’s clothes…
‘I wanted to make something anarchic. Some films I loved as a kid were completely nuts. Also, it was me asking myself who I was before adolescence. Who was that kid that I suppressed later on? Now I have a son, I’m watching him and rediscovering that bit of myself that had a free imagination and isn’t trying to be cool or seek your approval, but is a nutcase.’

So what was the young Joe Wright like? The one you suppressed as a teen?
‘Before adolescence, when I was 11 or 12, I would wear cravats and call myself The Great Kazam and I would busk in Covent Garden. Every Saturday, I would go and be like, “I am The Great Kazam!” and go and perform magic tricks. I would wear flares and a top hat. I loved Noël Coward and I used to sing Noël Coward songs. I didn’t care what other people thought of me.’

Why did you abandon all that?
‘Suddenly, adolescence comes and the desire to have a girlfriend and all that stuff is clamped down. People took the piss out of me and called me gay and all that stuff. So I tried to conform and be like everyone else and be cool. I turned my back on that little kid and thought he was uncool and hated him. In fact, I think my adolescent self was betraying the child. He was really cool!’

‘It's amazing how much blokes want to be pirates’

‘Pan’ takes place before JM Barrie’s story. But presumably you took a lot of the spirit of it from his writing?
‘I was trying to get across the strange human quality of Barrie’s book that I find weird and wonderful. There’s an amazing thing he writes about how at night your mum comes and opens up your head and reorganises your thoughts like a chest of drawers. That’s just weird!’

With ‘Pan’, did you quickly get used to being in charge on such a big movie?
‘There’s an element that feels a bit like being the CEO of a giant pop-up corporation, and that’s fucking terrifying. Here, whatever you could imagine, you could pretty much achieve it.’

Hugh Jackman’s pirate, Blackbeard, enters the movie to the sound of hundreds of people singing Nirvana’s ‘Smells Like Teen Spirit’. Where did that idea come from?
‘That was a silly idea that made me laugh. I had a core group of pirates that I cast, a lot of old mates, actors from Kneehigh Theatre, and we got together with Hugh Jackman for a week of pirate workshopping. They were a hoot. It’s amazing how much blokes want to be pirates. We started playing some music and tried the obvious sea shanties. But they were sounding twee. So I put on my punk playlist and then thought: why don’t we have an all-singing “Smells Like Teen Spirit”?’

How did you find the little boy, Levi Miller, an Australian, to play Peter Pan?
‘It was difficult because Saoirse Ronan had set such a high bar with “Atonement”. For this, we did a global search in every English-speaking country in the world. After seeing thousands of tapes, Levi’s face popped up and we just went: “Oh, there he is”. Those rehearsals were helpful in getting Levi used to Hugh Jackman. For the first three days, he couldn’t call Hugh anything other than “Hugh Jackman”, like Kevin and Perry. “Yes, Hugh Jackman. No, Hugh Jackman. I’m going to the toilet, Hugh Jackman.” And every time Hugh looked at him, Levi went bright red.’

Has your four-and-a-half-year-old seen the film?
‘My son has seen it. But he saw it all the way through as I edited it at home. He would come in after nursery every day, asking: “Which bit are you working on now, Daddy?” We did some test screenings where the audience let us know it was a bit too violent, so you go: “Okay, we have to turn the violence down. I want seven-year-olds to enjoy the film.” It was more scary. I toned down the screams!

Read our review of ‘Pan’ 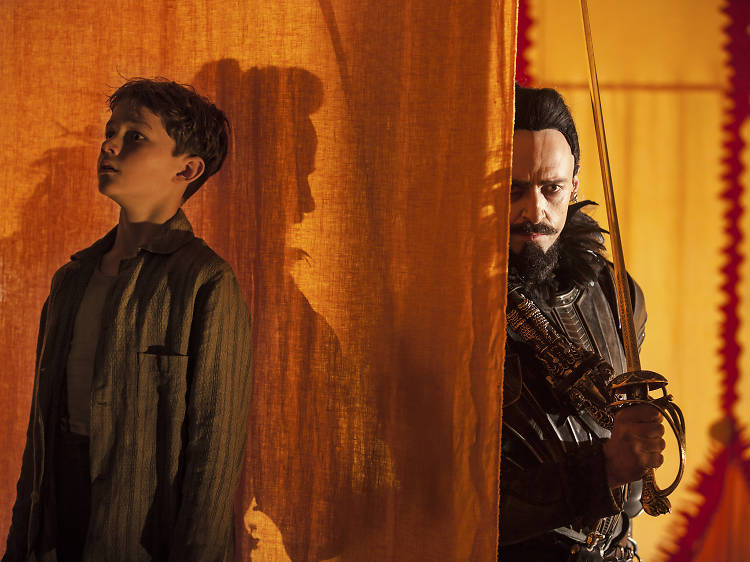 The Peter Pan stories have inspired fresh looks before, including Steven Spielberg’s ‘Hook’, with Robin Williams as the boy who did grow up, and ‘Finding Neverland’, which saw Johnny Depp play the author JM Barrie. Now ‘Atonement’ director Joe Wright, embarking on his first family film, gives us a boisterous ‘origins’ spin, imagining how and why Peter became Pan.