Nicholas Hoult on shaving his head for ‘Mad Max: Fury Road’ and those James Bond rumours

The Londoner chats about the long road from romcom kid to motor psycho, as well as his role as a scarred skinhead in ‘Mad Max: Fury Road’

British actor Nicholas Hoult has come a long way since starring as a floppy-haired kid opposite Hugh Grant in the 2003 movie ‘About a Boy’. Since then, the 25-year-old has been in two series of ‘Skins’, acted for fashion supremo-turned-filmmaker Tom Ford in ‘A Single Man’, and shot two ‘X-Men’ films as the blue-haired mutant Beast. Oh, and somewhere along the way he dated his ‘X-Men’ co-star Jennifer Lawrence in an on-off relationship that ended last summer.

Now the boy from Berkshire is starring opposite Tom Hardy and Charlize Theron in sci-fi fantasy ‘Mad Max: Fury Road’. It’s the fourth film in the long-running series that began way back in 1979, and Hoult’s character Nux is the stuff of nightmares. He’s a machine-obsessed, heavily scarred, post-apocalyptic gang member leaping and bouncing around the screen like a rabid bald puppy.

When we speak on the phone, it’s Saturday morning in Los Angeles. Later he’ll be making a lightning trip to Las Vegas to catch the big boxing match between Floyd Mayweather and Manny Pacquiao, but before that, he’s friendly and energetic and talking about playing one of cinema’s more terrifying recent creations.

You look like a nutter in ‘Mad Max: Fury Road’. You’re as skinny as a rake, with horrible scars, white skin and a bald head. Did you start by shaving off your own hair?
‘Yeah, that was the first step! I went via a mohawk first. I was like: you know what, I’m probably not going to shave my head for a long, long time after this, so I might as well do that. The mohawk got laughed at though, so I just kept it for a day. Then I did the full shave.’

Did you leave the house with the mohawk?
‘I did, yeah. I was already in Namibia in Africa [where ‘Mad Max’ was filmed], so it wasn’t like I was going to bump into anyone I knew. Also, my character is meant to be quite sick and not have much food, so George [Miller, the director] wanted me to be quite skinny. I was eating little and jumping a lot of rope.’

What’s your tip for budding skinheads? Blade or electric?
‘I used an electric every other day.’

You shot ‘Mad Max’ in the desert. Was it as brutal and beautiful as it looks?
‘It felt like you were on the moon most days. It’s an isolated place, and literally 360 degrees around you, all you could see was the horizon and heat shimmer. Then a crew of about 700 people would roll in from nowhere and spend the day driving an armada of vehicles around, blowing stuff up. A lot of the time blockbuster movies are very safe and even though I’m in it I think this is one of the most original things I’ve seen. You felt that on set – you’d turn up in this stark landscape with all these incredible creations all around you.’

You’re about to start filming ‘X-Men: Apocalypse’ in Montreal [scheduled for release in 2016]. Are you a science  fiction, fan then?
‘I am, and I seem to do a lot of it! It’s like playing make-believe as a kid but with some of the most talented people in the world. Mostly they’re grounded in some sort of reality. The power of the villain in “Mad Max” comes from control of natural resources. You see it all the time. Have you seen that documentary “Virunga” about oil exploration in the Congo? It’s the same thing: they find out there’s oil or precious metals and suddenly these faceless companies roll in and destroy beautiful places. The film draws from those sorts of things.’ 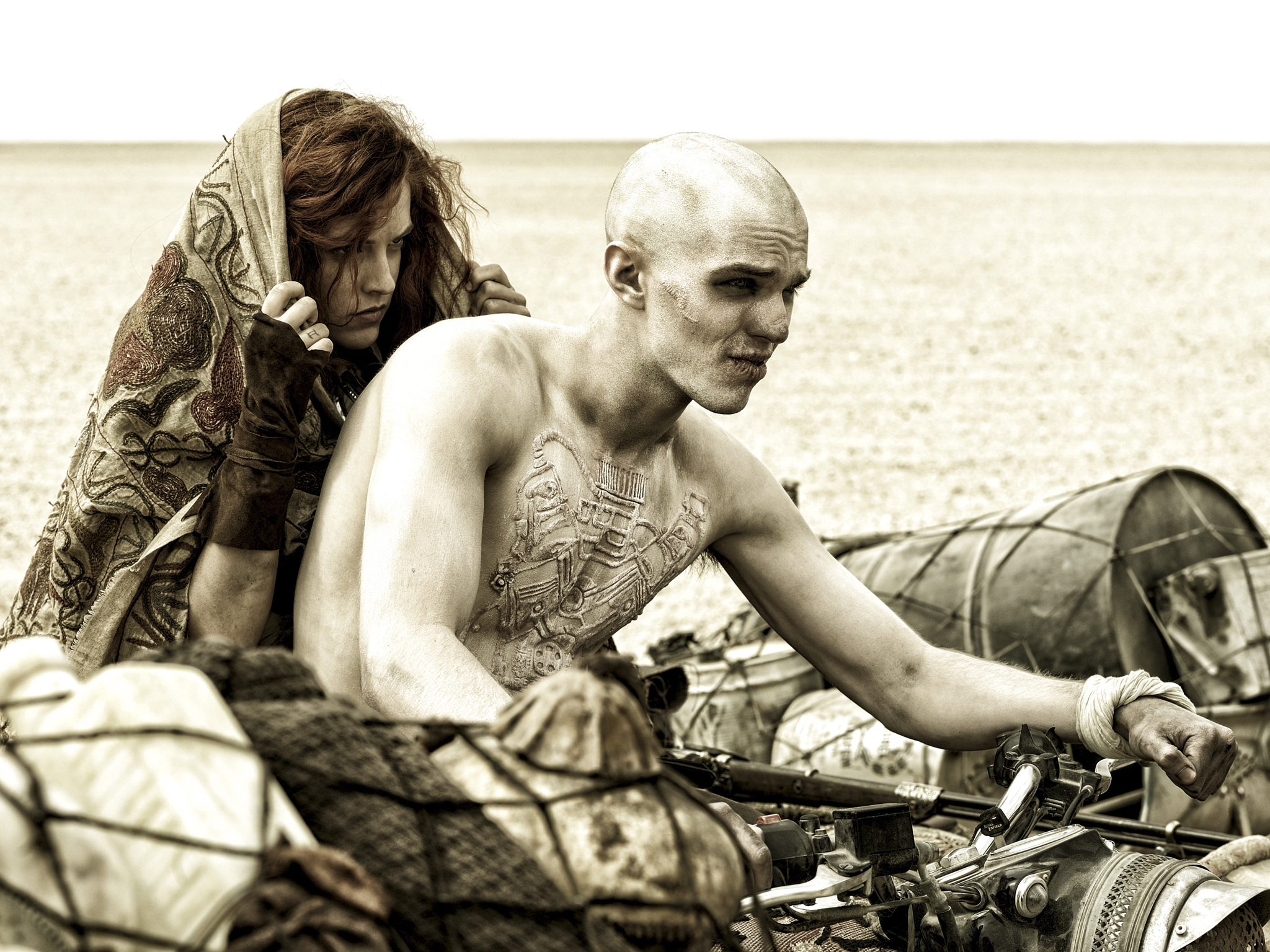 How was Tom Hardy to work with? Is he as intense as he looks?
‘Completely. I’ve been a big fan of him for a while now. When you get to work with actors you look up to, the first thing you want to do is figure out how they do what they do. He’s as dynamic in the scene as he is on-screen. You’re not quite sure where he’s going to go next. He keeps it fresh. It’s a lot of fun to do scenes with him.’

He’s playing both the Kray twins in the new film ‘Legend’ later this year, isn’t he?
‘Yeah I saw the trailer for that, it looks cool. Those boys had such an interesting life, it’s going to be quite a film, I think.’

I hear that you’re off to Las Vegas tonight to watch the Mayweather-Pacquiao fight. You’re a boxing fan, then?
‘I am, yeah. I love boxing as a sport. I go to Islington Boxing Club up in Archway when I’m at home. It’s difficult. It’s like a chess match, it takes a lot of skill. They’re a really friendly bunch of  guys down there.’

What do you do there? Punchbags, that kind of thing?
‘We do punchbags, we jump rope, we get in the ring and shadow-box. Me and a friend spar with each other a bit, as long as there’s no headshots! Although sometimes you do miss. I did for a while get the nickname of “Headshot Hoult”, which isn’t a great nickname. It wasn’t intentional. But we both catch each other occasionally. I get hit in the face a lot.’

So London is still home?
‘Yeah, I live in northwest London. I’m on the road a lot, but the last four or five months I took off and managed to spend some time at home. Just relaxing and chilling out. I’d been away for a while and missed it.’

Your CV has sci-fi locked down. But is there another sort of film you’d love to do? A musical, maybe?
‘With my singing and dancing abilities? I wouldn’t want to torture people with that. I’m always after different roles. That’s why “Mad Max” was so appealing. A lot of my characters have been more restrained, self-conscious, keeping things beneath the surface. But this character is so out there. It’s a very different thing to attack.’

Will you throw your hat in the ring when Daniel Craig finishes with the Bond franchise?
‘I think I’m too young! He’s got this film and then one more to go, hasn’t he? So that’s another five years? I’ll only be 30, and I think I’d need another few years behind me to play Bond. Maybe a little bit further down the road, who knows? I mean, I grew up loving James Bond.’

You made your first film at five. Do you even remember it?
‘I remember the audition very clearly. They asked me to sit under a table and pretend to eat cake, and I was like: “Yeah! I can definitely do that!” I must have been a great imaginary cake-eater as I got the role. In the actual film I got to eat loads of sweets too, while playing Julie Walters’s grandson. That was the peak of my career actually. I’ve been looking for a role like that ever since.’ 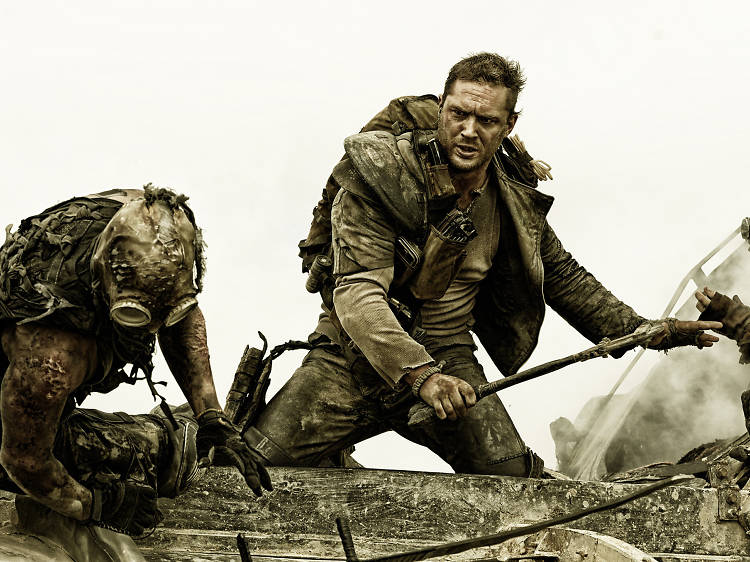 In an age of weightless movie spectacles, here’s a movie that feels like it was made by kidnapping $150 million of studio money, fleeing with it to the Namibian desert, and sending footage back to Hollywood like the amputated body parts of a ransomed hostage. 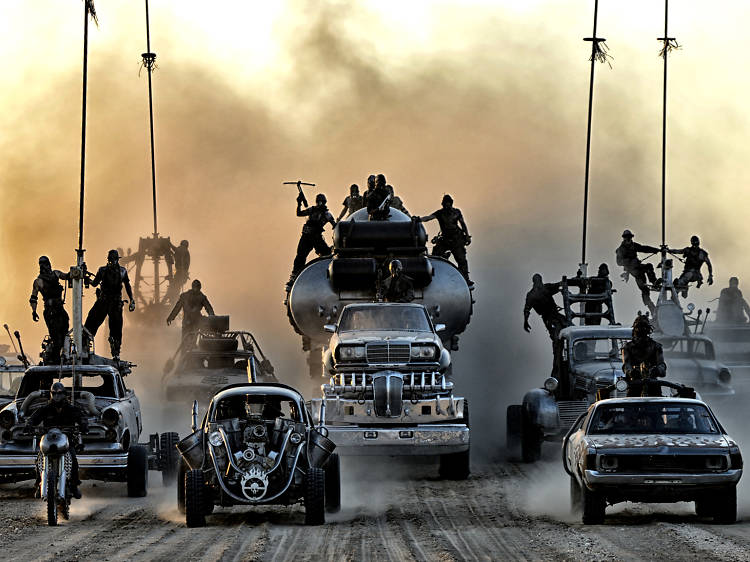 Ten reasons why ‘Mad Max: Fury Road’ is the best blockbuster of 2015

We never thought that George Miller’s thunderous reboot of his original ‘Mad Max’ trilogy could match those eye-frazzling trailers. How very, very wrong we were. ‘Mad Max: Fury Road’ has set this year’s blockbuster-reboot bar so high we’ll be amazed if even the new ‘Star Wars’ can vault over it.