Steering Episode VIII to a darker place, gifted filmmaker Rian Johnson makes the most of his dream gig

When Rian Johnson finished his third directorial effort, 2012’s brainy sci-fi action indie Looper, he posted a typically self-effacing tweet. "[This] will complete what I’m calling my ‘I made three movies’ trilogy," he joked, as if his career has just peaked. Not quite. Five years on, nattily dressed in a button-down shirt and looking every inch your cool college professor, he’s about to share the single biggest movie of the year with the planet. So how did this amiable Maryland-born director land Star Wars: The Last Jedi—or Episode VIII, for those keeping track—and have superfans hailing him as the new George Lucas? The soon-to-be blockbuster remains under wraps when we sit down with him, but Johnson’s future is mapped out: He has the keys to the galaxy for three more wholly original Star Wars installments, a huge vote of confidence in his ideas. In the meantime, he promises, The Last Jedi will be "going to some intense places."

Happy birthday in advance. So you’re the perfect age for a raging Star Wars obsession. How big a fan were you as a kid?
It was my whole world. That’s the whole reason why I’m here. When I was four years old, I remember my dad putting me in the car to go see it. But if you were a kid in the ’70s, it’s not like you got to see the movies much. You saw them maybe once in the theater, and there was no home video. More than the movies—and you hear this a lot from people my age—it was really the toys.

I think I went through four Yodas, all lost to the backyard.
Ah, we had the same experience, so you understand. My first “creative play” was with those toys and in that world. That, maybe even more than the movies, is what creates the fusion directly in your heart.

So are you the kid with the Star Wars bed sheets?
Oh, yeah: the Underoos, everything. Are you kidding? But inevitably, I put my Millennium Falcon together and threw it across the room to see what it would look like flying. So I shattered all my toys. The only figure that doesn’t get lost is, like, Hammerhead or Walrus Man.

And then you find him in your garage decades later and you start to cry.
It’s funny you say that, because walking on the Millennium Falcon set for the first time, it was this almost involuntary emotional reaction where I found myself getting a lump in my throat and tearing up. And I wasn’t thinking about the movies—I was thinking about my Kenner toys and being a kid and projecting myself inside them. It wallops you.

I recently returned to the film George Lucas made just before Star Wars, 1973’s American Graffiti, and I noticed that all his ideas are already there: nostalgia, a love of machines, camaraderie. What is it about Lucas’s style of filmmaking and the Star Wars movies that’s become so deeply rooted in our culture?
You led me down the path, so I’ll wax philosophical and try to not be boring. Famously, Lucas used to talk about [mythologist] Joseph Campbell and The Hero’s Journey. But the truth is, the hero’s journey is not about becoming a hero—it’s about becoming an adult. It’s about the journey through adolescence and the transition from childhood into adulthood.

It’s about putting away childish things, but also becoming aware.
Exactly. Learning who to trust, with new powers rising up in you that you don’t understand. Moving from a small world into a bigger one, and everything that’s scary about that. And then The Empire Strikes Back went down the rabbit hole with something darker: the relationship with the father and the realization that the thing you thought was the “bad guy” is a part of you. That’s what the old myths do: give you a roadmap for life. That’s what makes these movies tick.

That wasn’t boring at all. You bring up Empire, so I’ll ask: Was it always the idea that the director after J.J. Abrams was going to bring this trilogy to a darker place?
Well, a little bit. The job of any middle chapter, or even the second act of a movie, is to put the characters through hell. That’s where everything goes wrong. They have to go through the valley and see how they handle it. That’s where character comes from. So by necessity, we knew we were going to go to some more intense places.

“The job of any middle chapter or even the second act of a movie, is to put the characters through hell.”

Rian, you’re scaring me.
At the same time, having grown up with Star Wars, I didn’t want it to fall into heaviosity. I wanted it to be a Star Wars movie. For me, that means it’s fun, it’s funny, it’s a ride. It’s like what you were talking about with Graffiti and camaraderie: It’s jumping into the car with your buddies and you’re zooming into the night and having these adventures. And it’s all going to be okay. J.J. really got that with Force Awakens. I got the juicy middle part.

Why you?
To be honest, I have no clue. That’s not modesty. I don’t know what made them think: Let’s get the guy who did Looper, Brick and The Brothers Bloom. Clerical error, maybe? I’m very happy they called me. I’m proud of the movie—it feels personal to me, as much as any of my other movies do.

I think it’s because you have good instincts. Did you write the script?
Yeah.

What exactly does that mean, “Yeah”? Was there an outline or was it just: Okay, go?
That was one of the things I needed to figure out, before I even said yes. Hand to God, the process was this: I got the script for The Force Awakens, and then they said, “Okay, what happens next?” There was no big outline. It was really a baton handoff. I loved The Force Awakens and I wanted to carry that story forward, as if it were flowing organically. But beyond that, I really had the freedom to find the story I wanted to tell. The original movies were personal for George and that’s what gave them a beating heart. So forget them trying to steer me one way or another—they were actively pushing me to find something personal.

Were you worried about losing your “indieness”?
I guess I don’t think of it as indieness. I definitely wasn’t worried that could I plug into this. This stuff has deep roots for me.

And you’ve just signed on to do three more films in the Star Wars universe. They must really love The Last Jedi.
I guess. I hope they do. We all got along. It was really about finding a way to keep working together. So I was told them that the thing that would be most interesting to me would be the opportunity to tell a new story over three movies, to have that big canvas with all new characters, but in this world.

You basically negotiated yourself into George’s position in 1976.
[Laughs] The fact that he created this from whole cloth is nuts. It’s very surreal.

How did you like shooting in London?
I had a blast in London, but granted, I was living in Star Wars. I was going into Pinewood everyday. I was living at the studio. We basically took over the entire place. It really felt like our private little club.

Talk to me about porgs. You introduced the world to them with the trailer and the global reaction was porgasmic. Where do they come from?
I was looking for any opportunity to get lighter elements onto the island with Luke and Rey. And when we scouted Skellig Michael, which is the island off the coast of Ireland where we shot, it’s a bird sanctuary and it was covered in puffins. Literally, you had to watch your step so you didn’t crush these little adorable creatures. They’re waddling around, pathetically trying to fly. So I said: This is it. Let’s come up with the Star Wars version of this. This is a part of the environment.

George never did that.
You think? Star Wars has to do with reflecting the world as it is. These movies always end up being applicable to what’s going on now. When they told me, before I even read the Force Awakens script, that I was going to have a female protagonist, I leaned forward in my chair. That was exciting. Having grown up the last 40 years watching dudes be the heroes, it felt like scratching a place you haven’t been able to scratch for a while, just to see some new faces we haven’t typically seen. You can apply Darth Vader to whoever you don’t like in politics now. It’s the stuff under the stuff. 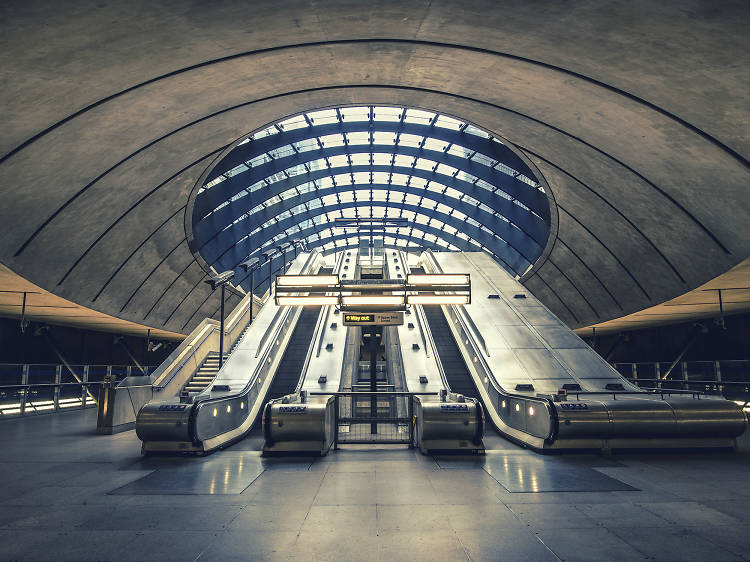 We scoured the galaxy – well, Greater London – for half a dozen locations that have helped make the ‘Star Wars’ franchise what it is. Pack your virtual Oyster card and join our tour de Force...