A tourist’s guide to Akko: where to eat, explore and sleep

Nestled on Israel's northern coast, Akko is an up-and-coming port city rich with Jewish history, sights and fantastic food. A UNESCO World Heritage Site, this Israeli treasure is a unique cross between east and west, modern and ancient Israel, beauty and ruins. Its rich history is palpable in its alleyways, underground passages and picturesque architecture, whose character reflects the legacy left behind by the Greeks, Romans, Crusaders and Arabs. But what has transformed this hidden gem from a pit stop to a destination is its recent emergence as a culinary force in the north, with some of the best hummus on the eastern Mediterranean (some say it’s better than the Jaffa street food offerings) and some of the best seafood restaurants in Israel.

Things to do in Akko 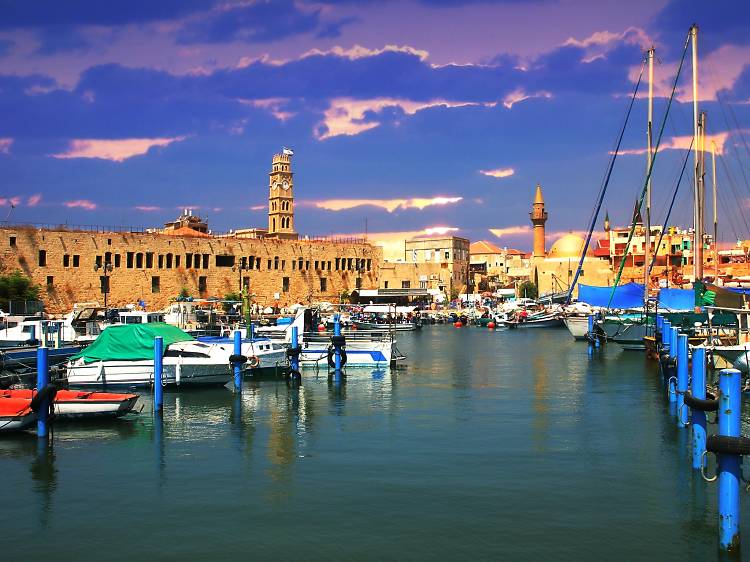 From the classical age until the medieval period, it served as a significant, bustling docking point. Today, it remains a strategic trading shop of the Eastern Mediterranean. Walk through history as you stroll down the quaint, tranquil fishing harbor lined with old fishing boats, and enjoy a breathtaking view of Akko’s old city. At ten shekels a person, you can even hop on a boat tour! Ride out into deeper waters of the Mediterranean for a fantastic view of the city walls and a taste of Akko’s history.
Read more 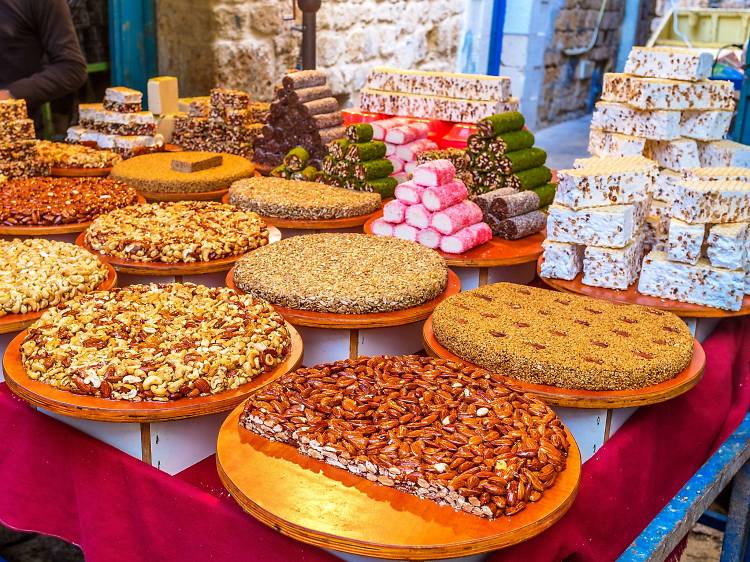 Enveloped by the stunning ancient architecture of the historic old city, Akko’s market has a wonderful selection of authentic Middle Eastern goods, from fresh fish to buckets of spices to delicious Arab pastries and desserts. As you explore the colorful range of stalls, be on the lookout for the delicious cafés and hummus joints tucked away in the market’s charming side alleyways.
Read more
Advertising 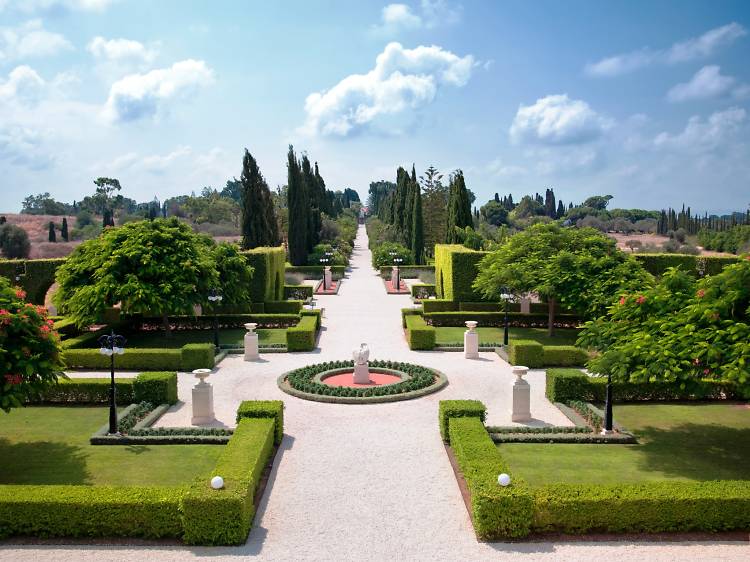 The Bahje Baha’i Centre is a beautiful place where gardens envelop the historic mansion of the founder of the Baha’i faith, Baha U’llah. Within the historical building lies Baha Ullah’s shrine constructed of spectacular ornamental gold, where he is currently laid to rest. Its surrounding gardens are a majestic site of tranquility, with a stunning geometric cascade of hanging gardens, natural elements and terraces. If you visit Friday-Sunday between 9:00 am and noon, you can enter the inner garden and visit the shrine. Otherwise, explore the spectacular outer garden and enjoy a magnificent view of the heart of the site.
Read more 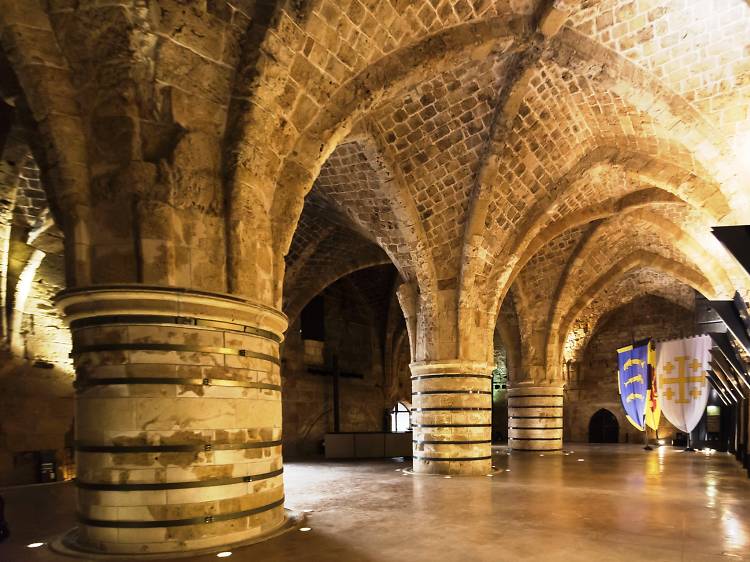 4. Museum of the Underground Prisoners (Akko)

Now, it traces the history of the Jewish resistance fighters who were imprisoned or executed in this very spot. Run by the Ministry of Defense, the museum features an interactive display with original and reconstructed exhibits, a tour of the prison cells and an account of the prison’s rich history. Learn about those who fought to establish a national home in the state of Israel, the circumstances of their imprisonment and the fascinating story behind the 1947 Akko Prison break.
Read more
Advertising 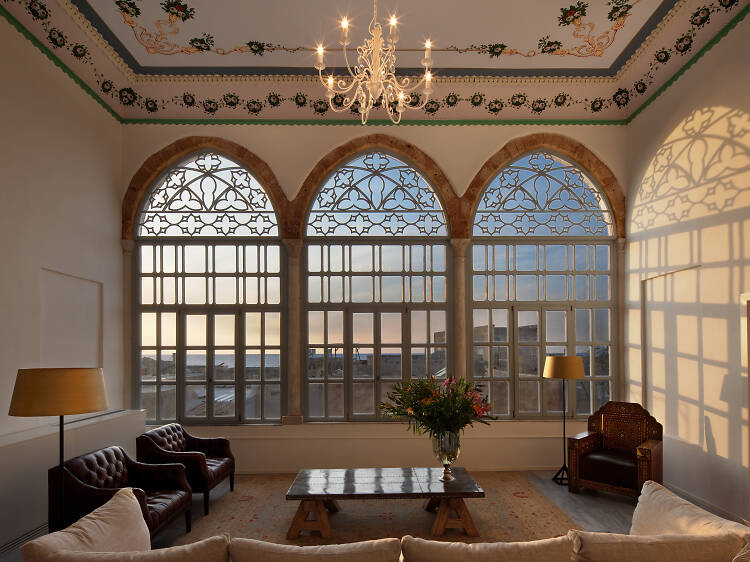 The luxurious Efendi Hotel features a beautiful terrace with panoramic views of the Mediterranean Sea. It is located in the historic centre of Acre. Haifa is a 30-minute drive away.Only a 10-minute walk from the beach, this hotel is surrounded by picturesque alleys and is 100 metres from the promenade. The Jezzar Pasha Mosque is 200 metres away.Set in 2 buildings, rooms are all modern and air conditioned, and overlook the mountains and the sea. Each has free WiFi, and a living area with an LCD satellite TV and DVD player.The restaurant at Hotel Efendi specialises in fresh seafood and local recipes. A varied Israeli breakfast is served and includes eggs, salads, bread, and hot and cold drinks.A relaxing session in the Turkish bath or in the massage rooms is not to be missed. 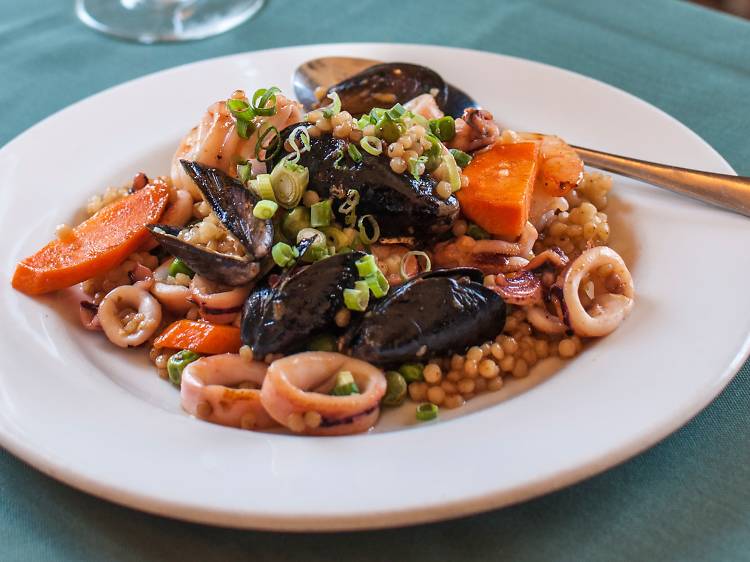 Calling all seafood lovers: while visiting Akko, a trip to Uri Buri is an absolute must. This iconic Akko institution has a minimalist decor and a laser focus on fish and flavor. Every item on the menu is fresh, seasonal and guaranteed to make your tastebuds dance, from the scrumptious seafood soup to the sashimi salmon with wasabi sorbet. 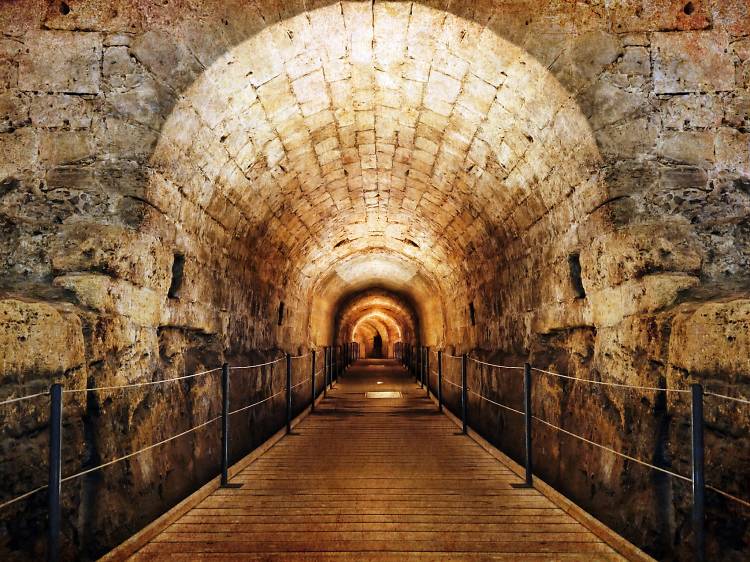 Hidden for 500 years, this well-preserved site was discovered by a local plumber in 1994. It spans from the fortress to the old city harbor, and was previously the Templars’ secret escape route in case of attack. Now, it’s a staple of an Akko Old City adventure, and perfectly accompanies a visit to the Crusader Fortress. Enter at one end of the city and exit at the other, just as the Templars' did. In between, discover a glimpse into Crusader architecture and history, informed by descriptive plaques and images.
Read more 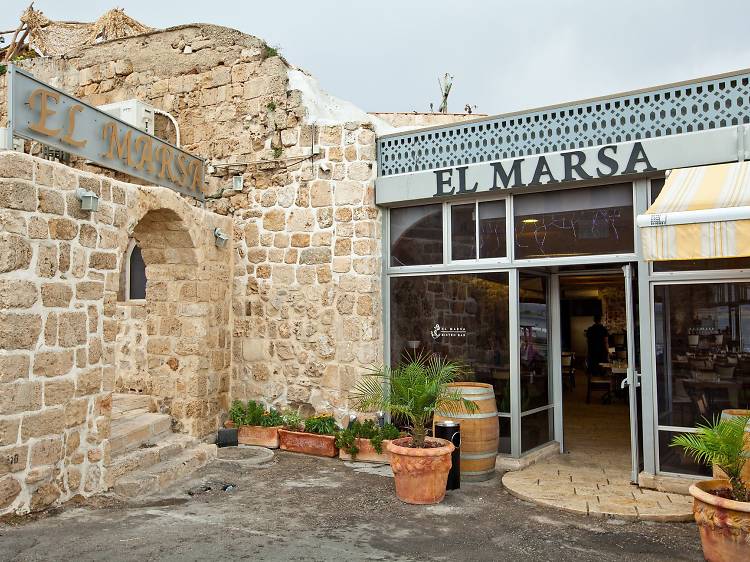 Residing on Akko’s port, El Marsa’s atmosphere is a unique blend between old and new; its modern decor contrasts beautifully with the ancient architecture of this converted 13th-century home. Its Arabic dishes have both eastern and western influences, with an original twist on traditional Middle Eastern cuisine. And its diversified menu offers fresh-from-the-water seafood caught right at the port next-door. Enjoy fresh calamari rings, the latest catch of the day, or creative desserts such as Halva Mousse, as you overlook the tranquil Mediterranean Sea.
Read more
Advertising 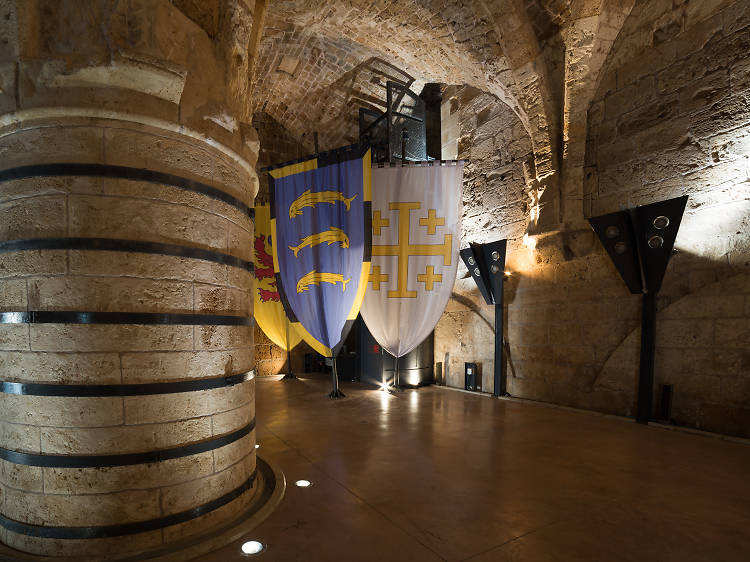 Steps away from the Haifa Bay lies an ancient stone building, which has served as a citadel, hospital, and gathering space throughout history. Knights Hall, a complex within the Old City of Akko maintains its Hellenistic facade, while also serving as a venue space for concerts and tours today. There’s nothing like visiting a spot within a UNESCO World Heritage Site, so if you’re in Akko, stop by Knights Hall to explore during the day or see a performance at night.
Read more 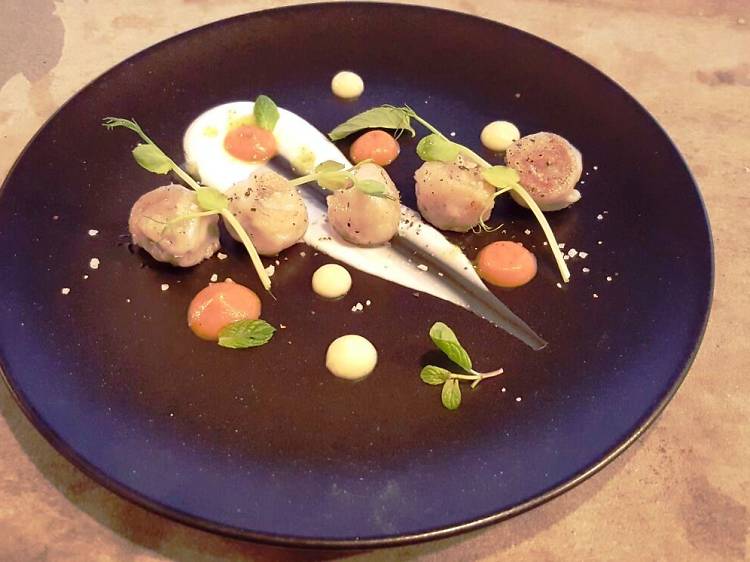 This charming, intimate gem was created by Italian-trained Omri Shahar who ensures that each dish is made with the finest and freshest materials. Everything is handmade, from the balsamic vinegar to the scrumptious pasta. And several of the dishes are cooked in a wooden oven, creating a wonderful aroma that permeates both the small, cozy rooms filled with Italian art and the lively corridor within Akko’s Turkish market. The menu suits both meat-lovers and vegetarians. Its highlights include baby calamari with yogurt and herbs, fried artichokes and fish on polenta.
Read more
Advertising 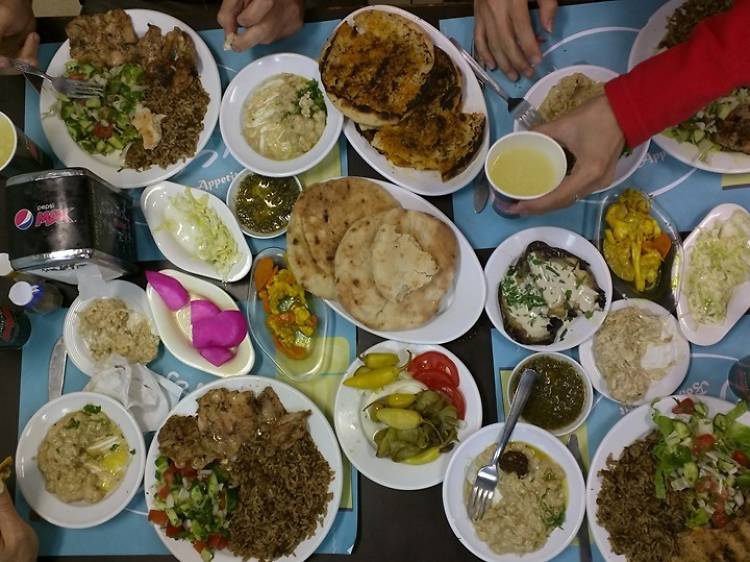 One of the hottest debates within the Israeli foodie scene is – you guessed it – where to get the best hummus in Israel. For many, Hummus Said takes the cake. Their hand-mashed hummus is in a league of its own. It boasts a tangy flavor and a soft, creamy texture that seamlessly melts in your mouth. Expect long lines and a chaotic scene - hummus fanatics come from far and wide to sample their secret recipe. Once their homemade pita, classic hummus or makhlouta hits your tongue, you’ll see what the hype is all about. Pro tip: when it’s super crowded, go through the back door to be seated more quickly!
Read more 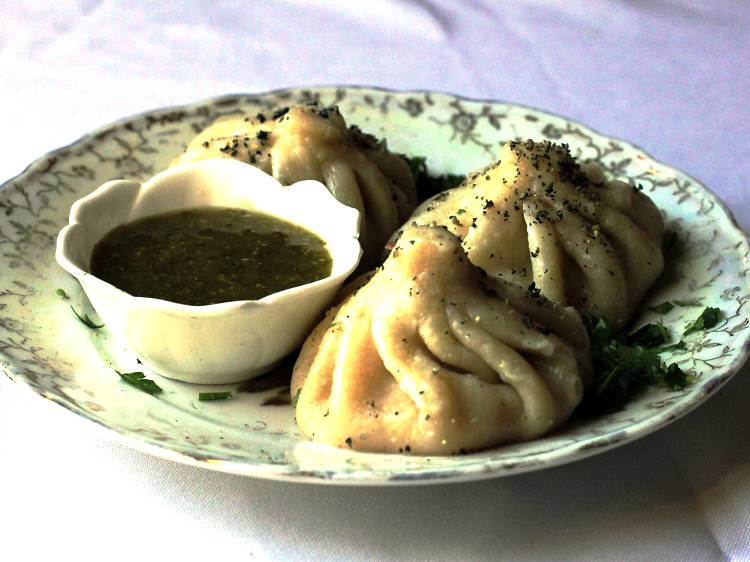 This unforgettable restaurant transports you right to Georgia, with authentic Georgian decor and a warm, cozy atmosphere. Shota is one of the few restaurants where you truly cannot go wrong - whether you sample the Khachapuri with cheese and spinach, the Khinkali or the Hinkali, you’ll swear you ordered the best thing on the menu. Each plate bursts with authentic flavors that will excite all your senses. Don’t forget your dancing shoes – Shota’s owner is famous for playing traditional Georgian music that has the entire restaurant dancing and celebrating.
Read more
Advertising 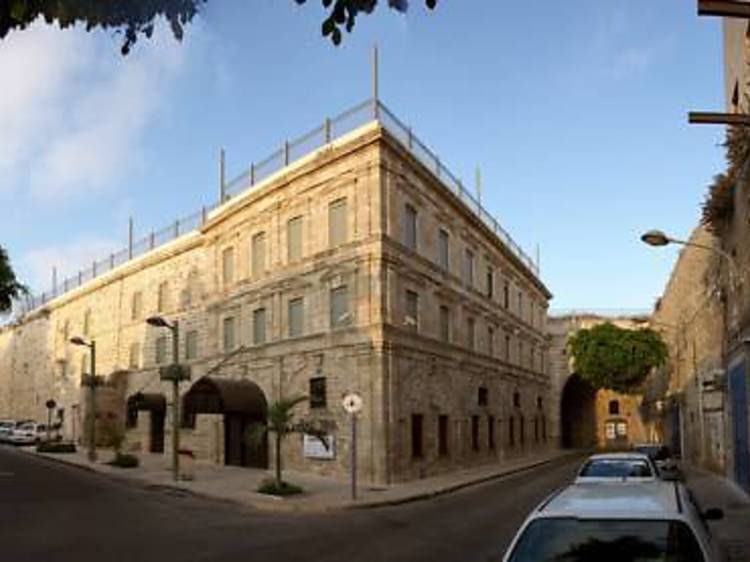 Built into Acre's city walls, the Akkotel-Boutique Hotel is just 50 metres from the seafront. It features a roof terrace with Mediterranean-Sea and Old-City views, and rooms with vaulted ceilings.Rooms at the Acre Akkotel are air conditioned and come with free Wi-Fi, LCD satellite TV, a fridge and a private bathroom. Each is uniquely furnished and maintains the original stone walls.The Akkotel-Boutique’s restaurant serves Mediterranean cuisine. An Israeli breakfast is served each morning.The Akkotel Hotel is a 5-minute walk from Acre Marina. The Treasures in the Wall Museum is 200 metres away.
Read more
Check prices 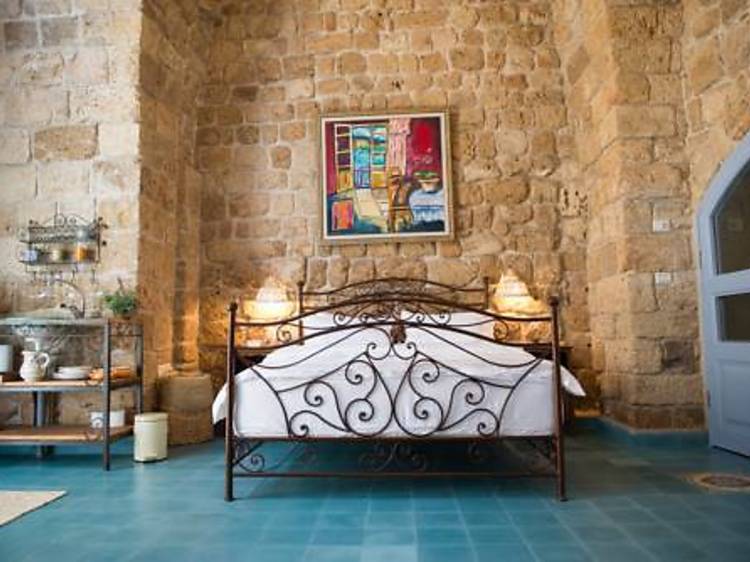 14. Arabesque: An Arts and Residency Center in Old Acre

Arabesque: An Arts and Residency Center in Old Acre is located in the heart of the Old City of Acre, 2 minutes' walk from the marina. WiFi is free throughout. All with original stone walls, rooms here are equipped with a flat-screen TV with satellite channels. Certain units feature a seating area to relax in after a busy day. You will find a kettle in the room. All rooms are fitted with a private bathroom. There is concierge service at the property.
Read more
Check prices
See more things to do in Akko
Show more
Recommended