Get to know Las Vegas district by district—the best local restaurants and bars, arts and entertainment and things to do on, and off, the legendary Strip

When he built the tropical-themed, volcano-fronted Mirage in 1989, Steve Wynn lit the fuse on a renaissance that would see Las Vegas Boulevard virtually rebuilt within 15 years. The city awoke from a long dormancy—the years when it was popular with those slightly embarrassing friends of your parents'—and began to deal in high-volume density. Soon populist attractions began to spring up all along the Strip (effectively the stretch of Las Vegas Boulevard South between the classic 'Welcome' sign and Sahara Avenue). Now glitzy high-rise hotel-casinos such as the Cosmopolitan have dwarfed earlier giants like Bellagio, and old Vegas's neon has given way to brighter-than-bright LED screens. As Vegas goes vertical, it seems the entire ethos of the city is shifting as well.

For a private pink Cadillac tour of Las Vegas with Elvis, click here.

Restaurants and bars on the Strip 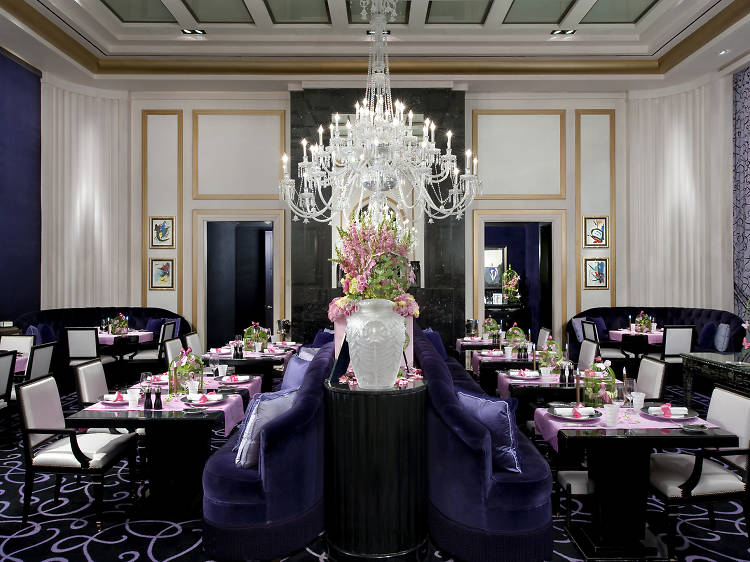 Fine dining is alive and very well inside the “mansion,” a fitting nickname for Chef of the (last) Century’s opulent Michelin three-star restaurant just off the MGM Grand casino floor. The honorific was awarded by prestigious French culinary guide Gault & Millau in 1989, and as you’d expect, a meal inside Joël Robuchon’s jewel-hued rooms is a once-in-a-lifetime event, so opt for the full experience. The 16-course parade of transcendent French cuisine takes more than three hours, makes ample use of caviar, black truffles and foie gras and won’t leave you contemplating a slice of pizza on the way home. There simply is no dinner more decadent on the Las Vegas Strip. 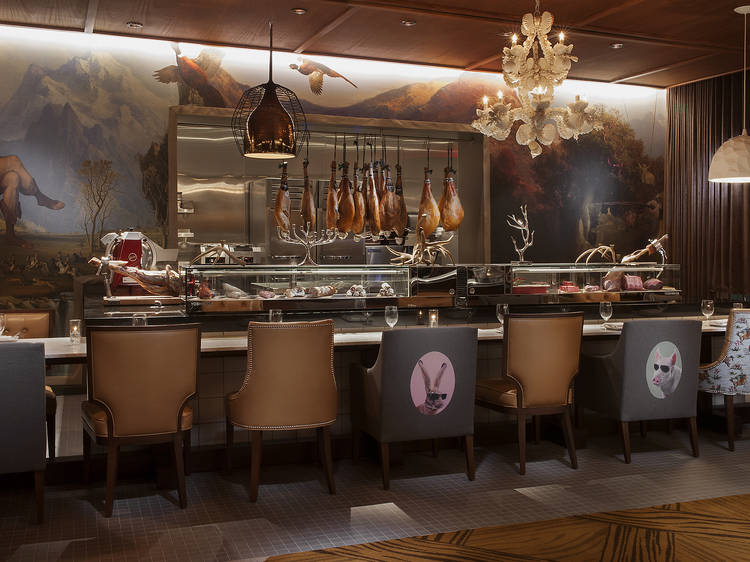 Don’t call it a steakhouse. According to superstar chef José Andrés, this Philippe Starck–designed restaurant at SLS is a “meathouse,” dedicated to celebrating the bounty of the earth, be it in the form of A5 Kobe straight from Japan, Finnish caviar, or even leeks with charred chipotle sauce. The ingredients—sourced so carefully the R&D team tried more than 500 cuts of meat before opening—are the stars here, but the chefs still have fun showing them off. That means foie gras is offered wrapped in cotton candy and dishes like the classic steak tartare are mixed tableside with plenty of panache. Don’t skip the suckling pig, imported from Spain and served by the quarter. You’ve never had such succulent swine. 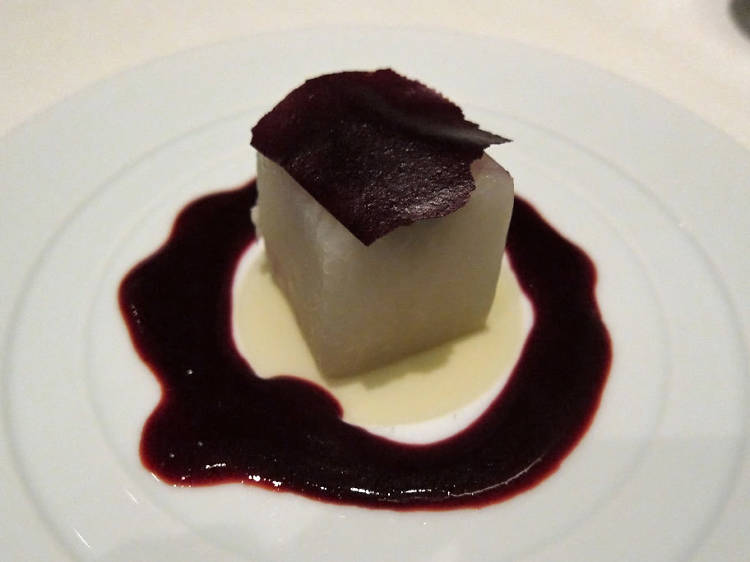 Created by legendary toque Guy Savoy with Julien Asseo presiding over the kitchen, this is among the most expensive dining rooms in Vegas. However, it’s worth every penny, providing a level of culinary sophistication rarely glimpsed here. Highlights include the signature artichoke and black truffle soup served with toasted mushroom brioche, and the black truffle menu, which shows a liberal hand with the highly prized ’shrooms. If you have the cash, try the 13-course innovation-inspiration menu or pony up for the Krug chef’s table, where you’ll indulge in a 10-course feast inside the kitchen.

Things to do on the Strip 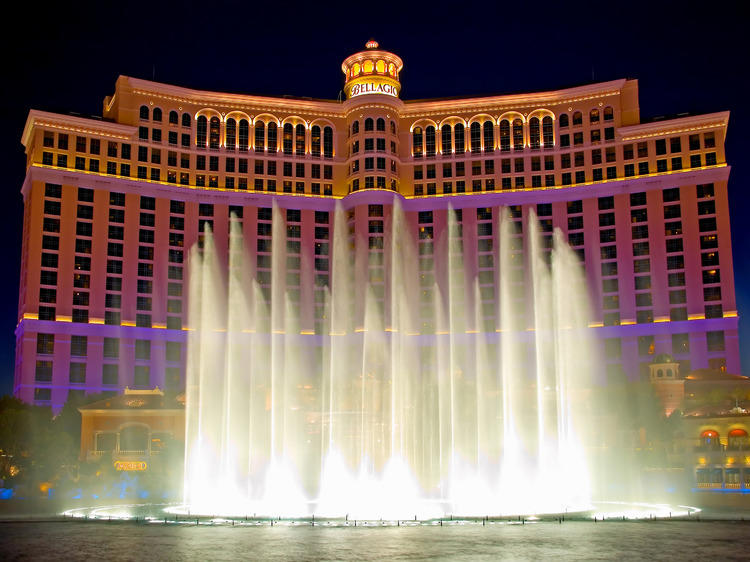 The Bellagio's lake throws up entrancing fountain displays choreographed to music from Pavarotti to Sinatra (and, less appealingly, Lee Greenwood). The 1,200 water cannons, arranged in lines and circles, shoot water that dances and sways to the music, reaching as high as 240ft (73m). The best seats are in the Bellagio restaurants, but you get a good view from the sidewalks out front, and from the top of the Eiffel Tower at Paris Las Vegas. 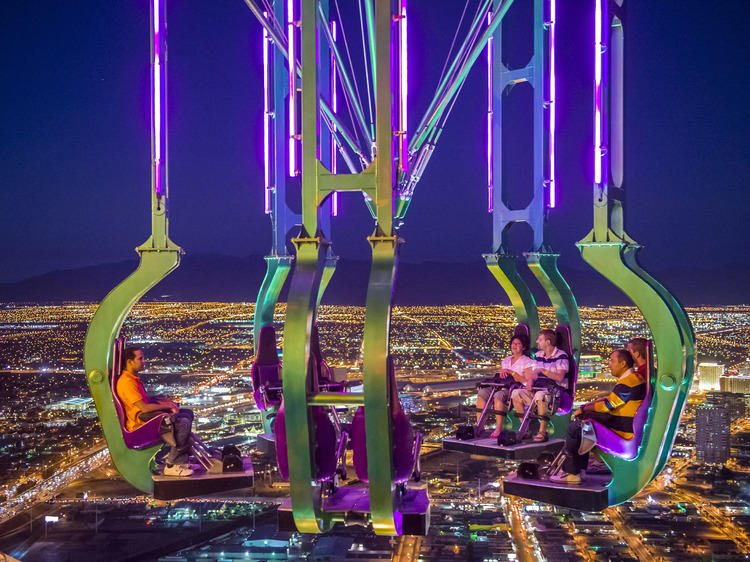 If you're afraid of heights, stay away from the 1,150ft (350m) Stratosphere Tower. And even if you don't suffer from vertigo, you might want to steer clear of the resort's thrill rides. The Big Shot will rocket you 160ft (49m) up the tower's spindle under a force of four Gs; at the top, you'll experience a moment of weightlessness before free-falling back to the launch pad. X Scream will propel you headfirst 27ft over the edge of the Tower and then leave you there to dangle. And during Insanity, an arm will extend 64ft (20m) over the edge of the tower and spin you around at a terrifying rate. Best save dinner for later. 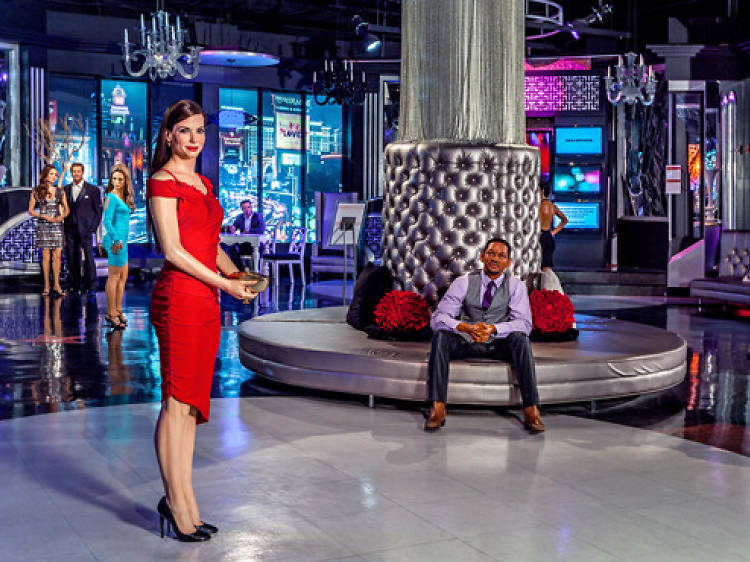 The first US incarnation of London's all-conquering attraction contains more than 100 wax celebs in various settings and rendered with various degrees of accuracy (Johnny Depp good, Shaquille O'Neal less impressive). The comparatively small attraction tones down the British history in favor of celebrity and pop culture "encounters": a photo opportunity to don a wedding dress and "marry" George Clooney, for example, or a chance to sing in front of Simon Cowell. Hokey but fun.

Casino highlights on the Strip 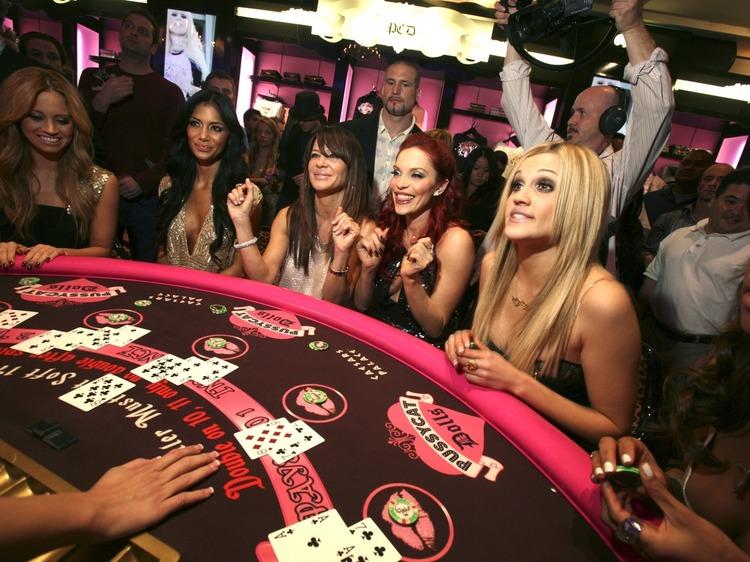 Few casinos offer the limits or the atmosphere of Caesars; when there’s a big fight in town, limits on the main floor can go through the roof. The sports book is one of the liveliest spots to watch the action, and accepts some of the biggest bets. You get a good view of the baccarat pit, an intimate nook where huge wagers are common. And for the boldest of slot players, the $500 machine, with a $1 million jackpot, uses gold-plated tokens. 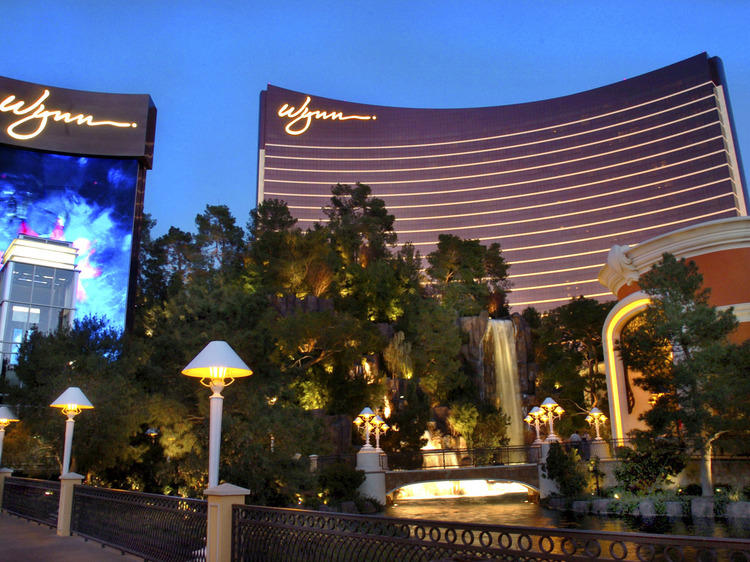 As you might expect, the action at Wynn is both sophisticated and decidedly pricey. Blackjack minimums start at $15, with a few single-deck games that pay the reduced 6:5 for naturals; hotel guests can also play 21 poolside at the Cabana Bar. Craps minimums are similar to blackjack. A single-zero roulette wheel is usually open in the high-limit room, though the minimums are high. The slots run the gamut from pennies to a $5,000 machine. 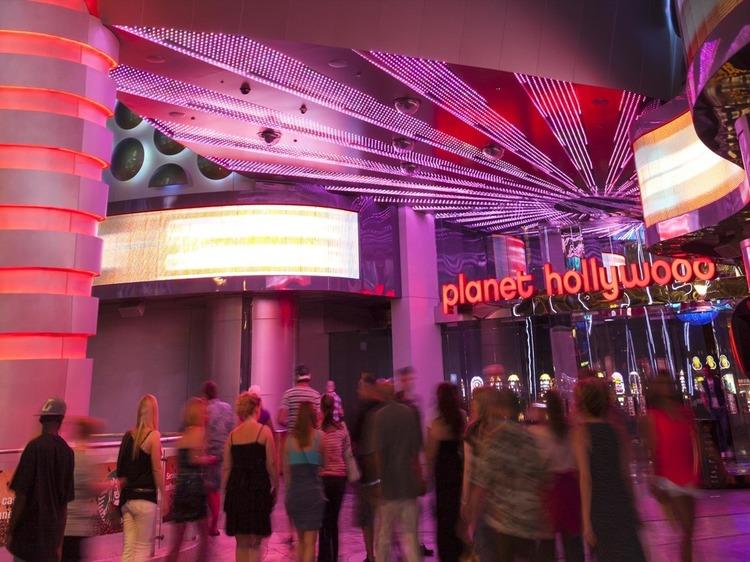 Hotels and resorts on the Strip 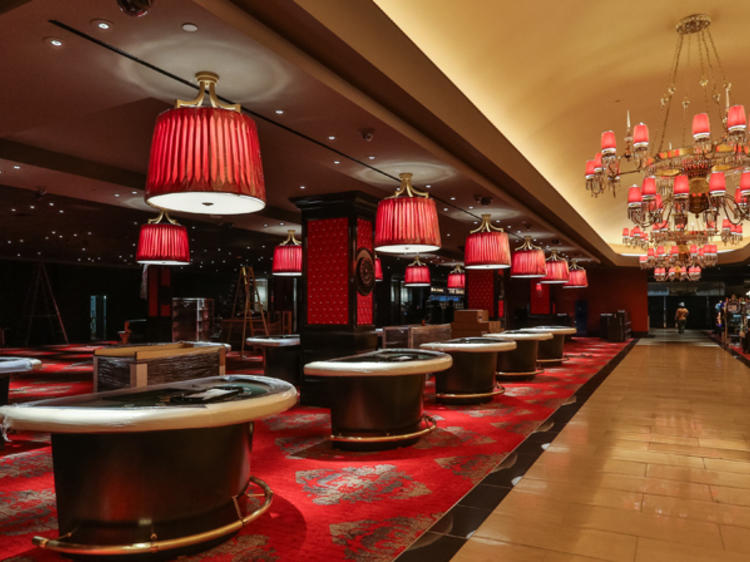 The newest hotel on the Strip could’ve ripped a page straight out of old-school Vegas’s playbook. Not only is the Cromwell, situated on the desirable intersection of Las Vegas Boulevard and Flamingo Road, a small, classy hotel, but it also went through a last-minute partnership change—reportedly due to some untoward business dealings—before parent company Caesars Entertainment stepped in and righted the ship. 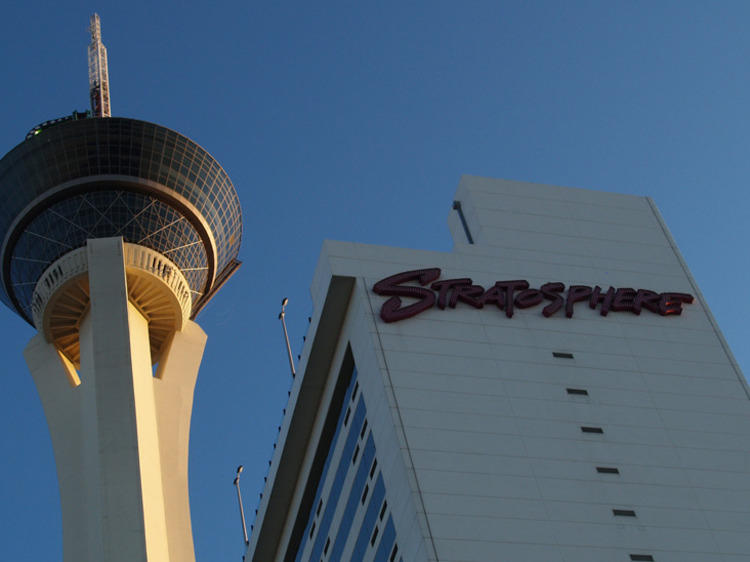 Guestrooms in the tower would be interesting, but all the Stratosphere’s sleeping quarters are in separate buildings below. Some are in the original Vegas World mid-rise; a more recent tower brought the total to 2,444 rooms and suites. There are an overwhelming 13 different types of room, from the smallish standard rooms to the massive "premier suites". On the eighth floor, there’s a big pool and recreation deck. 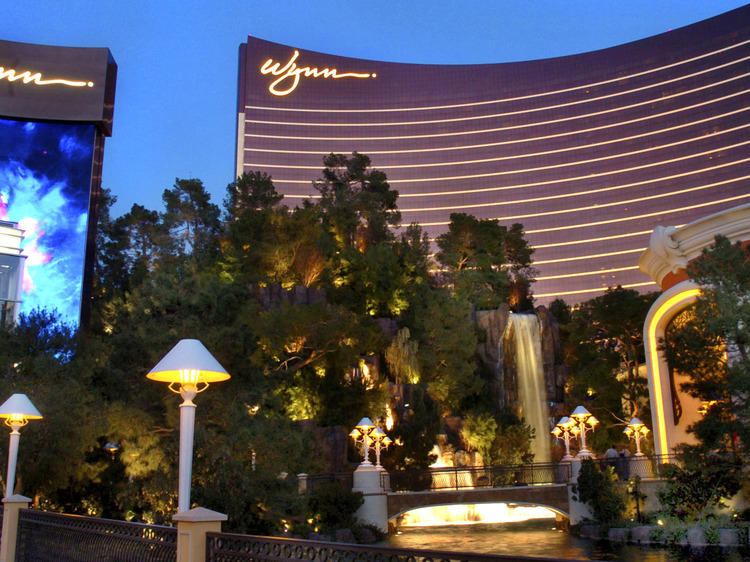 The large and lavish (naturally) guestrooms offer floor-to-ceiling windows, signature Wynn beds with 320-thread-count European linens, a seating area with a sofa and ottomans, a dining table and chairs, flatscreen LCD TVs, spacious bath areas and bedside drapery controls. The suites set a new Vegas standard: some have their own massage rooms, VIP check-in areas, private pools and dining rooms. Don’t even get us started on the villas.

Music and nightlife on the Strip 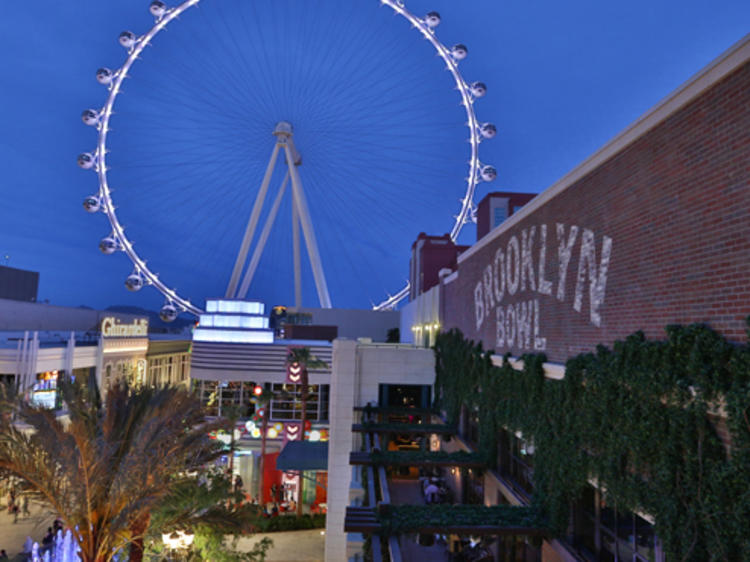 Midway between front and back of the Linq is the third location of this bowling alley-cum-music venue born in the NYC borough. BBLV’s opening provided a powerhouse of nightly music options to Vegas—an eclectic mix never before seen on the Strip, ranging from alt-rock godfathers Jane’s Addiction to jam band Leftover Salmon to hardcore rap pioneers Wu-Tang Clan, and everything else in between. Before the show, grab a bite at an outpost of popular New York eatery Blue Ribbon, known for its fried chicken. Of course, you can also bowl—and drink—here. 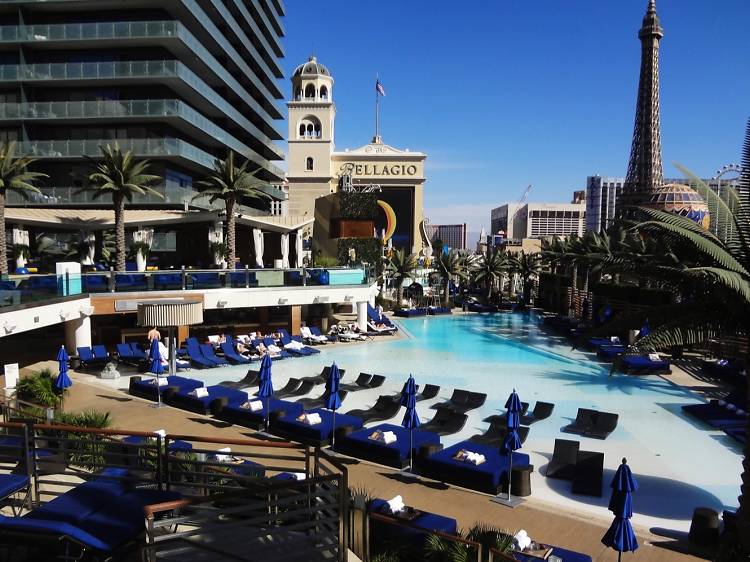 The Cosmopolitan started hosting live musical acts at Marquee before it realised what a gem it had in the Boulevard Pool. The logistics took some retooling, but the hotel-casino now features regular bands on a specially designed stage that overlooks its fourth-floor open-air pool. The music is varied—Hot Chip, Gary Clark Jr, MGMT—and the sound system (and experience) is beyond superb. Enjoy top-notch music overlooking the Strip, and don’t worry about the view: the bands are broadcast on to a four-storey screen adjacent to the pool. Best Las Vegas music experience, hands-down. 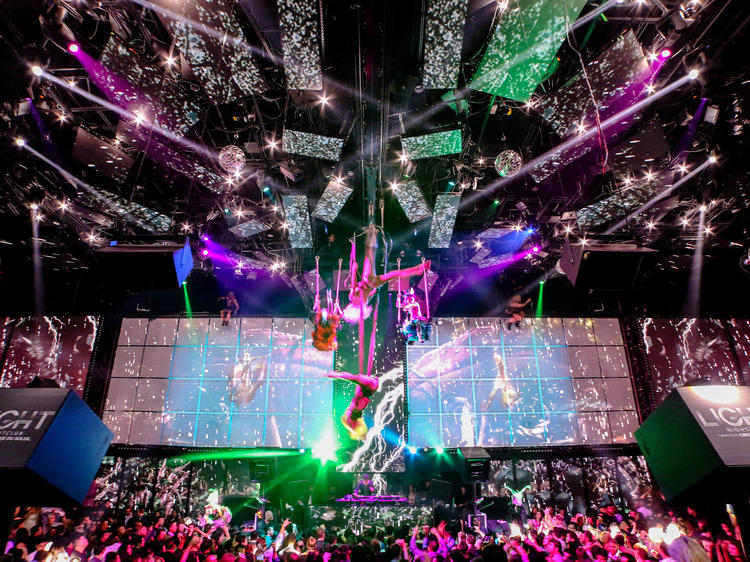 This club of the same name used to be located inside Bellagio, before operators the Light Group teamed with Cirque du Soleil (in that company’s first-ever nightclub venture) and moved the show down the road to Mandalay. Tiered balconies surround an intimate dancefloor, while DJs spin from a small, elevated stage smack in the middle of it. For added effect, Cirque performers wow the crowd, crawling across sprawling walls of LED screens or swinging from the ceiling like the proverbial residents of an asylum. We mean that in a good way.

Shopping on the Strip 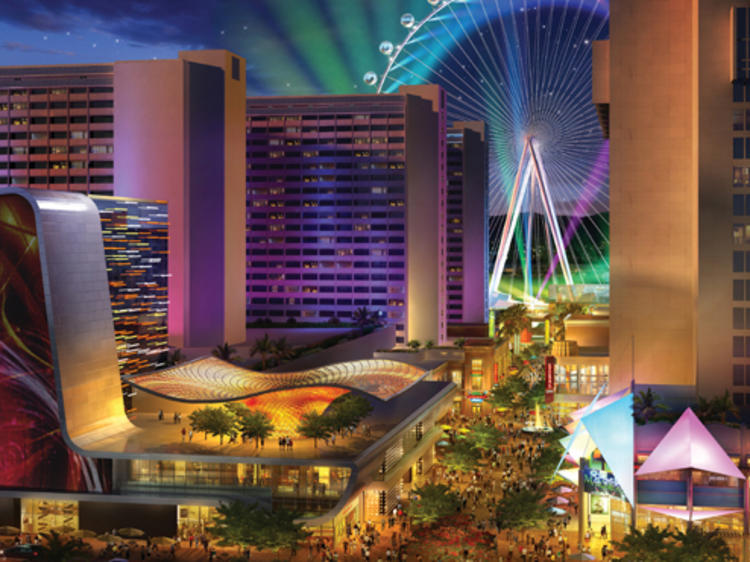 Combining an open-air shopping mall with a live-music mecca and a supersize Ferris wheel with dazzling views, the Linq is one of the latest additions to the Strip. Sandwiched between the Quad Resort & Casino and the Flamingo, the outdoor playground is a bit narrow, which can make for crowded passage, but it stretches the length of three football fields with a zigzag in the middle that makes it impossible to see from one end to the other. 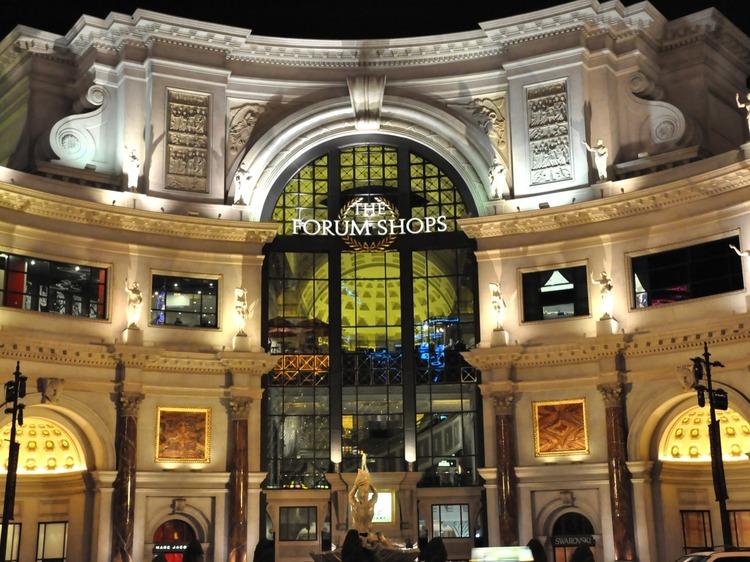 Sure, it might be trying too hard with the faux-Roman vibe – classical pillars, statues, huge replica of the Trevi Fountain – but with more than 160 boutiques and shops under its trompe l’oeil, always-twilit Italian sky, the Forum Shops rakes in a whopping $1,300 in sales per square foot each year, the nation’s highest per-square-foot revenue. And that’s a lot of square feet. 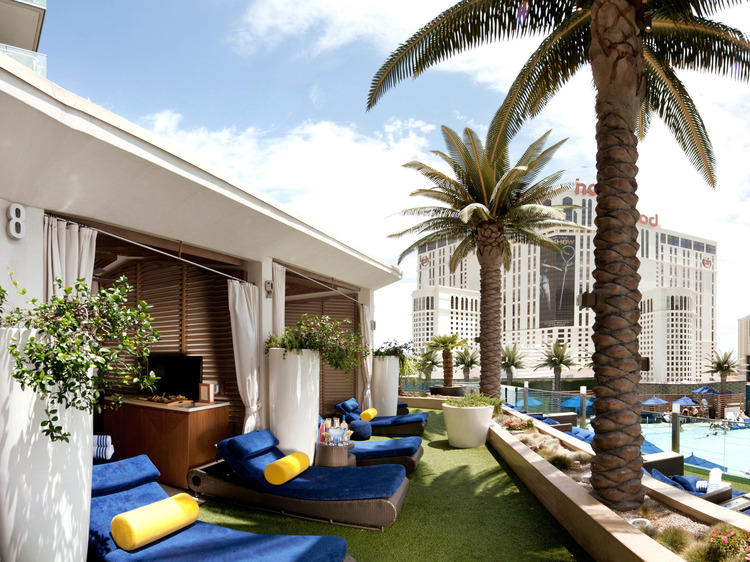 The Cosmopolitan set out to be different from anywhere else in Las Vegas, and it has achieved this goal with style, sophistication and wit. The choice of the international and hip, as well as chic locals, Cosmo attracts a younger, more urbane crowd. The vertical layout (three storeys, centred around a chandelier that even Liberace himself couldn’t have envisioned) is studded with unusual shopping options, including Amsterdam’s outré, avant-garde Droog assemblage of conceptual furniture.