The best marijuana dispensaries in Vegas

Like everything in Sin City, the best dispensaries in Vegas are over-the-top entertainment complexes

The entertainment capital of the world celebrated its first recreational marijuana sale on July 1, 2017, in true Vegas fashion: with fireworks. Since then, the number of dispensaries in Vegas has exploded to more than 50, with the highest concentration on or near The Strip.

As is usually the case in Vegas, bigger-is-better tends to dominate the dispensary scene. Indeed, the city boasts the largest dispensary in the world, Planet 13. Not to be left behind, other dispensaries wow with interactive displays, cannabis kitchens and spa-like environs.

To purchase cannabis in Las Vegas you must be at least 21 years old, have identification such as a valid driver’s license or government-issued card, and bring cash since most banks won’t work with dispensaries. You’ll also want to be careful where you light up. Smoking or using in public – including casinos and hotel rooms – carries a fine of up to $600.

RECOMMENDED: Full guide to the best things to do in Las Vegas 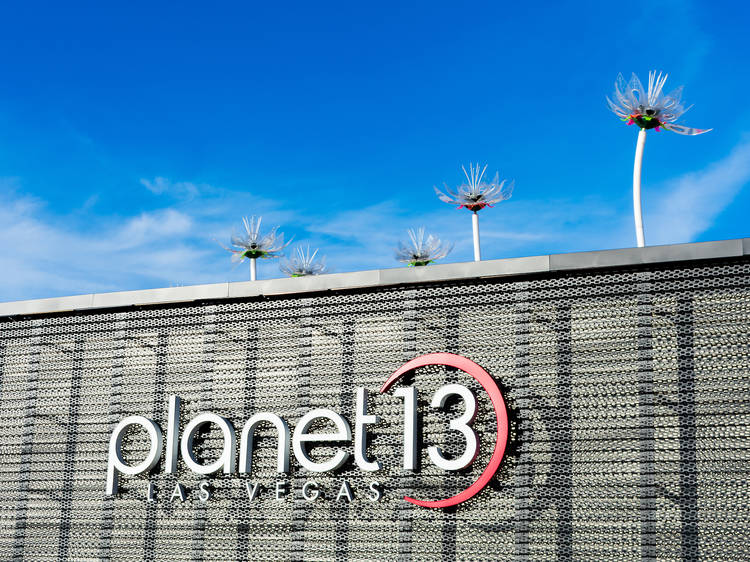 At roughly half the size of a Walmart, this ‘cannabis entertainment complex’ is the largest dispensary in the world. Watch for the 15-foot-tall LED lotus flowers on the dispensary’s roof, which stand out even among Vegas’ bright lights. As you enter, spend a few minutes stepping on the interactive floor behind check-in, or follow mechanical butterflies through the hallways, past the site’s restaurant, coffee shop and vendors. The main retail space features colorful orbs floating overhead and 85 budtenders. But that’s not all. You can watch gummies, chocolates and other treats being made through a glass window looking into Planet 13’s kitchen. Soon you’ll be able to tour Cannabition, an interactive cannabis museum.

THRIVE Cannabis Marketplace is one of the premier dispensaries in Nevada, offering competitive pricing on top brands like Pistola and Cookies. The dispensary also boasts some of Vegas’ best cannabis discounts and a points system that rewards you for every dollar spent.

Inside, the sleek retail space features white walls adorned with the dispensary’s logo, a cannabis leaf against a green hexagon. Already know what you want? Place an order at a kiosk and wait for staff to bring it out to you.

One of the most popular cannabis brands in the world, Cookies sells its best strains, from Girl Scout Cookies to Gary Payton, at its Vegas location on The Strip. The vibe is what you’d expect from the brand’s founders, hip-hop artist Berner and grow expert Jai. Large, Vegas-inspired pop-art posters line the walls between product displays, and blue neon accents reflect in the mirrors on the ceiling. Don’t be surprised if you have to stand in line to get inside or spot a celebrity making a purchase.

Just minutes from The Strip, this free-standing dispensary grows its own flower brand and produces its own concentrates, oils and edibles. But like many Vegas dispensaries, a visit here is just as much about the experience as it is about product. Inside, there are graffitied brick walls, chandeliers overhead and open car trunks displaying product. The atmosphere is fun and laidback. Acres’ Open View Edibles Kitchen, where chefs demonstrate how to make edibles, adds to the fun as does the onsite marijuana museum.

Las Vegas ReLeaf carries just about any cannabis product you can think of, from buds and pre-rolls to THC-infused beer. In fact, the dispensary stocks a full lineup of cannabis-infused beers, wines, spirits, tea, soda, elixirs and coffee. Getting hungry? Try a brownie or even a macaron.

Whatever product you decide on, you can have it delivered for free anywhere in the Las Vegas area, including Summerlin, Anthem, Centennial Hills, Henderson, and Paradise. Better yet, LasVegas ReLeaf is one of the most affordable dispensaries in the area with most of their buds starting at $15 per gram.

This upscale dispensary specializes in high-quality cannabis products and a luxury shopping experience. Think of it as the Louis Vuitton or Prada of cannabis dispensaries. Brightly-lit cases contain flowers, pre-rolls, vaporizers, concentrates and edibles with additional products stored in wood drawers along the wall behind the register. Above, screens display current offerings and the latest deals.

While welcoming to anyone, Jardin definitely appeals to a more sophisticated clientele. The staff is knowledgeable, professional and friendly, willing to spend time with first-time and experienced users alike.

Filled with plants and decorated with wood accents against a white background, Pisos Las Vegas has a spa-like feel that quickly puts customers at ease. On the menu, you’ll find more than 50 of the highest-quality cannabis strains on the market as well as a wide variety of products ranging from pre-rolls to edibles. Pisos also has its own line of balms, bath salts and lotions and boasts a Herer Cannabis Cup award for its Jack Herer Concentrate. Need another reason to visit? Pisos’ educated budtenders rank among the best in Vegas. 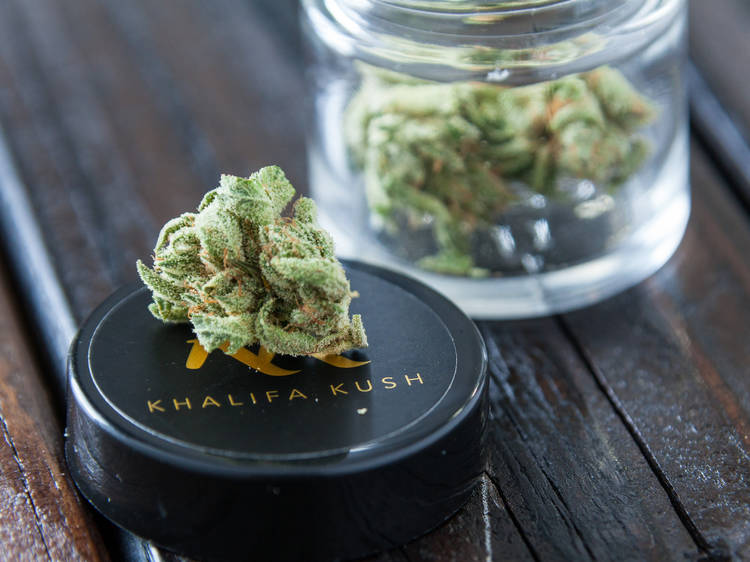 Open 24 hours a day, seven days a week, Reef’s flagship location near The Strip is more than just a dispensary – it grows and produces its own product and is the exclusive cultivator of Wiz Khalifa’s Khalifa Kush. In addition to its own line of products, Reef Dispensaries carries Exotics by Berner, a premium strain by hip-hop artist Berner, who also helped create the dispensary’s menu.

While most of the 165,000-square-foot facility is dedicated to production, the dispensary's retail section resembles an Apple store, with low wooden tables and a minimalist aesthetic. The flagship location is one of two Reef Dispensaries in Las Vegas; the other is located in North Las Vegas on Cheyenne Avenue.

The first dispensary to have a cannabis tasting room in Las Vegas, NuWu Cannabis Marketplace’s two locations are also Vegas’ only drive-thru dispensaries. Inside, NuWu sells 200-plus brands and more than 1,100 products, from flowers to CBD oils.

Unlike most dispensaries, you don’t have to leave the property to enjoy the product. Just make a reservation for the dispensary’s tasting room, and with the purchase of a table package, you’ll have your choice of products and consumption options such as bongs, and cannabis-infused mocktails and snacks. Each seating is 90 minutes. 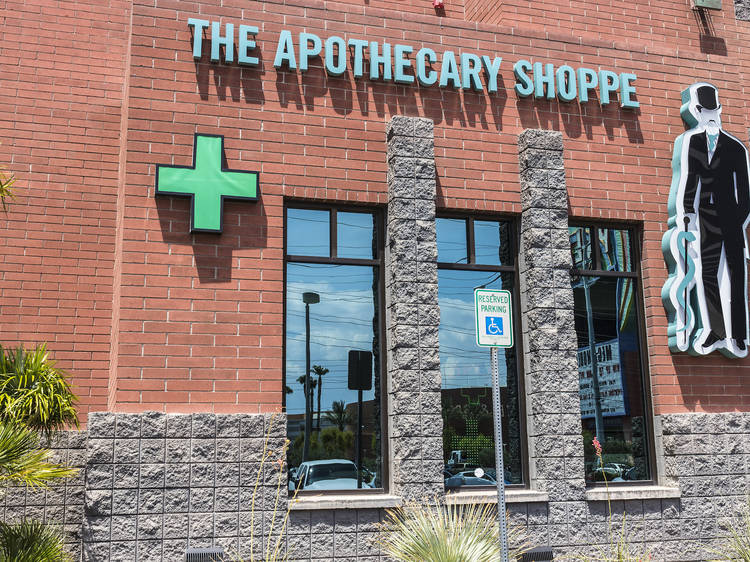 You’ll feel like you stepped back in time when you enter this award-winning dispensary across from the Palms Casino. Bronze metal tiles cover the ceiling, and wood display cases line the walls. Meanwhile, well-dressed budtenders man the display cases in the center of the room, answering questions and offering suggestions.

But its speakeasy vibe isn’t the only draw. The Apothecary Shoppe boasts one of the widest selections of premium edibles in Las Vegas. Not only can you purchase rice crispy treats and brownies but praline truffles, infused dried fruits and custom cakes. There are even edible options for diabetics.