My Account My Profile Sign out
My Account
Search
Worldwide Europe United Kingdom England London Ava DuVernay: ‘Why is a guy who sells weed on a street corner in prison for 25 years?’
Advertising

Ava DuVernay is talking to me on the phone from New Zealand where she’s just about to shoot the biggest film of her career. In fact, the Disney adaptation of the children’s book ‘A Wrinkle in Time’ starring Oprah Winfrey and Reese Witherspoon won’t just be the biggest film of DuVernay’s career (she’s best known for directing the Martin Luther King drama ‘Selma’), it’ll be the biggest film ever to be directed by a black woman full stop. ‘I’m used to working with two dollars and a paperclip,’ she laughs – not sounding a bit like she’s feeling the pressure of a $100 million budget.

But the reason for our conversation today is the documentary that the 44-year-old Californian has been making for the past two years on the sly. ‘13TH’ is a Netflix film examining the history of racial inequality in the US and the way in which the justice system has been skewed against black men since the abolition of slavery (the title refers to the thirteenth amendment of the constitution, which abolished slavery but exempted from freedom those guilty of crimes). The film is especially concerned with how, in the past four decades, the number of black men in jail has skyrocketed (people of colour account for 30 percent of the US population and 60 percent of the prison population). Packed with facts and interviews, ‘13TH’ is impassioned, important and timely.

You’ve called ‘13TH’ a ‘secret’ documentary, and you made it without telling anyone. Why?
‘Well, there’s always pressure around announcing something in Hollywood – and this wasn’t that sort of movie. It wasn’t a career move. No one is getting rich from it. This was a story I wanted to explore and investigate. I just thought it would be cool if people could find all this information online in one place. Some people in the industry were even saying to me, “Why would you do that after ‘Selma’? A doc about what?”’

And what was your answer? Why did you decide to make ‘13TH’?
‘I had been thinking about it for a while. I grew up in Compton in Los Angeles. I saw first-hand a lot of the issues that we explore – the way that black communities are policed. I was an African-American Studies major at UCLA, so I was able to dive deep into some of the history. I’ve always been an admirer of filmmakers who make docs around this subject, and I always thought: what if there was a primer that pulled all of this together? It felt like it was something I could do. You do it because it’s important. You do it because you have to.’

Did the Black Lives Matter movement make it feel like an especially urgent story to tell?
‘After shooting “Selma”, I was in the cutting room editing the movie when Ferguson was happening. We were cutting footage of Martin Luther King reacting to the death of Jimmie Lee Jackson in 1965 and seeing him marching, protesting and resisting. Then we were seeing the same thing with Michael Brown [who was shot dead by a police officer in Ferguson, Missouri in August 2014] and the people of Ferguson marching, protesting and resisting. The parallels illustrated how far we have not come.’

You include footage of police killings in 2016. Why? To make it as current as possible?
‘Yes. This summer in the States, we’ve had some very high-profile videotaped cases of police aggression and of people being murdered in cold blood. I’m happy that the doc can come out and provide some context about who we regard as criminals and why. Why is a white-collar criminal who steals millions of dollars not in jail and yet the guy who sells weed on a street corner is in prison for 25 years?’

‘13TH’ will be released on Netflix. Was making it accessible important?
‘Oh yeah, very important. That was a choice. I chose to make this film with Netflix for that reason. I feel like this is an evergreen subject that will be relevant for many years. Documentaries are a form that should be at our fingertips and Netflix has a global reach. It can get the story out there so that it’s used and referenced.’

So if ‘13TH’ came out in a handful of cinemas it would only reach the elite?
‘Yes. I grew up in Compton, Los Angeles, and there are no movie theatres in Compton. When “Straight Outta Compton” came out, you couldn’t see it in Compton. It was the same with “Selma”. Selma is a black community with no movie theatres. You couldn’t see “Selma” in Selma. There’s a kind of segregation going on where you can’t see the films unless you drive out away from your own home. People don’t do that, and you end up having a dearth of images about yourself. When I got to UCLA, film was a big part of me trying to open a window on the world.’

There was controversy in 2015 when ‘Selma’ got just two Oscar nominations. In retrospect, do you think some good came out of that frustration? It really helped to kick start the #OscarsSoWhite movement.
‘I think other people had more frustration than me about that! It sparked what it sparked. I think some good has come out of it, which is people talking about issues and continuing to challenge the industry’s inherent structure, which privileges some and disadvantages others. That’s a good thing to look at and talk about. It’s not a frustration to me. I said all along what I thought the film’s prospects were, and I was right. So I wasn’t as upset as some people. But I hope the film continues to spark conversation.’

‘13TH’ is being released in October, a month before the US presidential election. Was that the plan?
‘No. I didn’t think the film was going to take me as long as it did. It took a little over two years. I didn’t plan for that. But when we realised we’d need an extra year we thought: Let’s have it out before people make their decisions. It became important to finish it in time.’

The film is critical of Donald Trump. But you don’t give Hillary Clinton an easy ride either. You show footage of her talking about ‘super-predators’ in the 1990s, referring to black criminals, and inform us about her support of Bill Clinton’s 1994 crime bill, which sent incarceration rates soaring, especially among people of colour.
‘Oddly enough, there was no stretching required to include the two candidates. They both play a key part in the story, you know? Donald Trump took out full-page ads [in 1989, in four newspapers] calling for the death penalty for five boys of colour [who were wrongly accused of murder]. And, yes, there was Ms Clinton’s talk of “super predators” and her support for the 1994 crime bill. Even Bill Clinton has now said that the bill was wrong.’

Where did you feel your responsibility lies in terms of endorsing a particular candidate?
‘I took care to make sure I included the part that each candidate played without telling you [how to vote]. They are both complicit in certain areas. It’s not my job to raise a hand for one or the other. But I did try to show as evenly as I could where they both were on the topic 20 years ago and where they are now. It’s up to the audience to decide.’

‘13TH’ has its European premiere as the Time Out gala at the London Film Festival on Thursday October 6 and will be on Netflix from Friday October 7.

Find out more about the London Film Festival 2016 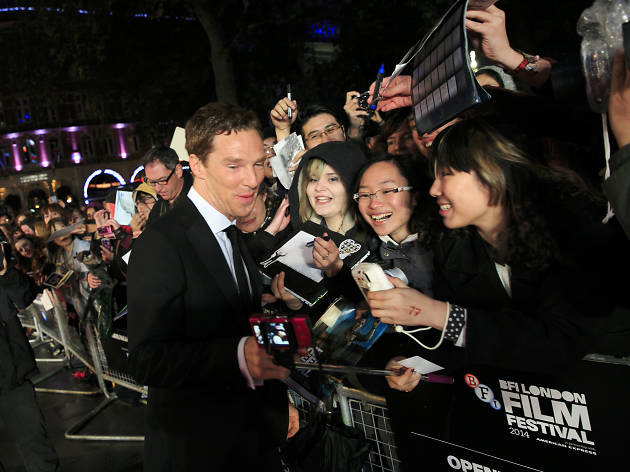 Your full guide to the London Film Festival 2016