1. The penny drops (even if the acid doesn’t)

Originally a locomotive warehouse, the Roundhouse building came into its own in 1966 when the dirty, derelict space was sneakily used for the launch of underground newspaper International Times. Back then, you could be legitimately countercultural by doing amazingly childish things. Naked people writhed around in a giant jelly, Paul McCartney came dressed as a sheik, Marianne Faithful as a sexy nun. Despite the presence of Pink Floyd, the general consensus was that the party wasn’t exactly a banger – just two loos served 2,500 people, and even the acid sugar cubes didn’t have any actual acid in them. All the same, a radical seed was planted.

A who’s who of ’60s counterculture flocked to the Roundhouse in 1967 for the now-legendary Dialectics of Liberation conference. The intention was to explore the root of human violence. Revered beat poet Allen Ginsberg, dressed in a red shirt hand-painted by Paul McCartney, oversaw a heated debate where Black Power leader Stokely Carmichael agitated for direct action and dismissed the rest of the panel’s more hippy ‘flower power’ tendencies. All the while San Franciscan anarchist Emmett Grogan managed to troll everyone by reading from Hitler. Which, shockingly, nobody clocked.

The Doors arrived in the UK in 1968 for two heavily hyped shows at the Roundhouse. During the gigs, mesmerising frontman Jim Morrison switched from heckle-baiting lethargy to primal screaming electricity, all to a backdrop of spiralling psychedelia. In true rock-diva form, he also refused to sing ‘The End’ until all the lights had been turned off, creating a technical nightmare for the TV crew trying to film the show. It wasn’t the only legendary gig: Pink Floyd, The Who, Jimi Hendrix, Led Zeppelin, John Lee Hooker, Fleetwood Mac, David Bowie, T Rex, Elton John and The Rolling Stones all played there between 1966 and 1971.

The UK abandoned theatre censorship in 1968, meaning stages were immediately flooded with centuries’ worth of pent-up nudity, sex and anything previously deemed ‘immoral’. Radical productions were drawn to the Roundhouse, from Peter Brook’s groundbreaking ‘Themes on The Tempest’ (where Prospero swung from four-metre-high scaffolding) to Living Theatre’s ‘Paradise Now’ which inspired the audience to disrobe and lead a naked conga down Chalk Farm Road. A year later, MPs got in a froth about Kenneth Tynan’s ‘tasteful pornography’ sketch revue ‘Oh Calcutta!’, calling for the House of Commons to condemn the show. Obviously it sold out for weeks.

5. Punk crashes on to the scene

Unsurprisingly, it was the Roundhouse that played host to The Ramones’ first UK gig in 1976. Although they were only supports (to The Flamin’ Groovies), the visiting New Yorkers showed a core group of nascent punks and scenesters the cheat codes to future punk greatness. As punk quickly bloomed, so the Roundhouse responded. The Stranglers went from supporting Patti Smith to playing a five-night residency in the same year, while post-punks like Blondie and Adam And The Ants played in later years. In 1983 the venue was forced to close, and didn’t officially open again until 2006.

6. Michael Moore sticks it to Sainsbury's

Off the back of his 2001 bestseller ‘Stupid White Men’, American left-wing firebrand Michael Moore was a totemic figure for those identifying as anti-Bush, anti-gun and anti-corporate on both sides of the Atlantic. It’s no surprise, then, that Moore found a home at the Roundhouse, appearing for a sell-out run of spoken-word shows in November 2002 while the space was being used as a temporary venue. For his troubles, he received a death threat from a far-right group. In keeping with the anti-corporate vibe going on, Moore finished every show by asking punters to snap their Sainsbury’s Nectar cards in half. Which they did, amazingly.

7. Blizzards of glitter herald a rebirth

Torquil Norman, the 6' 7" man behind tiny ’90s toy Polly Pocket, committed £30 million to the Roundhouse’s renovation, leading to its relaunch in 2006 as a multi-purpose venue. The new version was miles away from the filthy, anarchic health-and-safety hazard of the ’60s, but its maverick ethos remained: the freshly painted walls and clean floors were soon christened with blizzards of glitter and confetti and high-flying acrobatics courtesy of an Argentinian circus crew. Their new show, ‘Fuerzabruta’, was an ecstatic and breathless bombardment of visual joy.

8. Prince plays a secret gig – his last in London

Prince’s last shows were spontaneously announced, often only accessible to those prepared to queue and, therefore, really, really special. His final London gig was at the Roundhouse in 2014 as part of the Hit and Run Tour, and like the renegade he was, he blasted through the hits and the venue’s curfew. These weren’t merely ‘gigs’, they were ‘happenings’. Perfect for a countercultural hub like the Roundhouse – a venue that’s never been square.

Arena: The Roundhouse - The People’s Palace is due to be on BBC Four later this month. The Roundhouse will also launch a crowdsourced history microsite this month in celebration of the anniversary.

What's on at the Roundhouse? 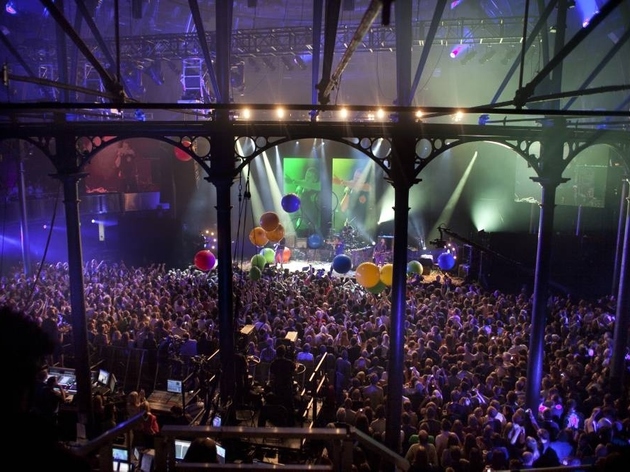 Work on the extensive overhaul/refurbishment began in 2004 and it reopened in 2006 as a modern arts and mixed-media performance space with strong community bias. The main room benefits from a high domed ceiling and Victorian metal 'ribs' and regularly accommodates a staggering variety of acts, from A-ha to Bebel Gilberto, Foo Fighters and Paul Weller.